Alice and the Caterpillar 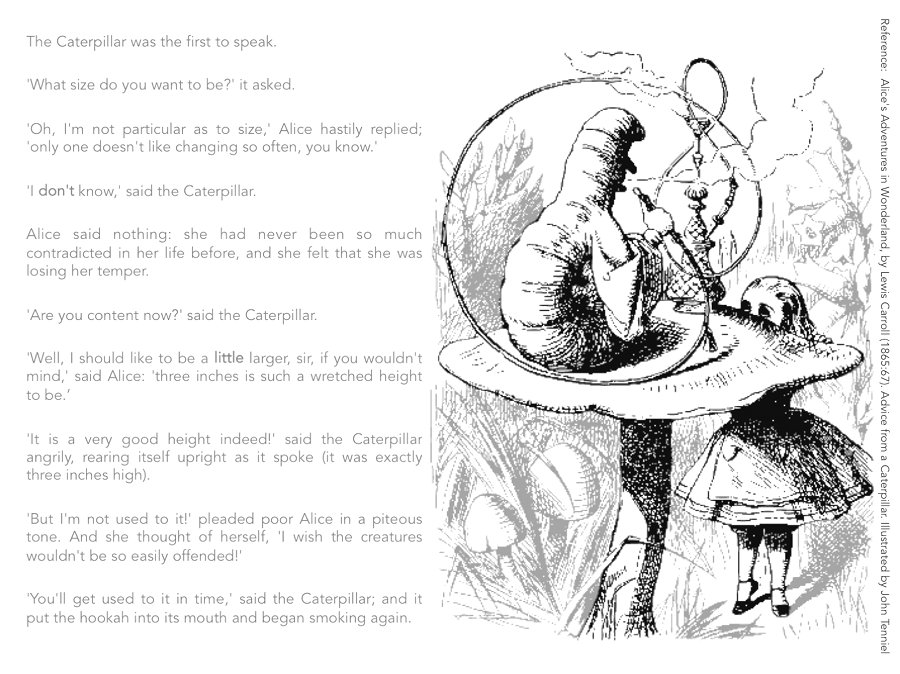 It was soon that Alice found herself in front of the Caterpillar again. Instead of waiting patiently first for him to speak, she ventured a step forward to the mushroom where he usually sat, in a swirling cloud of smoke.

“Caterpillar, I think I can answer your question now on who are you?”

“I know who I am, there is no need for you to tell me.” The Caterpillar replied indignantly, even if with patience.

“I meant your question, to me from fore – who are you?” Alice tried again. The Caterpillar remained silent, and at this point Alice didn’t quite know if it was because he was inhaling on his hookah that he didn’t respond of if he had lost sight of her that he was not responding. “It is not the question of who are you, but what are you actua –”

“Then you haven’t got an answer to the question I asked of you. What is not the same as who.” The Caterpillar was swift to cut in on Alice.

“Yes, but I thought if you answered the what, you will eventually get to the who.” Alice replied, continuing in a hurry, “Besides your focus from fore was on you.”

“There is no need to focus on me, I know who I am.” And the Caterpillar fell silent again. Alice was just about to roll her eyes backwards, making a turnaround to go when after puffing out a cloud of smoke the Caterpillar continued, “So, who, or what, are you?”

“I’m borderline, Sir. Between a what and a what-not, that makes the who that I am.”

“I am not you, Sir, and have no such habits. But don’t worry, you’ll get used to it” replied Alice.