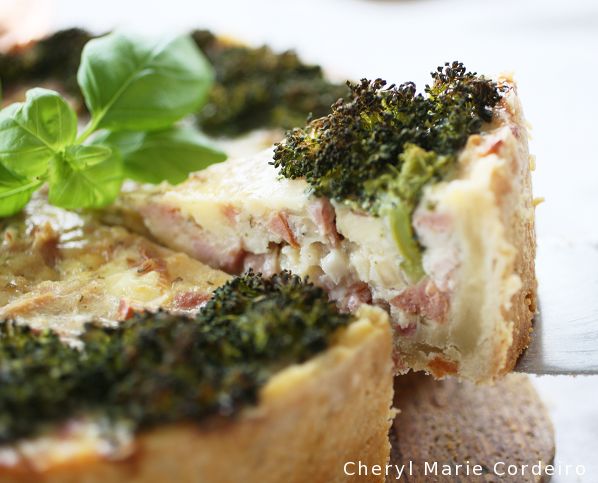 My hobbies are pretty mundane – reading, cooking and dancing. It happens sometimes though that these hobbies get entangled. Like this day when browsing the internet for recipes to the next cooking project, I end up reading large sections of books available partially or wholly online.

My recipe browse for pizza rustica diverted into contemplations on Supernormal: Science, Yoga, and the Evidence for Extraordinary Psychic Abilities (2013) a book by Dean Radin. I have not a clue how I ended up in the realm of studies between materialism, idealism and consciousness when browsing for how to make Easter pies. Still, it was exactly the promise implied in the title of the book – to give evidence for extraordinary psychic abilities – that got me reading some pages of it online. The explicit promise of the title coupled with what I had read then led to me link click through the web for more information since I felt it to be a promise undelivered statistically. I soon landed on a page to a Supernormal book review by Dale DeBakcsy [1]:

“Most people coming to this book are looking for the evidence promised in the title. Unfortunately, they’re going to have to wait,…”

“[Radin] sets out to answer the reasonable question, “If the yoga sutras are a faithful account of the supernormal abilities of the human body, why can’t I YouTube, right now, a hundred videos of yogis making themselves disappear in controlled situations?”

Radin’s answer is that the sutras instruct yoga masters not to show off their perfection of the siddhis, lest it affect their ego. So, they refuse to demonstrate their mastery in order to keep themselves from the possibility of being tainted. This is a curiously selfish thing to do for a being supposedly concerned about minimizing humanity’s suffering. Faced with the opportunity of demonstrating the power of yoga to overcome the thousand natural shocks of fleshy existence, and thereby potentially helping untold millions lead better lives, the yogi chooses to do nothing in order to preserve his personal purity. In the final analysis, we are left with two choices, either the big siddhis are real, and yogis are selfish jerks who value their own magnificent purity over helping their fellow man through maintaining a conspiracy of secrecy, or they aren’t, and these yogis are simply charlatans or charmingly delusional. Either way, it doesn’t look too good.”

Although DeBakcsy’s review is one of many to be read about Radin’s Supernormal (see also [6]), it was certainly one I enjoyed reading because apart from the wit of humour, it contains both positives and negatives of empirical research in the field of academia. Empirical research in the field of parapsychology reminded me of Neils Bohr’s understanding of the ‘observer’ phenomenon in 1928 [2].

The dialogue on the epistemological problems in atomic physics that began in the late 1920s [3] between Einstein and Bohr continued for decades. Don Howard [4], Professor of Philosophy and Fellow, Reilly Center for Science, Technology, and Values University of Notre Dame, in his revisit of the Einstein-Bohr dialogue explains the ‘observer’ phenomenon:

“Now, the quantum postulate implies that any observation of atomic phenomena will involve an interaction with the agency of observation not to be neglected. Accordingly, an independent reality in the ordinary physical sense can neither be ascribed to the phenomena nor to the agencies of observation. …

This situation has far-reaching consequences. On one hand, the definition of the state of a physical system, as ordinarily understood, claims the elimination of all external disturbances. But in that case, according to the quantum postulate, any observation will be impossible, and, above all, the concepts of space and time lose their immediate sense. On the other hand, if in order to make observation possible we permit certain interactions with suitable agencies of measurement, not belonging to the system, an unambiguous definition of the state of the system is naturally no longer possible, and there can be no question of causality in the ordinary sense of the word. The very nature of the quantum theory thus forces us to regard the space-time co-ordination and the claim of causality, the union of which characterizes the classical theories, as complementary but exclusive features of the description, symbolizing the idealization of observation and definition respectively. (Bohr 1928, 54-55)””[4]

Enjoying these reads, it took me some time to get back to the actualising of this pizza rustica, for precisely the reason that this pie is of a very physical system that should it come out of the oven, requires that very elimination of all external disturbances that my cognitive quantum meanderings sometimes disallow. 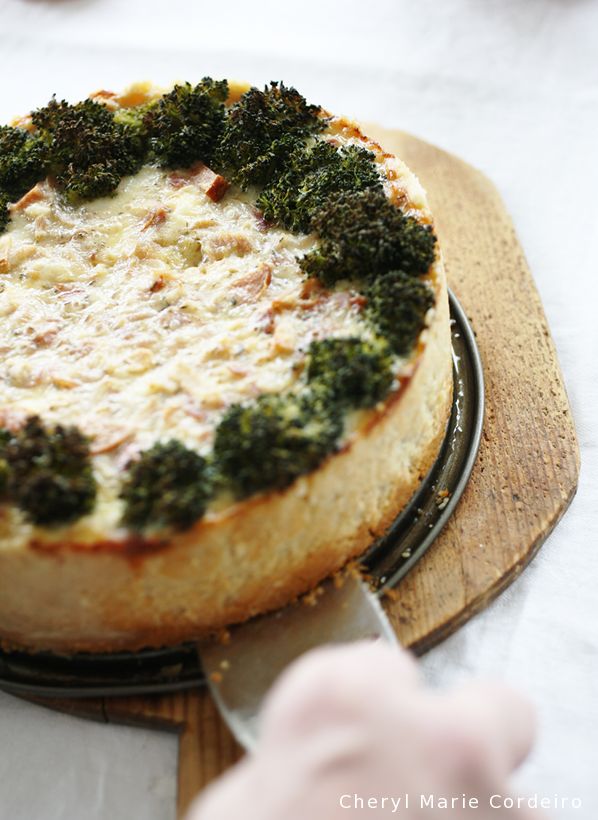 Just out of the oven.

This variation of an Italian pizza rustica, a country pie served at the time of Easter in Italy, is sans lid. In Sweden one might know it year-round as matpaj or lantlig paj in the version of ham and cheese (ost och skinkpaj). This version has one part meat and one part cheese, baked in a 23 inch springform pan. The one part meat could consist of three different types of meats, prosciutto being a favourite. Likewise the one part cheese could contain up to four different types of cheeses, ricotta and mozzarella being favourites for fresh and mild cheeses combined in flavours with a sharp cheese such as parmigiano or provolone picante. Four eggs and some broccoli for the liking. 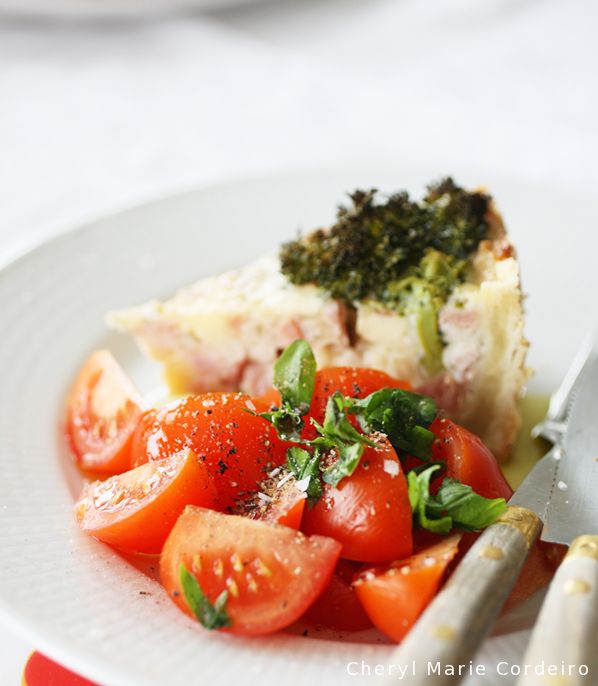 On the side, some tomatoes with crushed basil and sea salt. Drizzled olive oil.

Perhaps it is that meanderings into the literature of materialism, idealism and consciousness makes good entanglement to the making of pie for Sunday mundane baking.

*Dean Radin in 2014 held a talk entitled Was Buddha Just a Nice Guy?”[5] to which he went through some experimental data collected from laboratories on human psychic effects published in scientific journals.