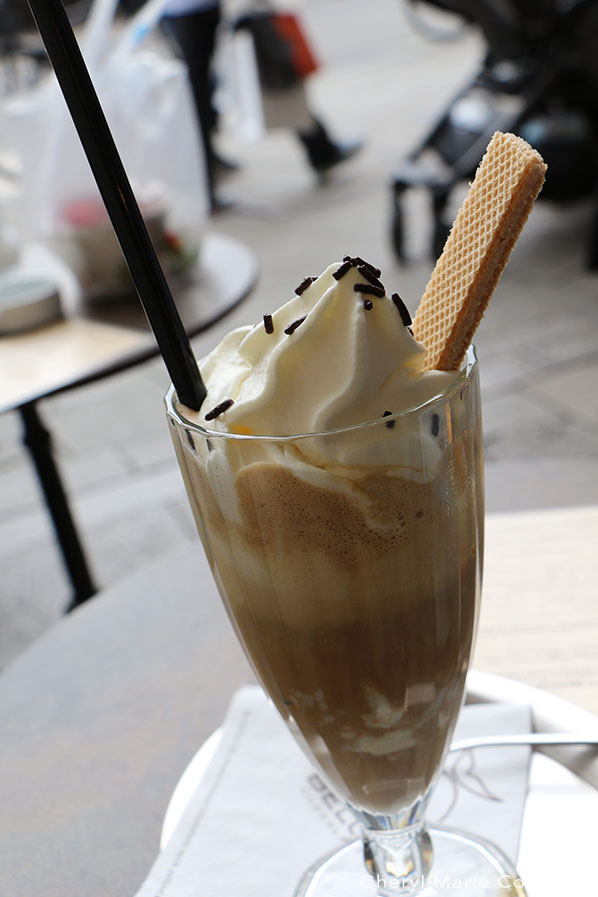 A tall glass of coffee ice-cream and whipped cream from Chocolaterie Beluga is a decadent excuse to being in the corner under the shade at Viktualienmarket, Munich , Germany 2016.
Text & Photo © JE Nilsson, CM Cordeiro, Sweden 2016

Noting St. Peter’s Church located at the Marienplatz in Munich as a point of interest to visit, where it is the district’s oldest church, it was not long before I found myself headed towards the medieval city center of Munich.

Alighting from the U-Bahn at Marienplatz and coming out into the large, spacious city square, I was immediately greeted by the towering Gothic architecture of the Neues Rathaus. Despite summer visits and the ongoing UEFA Euro 2016, I noted with appreciation that the city remained relatively uncluttered of people. 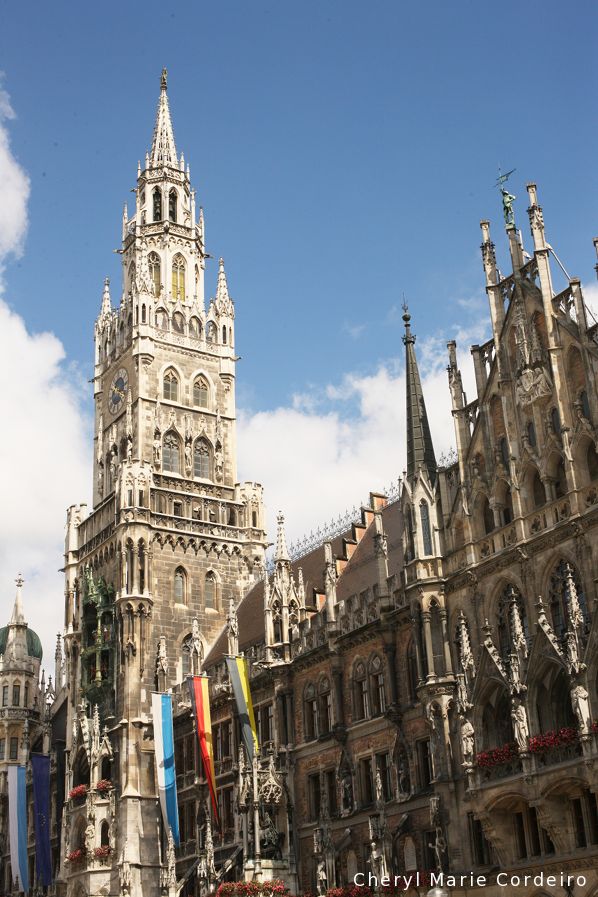 Only a few weeks prior to my visit to Munich I visited the cozy city of Eskilstuna in Sweden, just inland of Stockholm.

Eskilstuna has currently just above 100,000 inhabitants and its history dates back to the Viking era. The city’s name is derived from the medieval period, linked to English monk Saint Eskil, who was stoned to death in the late 1000s by Vikings in the neighboring town of Strängnäs whilst trying to convert them to Christianity.

I was drawn in Eskilstuna to the oldest parts of the city with low wooden houses painted the traditional Swedish dark red, whose roof seemed to contour with the undulations of the cobbled streets and soil that laid their foundation. I was pleasantly surprised to find on display outside of a shop whose premise was located inside one of these low laying houses, an excellently crafted leather corset. It was an outfit looking much like a costume from the set of the TV-series Xena the Warrior Princess (1995-2001).

It was when I rounded the corner from Marienplatz towards Viktualienmarkt, that I was reminded of my recent visit to Eskilstuna, and current living in the city of Västerås, Sweden. The surrounding architecture and city layout had the effect on my mind’s eye of time lateral medieval city visiting, if there were any such thing to be felt and observed. Shops and stalls lined the streets free of cars. They traded in all sorts, but most prominent were foods made and preserved by use of techniques that go back thousands of years. Of my favourite non-food items were handmade brushes, specific to each task at hand, including a tiny cleaning brush for a larger cleaning brush. I couldn’t think of anything more perfect in function than that.

The difficult thing when market visiting is to leave empty handed.

Even if you know you are on a short visit of just a few days, and you know you have in fact no practical storage space neither in accommodation nor luggage for the food items purchased, the urge to live and breathe Viktualienmarkt Munich can be overwhelming. Trade in goods at the stalls is brisk, practical and the prices very favorable. By the last chime of the Rathaus-Glockenspiel at 17.00 hrs, I found my hands full of bags weighted with fruit, cheese and a selection of German sausages that will cause all kinds of trouble while packing for the return trip to Sweden.

The atmosphere of the market itself is robust. The beer garden that it encircles is often relatively full seated with people enjoying local fare accompanied by tall glasses of beer. So it’s difficult to miss the summer festive feeling of the place.

In complement to this summer festive, the thing I found most enjoyable prior to the evening’s swigging of beer with friends or it could well be instead of beer swigging, would be to sit at the corner Chocolaterie Beluga and order your heart’s wishes on all things chocolate. Optimally located in a small alley way between Louis Hotel and the market, you could sit in the shade, out of the way of the marketing crowd and observe life as it passes by in Bavaria, even if only for a few hours in Munich. 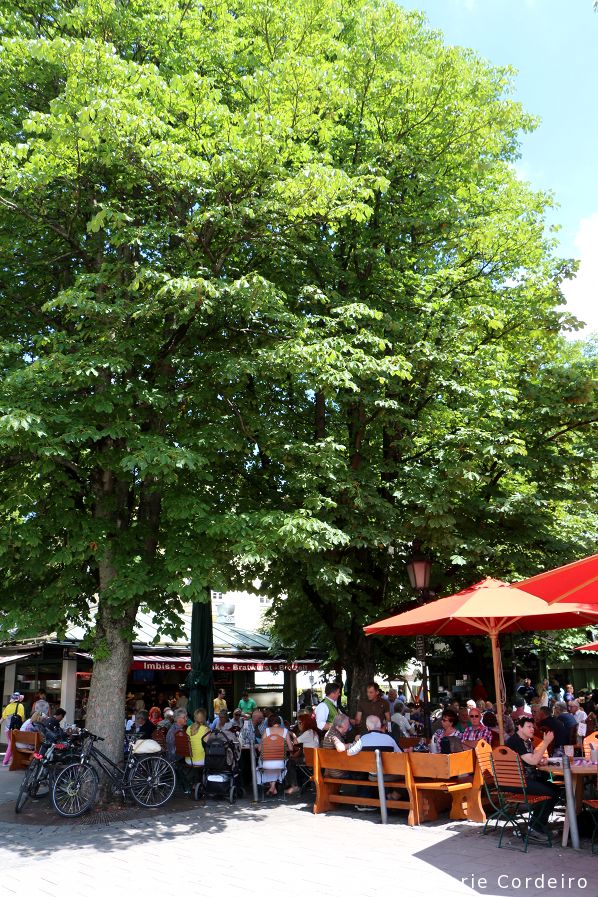 Munich Beer Garden 2016. Even the street lamp is still there. 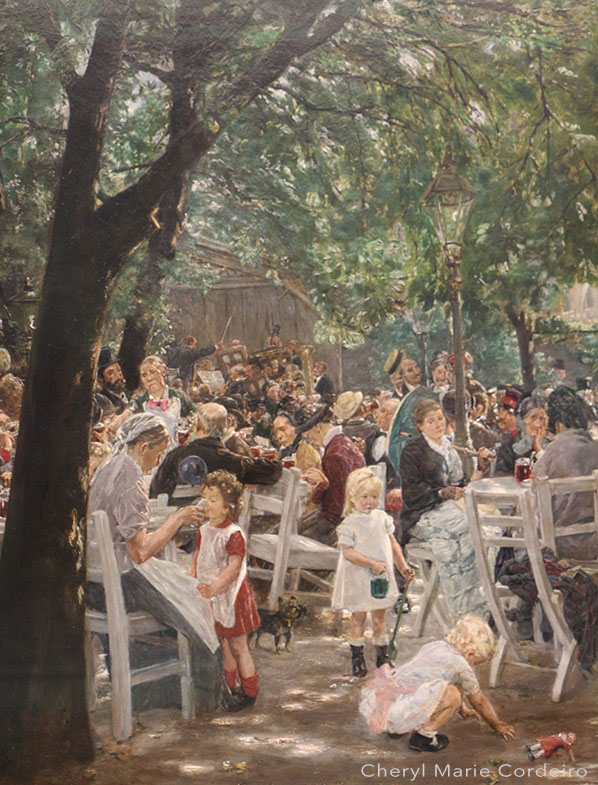 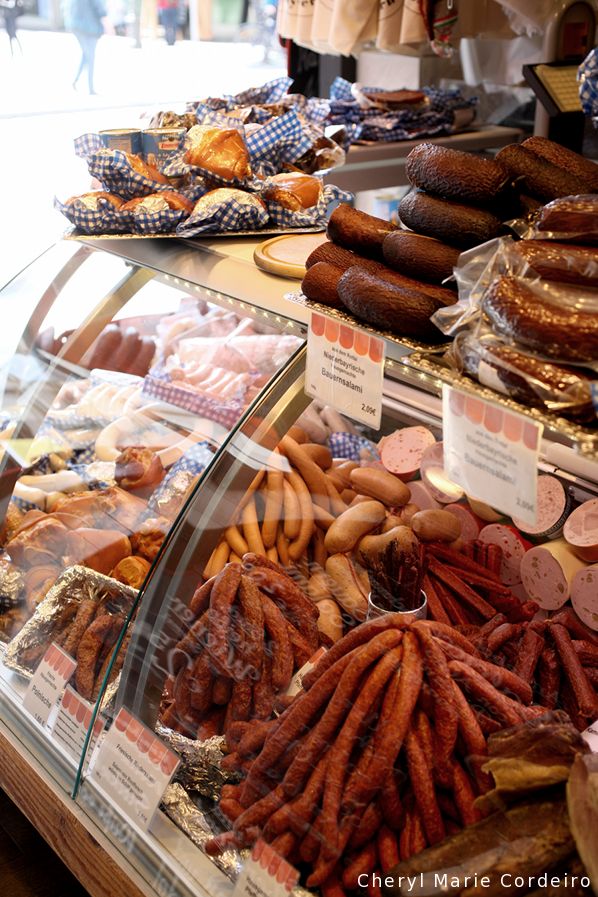 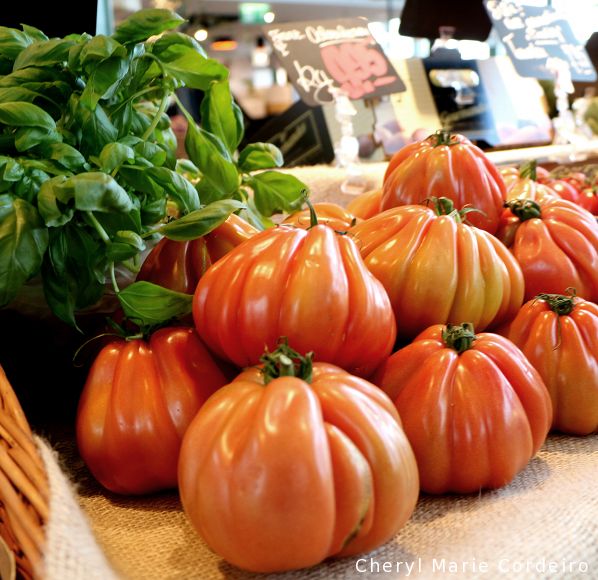 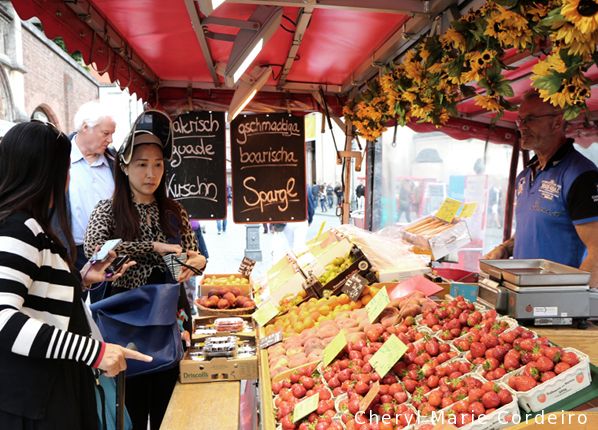 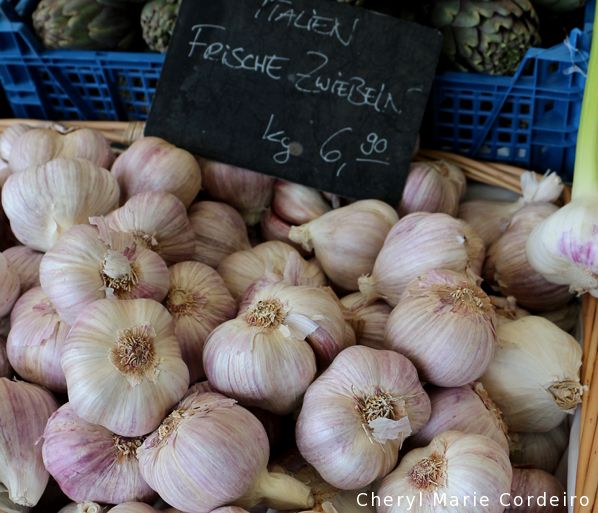 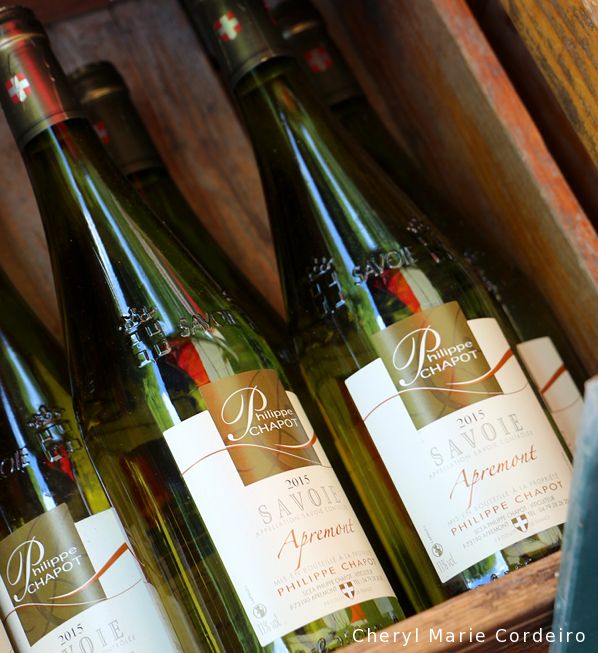 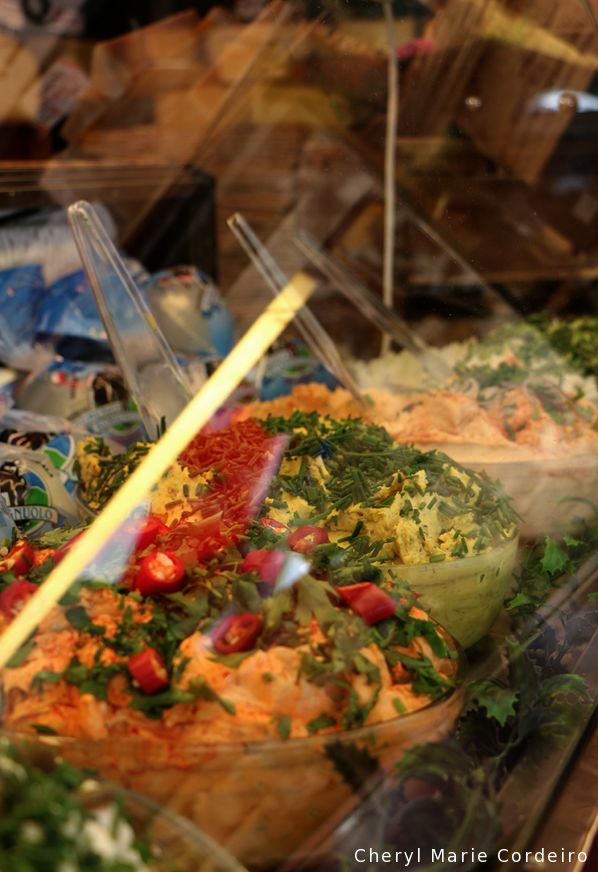 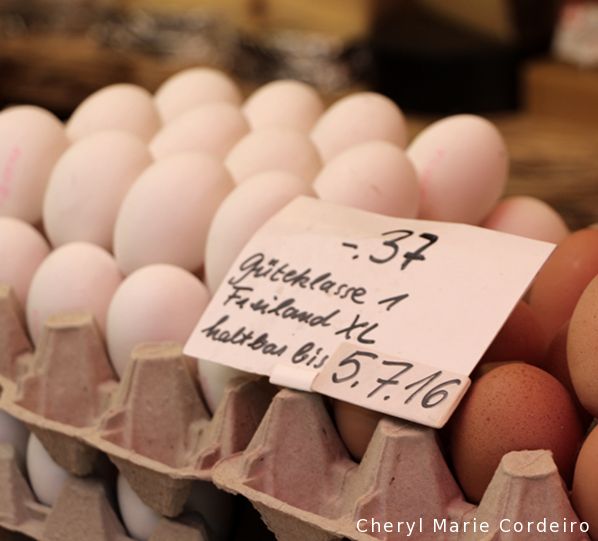 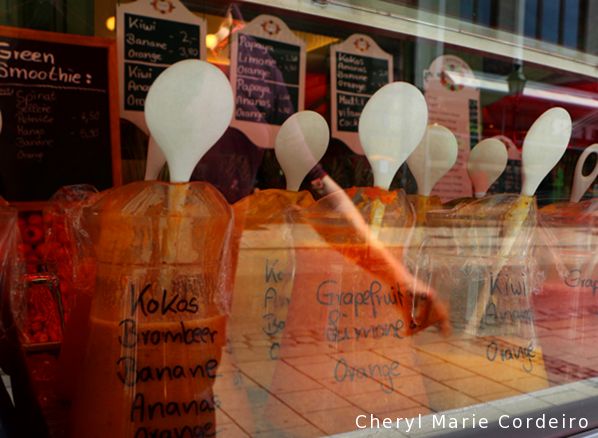 Generous slices of roast pork with crackling, served in a bun. Irresistible. The pretzel, a medieval bread created in 610 by a monk in Italy, is said to symbolize spiritual wholeness in its intertwined and looping shape [1]. The thick soft saltiness of this bread pretzel seems the perfect complement to some of the lighter beers served at the market.

Reference
[1] Bunch, B. and Hellemans, A. (eds) (2004). The History of Science and Technology: A Browser’s Guide to the Great Discoveries, Inventions, and the People Who Made Them from the Dawn of Time to Today.