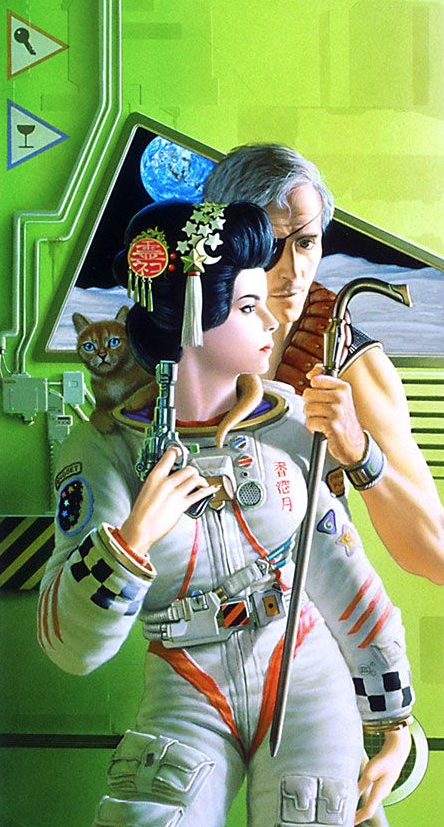 Illustration by Michael Whelan for Robert A. Heinlein’s “The Cat Who Walked Through Walls” (1985)
Text © JE Nilsson, CM Cordeiro, Sweden 2016

In 4170s where Time is iffy, in a R.A. Heinlein world, Madame Pixel attends a court hearing regarding her filing for divorce. Due to that she is of the constellation of Andromeda whose mother tongue is Triangulum, and Mister Pixel is of Barnard 33 of the constellation of Orion whose mother tongue is Flamean, the divorce petition in the Third Way Galaxy Court were filed in both languages, plus a third language, a more formal version of the Third Way Galaxy lingua franca known as Standard Galactic English.

Judge: I am here referring to case number 17V17XIII1.1.1.1. Madame Pixel? In view that Mister Pixel is time travelling, I understand you are attending alone?

Judge: Your divorce request has been evaluated. Due to the condition of Quantum Entanglement, in an undisclosed clausal agreement between you and Mister Pixel, I regret to inform that this falls outside the jurisdiction of the Court.

MPixel: But I, … don’t understand, your honour.

Judge: Your case cannot be addressed by the legal frameworks provided by the Court. Your case has been dismissed.

MPixel: But, Sir, as I understand, it was found in year 5036 that the early theoretical physicists of the 1900s were disproved. In particular, Quantum Entanglement. For all purposes Sir, if one wanted to know if Schrödinger’s Cat was alive or not, one only needed to ask the Cat that question! As such, I would like to file an appeal of reconsideration of petition for divorce.

Surprise registered on the face of the Judge that turned him a characteristic green iridescent sheen, a common reaction of those belonging to the dark nebula in the constellation of Orion. After some contemplation, the Judge continued,

Judge: Alright, but we will now need to locate Lazarus Long, who is foremost expert on this matter I’m afraid. And where he is, we do not know. We’re working on locating him.

MPixel: Perhaps if you located Jubal Harshaw, you might also find, Lazarus Long.