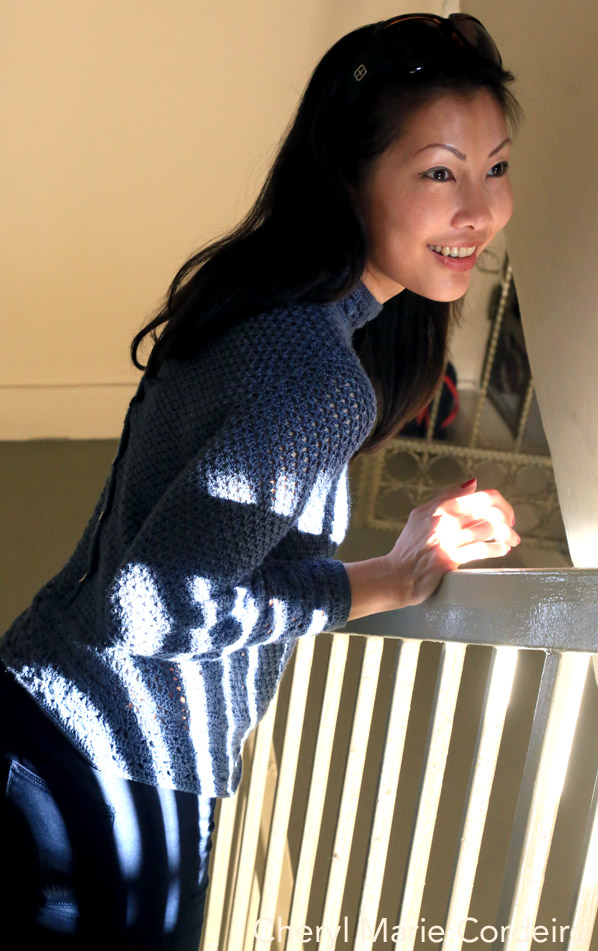 In a 1970s design crochet bell-sleeved top made by my mother, Rita Yong Cordeiro. A small, high-gloss finish wood table with two accompanying chairs standing in the lift landing area of this HDB corridor was what caught my eye. On the table, a tiny glass vase filled with plastic carnations in red.
Text & Photo © JE Nilsson, CM Cordeiro, Sweden 2016

I remember his hands firmly gripping me around my ribcage, under my arms, then lifting me decidedly over two square tiles. He landed me unceremoniously unto a tidied space in the apartment and then went about working again. I was about four years old, and wondered how come he could not just have asked me to hop over two square tiles. The man was a construction worker who was at the time, halfway through tiling the floor to the living room. That was one of the earliest memories I have of watching my parents’ new home, their first Singapore government built HDB (Housing and Development Board) flat come to life. Although not literally the “final stage of [their] housing ladder” [1:195] it was however, a confirmation of a fairly secure economic status reached for our small family, the implications of affording an HDB apartment [2] and observing the interiors of it being built to my parents’ specifications. And it was this during the late 1970s / early 1980s that I was there to have my first look at age about four.

It was soon that neighbours moved in, and the entire HDB building together with its surrounding blocks turned into a high-rise modern kampong. There was a concrete playground just downstairs, and a tiny convenience store run by a man whose family had migrated to Singapore from southern India. From him, I would buy five sweets for 10 Singapore cents, a few days a week after the schoolbus dropped me off along the main road. I would also buy cocoa flavoured Kaka corn snacks from the store, that would make my mid-afternoon snack before dinner. 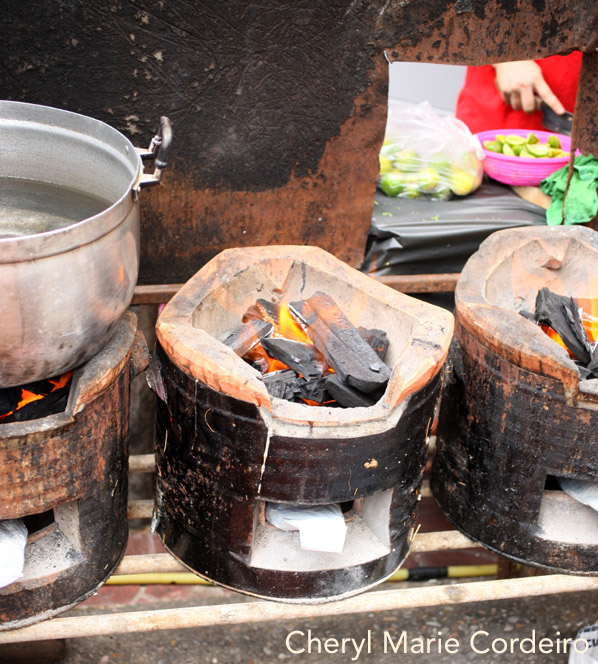 Anglo, charcoal braziers used for cooking that were commonly used in Singapore even in the open spaces at HDB blocks during the 1980s. This was taken on a recent trip to the Chinatown area of Bangkok, Thailand, 2016. The evening crowd was just beginning to stream into Chinatown that evening.

On the fifth floor landing to where I lived in a corner HDB-unit, an elderly lady would sit sometimes with a rattan woven fan in one hand over her anglo, a clay and cement charcoal brazier, upon which she would be making love-letters. The aroma that wafted from a combination of burning coal and baking coconut batter smelled heavenly. I asked her why she made so many and her answer was, “For my chuchu.” Her grandchildren. Her next question was invariably, “Where’s your mama?”

In this visit back to Singapore in November of 2016, I managed to peek into the lift landing areas and corridors of an HDB block and was pleasantly surprised at how much of these small places have been personalised. Many designer rattan woven furniture were placed outside of the apartment units, together with potted plants that created a little garden oasis in the sky.

In the first picture shown above of me standing along a stairway of an HDB block, what caught my eye was a high-gloss finish furniture set made of wood, that stood just outside the lift landing to one of the upper floors. The neat open seats and compact design of the furniture I thought was perfectly suited for the corridor area of the surrounding space. The owners to that furniture set had also placed a glass vase with plastic carnations in red on the tabletop. It was about sundown when I had set my sight on this HDB scene. Bathed in the soft glows of a setting tropical sun, I thought this tiny area, in combination with other personalised living spaces in the building was a welcoming sight for both residents and visitors.