Ayutthaya, the coastal-hinterland kingdom of Siam 1351-1767 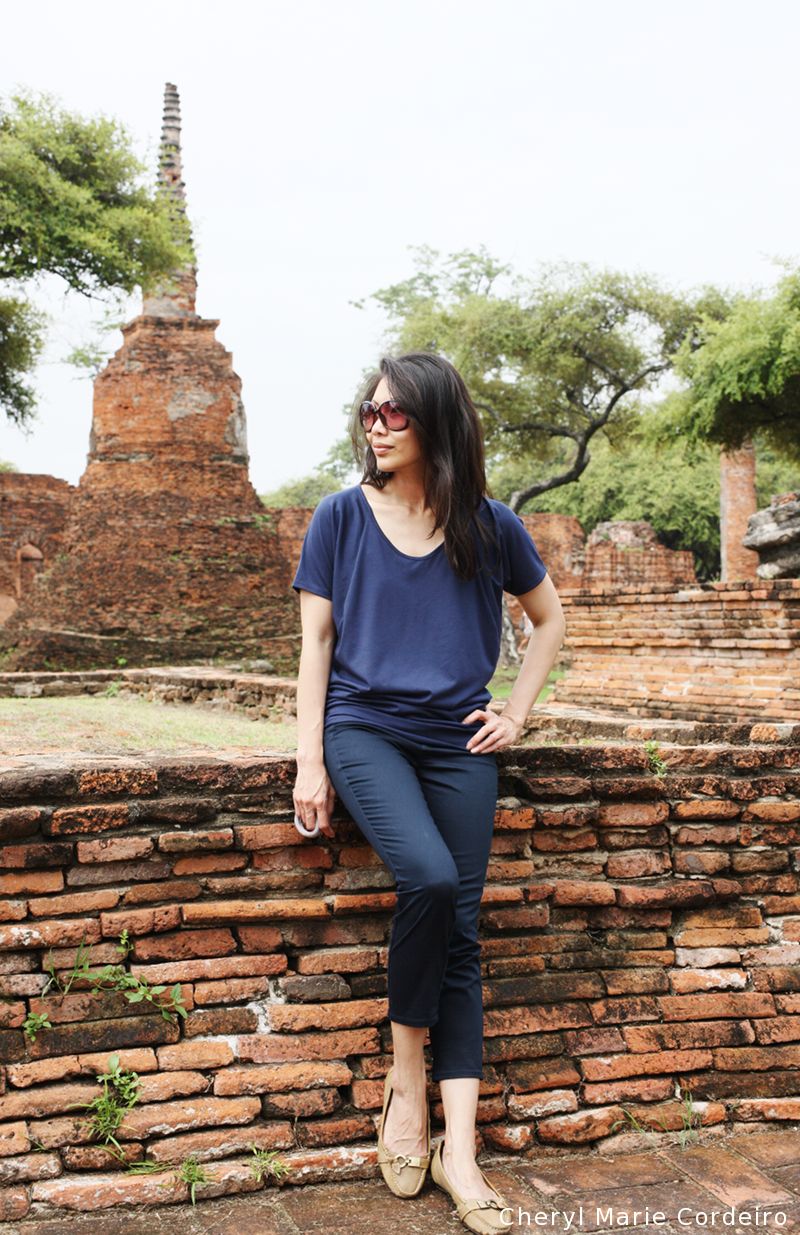 In the swelter of the tropical heat, I stood watching two women carefully position themselves by a banana tree. Placing their arms around the clusters of unripened bananas growing low tipped with a blossom, they readied themselves for a wefie. “Are you Thai?” came the high-pitched holler in my direction from the lady sitting behind the ticketing booth at the entrance of an ancient-modern park in Ayutthaya. I turned to look at her, my expression blank. “Are you Thai?” she repeated. Within two seconds of capturing my continued state of lack of expression, “Fifty baht please!”, was the clubbed reply to the final, full entrance fee to be paid. I stepped up to the ticketing booth and handed over fifty baht and thanked her. It seemed almost everywhere I went in Bangkok, Thailand, people thought I was Thai, except on the occasions of paying for entrance fees.

Ayutthaya is a short drive from the city of Bangkok. We encountered little traffic and our chauffeur tour guide had a standard tourist itinerary all planned that included his own breakfast and lunch breaks in-between. Driving from the city centre of Bangkok out towards Ayutthaya, the landscape and its colours resonate in my mind with Bali, Indonesia. The flat plains that provided the ancient city with riches of the soil perfect for the cultivation of at least two varieties of rice is still there, although one can detect too, a consistent period of drying up of soil with canals filled with sand and grass instead of water. This World Heritage site that attracts up to 3 million visitors in a year, continues to be one of the world’s richest plains for the cultivation of rice that gives Thailand its leading advantage as global rice exporter [1]. The weather during our visit in Sep. of 2016 was warm and humid, with a smattering of rain. It was a little bit of luck that the weather was cloudy on the day of our visit to Ayutthaya, else clear tropical skies with the heat from an uncompromising sun would make it punishing to stroll the ancient city sites.

The historical socio-economic development of Ayutthaya from a convergence port of trade to a cosmopolitan kingdom makes an interesting case to study, much due to as scholars might suggest, that the emergence of the kingdom marked the transition to a new anthropological stage, the baseline of modern history [2:3]:

“the motor of history is a process of increasing anthropological complexity. Trade networks become more complex and populations become more mixed in both economic function and ethnic background, while political forms evolve to manage this complexity. By this process, society moves from household to village (ban) to muang and finally to prathet (state, country) and anachak (kingdom). The emergence of Ayutthaya is a climactic event in this process, the transition to a new anthropological stage, the foundation of ratcha-anachak Sayam – the baseline of modern history.”

Despite that the kingdom was a cosmopolitan trading port, kampong living was of the time, simple and modest. In collected documents associated with the Dutch East India Company (VOC, 1602–1799) kept in the National Archives of Indonesia and the Netherlands of their last Resident Nicolaas Bang and his family, and of the VOC Lodge in the immediate years before the city was sacked, looted and burned by the Burmese, kampong living was described as fairly languid. The kampong lifestyle in Ayutthaya could well resonate with that of Singapore through the 1800s:

“The structures built by the kampong people would have been simple and modest, resembling the housing of locals outside the compound. Was Bang’s house built of brick? Possibly this building material was reserved for the Company’s Lodge. With the exception of the brick-built buttery kitchen and prison, all other structures were built of timber or bamboo and had roofs made of the leaves of the nipa palm (Nypa fruticans); even the warehouse behind the lodge proper, used for storing timber and rice purchased for export, was built of wood. The situation when Nicolaas Bang worked at the Lodge is unknown, necessitating reliance on Heeck’s description from a century earlier. Apart from the brick structures mentioned above, he reported that within the fences of the Lodge, one large and one or two smaller stables housed altogether 10 to 12 horses. Other structures, such as a sheep fold, pens for he- and she-goats, and coops for chickens, geese, ducks, pigeons, and even cranes, also existed. This suggests that the cook could rely on local produce. As was the case with other Company settlements, the Lodge had a garden, “a small one with some pomegranate, orange, and lime trees” that, however, during Heeck’s visit “looked very unkempt and wild.” Stables were reserved for higher employees, as Heeck notes: “Stabled here were some ten to twelve horses of various colors, on which the gentlemen often go out riding during the dry season”; “they were of reasonable quality, though somewhat small,” he added.49 The horses were pos- sibly imported from Java since the Siamese King sent a ship to Batavia annually to buy horses bred around the Javanese court city of Kartasura.” [3:315-316]

Even if what is left today would be perceived by many visitors as piles of bricks charred and laying in some form of disarray, standing at a high point atop the ongoing German Wat Ratchaburana Safeguarding Project [4], conservation efforts of the Buddhist temple in the Ayutthaya Historical Park, it is not difficult to imagine the life that once was hundreds of years ago with roads, river tributaries and canals that facilitated the movement of goods and people.

It was the awareness of a waiting tour guide that brought us down from the view at Wat Ratchatburana. He reminded us that we had not quite followed his planned itinerary for us, and though it was not in the nature of Thai culture to display anger or frustration at visitors to their country, he did have daily practicalities to take care of and would like to be back in Bangkok city before the evening rush hour traffic. Next on the list was an elephant ride. We smiled politely, and agreed to follow-up on this itinerary if only to say hello to the large animals. “Are you Thai?” was the welcome greeting in my direction at the elephant ride ticketing booth. I shook my head in response, but also mentioned, to the chagrin of both the ticketing booth lady and our tour guide, that we would be happy to walk with the elephants for some of the way on their elephant ride path, whilst making our way around the fields of the area towards the principal stupa of the field. 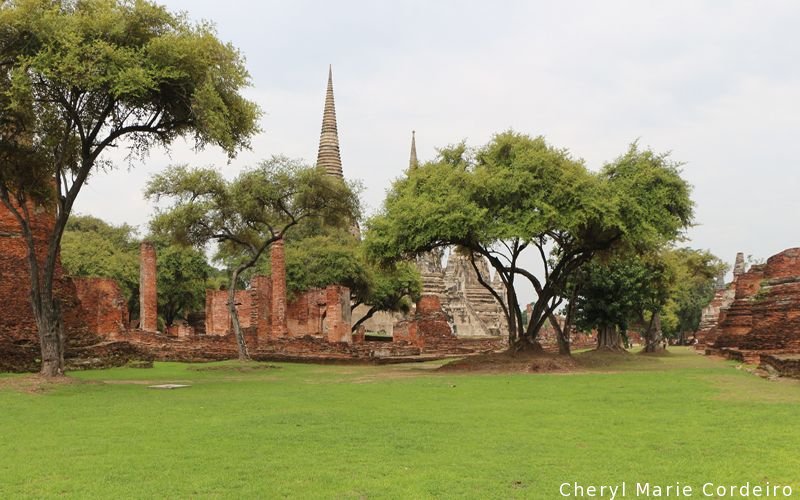 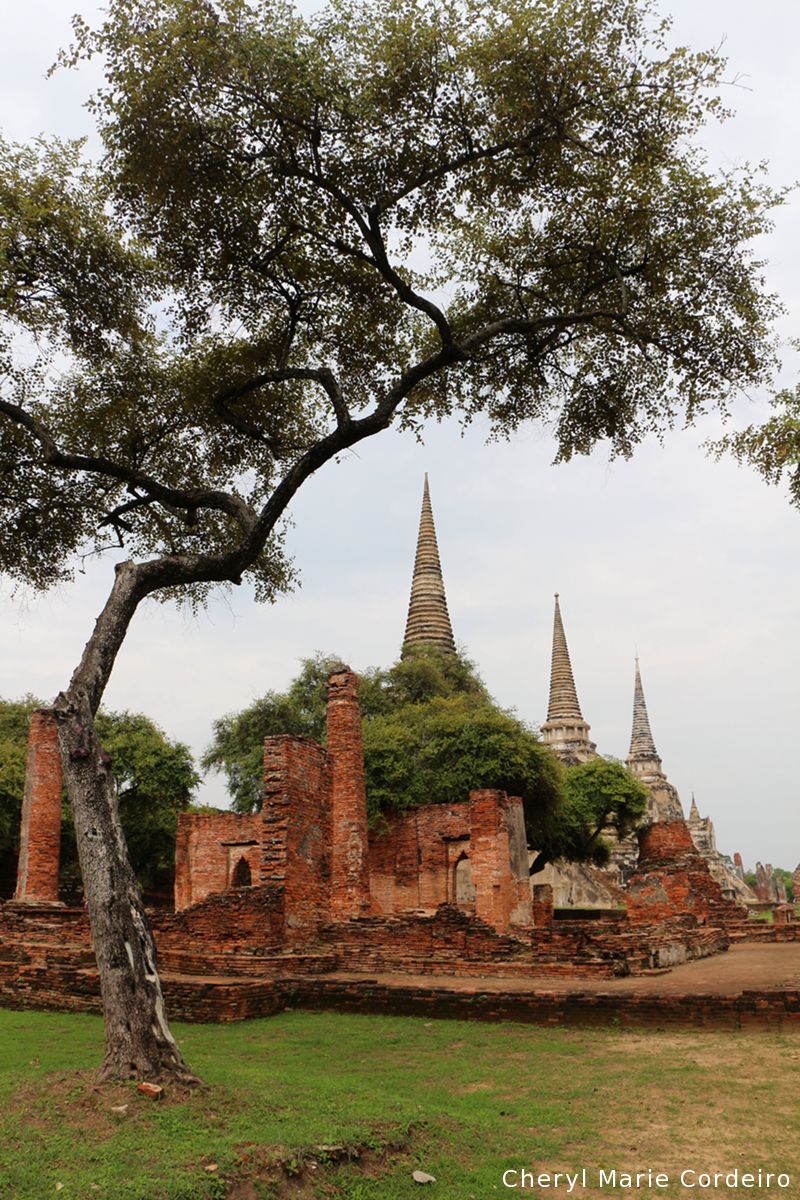 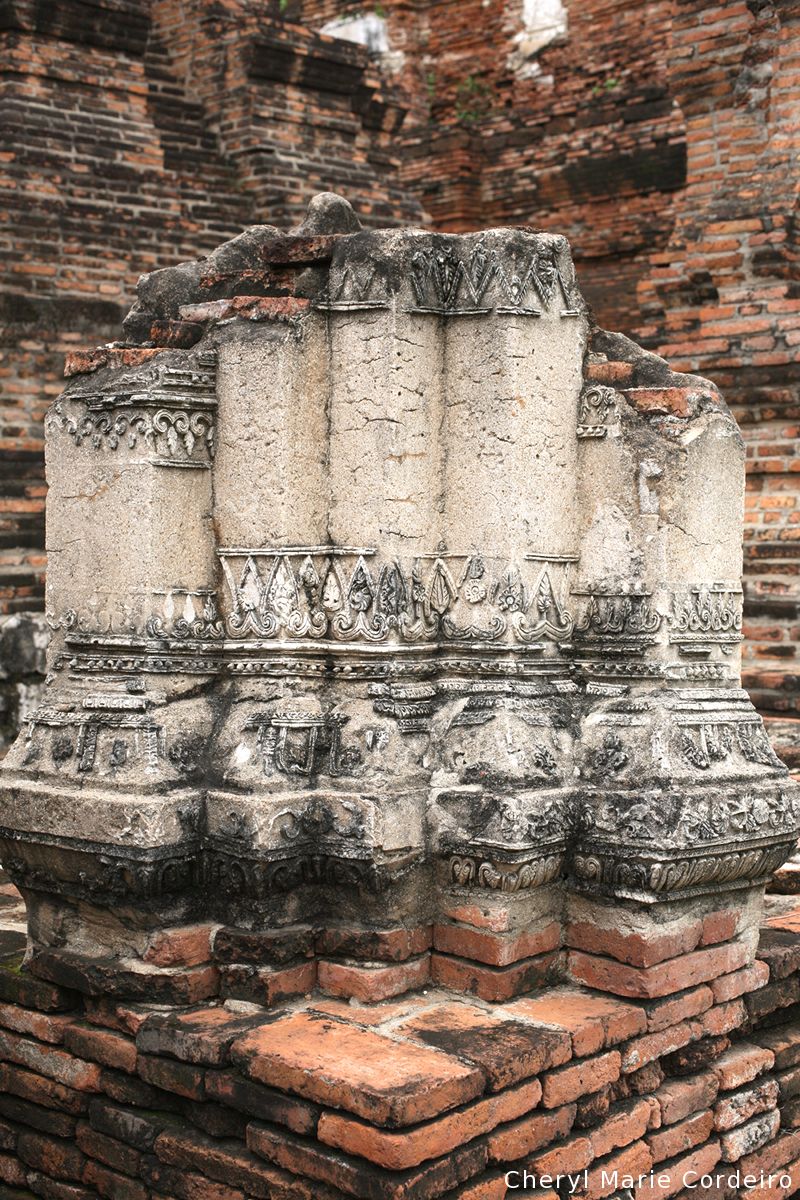 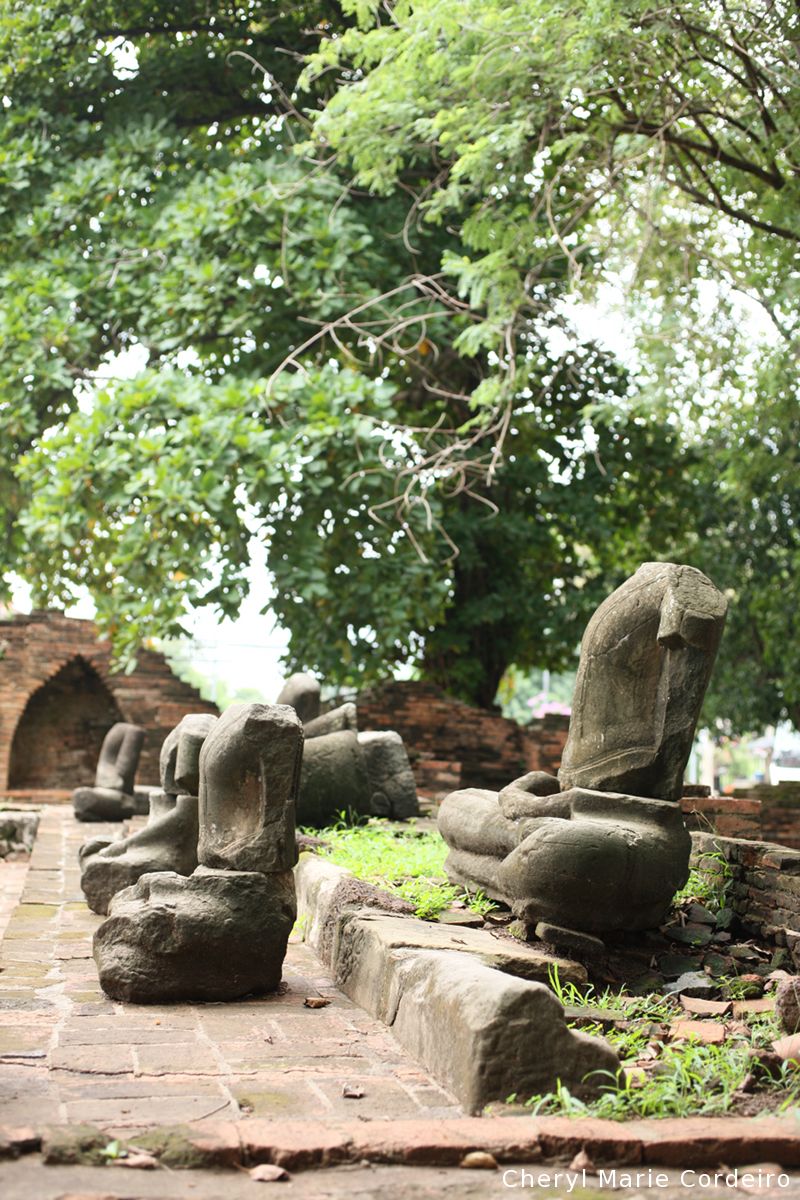 Wat Mahathat, Ayutthaya, Thailand, 2016. This city was once known as the Venice of the East, quickly evolving to become both a hinterland and maritime kingdom not long after its founding in 1351. By 1500s, the city was described in a book by Tomé Pires “The Suma Oriental” (1512-1515:104) as cosmopolitan with settlements of “Arabs, Persians, Bengalees, many Klings, Chinese and other nationalities”. Walking through Wat Mahathat today, with its compounds filled with Buddha statues without head, left an indelible impression. 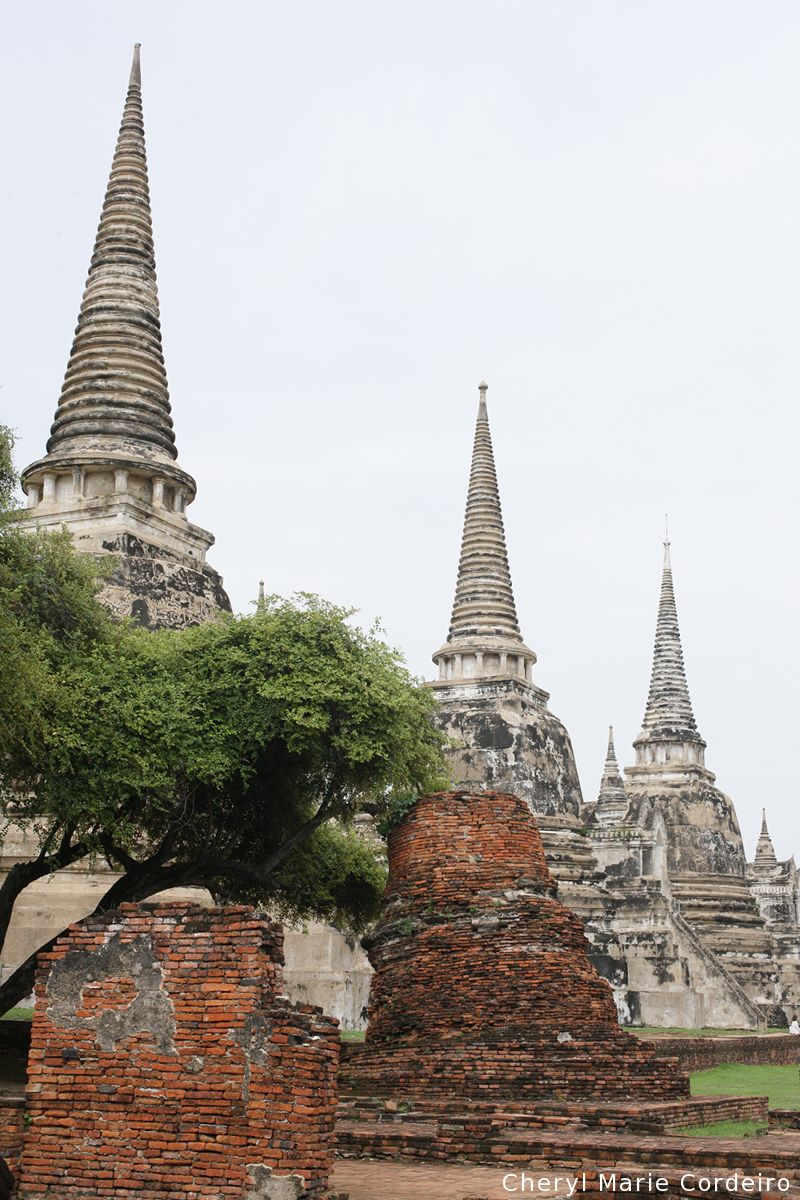 Wat Phra Si Sanphet. Used exclusively for royal ceremonies, this was the grandest temple built on the Royal Palace ground in Ayutthaya. It took four hundred years thereabouts for this landmark to rise as symbol of human distinction and endeavour. It took less than half the same time to fall into its present state of decay after the Burmese invasion. A monk, climbing to a high point on Wat Ratchaburana in the Ayutthaya Historical Park. The scaffolding are part of the UNESCO German Wat Ratchaburana Safeguarding Project (GRASP) conservation effort launched in 2011. 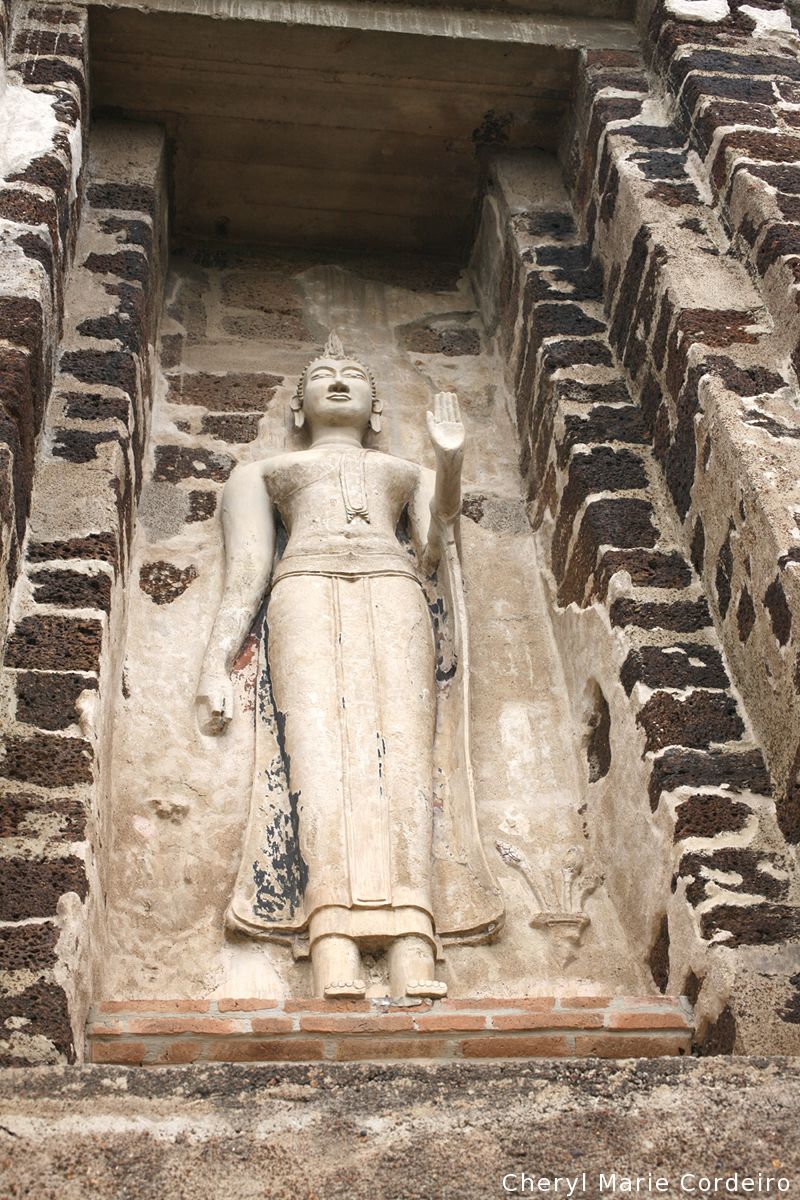 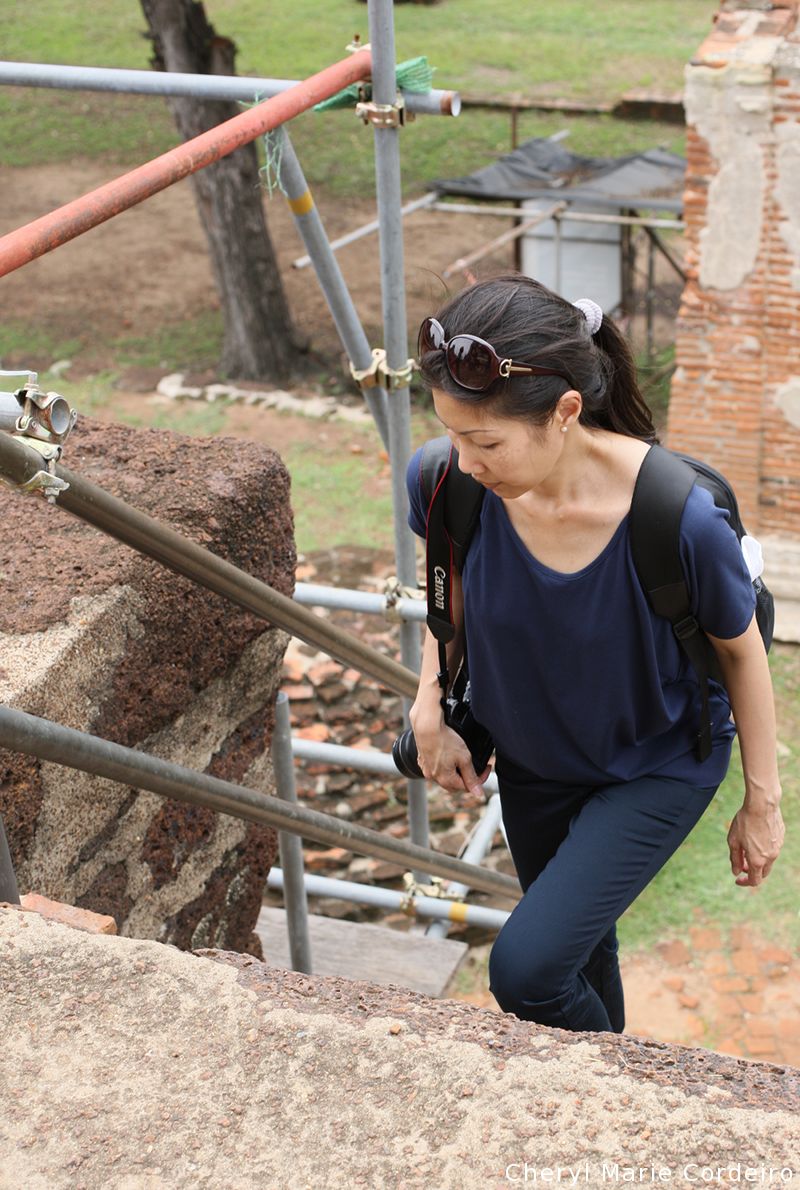 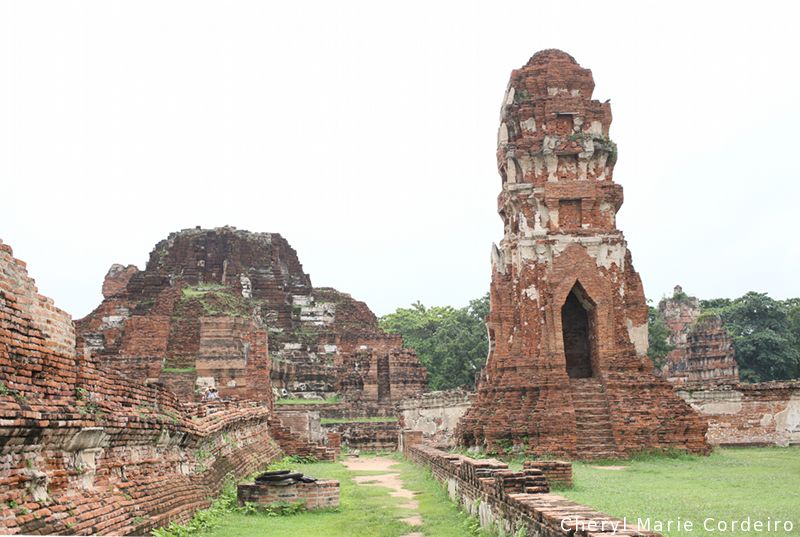 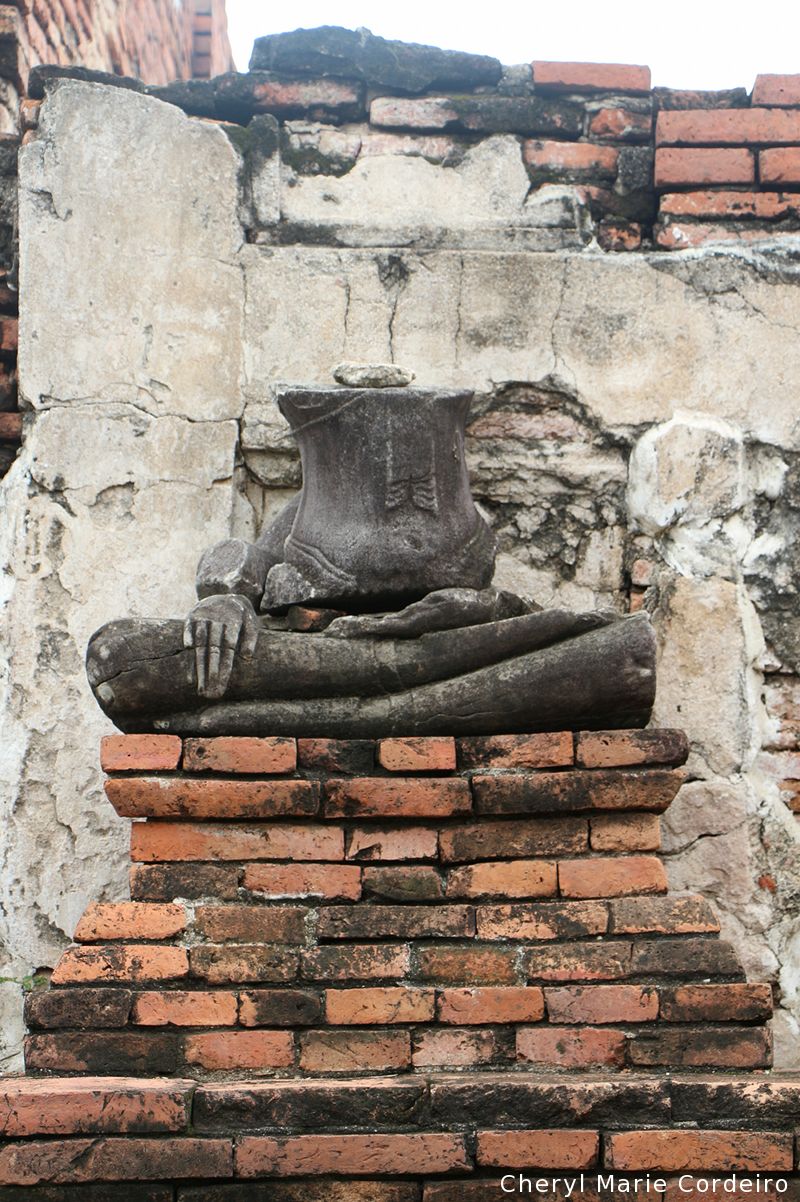 A principal stupa in bell-shape, originally decorated with elephant sculptures at the foundation. This stupa is similar to the principal stupa at Wat Maheyong, Ayutthaya, Thailand.