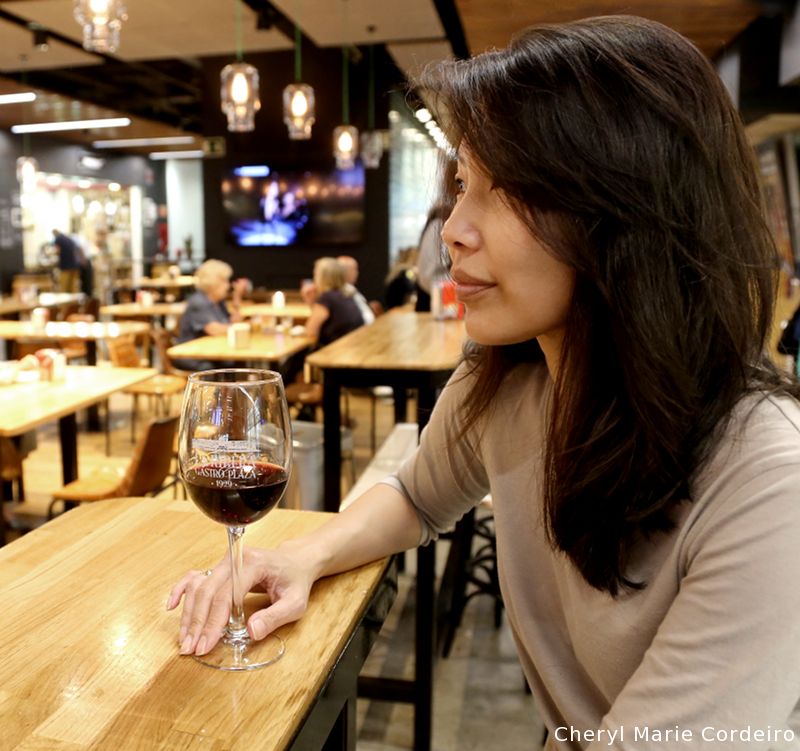 I sit in the shared dining space of the stalls of the market place at the Mercado de la Ribera, Bilbao, Basque Country, Spain. The glass of deep burgundy Viña Real Crianza 2014, is a wine made in the region just south of Bilbao.
Text & Photo © JE Nilsson, CM Cordeiro 2017

I resesarched the weather forecast ahead of landing in Bilbao, a city located north of Spain in the autonomous Basque region, Bay of Biscay. It was advised that the days in Bilbao during the RESER 2017 conference would be rainy and I should bring an umbrella. I had not however read up too much on the culinary scene of Basque Country Spain. I assumed it would be plenty of tapas, sangria and wines, perhaps much like that to be found in Barcelona, when I was there for the International Faculty Program (IFP) 2011 program at IESE Business School. I was pleasantly surprised that it was not so much tapas as pintxos to be discovered as a social event with the intention that one could move from eatery to eatery, exploring in one evening, different atmospheres of different places*. If living in Bilbao or Basque Country Spain in general, I would expect to slow down the nomadic pintxos eating, taking one place for one evening at a time, if not making your own creative version at home. And instead of sangria to the food, Txakoli, a very dry white wine produced in the region, was suggested as accompanying drink to pintxos.

During the nineteeth century, traditional traders of the Basque region in Spain had limited choice of products in terms of grocery, textile and hardware. Goods sold were mostly self resourced and crafted. About a century later, as influences from the industrial system filtered through from Basque provincial cities to the surrounding areas, traders would slowly convert into ‘shopkeepers’ or dealers in manufactured goods. Basic food items began to be stored and purchased in stores in the larger cities due to the processes of urbanisation and a steady moving away of subsistence living, but the proximity of the agricultural and inshore fishing communities enabled food to be sold directly from producer to consumer [1]. Today, the resulting economic efforts of these activities are reflected in the weekly markets found in the provincial cities. In Bilbao, the proximity and (enviable) immediacy of trade from producer to consumer is seen in the workings of the Mercado de la Ribera, a market that sells pristine raw produce whose stalls stand in a shared arena with bars and restaurants.

In terms of Basque signature cuisine, there are two places that I became acquainted with over the days spent in Bilbao. The first is the vibrant Mercado de la Ribera, the second is the urban chic Plaza Nueva, a large square that was built during the 1800s, whose arch ways house bars and restaurants that serve competitively creative pintxos.

As a sidenote on Bilbao city culture, a phenomenon observable in the city but most striking around the area of the Plaza Nueva is how the locals love bringing their pet dogs out for walk and play sometimes unleashed. The people are dog proud in the city, as evidenced by the giant Puppy by Jeff Koons [2] on display near the entrance of the Guggenheim Museum Bilbao. If you live by the park or find yourself in a large open space such as the Plaza Nueva, you’ll be sure to come across some marvellously groomed dogs, large and small, an indication perhaps of urbanised social living that incorporates the love of agricultural pasture or land for the company and keep of animals. 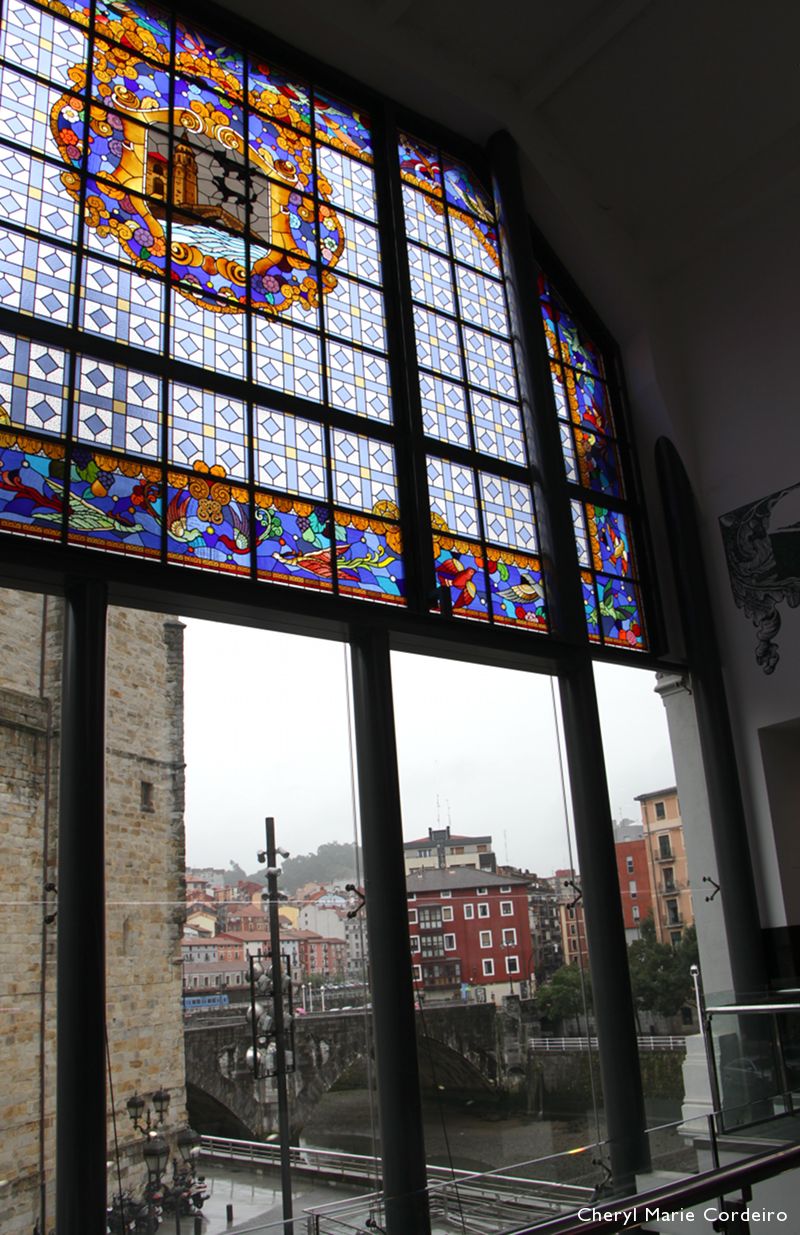 A view from the second floor of the market, framed by the facade of Iglesia de San Antón, only partially shown in the photo to the left, overlooking the waters of one of the estuaries of Nervión. 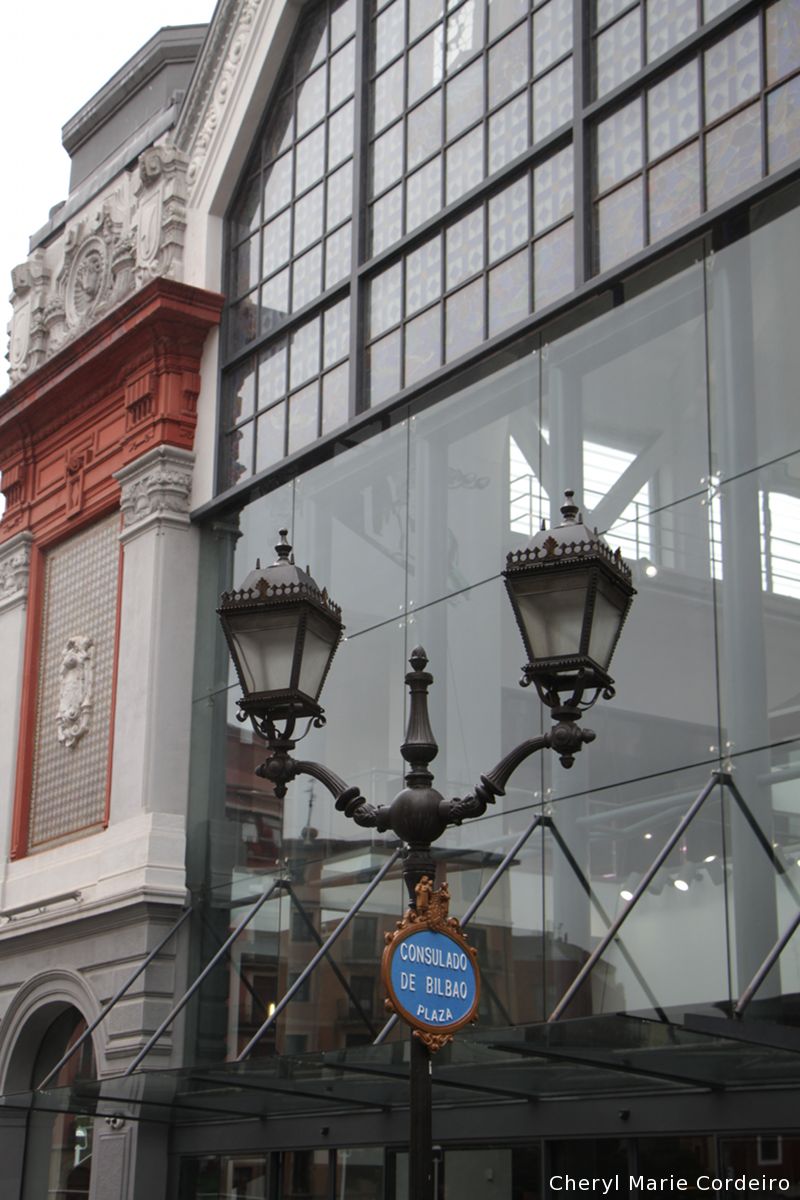 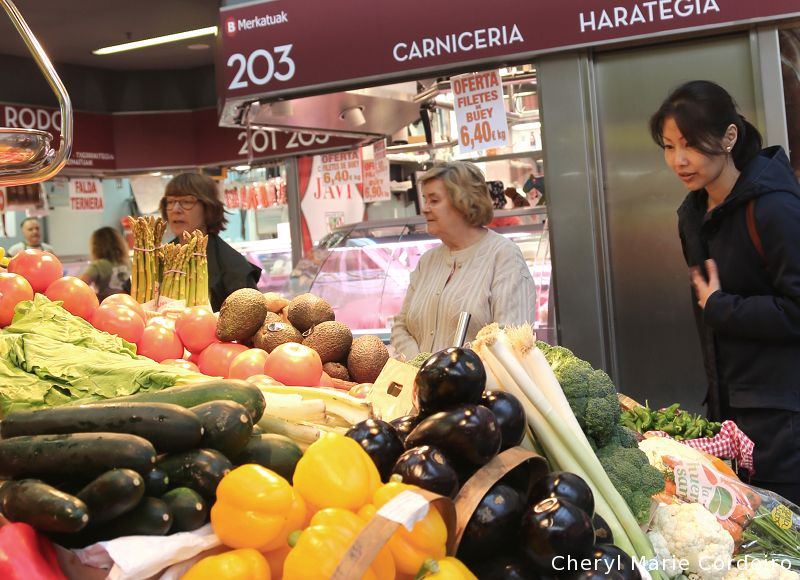 The produce of the stalls of the Mercado de la Ribera are impecably displayed. In this fruit and vegetable stall, what is most of all conveyed, apart from their untainted goods, is their respect and love for the harvested goods. 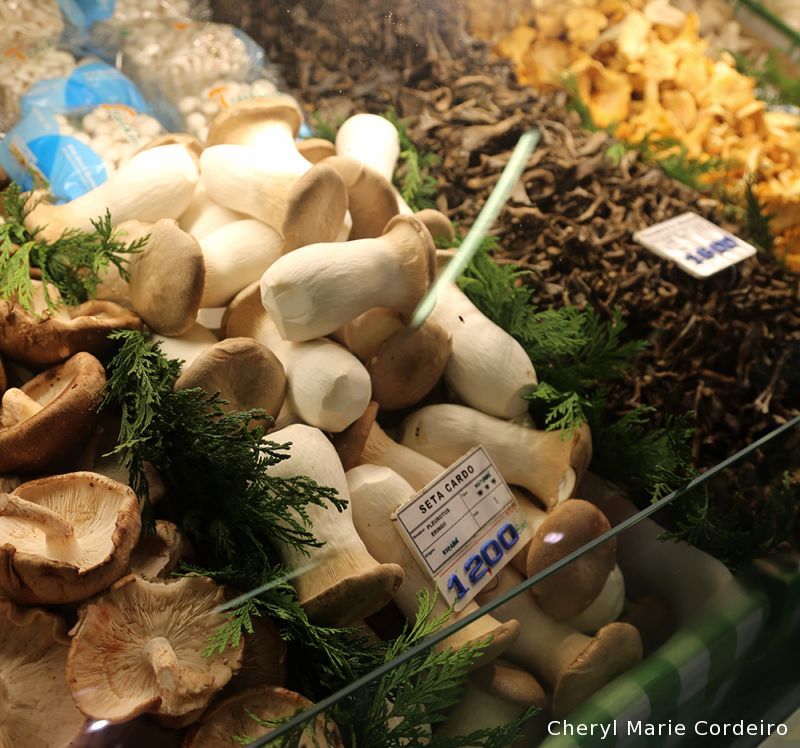 Sourced from the region, Basque food is famously seasonal. The months of October and November in particular, experience high precipitation in the northern part of Basque Country, Spain. The variety of mushrooms appearing at the stalls signal the arrival of wetter autumn months. 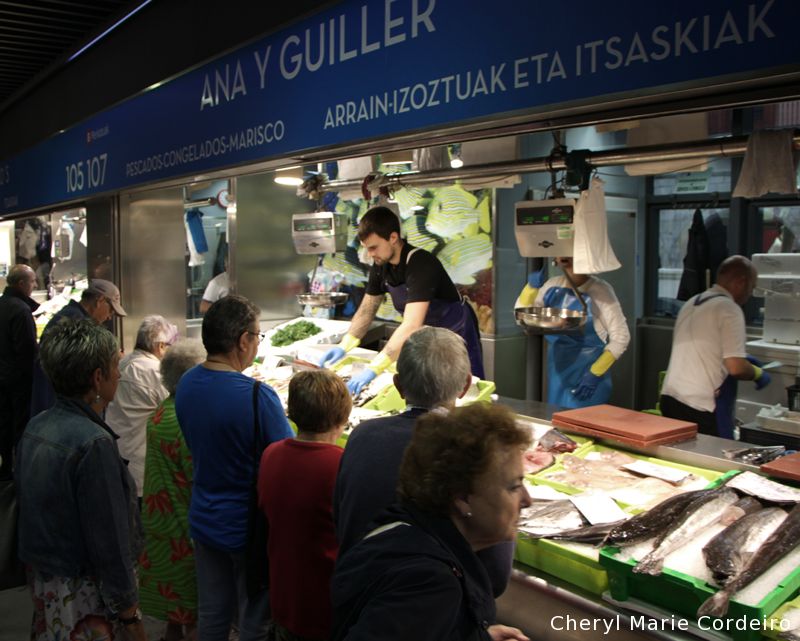 A market fish stall. Located near the Bay of Biscay, Basque Country has much of its staple in seafood and shellfish of different kinds. Simply beautiful.
The culinary and life philosophies of the Basque Country people of Spain, displayed in the manner in which the produce are treated at this market. 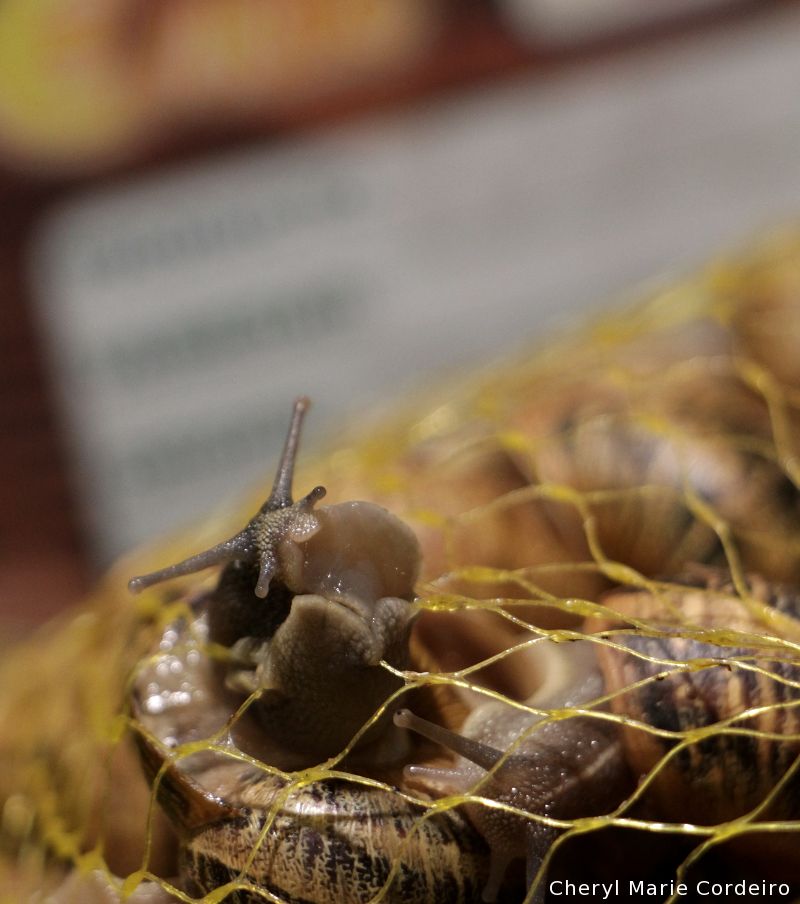 I am however, uncertain if this little one and community in the bag would agree with me on being culinary pick of the day. 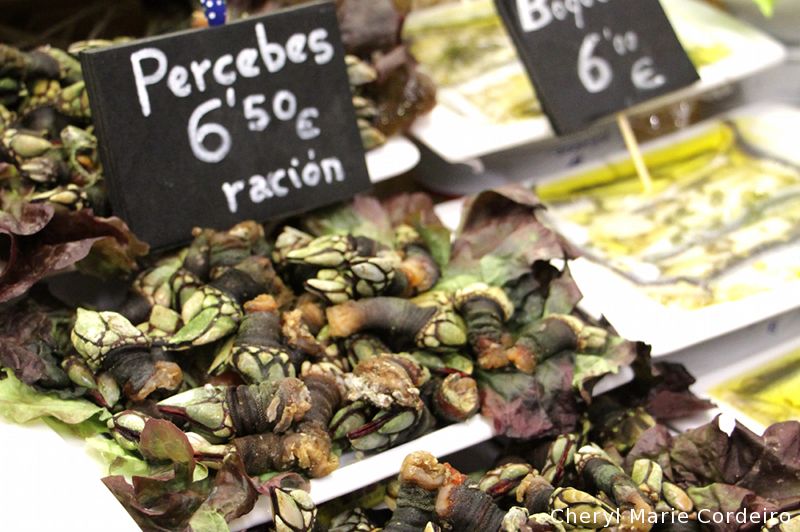 Percebes or Goose barnacles.
I had until this day, not known about percebes as food. Trecherous to harvest along rough watered shores, these clean environment loving crustaceans make for luxurious food. 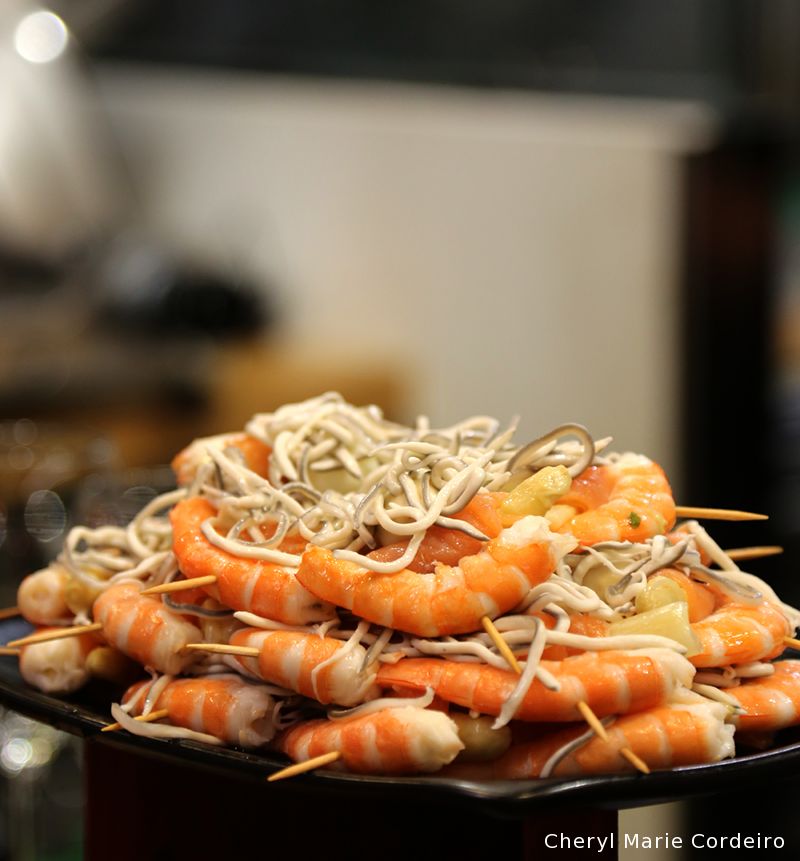 The word pintxos, that I had initially thought translated to ‘pinch food’ in English, actually refers to the skewers or toothpicks that are used to keep the food together. Here, shrimp and angulas pintxos. Angulas are young European eels, silvery white in colour, that remind me of a thinner, longer form of young anchovies that are nearly of the same translucence, sold in the wet markets in Southeast-Asia. 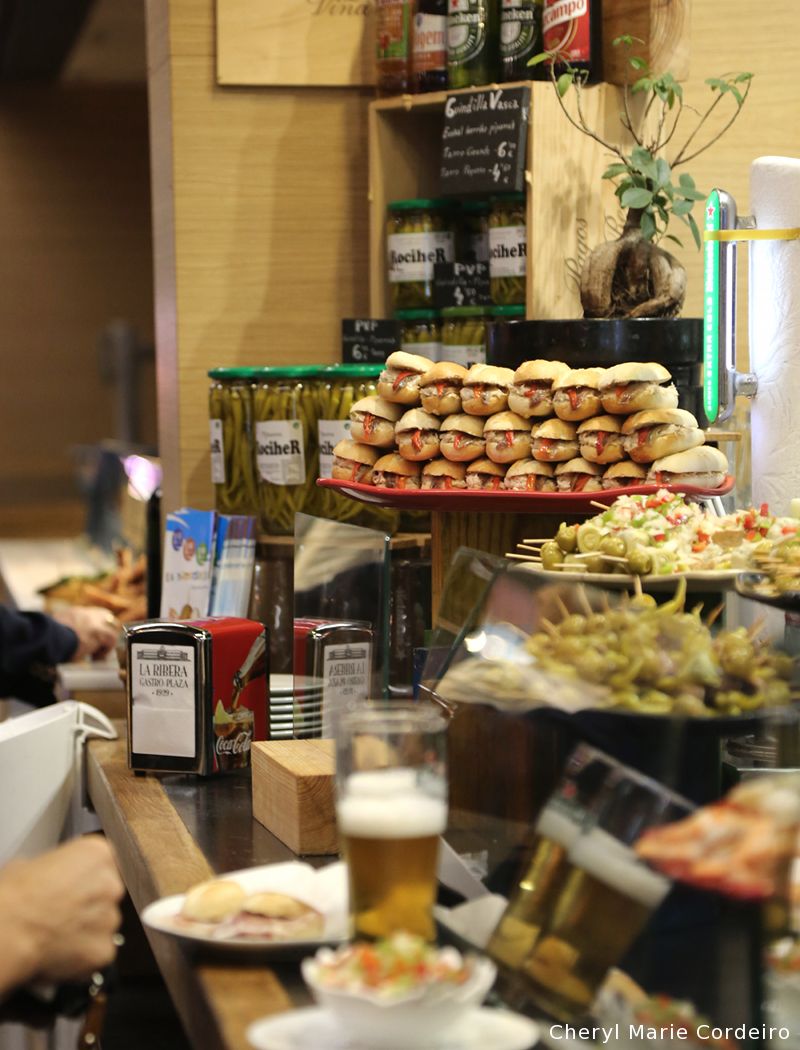 This vintage wine, Viña Real Crianza 2014 [3] is made from grapes of the Rioja Alavesa province, located south of Bilbao. Viña Real wines were launched in 1920. This wine is 90% Tempranillo and 10% Garnacha, Graciano and Mazuela. The grapes are harvested and processed by hand and is considered one of the region’s signature products. 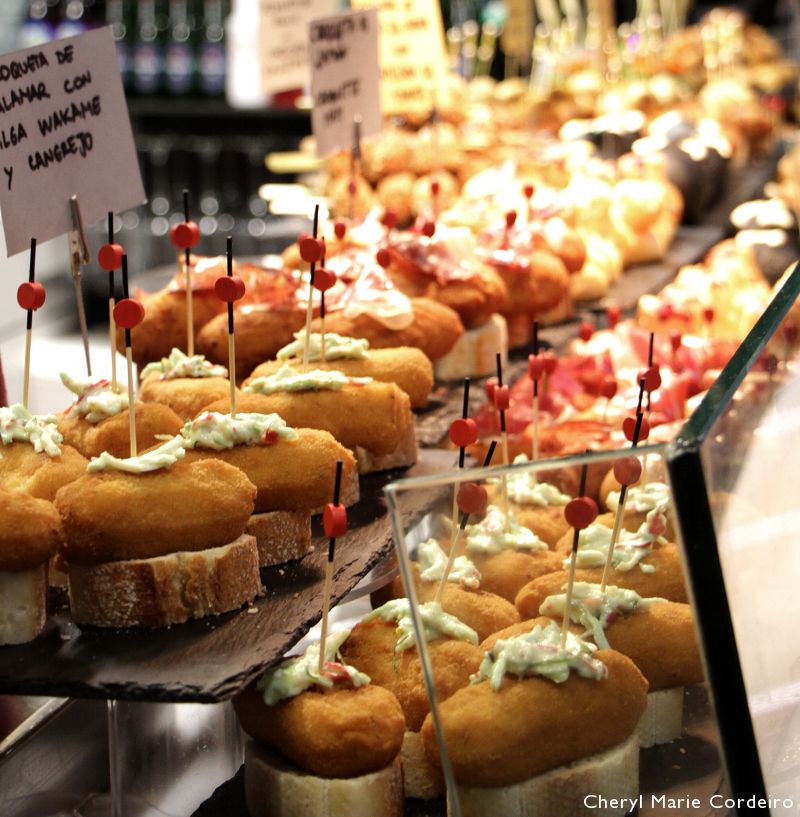 One is truly spoiled for choice for pintxos when in Bilbao, or Basque region, Spain. You could spend a week of dining, experiencing a new variety of pintxos at every sitting. 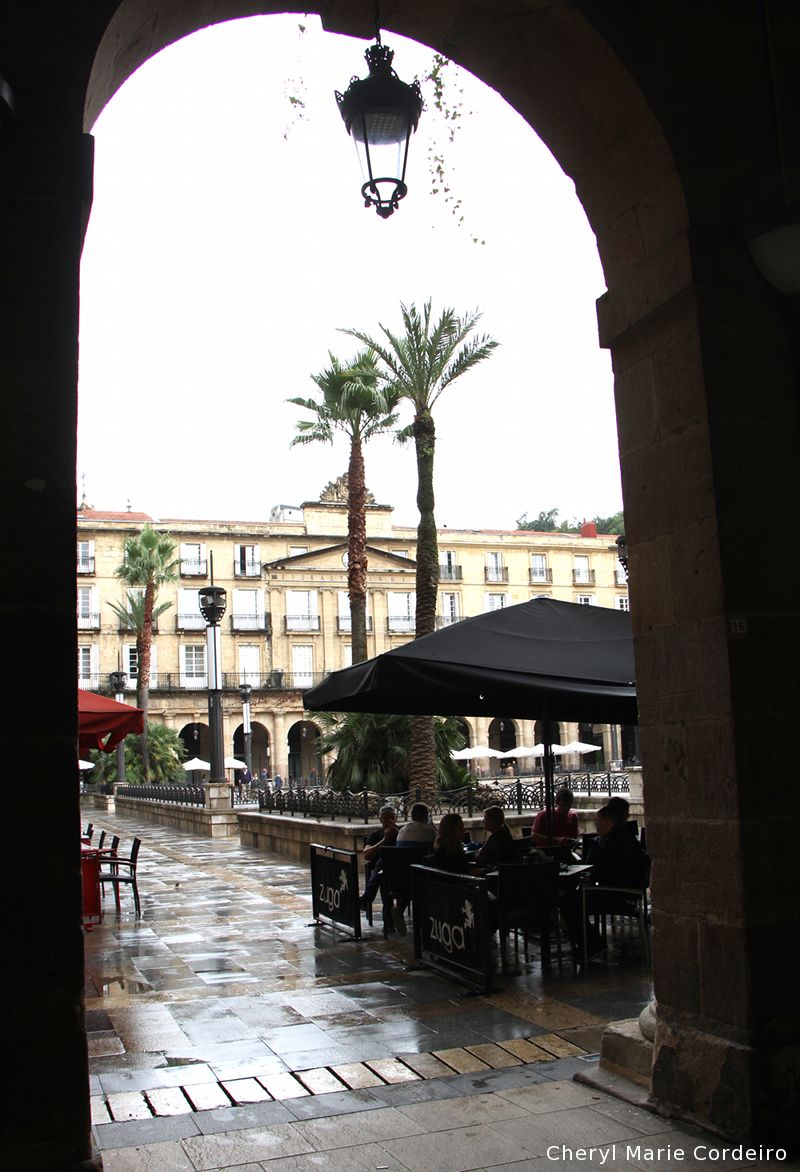 Partial view from an arch (also known as cuevas / caves) of the monumental square in Neoclassical style built in 1821, Plaza Nueva.

It is along the arches of the Plaza Nueva that you can find bars and restaurants serving traditional Basque pintxos, signature food to the city of Bilbao. On Sundays, the square comes alive in a bustle of a traditional flea market where vintage books, and antique curios are offered to be newly acquired. Built in the 1800s, the square has not missed the waves of technological developments. Since 2008, the City Council has made free wifi accessible to all who visit the square. Each bar and restaurant had their own branding of pintxos and list of drinks to offer. As a visitor, it was difficult to decide on only one place for an evening. Given more time, it would have been ideal to spend an evening dining at each bar and restaurant surrounding the square, preferably in conversation with the persons who had put together the pintxos and the overall restaurant menu. 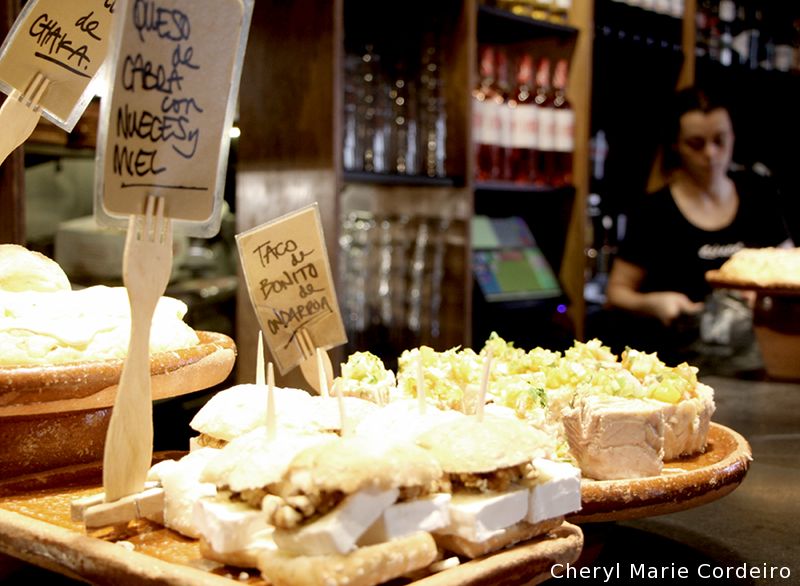 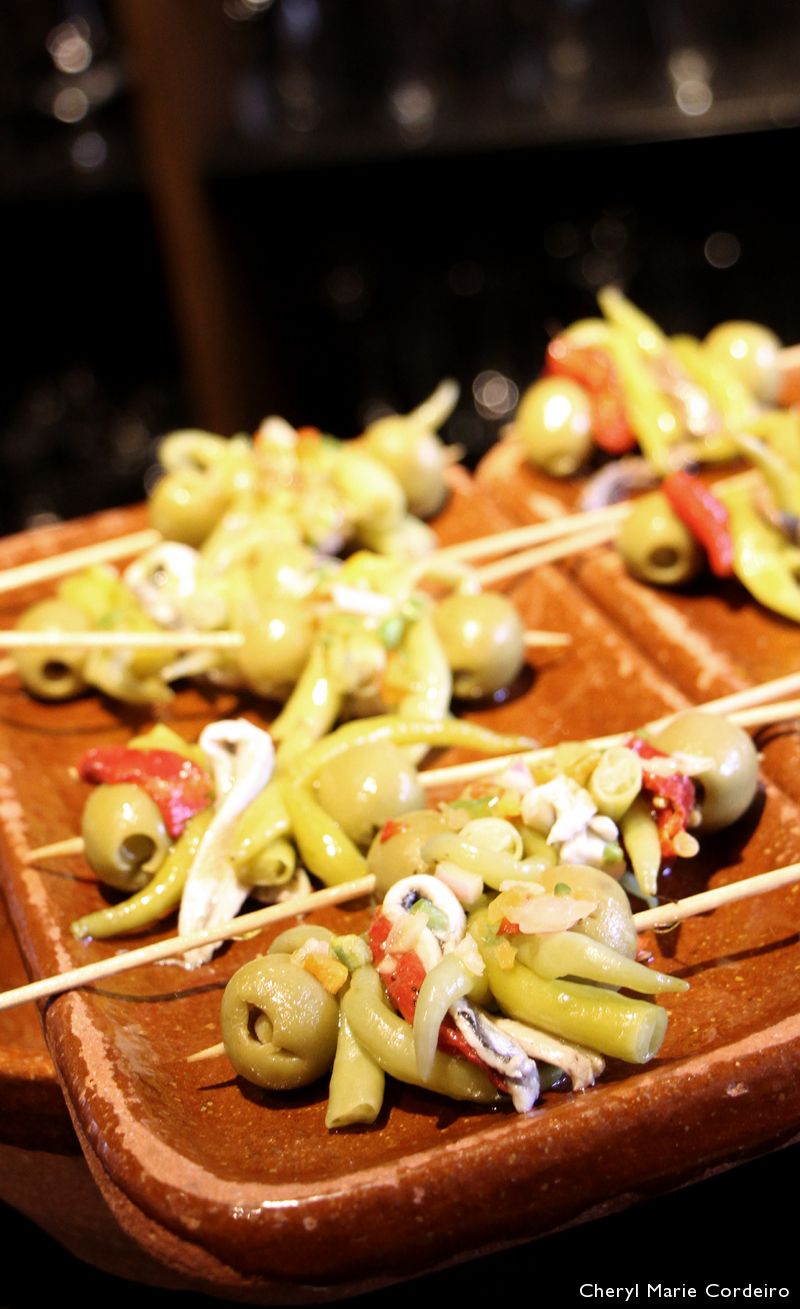 Olives and seafood, harvests of the Bay of Biscay area. Anchovy, egg and salted salmon. This version of pintxos could well pass off as a Nordic appetizer. 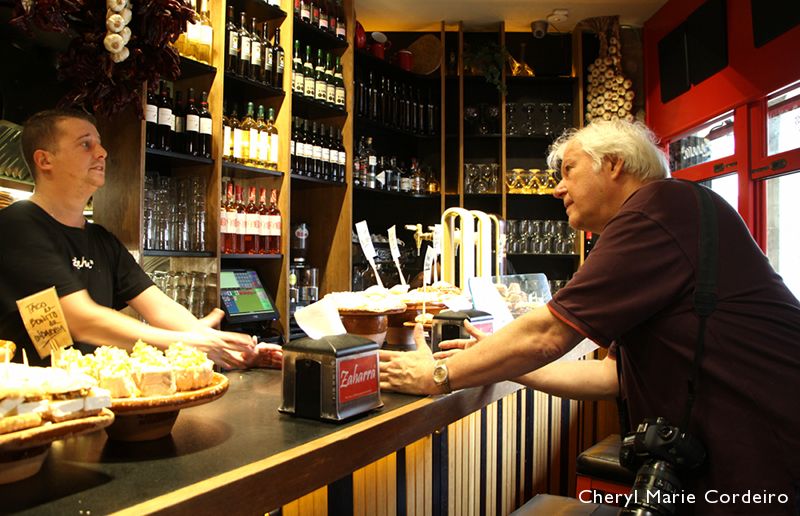