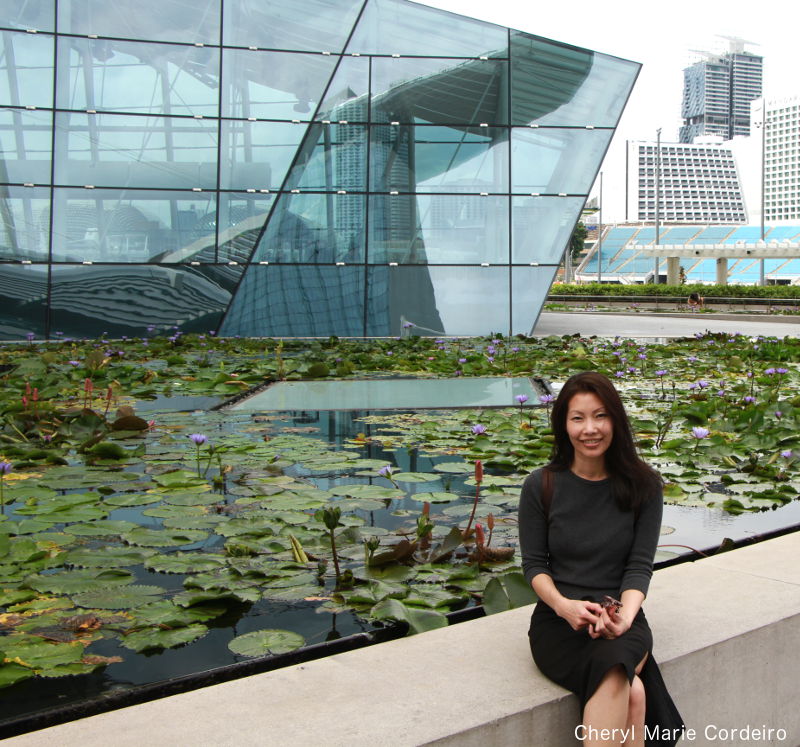 I remember sitting across Marina Bayfront in 2010, looking-on at the huge lotus shaped building in construction in what was to be the ArtScience Museum (ASM) at Marina Bay Sands Singapore [1]. In this visit to Singapore, I found myself sitting right beside that very lotus shaped building by its lotus pond. The museum opened in 2011 and currently features 21 gallery spaces that showcases artworks that incorporate science and technology. As permanent installation, ASM has Future World, produced by teamLab, a Japanese founded interdisciplinary art collective headquartered in Tokyo. teamLab produces interactive digital installations exhibited globally, spanning countries from Europe to Asia-Pacific. They have permanent installations located in Japan, Singapore and Taiwan. Their permanent installations opened in Singapore at both the National Museum of Singapore and ASM in 2016. In Sep. 2018, their work Au-delà des limites will be on exhibit in Paris, France [2].

Products of teamLab could be inherently described as social commentary and awareness grounded in Japanese reality and consciousness. Japan’s advanced economy is facing a set of specific challenges and the fact that it is ageing faster than any other economy on the globe is part catalyst to these challenges [3-6]. Japan’s Ministry of Economy, Trade and Industry (METI) reports that the country had hit a record-high level of number of senior citizens aged 65 and above at over 31.9 million in 2013, with their percentage against total population also at marked record level of 25.1% [4]. Japan’s number of working age population is also on decline, the combined realities of which has led to the country’s economic renewal strategy in their Robot Revolution Initiative (RRI) [4].

Future World by teamLab is an interactive work and play space at ASM that requires humans to interact with the digital artforms in order to experience it and to be part of it. Yet, reflecting of these specific Japanese socio-economic challenges is the fact that in time, with the advancement and greater confluence of digital technologies and art (if not already illustrated now), digital art could be viewed as an inanimate life form of its own, requiring little or no human interaction to exist, even evolve [7].

As dazzling and engaging as the Future World displays are, I could not help but explore nuances of the meta-commentary of the displays. The great fun of the installations is that humans are now invited to co-produce the artworks. Yet implied in the installations is that if humankind does not learn to behave more considerately towards Nature in a co-evolutionary manner, that this digital manifestation of Nature will indeed be ‘future world’, sans humankind. In that sense, teamLab products not only challenge traditional notions of use of space within the interdisciplinary realms of art and technology, but challenges individuals to think about their own place in Nature in future living.

Of the teamLab Future World displays is game of hopscotch outlined in neon on the concrete ground. I took a round of hopping on those neon coloured patches, scoring psychedelic displays of light as I accurately hit with bare feet, the patches digitally designated on the ground. I used to play this game as a girl, beginning first by finding a small fallen branch from the Big Tree that grew in the convent’s school garden. Next, I would search for a weather smoothed stone, preferably flattish on the sides so that it would not bounce outside of the designated squares when thrown. The hopscotch squares were hand-drawn by the fallen branch, unto natural beach sand. A gathering of the girls in the team and the game would begin.

The future is in the creating, else all things are but possibilities, probabilities. The digital installations by teamLab at Future World present an interactive observation point, and a potential unfolding reality. As I watched the children laugh and play with neon illuminated balls in a space devoid of sunlight, wind and plant, the question remains if neon is indeed what we choose for future world. 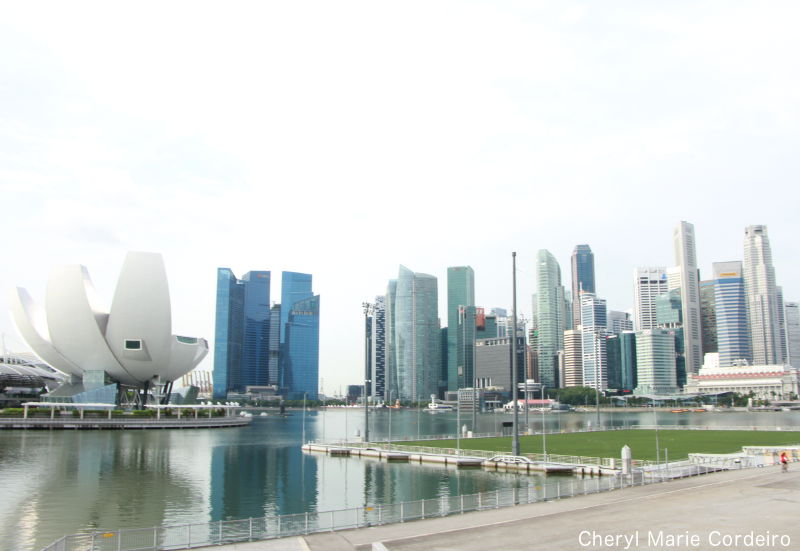 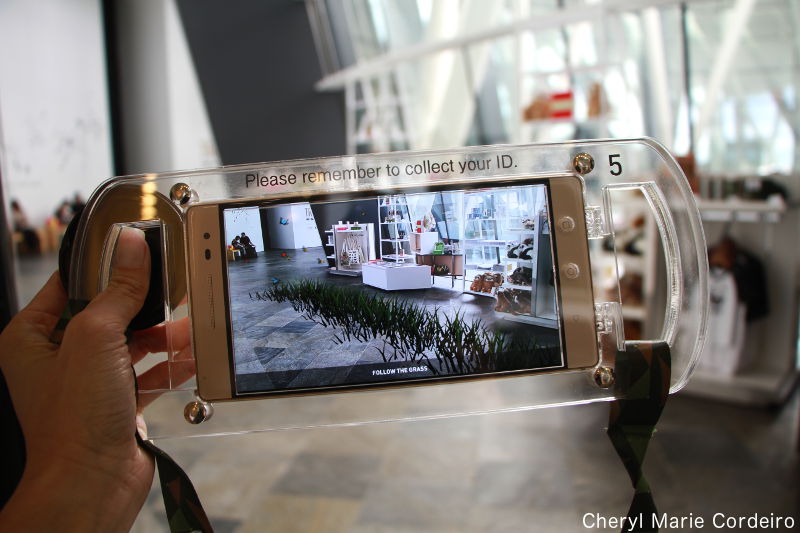 Into the Wild, a virtual interactive exhibit where you take a walk around the ArtScience Museum, discovering animals in a virtual rainforest. This installations requires too, for one to remember to look-up for who stands in front of you so as to not trip over them or walk into pillars whilst interacting with the installation. 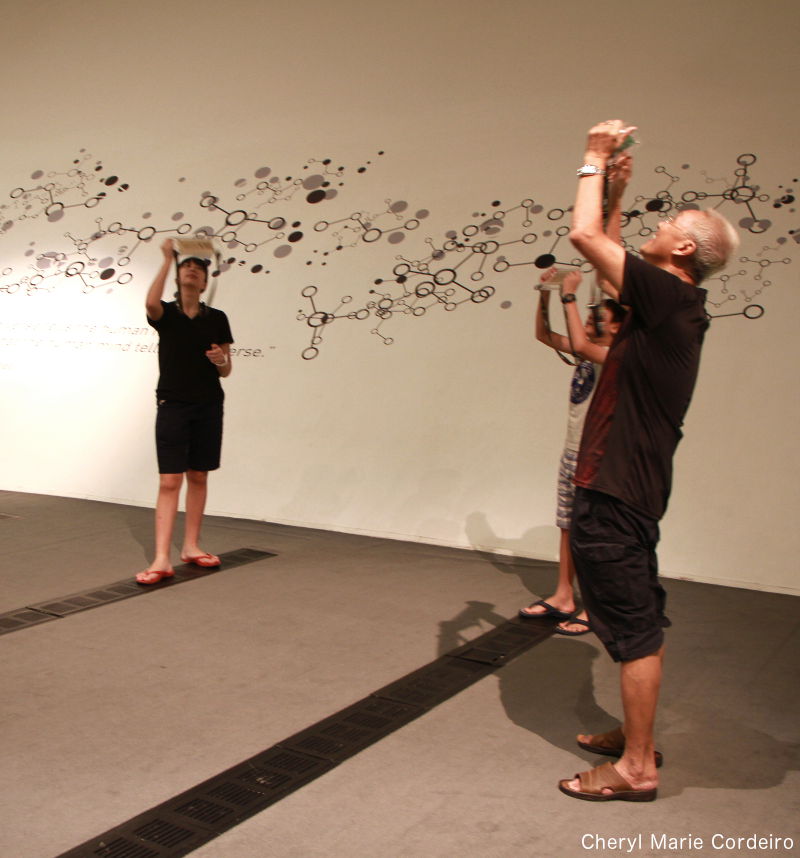 As final stop to the virtual rainforest walk, is to find a suitable spot in which to plant a tree. This tree planting translates into reality when you sign up to have a tree planted in your name in a rainforest in Southeast-Asia. 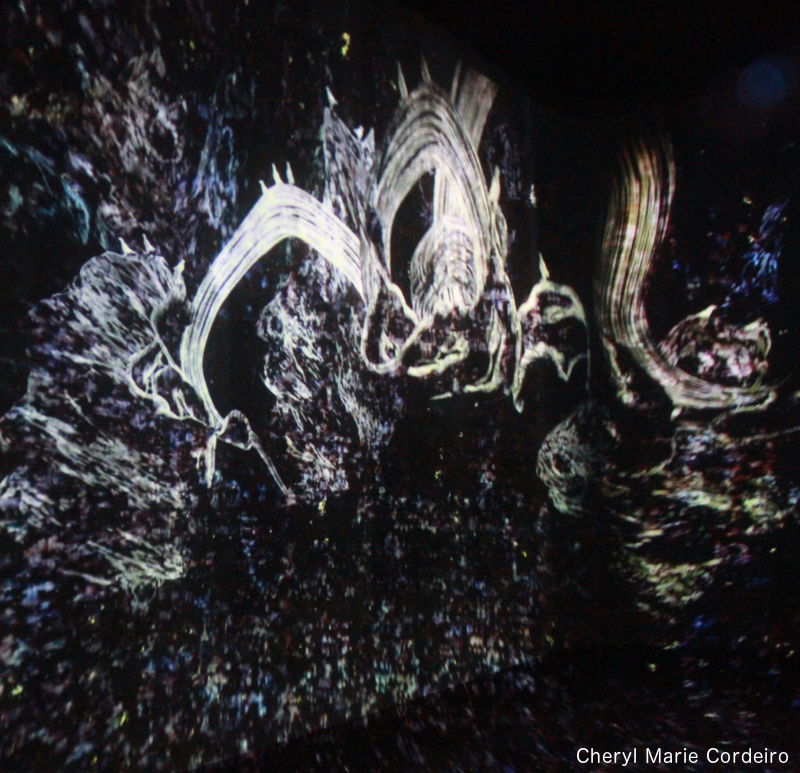 A full room lightart display where visitors are immersed in a room of light formations. 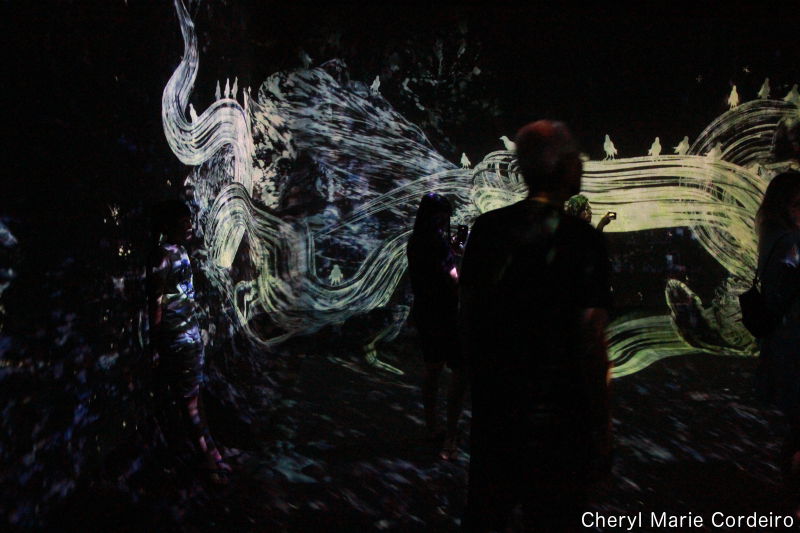 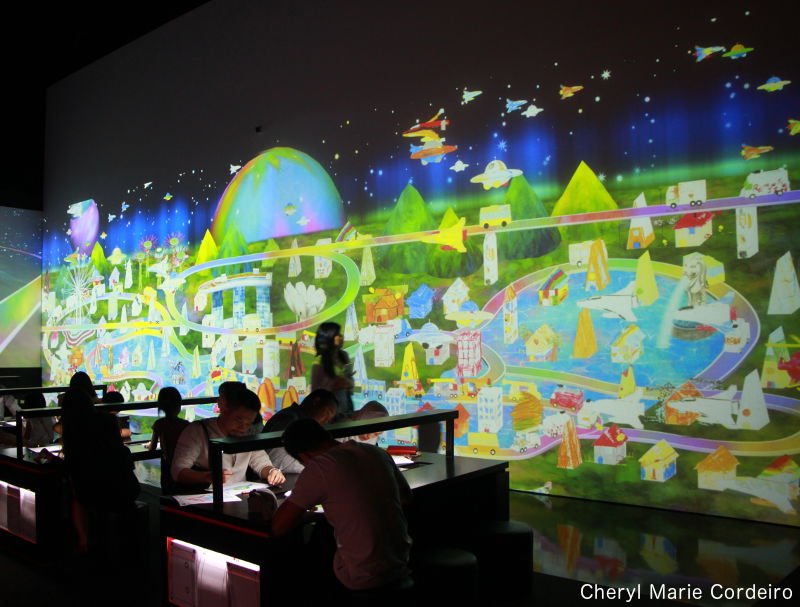 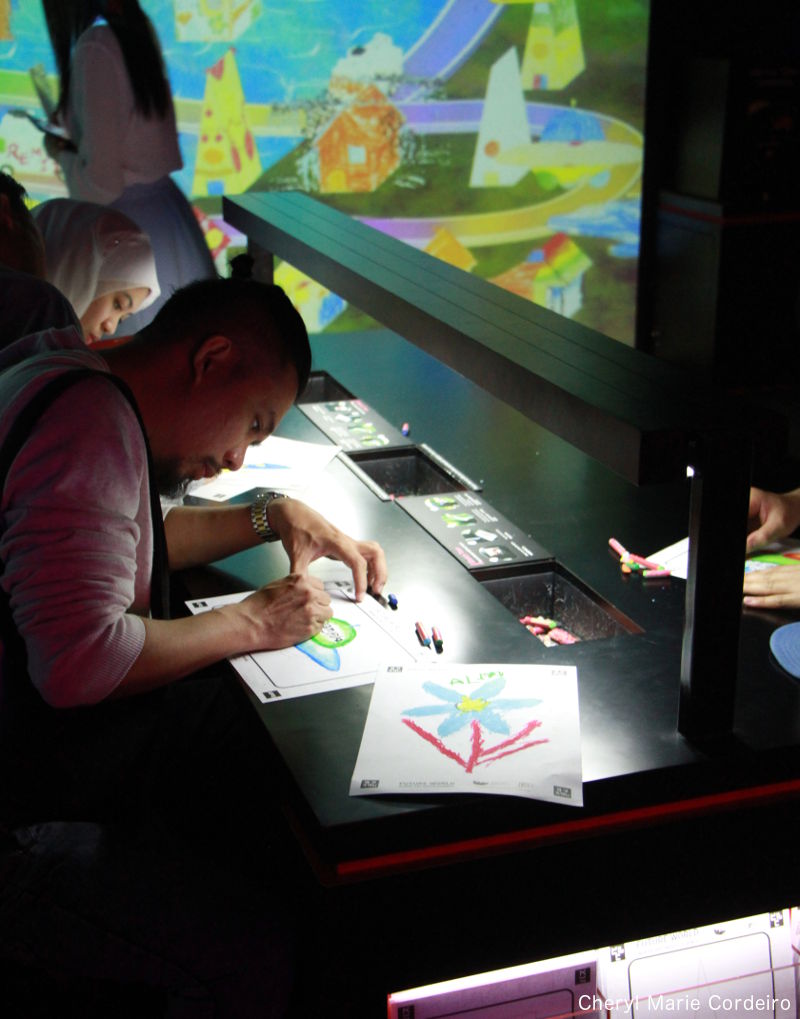 The colourings are scanned, and appear seconds after on the wall display. 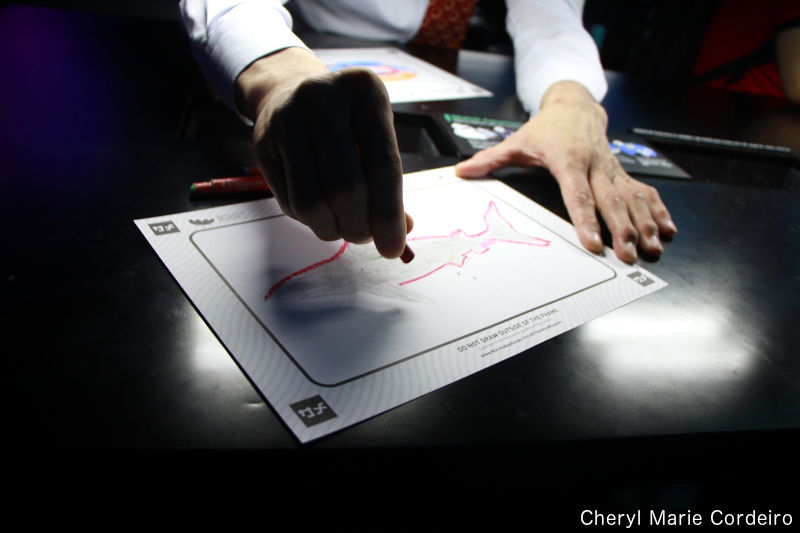 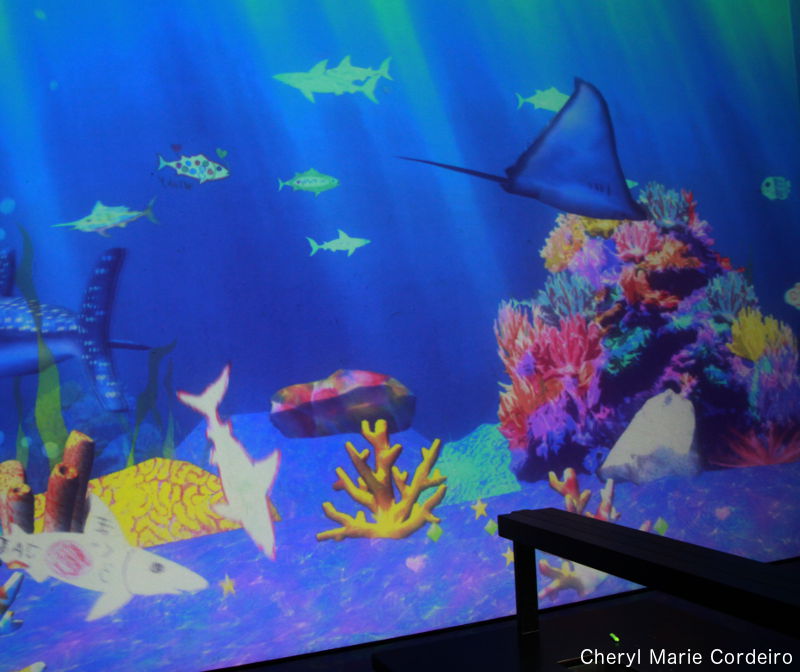 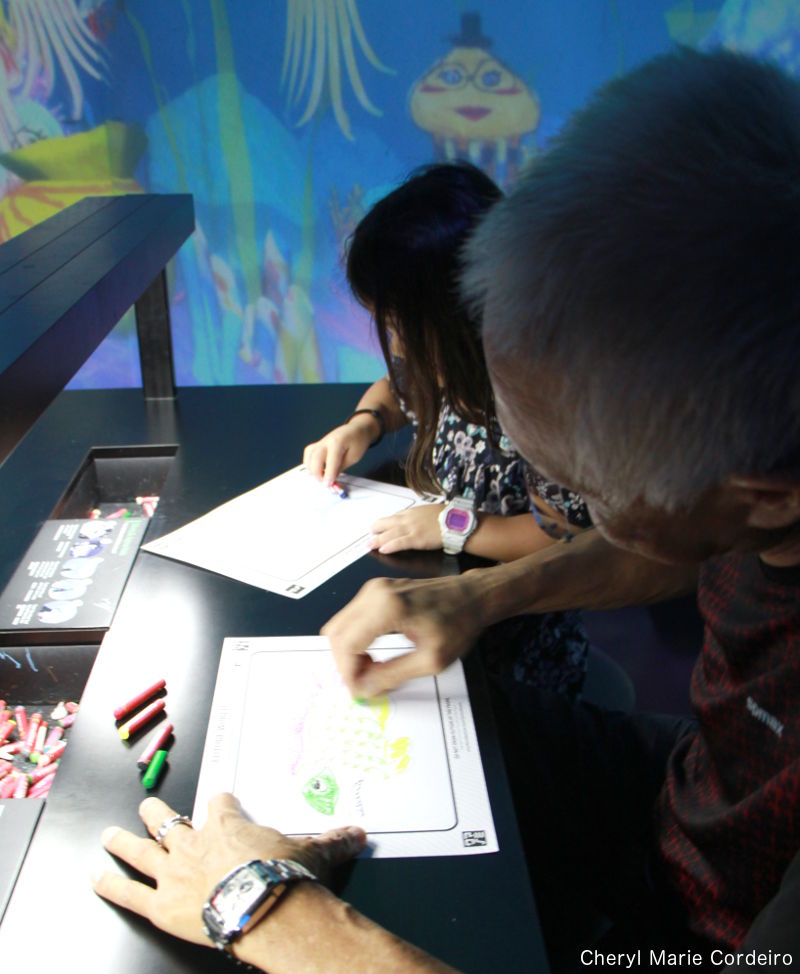 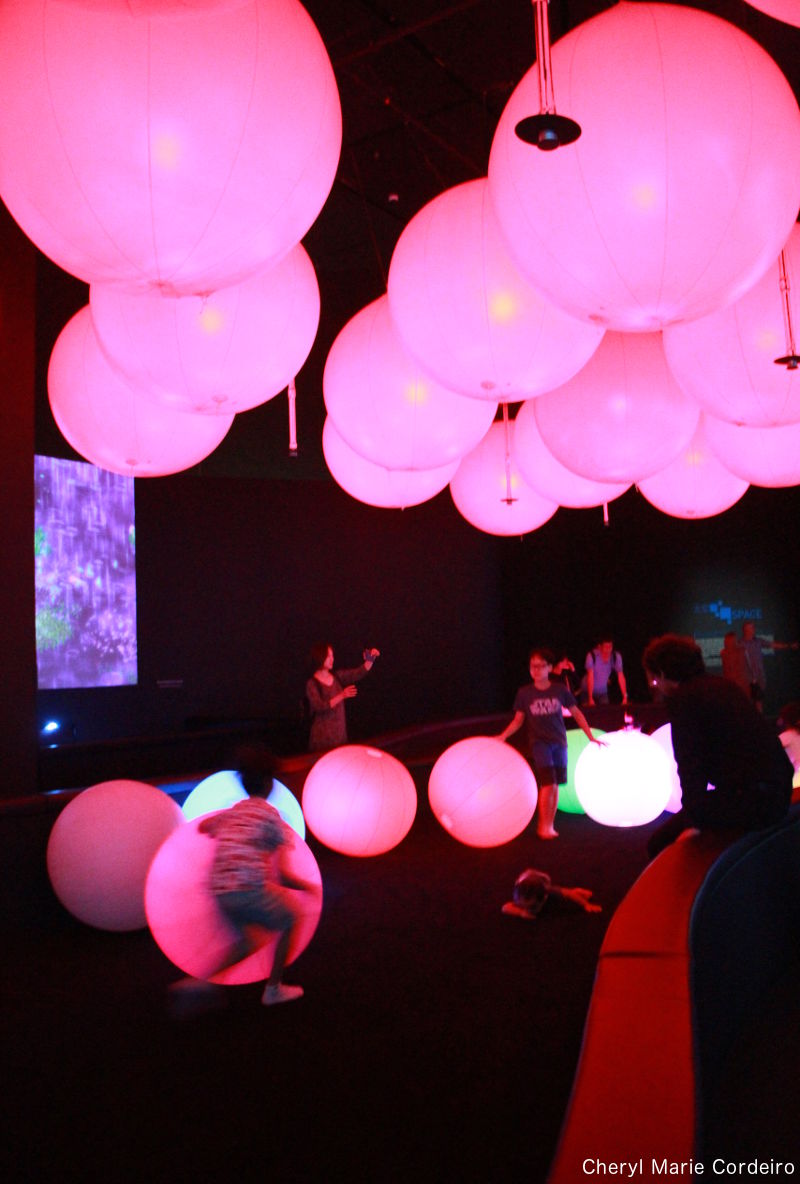 Children at play at the Light Ball Orchestra by teamLab at ArtScience Museum, Singapore. 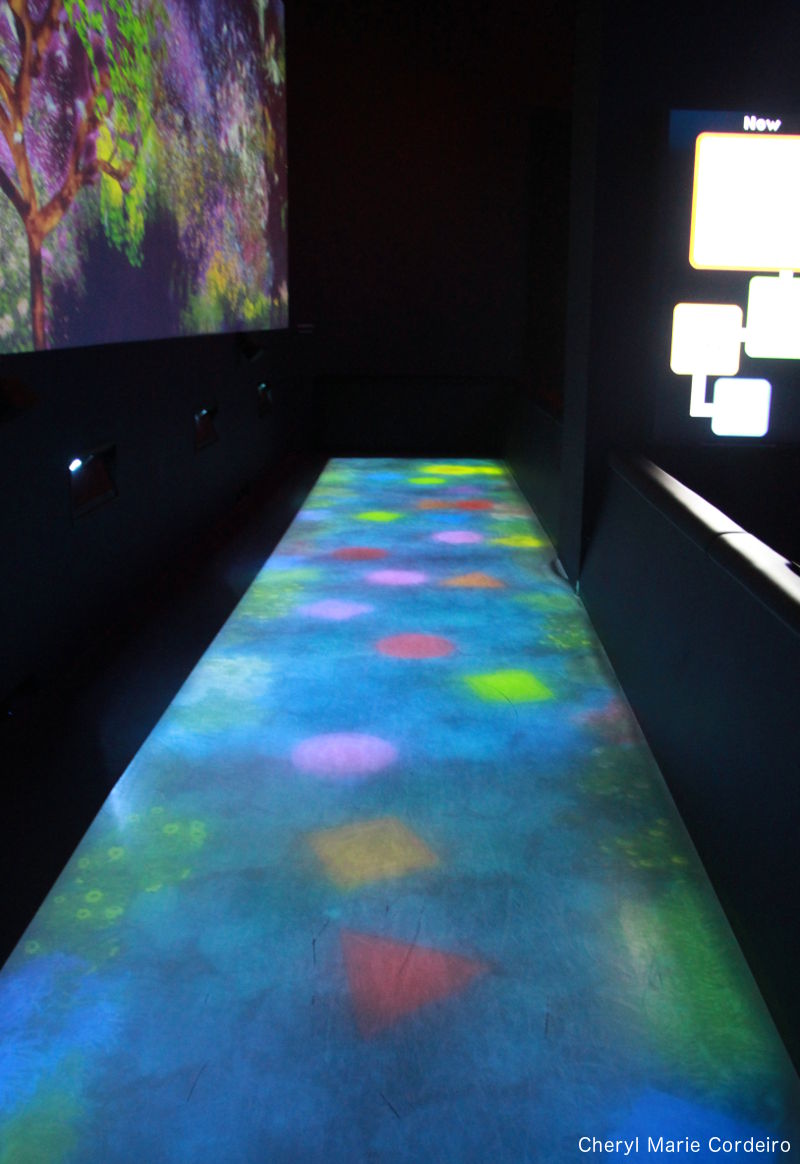 A game of hopscotch projected digitally on the ground. 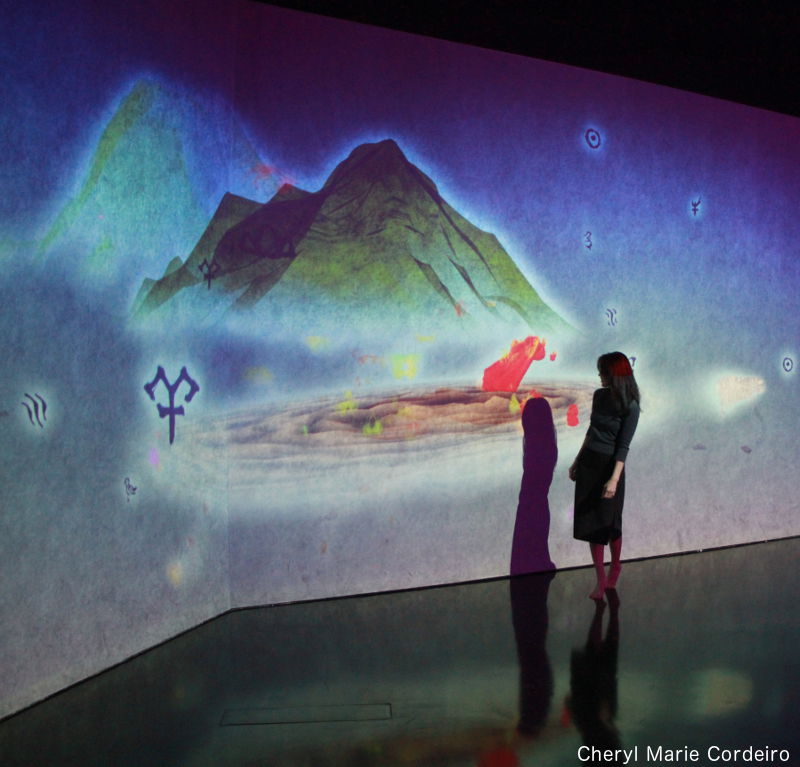 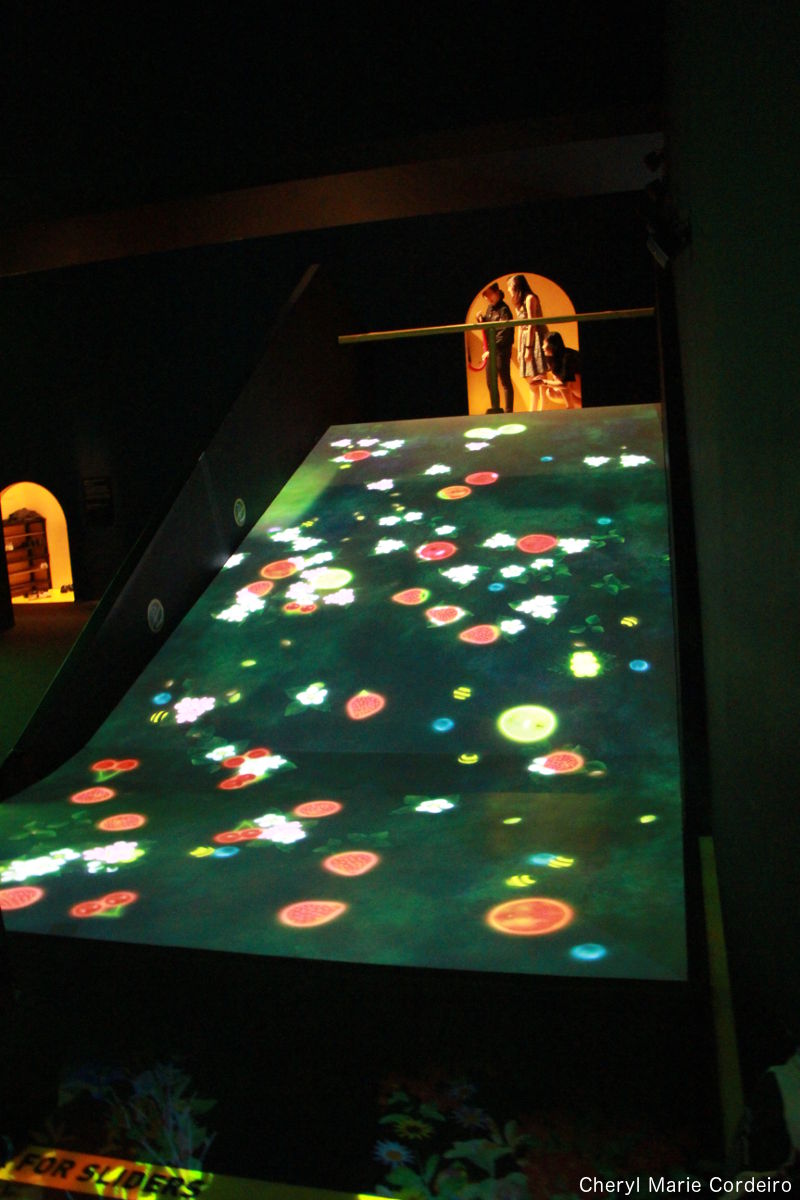 Sliding through the fruit field.

Sliding through the Fruit Field video by teamLabnet. 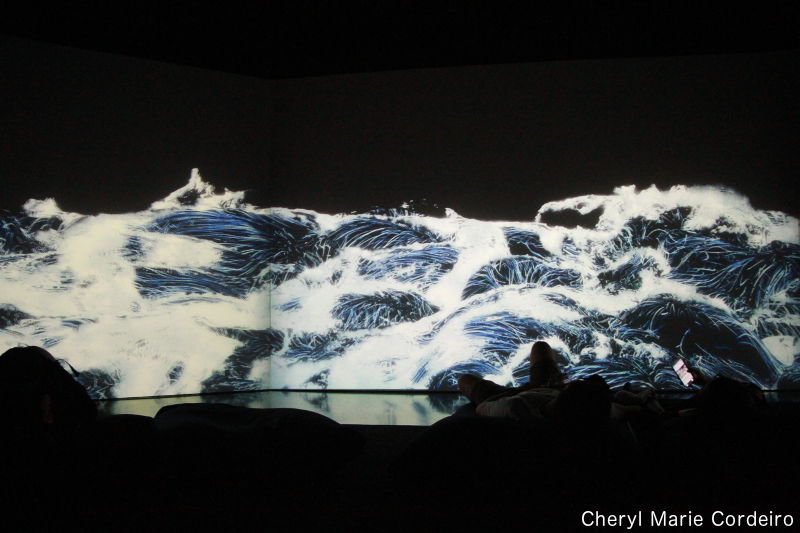 This installation reminded me of another Japanese artwork, The Great Wave off Kanagawa by Hokusai, 1832. 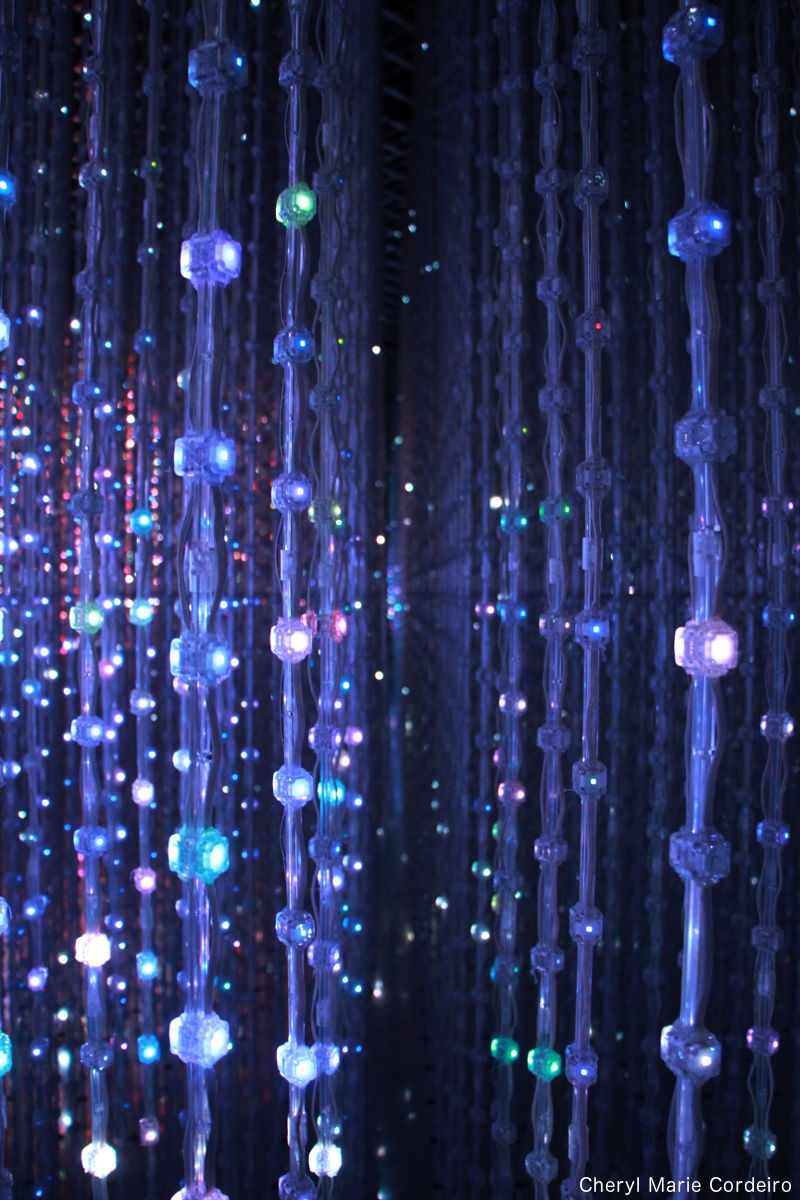 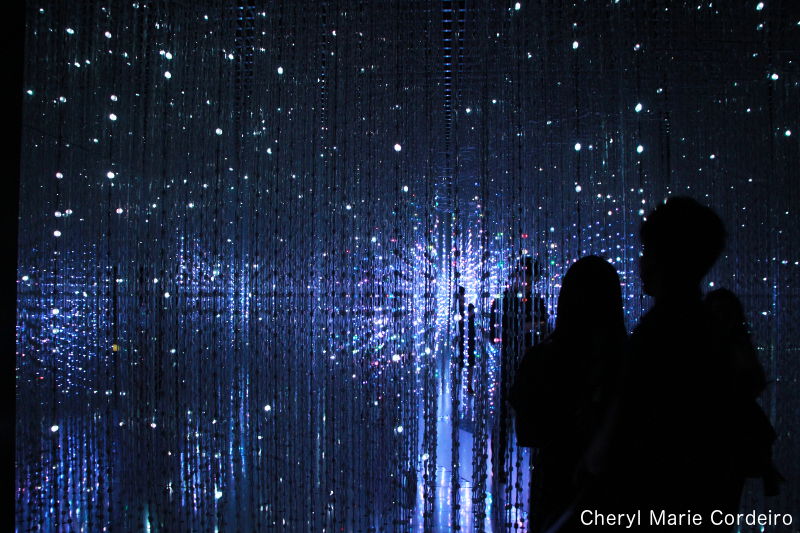 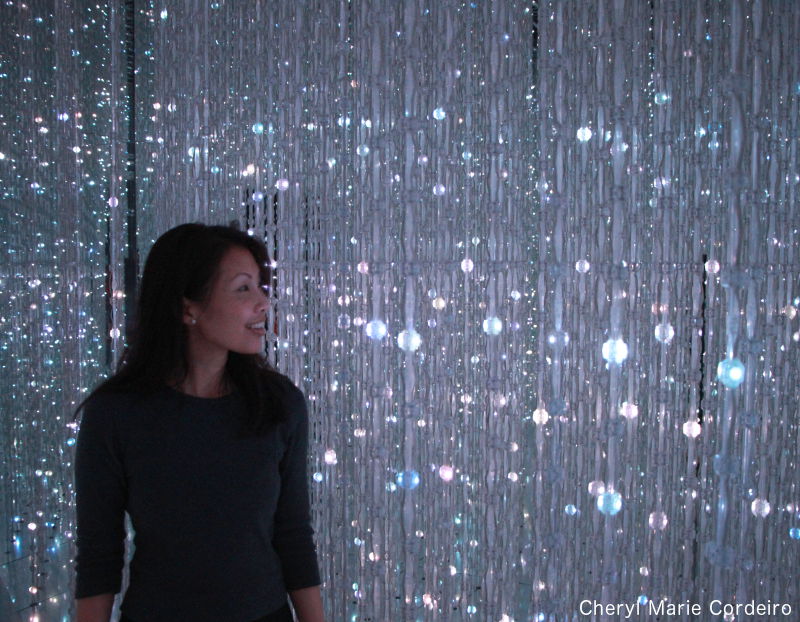 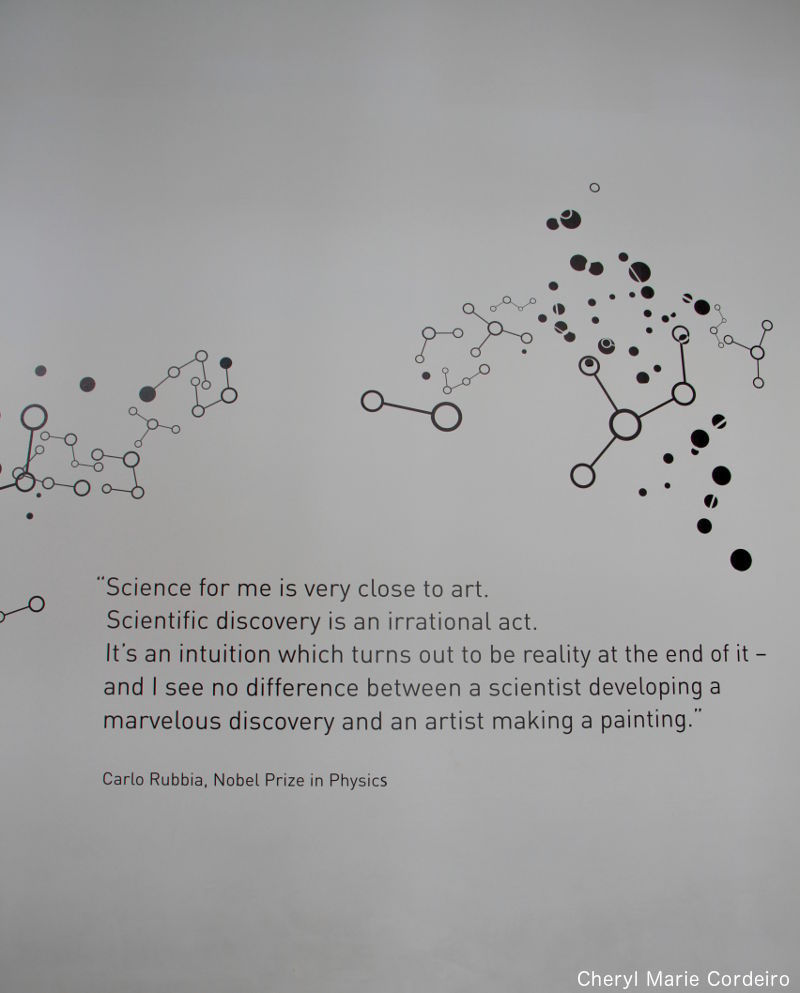