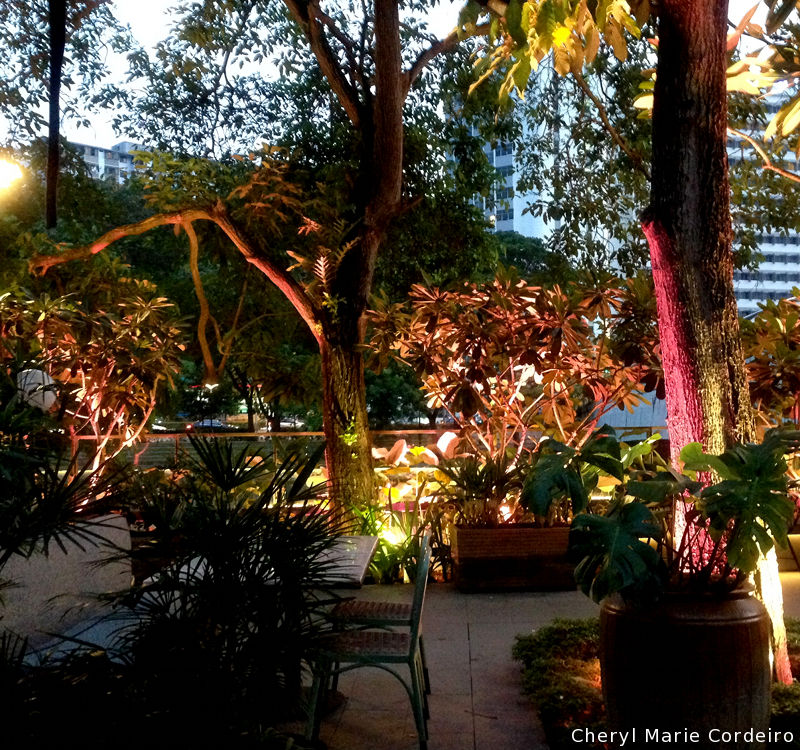 Guen sunk back into her rattan seat, overlooking an open patio of a riverside restaurant, its lush garden lit in mellow tourmaline colours of pink, yellow and green. She had a glimpse view of the skyscraper housing apartments through the leaves of a pong pong tree. Basking in the night’s tropical warmth and listening to the ongoing light jazz filling the atmosphere, she contemplated what it would’ve been like if she were still living in the country. Her faraway gaze into the tourmaline lights broke when she spotted a mosquito whiz by the tip of her nose. By instinct, she first felt for breeze. There was none. How about a fan above her seated dining table? None. In light panic, Guen jumped from her rattan seat, almost accosting a waitress, “Hi, yes, I’m sorry to bother you, but, there are mosquitos out here. Is there any chance that you could move our dining reservation into the air-conditioned space indoors?”

Guen looked past the shoulders of the waitress, unconvinced, “But they look like normal tables, with normal people having dinner. It doesn’t look like an event. What sort of event is it? Birthday? Corporate? There is no MC (master-of-ceremony) present…”.

“Okay, how about moving our space to where there are ceiling fans?” Guen queried.

“I’ll check with my head waitress and get back to you?”, the waitress said, rushing off in a direction.

“Thank you so much”, Guen called after her.

This, mosquito thing, could possibly be a very good reason not to be in this allurity, Guen thought, and sunk back down into her rattan chair. Hearing the creak, she immediately straightened her back and waved at another bypassing waitress,

“Yes, I’m sorry, but do you think I could steal that cushion from over there and have it for my backrest? This rattan chair is uncomfortable.” Guen said.

“Sure, of course ma’am.”, the waitress said and soon scooted back with a cushion.

With her back on a cushion, Guen was delighted but none too hopeful about new seating arrangements when she saw the head waitress approach. The head waitress was tall and broad chested, with a figure that defied any twentieth century occidental stereotype of a feminine oriental ideal. Guen looked up at the head waitress, “Uh, yes, ma’am, I’m sorry to say that we are fully booked and we cannot move your dining place inside or under any ceiling fan, but we do have this”, the waitress concluded in an upbeat tone. Guen took a closer look at the item displayed by the head waitress. A spray can of mosquito repellent. Guen’s eyes widened slightly in horror. The narrative of tourmaline lit trees, the light jazz music in the background, the very call of tropical romance, ends in mosquito repellent?

Guen nodded and took hold of the spray can and shook it. It was almost empty. “Is this your standard serving at the tables, together with the basket of breads?” Guen queried with a smile. There was no response from the head waitress. “Thank you, I’ll keep this here.” Guen said, placing it on the table top next to the well laid out, yet to be filled wine glasses.

“Enjoy your evening ma’am” the head waitress said as she politely bowed out of the conversation. Guen nodded.

Guen sprayed on the mosquito repellent as she would have her Chanel No. 19. Plenty, and drowning in it. The perfume of the mosquito repellent was reminiscent of hairspray. She went back to browsing the drinks list for the evening. It was not long before she spotted one of two of her evening’s company, Lynn. Although not having seen each other for the longest time, Guen thought it best to cut the niceties in view of more urgent matters,

“They gave us mosquito repellent. We need to move, now.”

“Drew is not here yet right?” Lynn queried. Guen nodded, in all familiarity. “I’ll speak with the head waitress” said Lynn and headed straight for the dinner reservation counter.

Ten minutes later, the women were seated in a new corner of the restaurant, under a ceiling fan. Guen and Lynn were in mid-gossip exchange of life’s experiences and current affairs when Drew walked in. Spotting the mosquito repellent on the table, Drew who had booked the dinner reservation blurted,

“Eh, sorry ah, I’ve never dined here before, this is a new restaurant, I’ve only ever seen it passing by. I thought it was a nice place.”

“It’s alright, it’s fixed. This should be fine.” Guen said, taking notice of a new perspective of the pink lit pong pong trees in the garden.

“Yah, good that you’re here, how are you babe?” Lynn queried. But the girls could hardly settle into casual conversation before a waitress came along for an order request.

“What are you ordering?” Lynn queried the table, whipping out a pair of reading glasses to browse the menu. “I had a lot of meat today, so I think I’ll order something else.”

“I don’t know, I’m on an active fast.” Drew said, “And Guen doesn’t eat dinner, so it’s only you and me. I also had a lot of steak today, so I think I’ll order a salad.” Taking off her reading glasses, Lynn looked at Guen, “You’re not going to eat dinner?” Guen shook her head. “Not even this time with us?” Lynn looked straight at Guen. Guen shook her head, “I can’t sleep if I eat too much for dinner. I dream in technicolour.”

Guen smiled, “It’s a bad thing when you lucidify in technicolour horror scenes that jump out at you in bed.”

“How do you know what LSD feels like?” Guen asked in earnestness, “You’ve taken LSD?”

“Excuse me ma’am, would you like me to come back later for your order?” asked the waitress, cutting in on the conversation. She had stood by the table all this time.

“We better order. What are you ordering?” Lynn queried the table, putting on her reading glasses again to browse the menu.

“I can’t believe you have reading glasses, I just ordered some myself! They cost a lot!” Guen said.

“You can get them from the pharmacy? What?! Can I try them on?” Guen queried, stretching towards the pair of reading glasses.

“I think I come back later for your order?” the waitress said in an affirmed tone of voice.

“I’m not sure, I also had a very heavy lunch, too much meat.” Lynn said, taking back her reading glasses from Guen to browse the menu.

“They have beef steak, they have grilled lamb, … sea bass, how about pork? They have the Iberico pork chop with roasted broccoli, onions and bagna càuda dressing.” Drew said.

“Yah, okay, we can share the Iberico pork chop.” Lynn said, much to the relief of the waitress, who immediately noted the order.

“Yes, I have to have my broccoli because I’m on this three months active fast. No carbs, no sugars during these three months. But onions, they’re sweet, so I’m not going to eat the onions, you can have them.” Turning to the waitress, she continued, “What is the bagna càuda dressing?”

“Huh? Anchovies? I don’t quite like anchovies, it leaves an aftertaste in my mouth. Do you have an alternative?” Drew queried.

“I can check an alternative for you ma’am” said the waitress.

“Or okay, no need, I don’t need any salad dressing, because it’s sweet. I’m on this active fast, I’ll just have the broccoli as is, and the salad dressing you can put on the side?” Drew asked.

“Yes, I’ll do that.” said the waitress. The waitress was about to leave the tableside when Drew asked Lynn, “Do you want to order dessert now?” The waitress made an about turn.

“Yah, we can do that. But I cannot have too much breads for desserts, I bloat. I don’t know why, it happened only a few years ago, but when I eat carbs in the evening, any carbs, I just bloat.” Lynn said. After looking at the dessert menu, Lynn closed it and pushed it towards Drew, “I think I’ll order later. See how large portion the pork chop is first.”

Pulling the menu towards her, Drew asked Lynn again, “You sure you want to order dessert later and not now?” She opened the dessert menu to browse through it again. “Eh, Lynn, can I borrow your reading glasses? I want to try.”

Observing the scene, Guen smiled and turned to the waitress, who stood clutching her notepad with two hands against her chest. Catching Guen’s eye, the waitress asked, “And your order ma’am?”

“She doesn’t eat dinner.” Drew answered to the waitress, ahead of Guen.

“Water.” Guen replied to the waitress. “Just, hot water, thanks.”