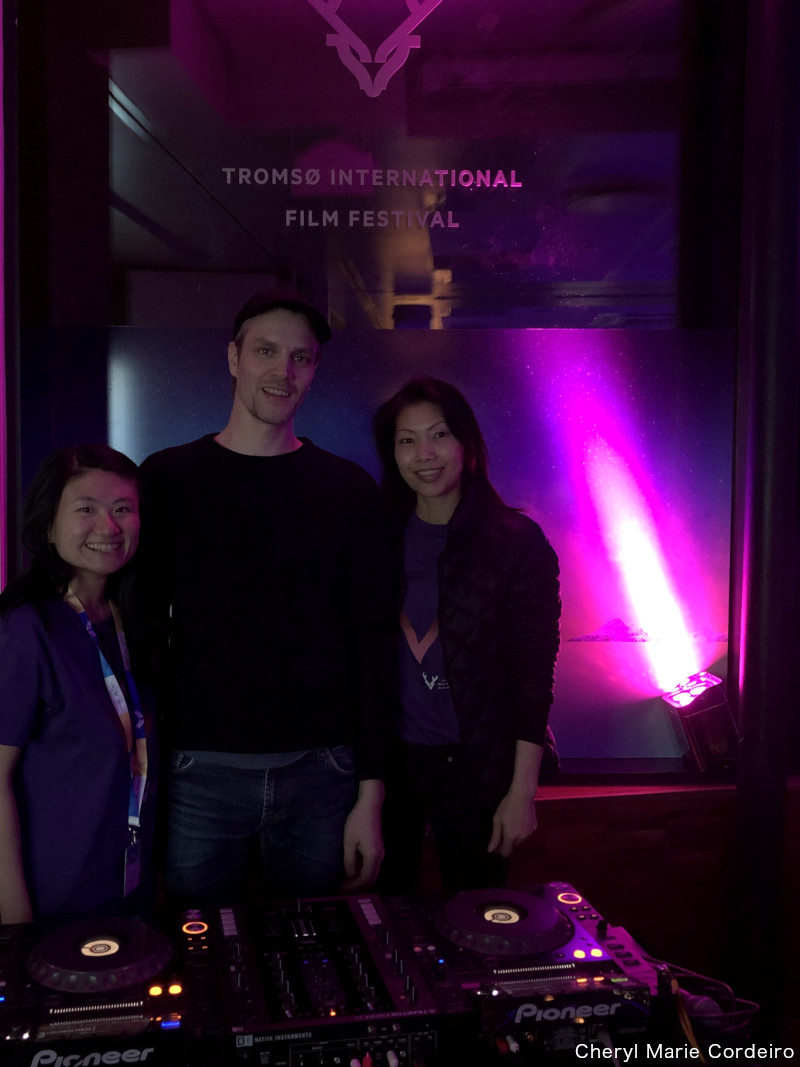 The 29th Tromsø International Film Festival (TIFF 2019) is currently ongoing in this Arctic Circle city. Beginning on 14 January and ending on 20 January, the film festival is expected to see over 60 000 thousand visitors to the city of Tromsø. TIFF 2019 draws both local and international visitors to its annual event. It is also an important meeting space / platform for Norway’s local film industry to meet with its international network. An important socio-economic catalyst, in 2018, the film festival generated 26 million NOK in related activities for the local community [1].

Film showings and industry events are dispersed over several venues in this city. One of my favourite theatres is Northern Europe’s oldest theatre, Verdensteatret. Constructed in 1916, Verdensteatret shows quality films (current and classics) on a daily basis, and keeps a lively interest in history, film and cinematography for the region. The insides of the theatre showcases large muriel paintings on its walls and makes for an interesting venue for current debates to take place on literary arts scene. Verdensteatret is also the venue that will run 4 extra screenings for TIFF 2019 on Monday, 21 January [2]. In complementary contrast to Verdensteatret is Utekino or the Winter Cinema. Drawing mostly a very young crowd of pre-teens with parents in tow, Utekino is a specially created outdoor threatre located in Tromsø’s main trading square (Torgcentret) during the film festival, showcasing free screenings for both long and short movies.

Navigating the film and event venues and getting from one place to another is quite convenient due to the compact size of the city. It is also currently the last days of mørketid, so walking in the skylight of a somewhat perpetual dusk/dawn provides a little magical touch to the atmosphere of this entire event. Tromsø has also had a few days of intermittent heavy snow, which makes for a visitor ready winter landscape that is instagrammable. 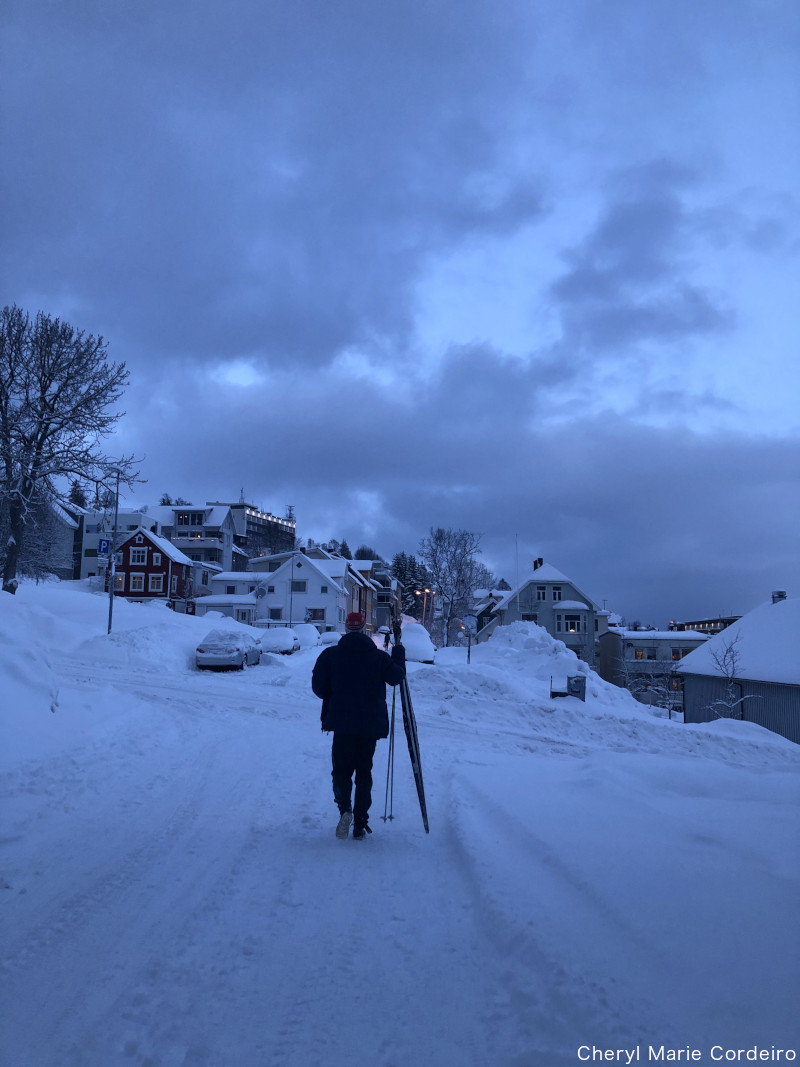 The winter landscape and blue light of Tromsø during this time of year, just before the sun begins to rise above horizon again. This picture was taken in the area of the main cinema, Tromsø’s Aurora Kino Fokus. 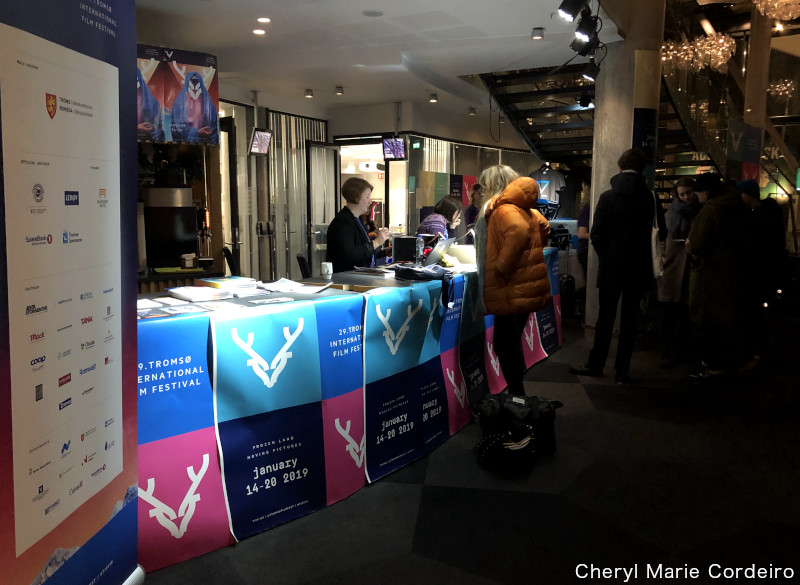 A ticketing counter for the film festival, located in the lobby of Clarion Hotel at Kaigata 6. 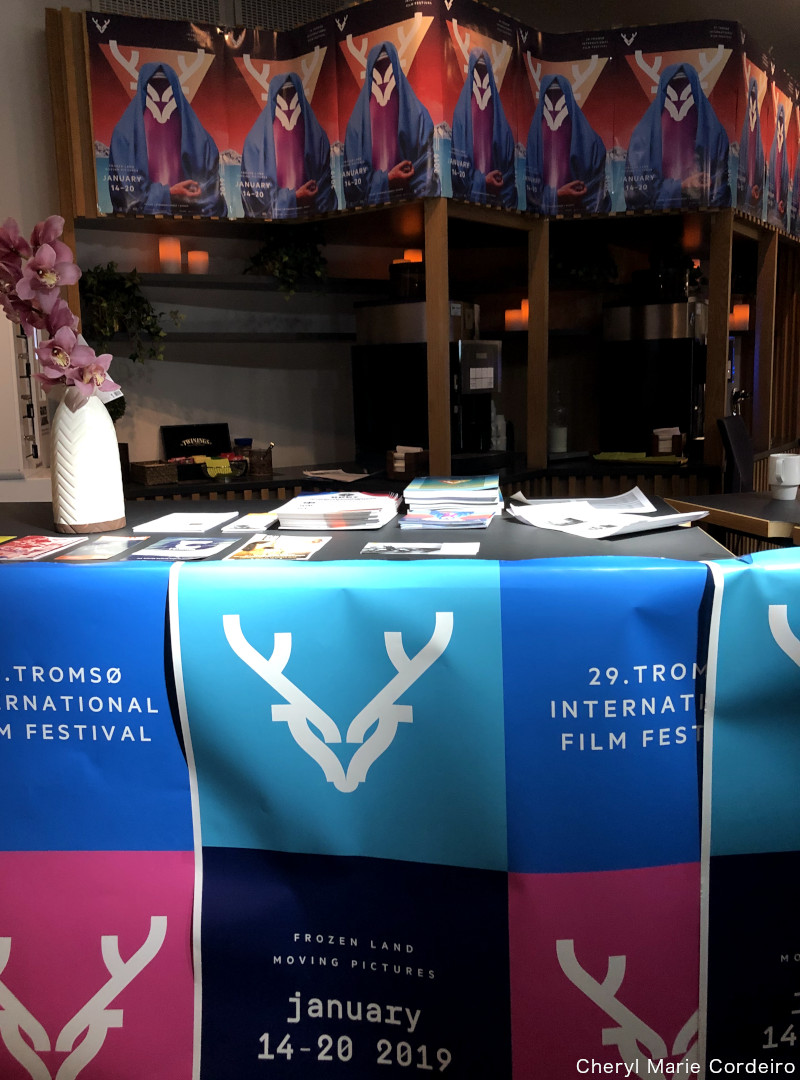 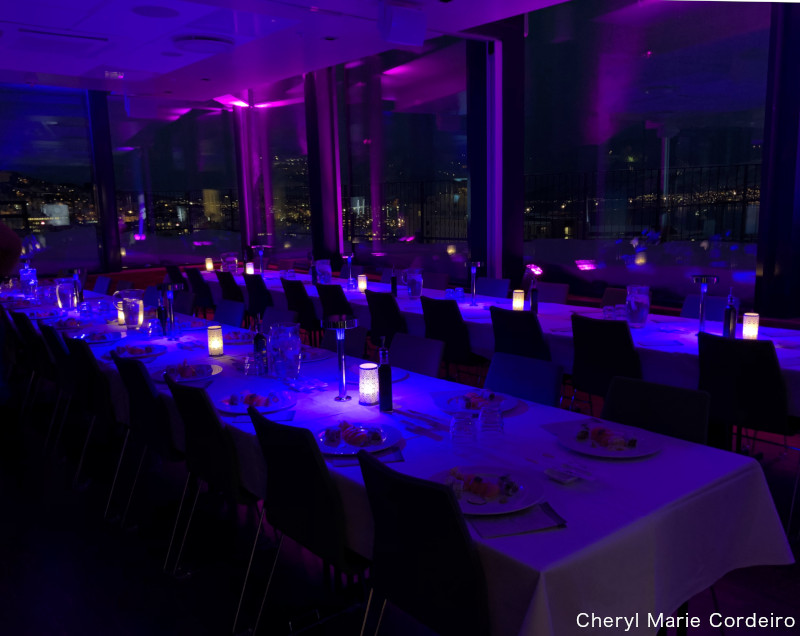 Scene from the Sky Bar at The Edge, Clarion Hotel, TIFF 2019. 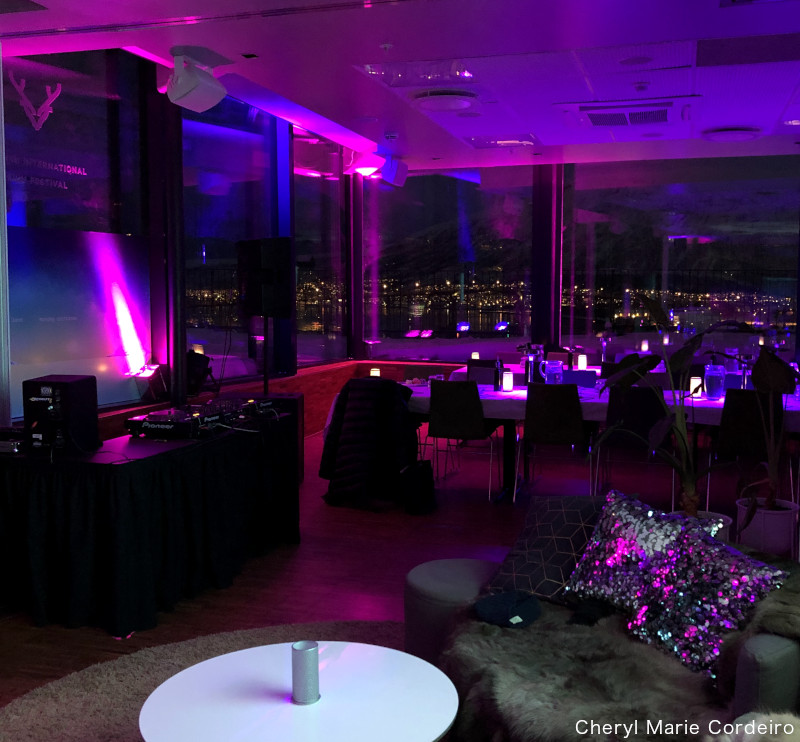 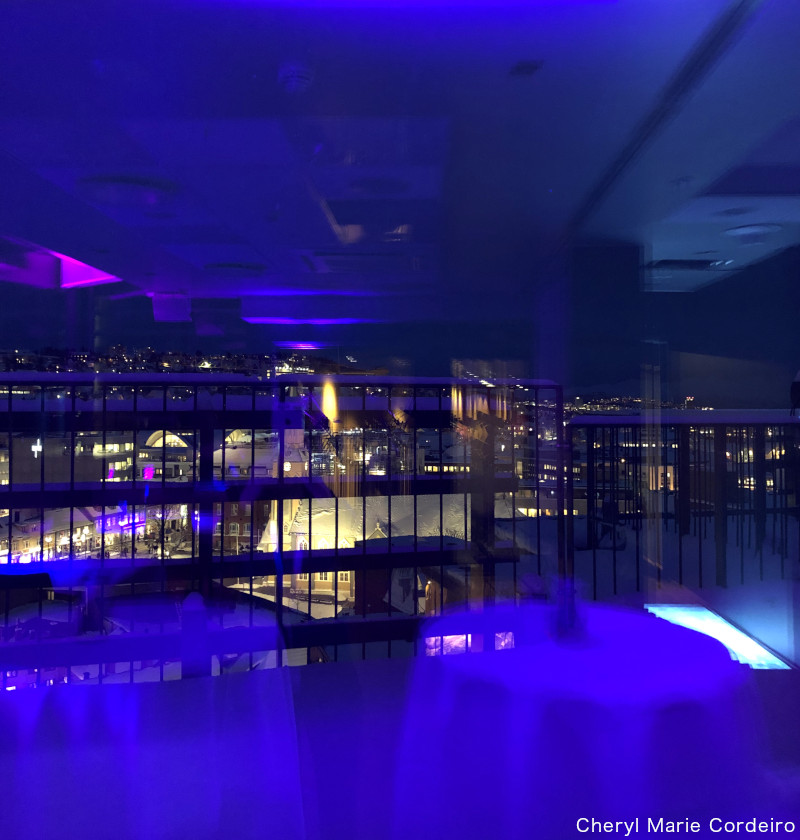 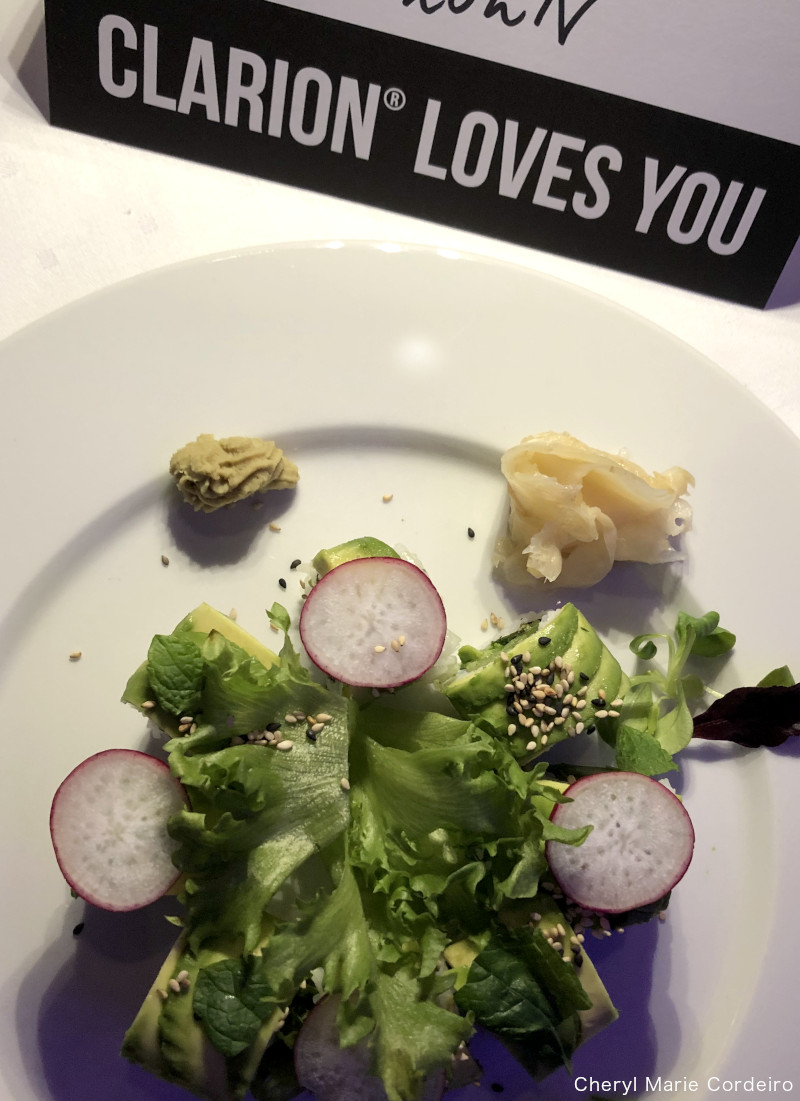 The fish for this event was afforded by the Lerøy, Seafood Group. Vegan alternatives were also available. 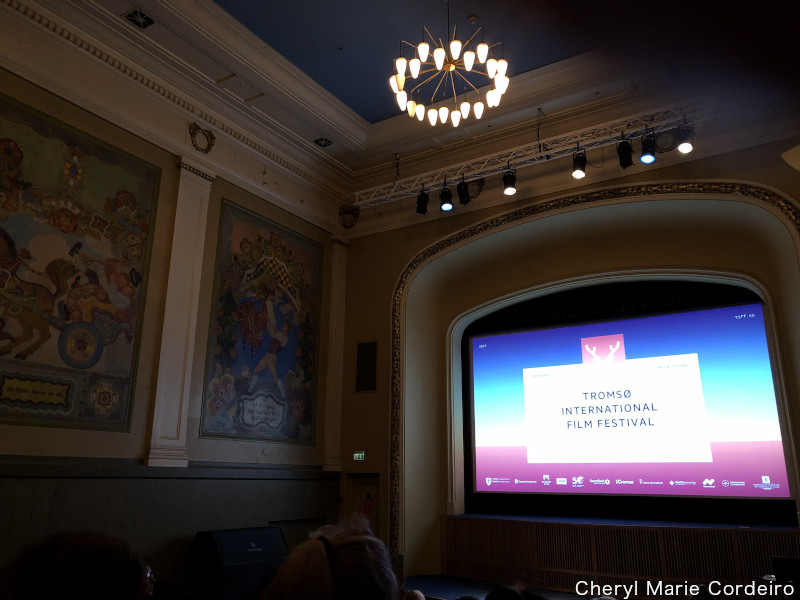 Verdensteatret, built in 1916, is Northern Europe’s oldest theatre. This theatre screens current and classic films daily. And if not to view a movie, the theatre has a café that serves up a good hot chocolate and coffee for a cozy evening out.