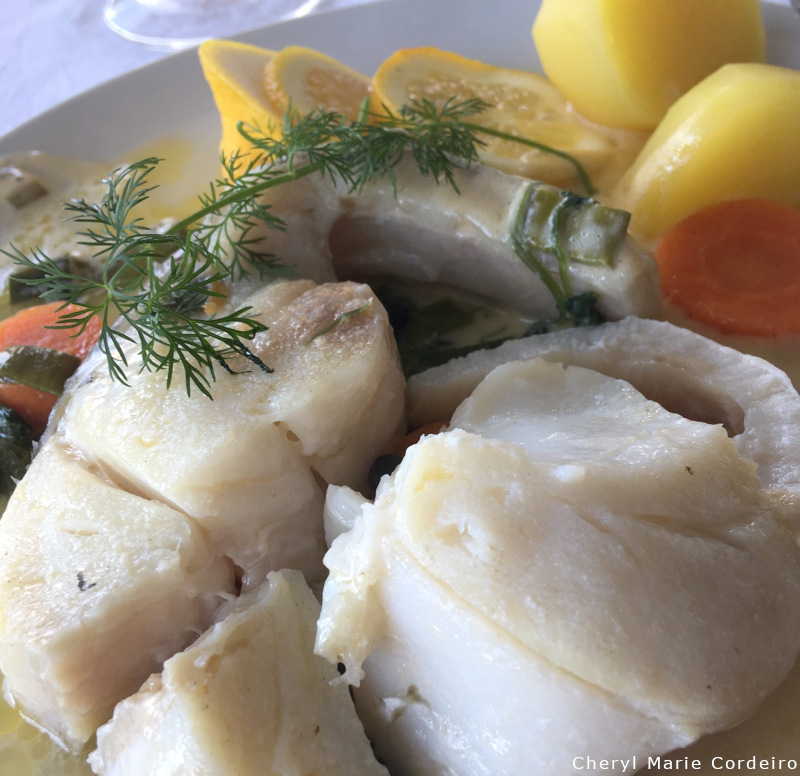 Skrei season in Norway is during January to April each year. This is when the fish arrives to the northern coast of Norway in order to spawn. In Northern Norway, this seasonal fish is traditionally served as a dish called mølje. As such the fish is boiled together with its liver and roe and served with a side of potatoes and carrots. This particular skrei was captured at Lofoten and bought at the main market square in Tromsø, Norway.
Text & Photo © JE Nilsson & CM Cordeiro 2019

The Norwegian skrei season is a miracle that repeats itself.

For those few unfortunate that are not yet familiar with skrei, it is a North-East Arctic cod that lives in the Barents Sea, in an area enclosed between Franz Josef Land on the north, Novaya Zemlya on the east, and Svalbard on the west. Skrei is the Norwegian word for wanderer. 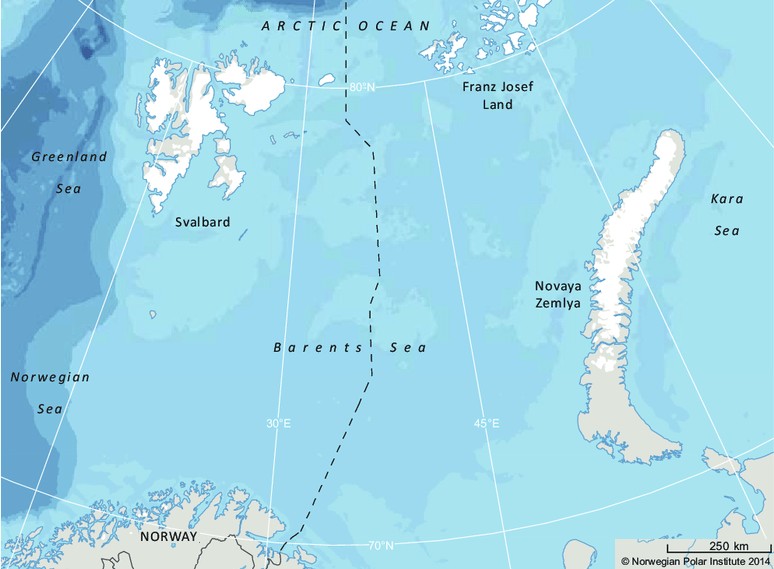 Northern Norway is at the bottom left of this map. Tromsø is along the western coast, just below the edge of the map.
Skrei migrates down from Barents Sea south down to Lofoten to mate during January to April. According to the World Wildlife Fund (WWF) [1], cod and skrei (gadus morhua) are divided into different stocks towards sustainable seafood consumption. Cod (capture based aquacultured) and skrei (seasonally wild caught) from the Norwegian Sea and Barents Sea belong to some of the world’s largest cod stocks and their population is in general good condition. Cod from the North Sea and Skagerrak, the waters divided between Denmark, the Swedish west coast and southern Norway, are heavily overfished and belong to the red list of fish to avoid consuming. Almost all frozen cod sold in shops around the world come from the Northern sea areas. One way of distinguishing sustainable cod and skrei from the Norwegian Sea and Barents sea is to look for certification from the Marine Stewardship Council (MSC) usually indicated on packages in stores.

Every year, between January and April, skrei migrate to the northern coast of Norway in order to spawn.

After the long voyage through cold clear waters and hard currents, the wild cod become muscular and get a firmer, whiter and more delicate meat. In Northern Norway, this seasonal fish is traditionally served as a dish called mølje. As such the fish is boiled together with its liver and roe and served with a side of potatoes and carrots.

The skrei stores its fat in its liver and not in its muscles which means that the skrei is also one of the leanest fish varieties available. Nevertheless, it is rich in omega-3 fatty acids, minerals, vitamins and proteins.

In Norway the uniqueness of this gift of nature is well understood. The fishing is most carefully regulated to be sustainable and only about 10 percent of the migrating population is taken up each year. The number of fish that comes to mate around the Norwegian Lofoten is about half a billion. About 90 percent of this will return to the pastures in the Barents Sea after the mating season.

In the fishing industry all parts of the fish are taken care of so that nothing is wasted. Not only the meat, roe and cheeks are used, but also head, tongue, liver and sides. Dried skrei is exported to Italy as Stoccafisso, whole skrei is salted and dried and sent to Portugal and Brazil as Bacalao. The head is sent to Nigeria, where it is cooked to fish stock while the stomach goes to Asia where it is enjoyed as a delicacy.

For the Norwegian coastal population, the skrei season has always been a big event. Throughout history the sea boiled of the skrei for a few months and the catch was abundant.

Only at this time of year the air is cold and dry, and makes for perfect weather for the huge fish to be stretched and hung out to dry to “stoccafisso”, or stock fish, so named from the timber racks they were hang upon to dry.

Had the skrei come earlier in the season it would have frozen. Had it come later, the catch would have rotted away. As much as possible was naturally eaten fresh but most of the catch was dried or salted. The affluence also encouraged trade.

In the arctic, with its long polar night with hardly any sun, the arrival of the skrei comes as a very important source of vitamins and omega-3 fatty acids. It is simply a miracle for the sun-starved and frozen Nordic population.

Just as all of us look forward to our seasonal firsts, the Norwegians look forward to this year’s first skrei catch. The traditional dish is called mølje, where the fish is traditionally served with roe and liver. Today the special day in Norway is Valentine’s Day, whatever the rest of the world might think of a romantic dinner with long stemmed roses and, cooked cod.

But it has its tradition and when you know the history it does make sense to serve your loved one the best and most healthy thing you can think of. So much so that that you might even choose to travel up to Tromsø to enjoy it straight out the fishing boats, under the romantic light of the flicking and tumbling northern lights.

What about the fish then?

Well, after the mating, the spawn in the water are so plentiful it visibly muddles the water. Then the eggs and sperm will float with the warm currents up north towards the Barents Sea. After a couple of weeks the eggs will hatch and the cod larvae will continue its journey while feeding on plankton. Towards the autumn the larva will have developed into a small cod, and they will then dive into the depths to continue towards the nutritious pastures of the Barents Sea.

After 4-5 years at home, the fish will be large enough to start its first voyage back to the mating waters of its parents, to continue the cycle.

This said, if we then look back at the 5 to 10 percent that does not venture back to Barents Sea but instead end up on our plates, how would one go about to cook this miracle of a fish to make the best out of it?

A quick look into a cookbook from the middle of the previous century, “cooking cod the Norwegian way” was not much of a problem. The recipe states: Take a pot of water, add salt, and fish. Boil for 10 minutes. End of story. (Nya Stora Kokboken, Göteborg 1965, Kokt torsk på norskt vis, p 202).

This appreciation of the produce is very traditionally Italian in its concept, that if you have something good you should not tamper with it, but only try to bring out the very best of what it is. An approach I very much sympathize with.

My take on this would be to tweak this a little bit towards a more developed fish dish, without abusing its natural quality. 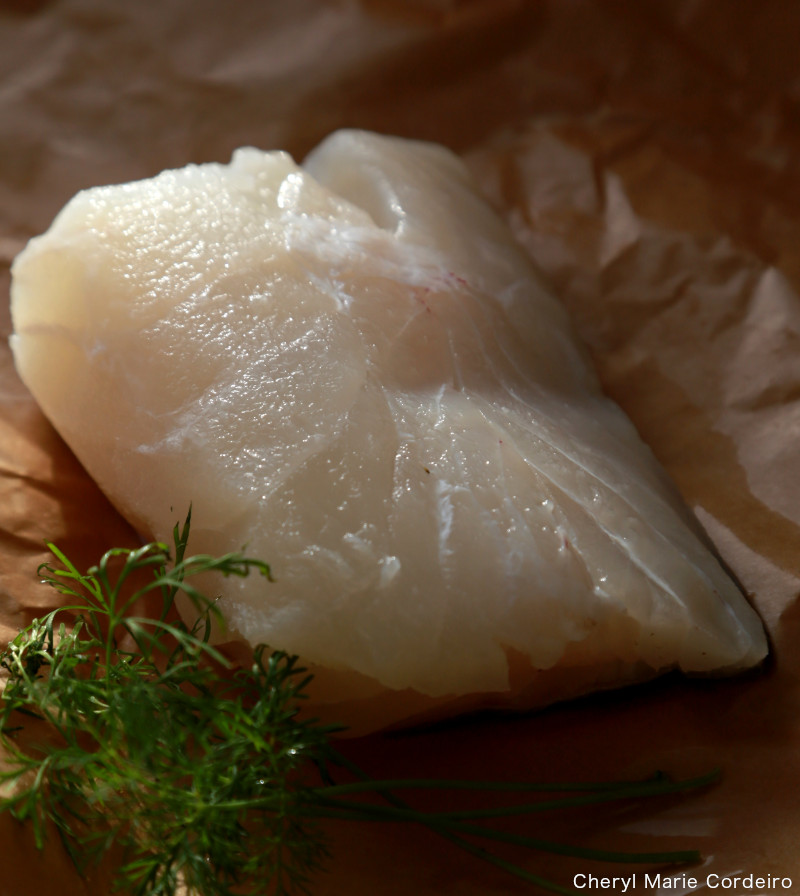 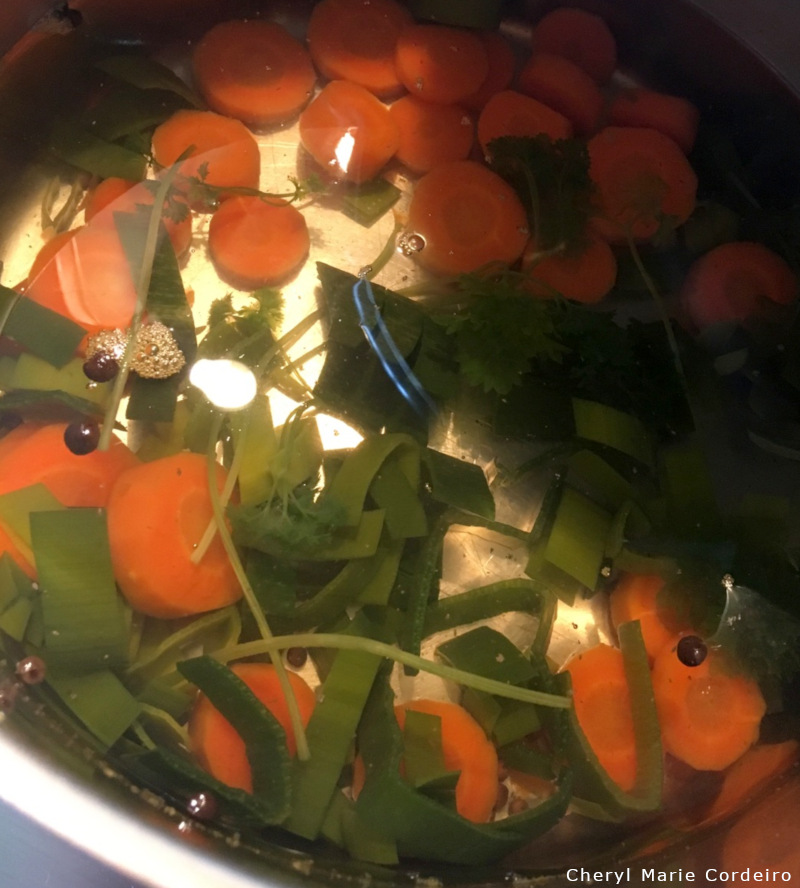 To boil the stock in advance to bring out the flavours is a good idea, after which you add the fish chunks and let them cook at a low temperature, so that the pieces would cook evenly throughout the whole pieces.

About one cup of salt over the cut fish pieces would firm up the meat a little bit and make it hardier towards the boiling. Some salt also enhances the flavour. I let it stay like that for about one hour while on the side cooking a traditional fish stock out of carrots, 10 cm worth of the green end of a leek, some white pepper and a few corns of allspice. 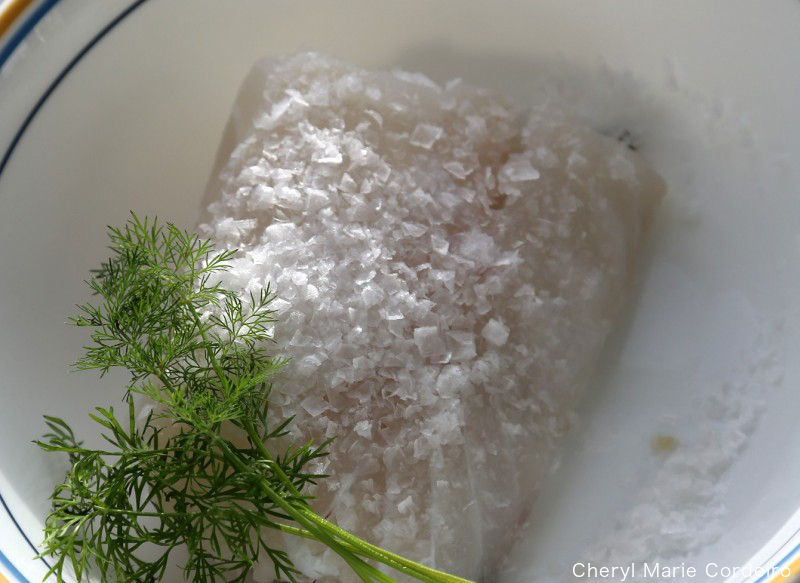 I have always felt that some salt over the cut fish pieces firms up the meat a little bit and make it hardier towards the boiling. It makes the meat look whiter and adds to the flavour. With a royal fish like a skrei cod, I’d use Maldon.

Around 56 centigrade is the ideal temperature for fish to be done without falling apart and I aimed for this here too. I used a thermometer to keep an eye on the progress. Boiled potatoes would be a given accessoir, as is a few slices of lemon. If you haven’t been too heavy handed with the salt, the stock will make a delicious base for a fish soup, even with the fish taken out of it. Just sayin’. 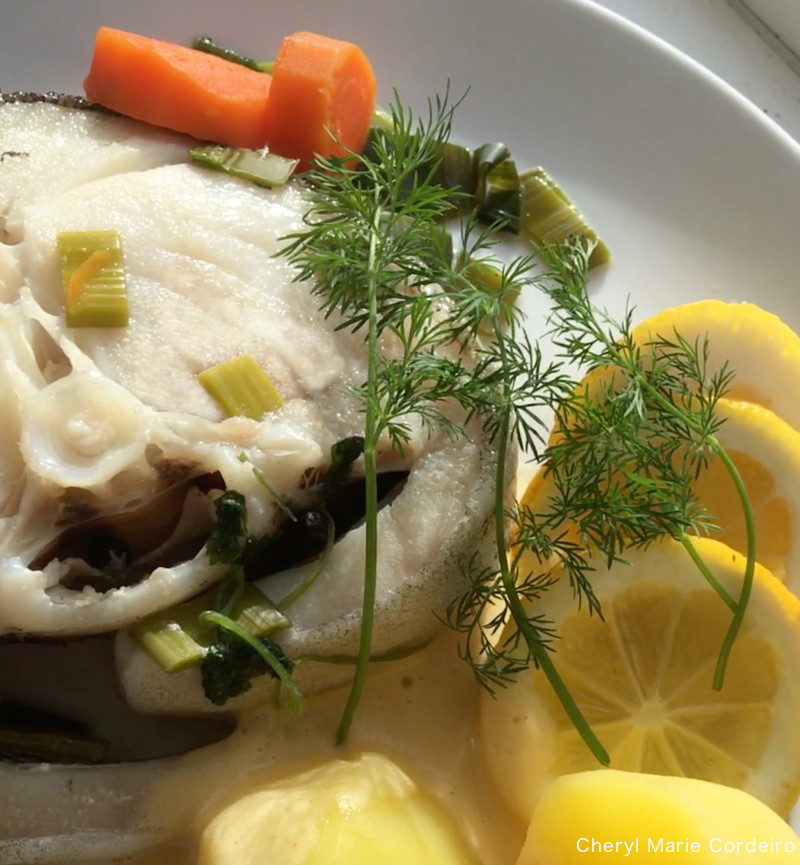 The flavour and texture of skrei is unique because of its migration life pattern.
It’s full flavour and firm texture to the flesh has made it a highly sought after delicacy. 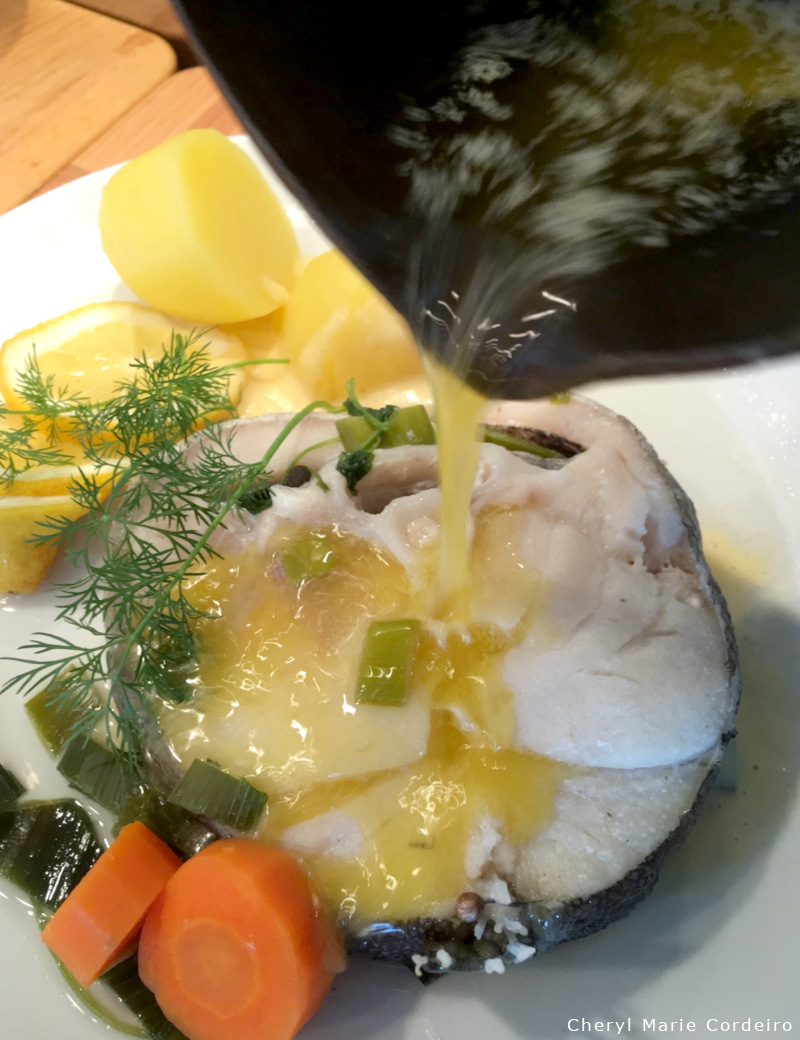 Regarding any sauce, I was uncertain, since the point is to enjoy this brilliant fish without tampering too much with flavours or worse, hiding it. So I settled for a light Hollandaise which is basically three egg yolks and some melted butter, spiced up in my case with some cayenne. Then for good measure and since the skrei is a remarkable fat free fish, I added a generous dash of melted butter.

Diet, we can do tomorrow.

Today, we celebrate the arrival of one of the best fishes on the planet to the Nordic dining table.