A few years ago when in Singapore, I came across a café that served hamburgers with black buns. It was a novelty at the time. I asked the kitchen to the café how the buns were made, and they said they used food colouring. I searched both online and in bakeries where I spotted black loaves of bread, for various means to bake black buns. My search returned several alternatives. Some recipes used squid ink, others used charcoal. One of my absolute favourites used black sesame seeds.

When I was a child. I remember eating sesame seeds compressed and moulded into small candy bars. Caramelized peanut candy bars were also available from the local convenience stores. I couldn’t give up the opportunity to bake some black sesame seed bread when I came across some recipes online.

When baking using only seeds or nuts, an internet search will find you recipes if you look for keto or low-carb bread. If you’re a fan of nuts or seeds, this is a nice bread to bake at home.

Two variations of this bread are shown in this blog post. The videos show a flatbread version that used only black sesame seeds, whilst the bread loaf shown in pictures contains a mixture of seeds that include flax seeds, chia seeds and white sesame seeds. For my purpose compared to the recipe, I substituted Himalayan salt for Seaweed salt in the black sesame seed loaf. 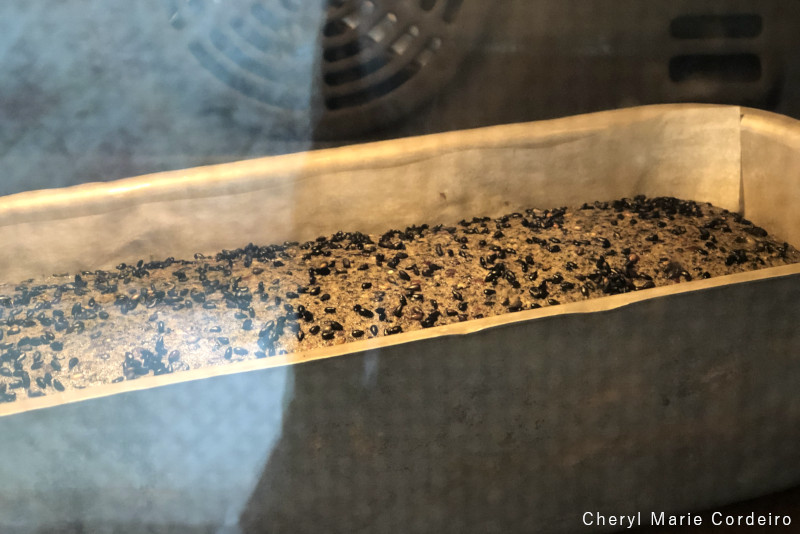 Spreading pâté over the bread, laid over with pickled cucumbers. The corner was taste nibbled.