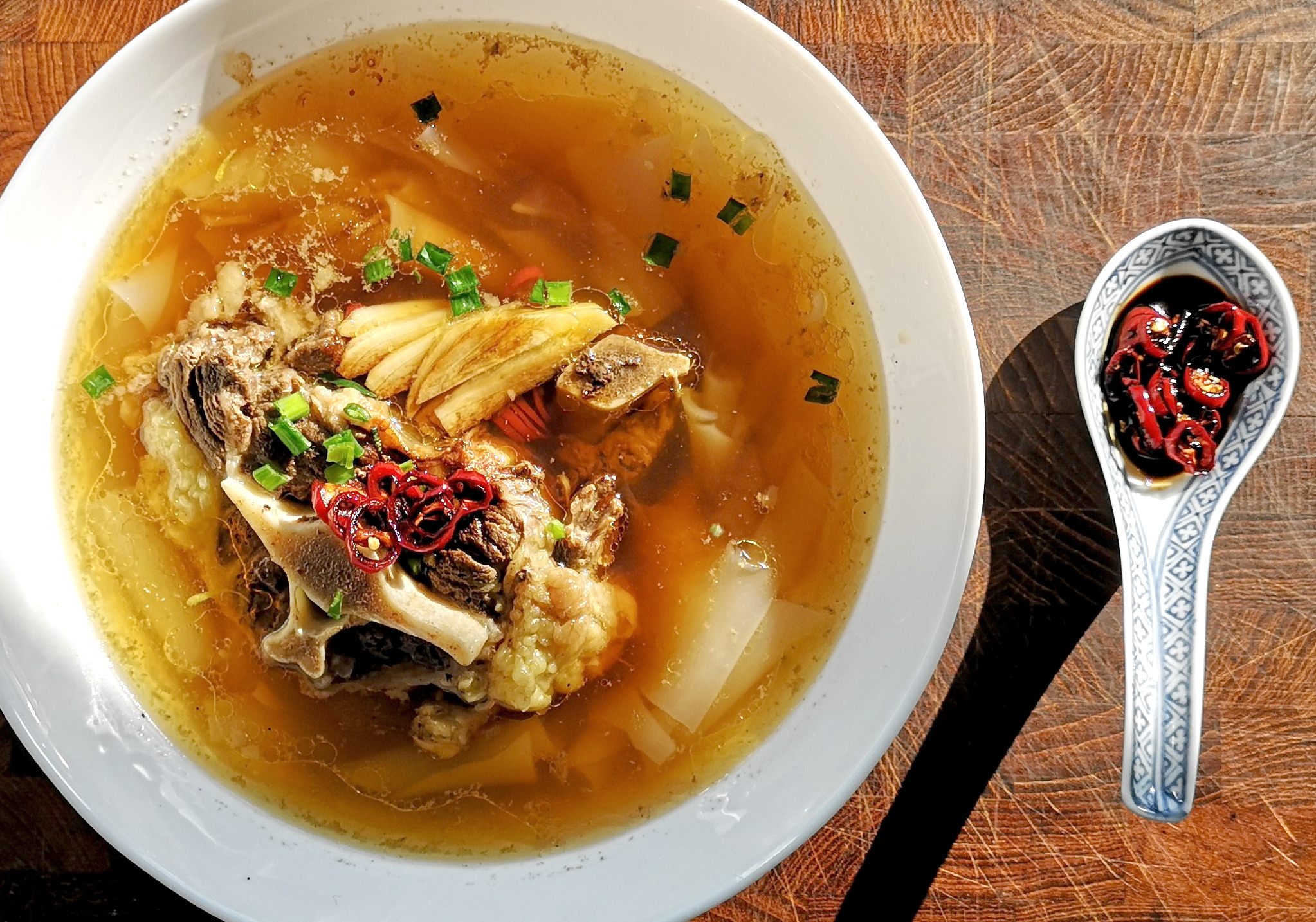 When you´ve lived almost an equal number of years in one part of the globe (Asia) as another (Scandinavia), it comes a point in time when you realize – right, I´ve managed to get some oxtails from the nearby farm, super! Now what and how to do with them? And that question is legit because I found myself standing over the kitchen counter, staring at the oxtails unwrapped from their paper package, with at least 3 recipes in mind. Coupled with recipe juggling, I wondered who in the family was going to enjoy which version the most. The go-to recipe in Scandinavia is based on the classic French style, using tomato puree, root vegetables such as carrots, celery and herbs such as thyme, bay leaf, parsley, then topping it off with some port/sherry. You have the Eastern European recipe sans tomato puree but using chopped tomatoes, potatoes, leeks and ground allspice. “I’m bored with my cooking. You come up with something.” was the feedback. When in Scandinavia, that meant, go as Far East as your recipe books take you, and see what inspiration you can find.

I bounced around 2 Asian beef soup recipes, comparing aromas, flavours, what was available in the fridge and kitchen pantry, plus personal mood and weather of the moment. One called for hard spices such as star anise, cinnamon and Chinese 5 spice, and the other had ginger, spring onions and a touch of soya (preserved soy beans actually, but that was nowhere to be found in my kitchen). Figuring that spring was in the air and the general atmosphere was brightening, I decided on the ginger and spring onion version. Oxtail soup, light. With chillies, quite some, because you just can´t take Singapore food carnival out of the girl even after two decades in Scandinavia. I had no rice noodles, so that was swapped for kway chap style flat rice sheets cut into small triangles.

The oxtail broth was made in a dutch oven. The meat was browned and then the pot filled with water and placed in the oven at 80°C for about 8 hours. The aromas that filled the kitchen brought my mind to when last I had a craving for a bowl of beef noodle soup in Singapore. That was more than 2 decades ago, at Scotts Road. The beef bowl seller had moved and I needed to settle for another meal at the time. But other than that, I had very little craving, if ever, of this particular version oxtail light of boiled with ginger and spring onions, garlic etc. Memories associated with beef noodle soup go back further for me, to when Lagoon at East Coast Park was still arranged in their canopied clusters of winged hawker stalls. It was always crowded and you needed to wait to get a table on a weekday night. There was a stall that sold absolute knock-out beef noodle soup, and that I loved. But the renovations came and the stalls were rearranged, after which I never found my way back to that beef noodle soup at Lagoon. The Singapore scenescape has such continuous ebbs and flows of development that the psychology of change gets ingrained in you. Something new? Alright, let´s run with it and see what happens. Two days into introducing a new food item and “What? You haven´t tried laksa lava toast? Under which HDB block were you hiding?

It´s difficult to create a bland oxtail soup/broth of any sort even if you fail to add salt and pepper to it. Oxtails are so full-bodied in flavour, it´s a forgiving ingredient in that sense. This oxtail soup Asian light was certainly not the ordinary fit into the Scandinavian context of spring with Easter lilies and lilacs coming into bloom, but it was somewhat of a throw-back in time. Of an activity, a place and a time that passed a little too quickly and too soon, and in that, will always be remembered.

Dining across cultures and the Chinese mid-autumn festival, in Sweden