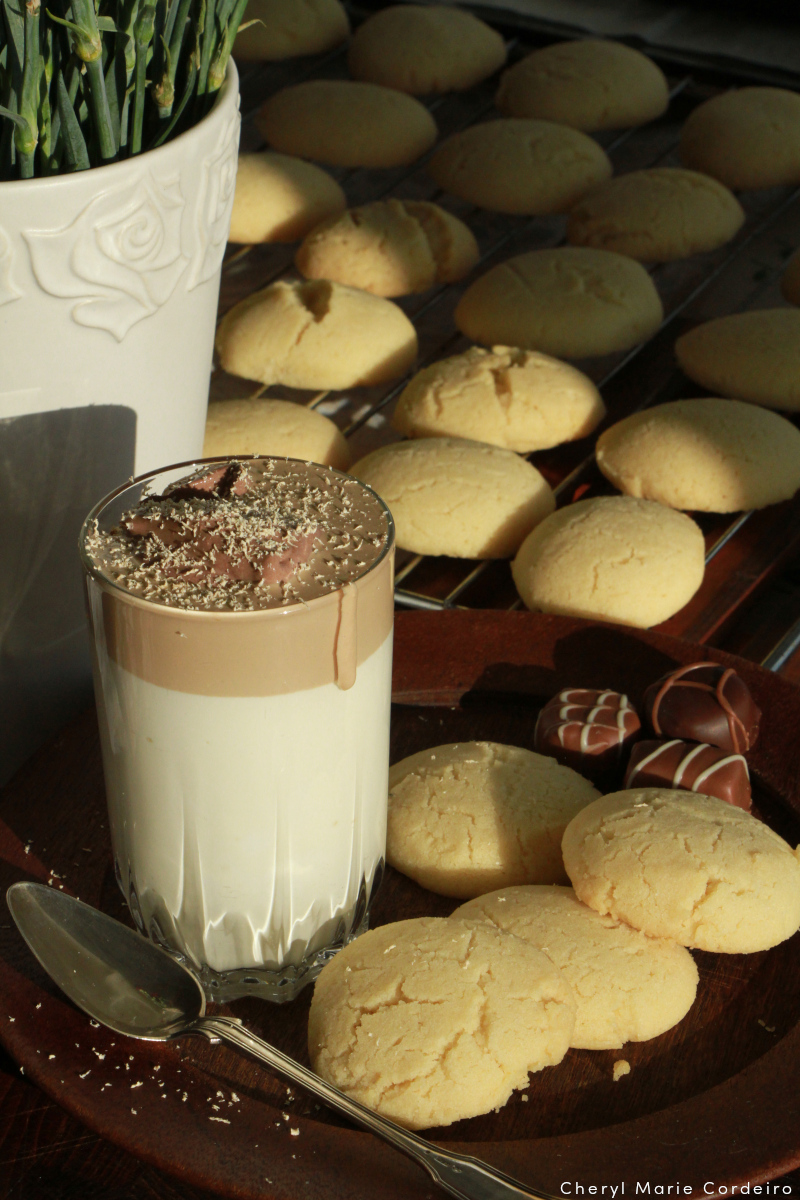 Shortbread is one of my mother’s favourite cookies. Growing up in Singapore, you could find the Singapore version called sugee cookies in the smaller covenience stores in the neighbourhood heartlands. They were sold in plastic cookie jars and you could buy one for about ten cents a piece. From the 1980s onwards, as Singapore developed, the smaller convenience stores gave way to larger grocery stores. Favourite places of mine to visit, food shops and streets changed. Available consumption developed too, the shortbread consumer market segmented and grew more sophisticated. You could now find luxury versions of shortbread, as well as neighbourhood heartland versions.

For a few years after I had left Singapore in the early 2000s to live in Scandinavia and upon my return trips, I found it increasingly difficult to find heartland neighbourhood baked sugee cookies. There was of course Bengawan Solo sugee cookies, but there were some variations I felt I missed. One afternoon, my mother thought it nice to roam Chinatown. She wanted to buy some cotton threads with which she could crochet a new blouse. As we walked the inner alleys and streets of Chinatown Singapore, I chanced upon a shop that sold traditional, old school biscuits. I identified the biscuit tins immediately and could not help but pull my mother inside the shop with me in swift motion.

“Mommy! Look!” I cried, “They have these traditional biscuit tins!” I was excited and beyond disbelief. It’s been some years since I even laid eyes on such biscuit tins! My mother smiled and nodded. “I haven’t seen these in the longest time – what, since I was a child?” I said, exploring the biscuit tins that seemed to stand from floor to shophouse ceiling of the shop. The biscuit tins were designed each with a see-through panel on the front, so that you could always tell exactly which type of biscuit it housed.

“Can I buy some to bring back to your home?” I asked my mother. I was way past 30 years old by that time, but thought it still polite to ask for purchase permission, since it would be her living room coffee table that was to be littered with all new biscuits I was about to buy. “You can buy, but don’t buy too much. Your father and I don’t eat so much these days.” she said. “Okay.” came my reply, and I had racked up almost six sorts I was going to purchase, for starters. There was the one with a floral pattern cut-out with jam in the middle – apricot? Or raspberry? Or strawberry? How about all 3 sorts? And then there was the one with the lemon cream sandwiched between two slim and elongated biscuits. And then there was the chocolate and vanilla cream filled one, not oreo. There was also a cofee cream filled version that I ought to get. And then there were the small buttons with colourful icing on top. Now these icing topped buttons, I had to get at least 500g worth because how else are you going to guarantee that you cover all icing colours and shapes on top of each biscuit button? And then there was the one topped with a cashew nut, and the one topped with a peanut. Were there chocolate versions of those? I could not remember, but if I found them, I would buy them too. I mean, you need to cover the range right? I don’t believe there was a single content in those biscuit tins that I didn’t love. And not forgetting – sugee biscuits. Needed to grab a couple of hundred grams of those too.

I think somewheres along the way, I saw my mother shake her head and roll her eyes in my direction. She might have evenly politely stepped out of the shop. But she was kind enough to let me bring back to her home, the haul of more than 3 kgs worth of biscuits. Who was going to finish them? I didn’t know. My brother’s children? I was simply happy to see them all in one bag, and on one coffee table. What a luxurious treat found in Chinatown, Singapore!

The Swedish version of sugee biscuits is called Drömmar or Dreams. And oh, are there not many things to dream about, literally, from now on? Characterised by a crumbly, light as cloud, melt-in-your-mouth texture, it ranks pretty high on the favourite biscuit list for Swedes. It happens to be the family favourite here too, together with havreflarn or oatmeal cookies, which is the other bake featured in this blogpost.

Havreflarn is a tongue-in-cheek perfect SARS Covid-19 2020 social distancing entity, because this biscuit spreads flat, broad and crisp when baking and needs plenty of room of its own to grow in the oven. Admittedly, I failed to give some of them ample space of their own, and had to use a cookie cutter to separate them after baking, hence the resulting neat straight edges seen on some of them.

Different from the Singapore sugee cookies, the Swedish Drömmar uses hjorthornssalt, translated to read “deer horn salt”, or ammonium carbonate. It is a raising agent that works much like baking powder, and best used for dry bakes such as these dreamy biscuits.

Back in Chinatown Singapore, hauling the heavy bag of old-school, traditionally baked biscuits in one hand, the conversation between my mother and I resumed once I stepped out of that gorgeous biscuit shop.

“What goes into sugee biscuits?” I asked.

“Nothing what.” she replied, matter-of-fact in a half shrug of shoulders. “Flour and sugar and ghee that’s all. Easy to make.” she said.

“No, I mean, what is the ratio of semolina to flour. Sugee biscuits, right? So you must use semolina flour?” I inquired.

“No. No sugee. Just plain flour.” she replied.

“No sugee?” I shot back, “At all?” – I was astounded. Funny how I never took time to look up this recipe.

“Yah. You can ask you father. His colleagues love baking sugee biscuits. No sugee. Just flour.” she repeated.

“Really?” I was incredulous. “Who named it ‘sugee biscuits’? And what kind of biscuit is called ‘sugee biscuit’ without using sugee in it?”

She shrugged and walked on. Approaching the shop with cotton threads, my mother’s focus was now complete on all things to do with crochet. I just had to look this up myself when I got back to her place. 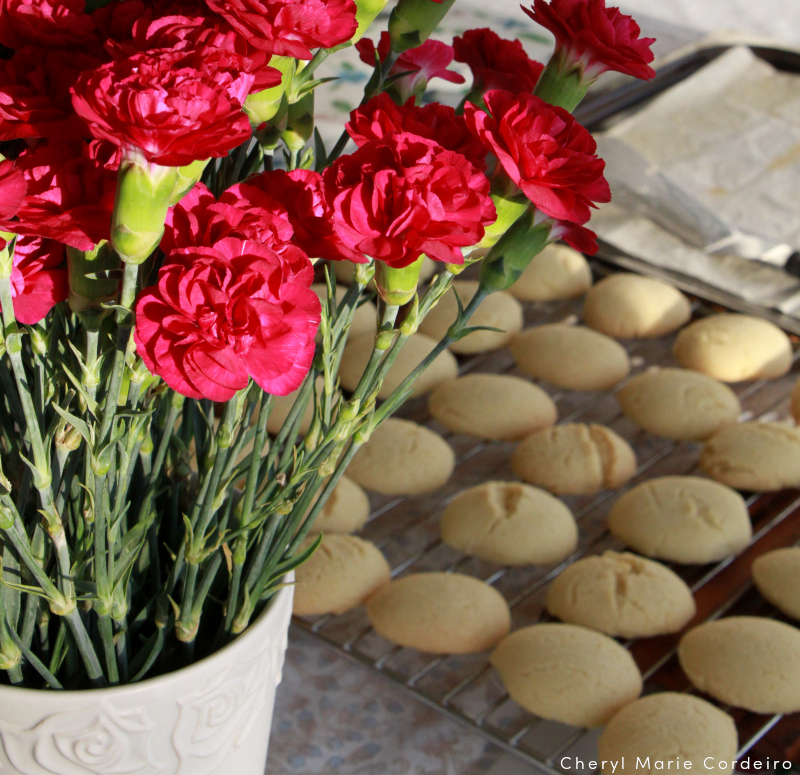 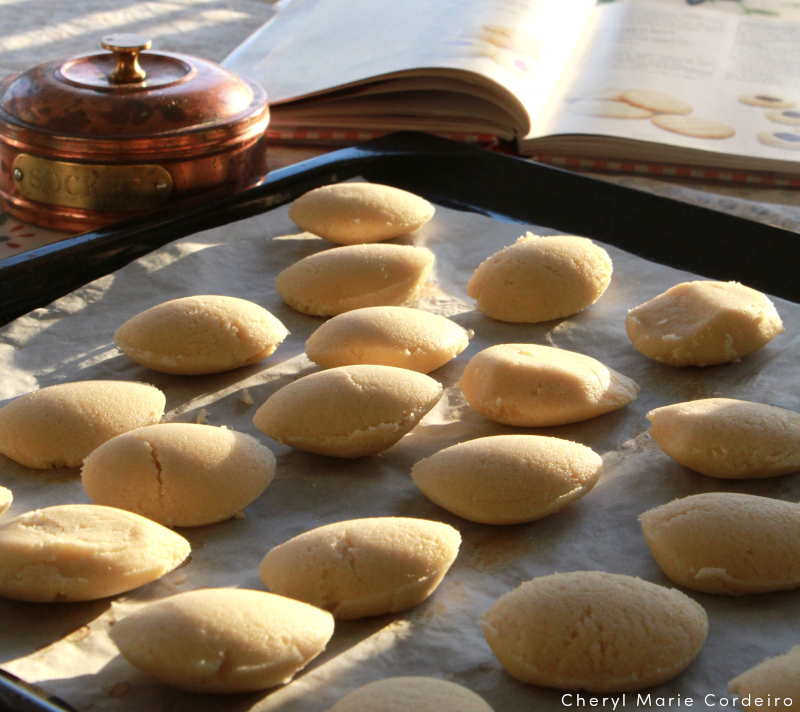 Drömmar, prior to baking. 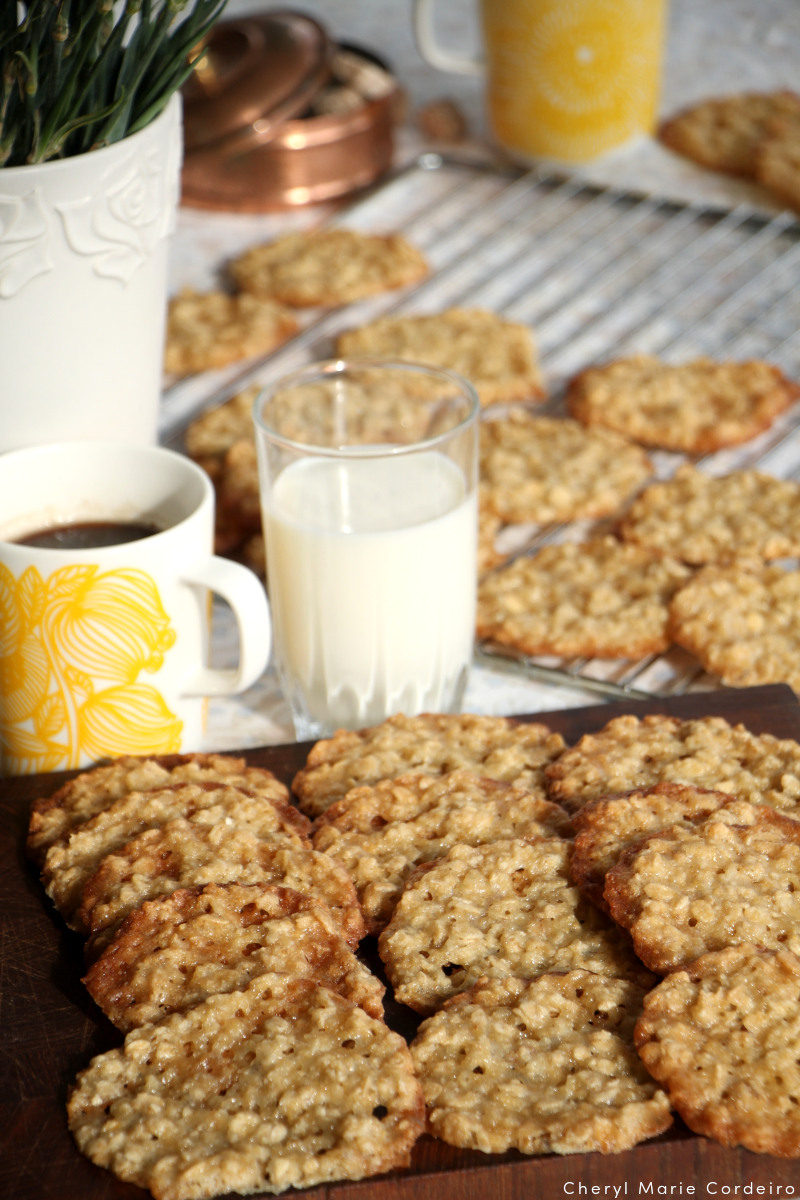 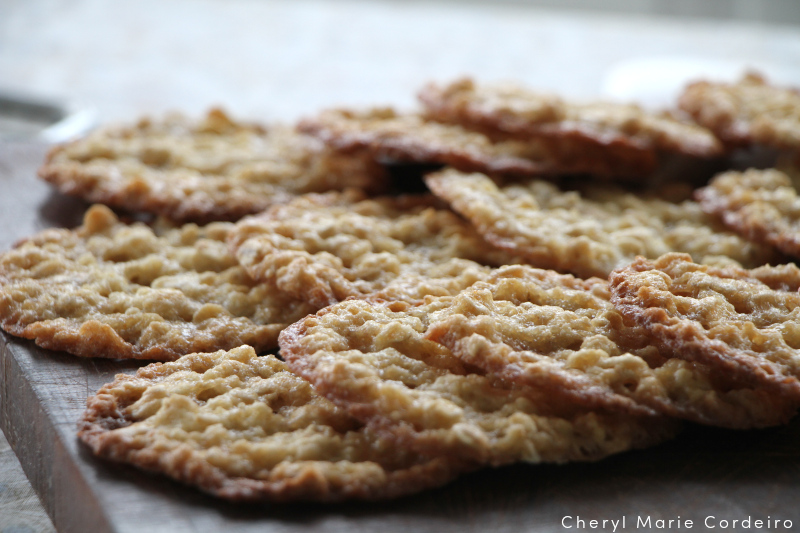 Thin and crisp once out of the oven, these serve up nicely with a cold glass of milk.

The trajectory of no madeleines