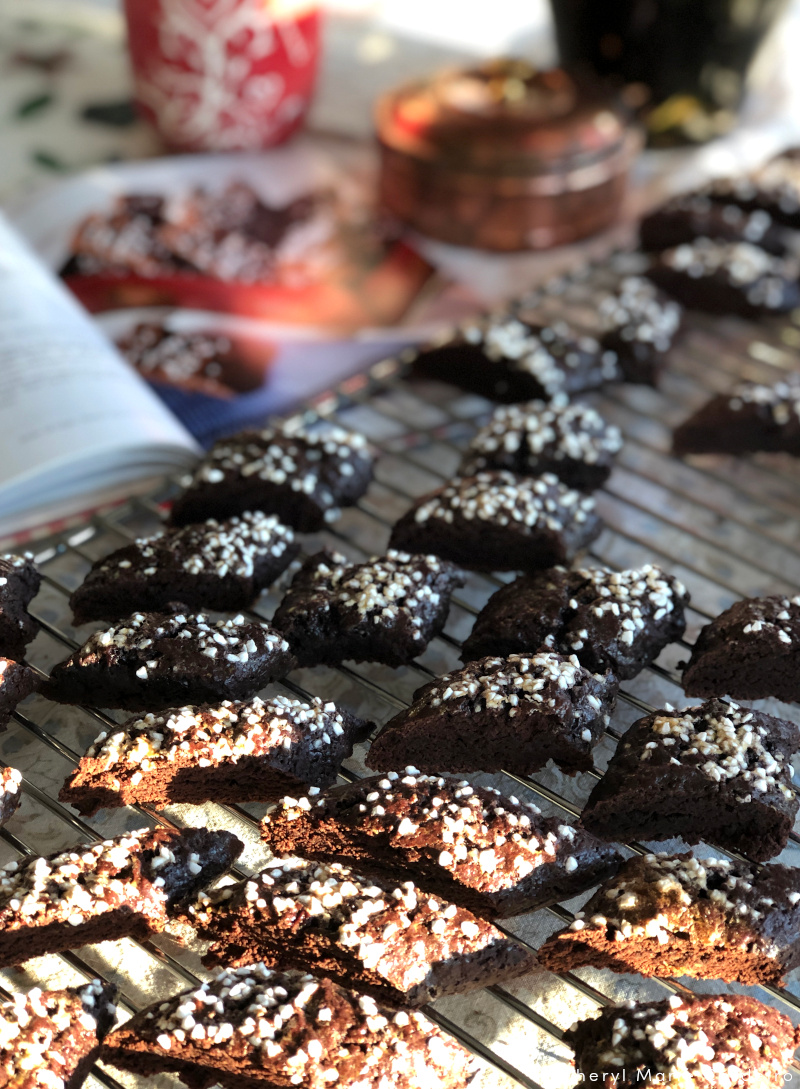 Märtas skurna chokladkakor or Marta’s Chocolate Slices are the quintessential Swedish chocolate cookies that are a staple at cafés in Sweden. When I got to Sweden in the early 2000s, I found these chocolate cookies in large boxes sold in grocery stores. These distinctive looking chocolate cookies are also available at grocery shops in some Nordic countries.
Text & Photo © JE Nilsson & CM Cordeiro 2020

In the past weeks, I’ve taken a culinary walk down memory lane to when I was growing up in Singapore. I’ve been revisiting in my mind, bakeries and coffeeshops of where I’ve eaten and spent time for afternoon tea with my parents and father’s mother from when I was five or six years old. Katong and Marine Parade were favourite areas to spend Sunday afternoons. Katong is the predominant living quarters of Eurasians and there were many confectionaries and bakeries that sold pastries and cakes liked by the Eurasian community. Two places I frequented as a child with my parents, and with my father’s parents were Katong Red House, at 75 East Coast Road, and Chin Mee Chin Confectionary at 204 East Coast Road. Chin Mee Chin was located at the corner of Chapel Road where the Holy Family Church is still located. They opened in the 1920s and was famous for cream horns and chocolate éclairs, the favourite pastries of my father’s father, and my father. I grew up eating plenty of those, together with Portuguese egg tarts.

Labelled as “old school” pastries and biscuits in today’s context in Singapore, some of my absolute favourites were the basic mix and bake of flour, butter/ghee and sugar (lots). Chocolate biscuits or cookies were certainly on the list but they hardly came plain. Most chocolate biscuits in cookie jars at home were made to sandwich lemon or coffee cream frosting. The vanilla cream frosting filled chocolate Oreo cookie, was a much later addition to my cookie repertoire even if it was launched in the early 1900s in the USA. In a seeming quantum moving of Time backwards, it has also been interesting to observe the 2012 limited edition Lemon Twist Oreos (a variation of their original lemon Oreo in 1920s) because that flavour combination took me back to when I was five or six years old, eating lemon cream frosting filled cookies from Singapore neighbourhood heartland bakeries.

Brownies and mud pies as concepts and as desserts were a much later try in my life, at around 1990 when Hard Rock Café established its Singapore outlet. This was just about a decade before I had moved to Sweden and was introduced to the sticky and fantastically delicious Swedish chokladkladdkaka. Chokladkladdkaka was hands down my new favourite chocolate bake when I arrived in Sweden, and Marta’s chocolate slices is what I see as a variation of this recipe. Less sticky than the chokladkladdkaka, Marta’s chocolate slices pack well in picnic baskets for that summer outdoors. During any other season of the year, they are often found at a traditional Swedish fika table at offices and at home.

Marta’s Chocolate Slices make for a quick go-to recipe. Being a quintessential Swedish chocolate cookie, the recipe for it can be found online. And no, I wouldn’t say these chocolate slices remind me of any of the old-school biscuits I ate from when I was growing up in Singapore in terms of flavour and texture. Rather, the languid mental connection I’ve found interesting is how children in the Nordic countries grow up with an entirely different set of traditional cookie bakes that in turn, lays a different knowledge base and foundation of heritage culinary experiences between Scandinavia and Southeast-Asia.

Being a cultural boundary-spanner and having spent almost equal number of years in the Nordics as in Southeast-Asia, I’ve found it a small privilege to be able to pick up recipe books from either region of the globe in understanding of the different cultural culinary heritages. Not in the least, to be able to enjoy the different cookie aromas, flavours and textures preferred in each region, the tasting of some can in some instances, bring me back to certain places and certain times spent with different people. 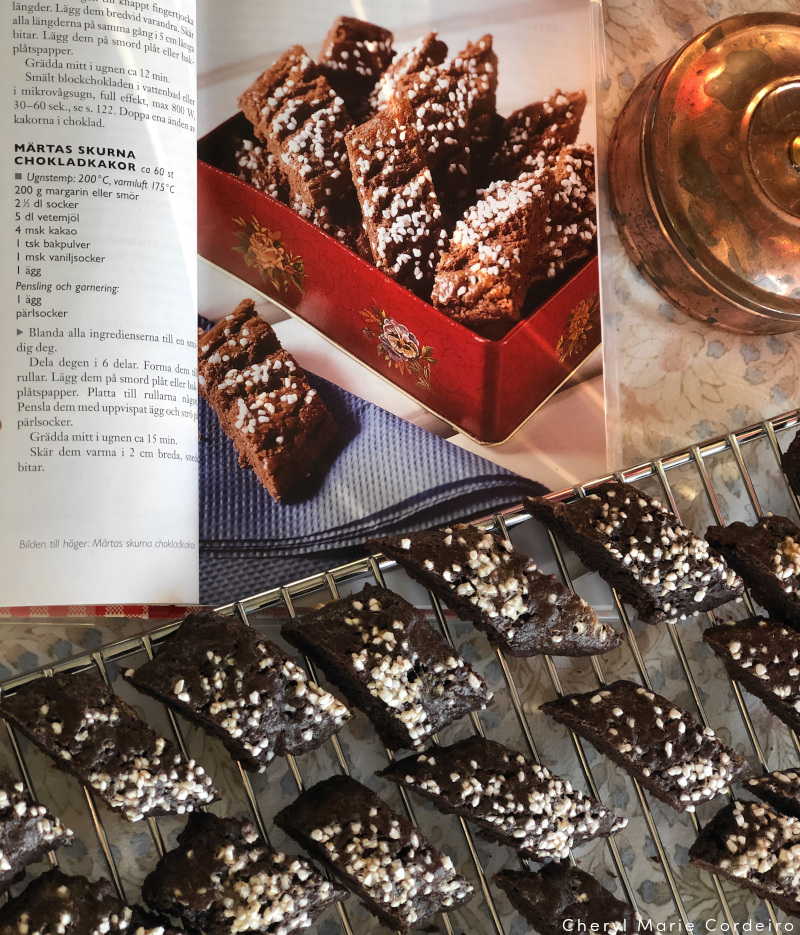 These firmer chocolate slices are a variation of my absolute sticky-chewy favourite, the Swedish chokladkladdkaka. 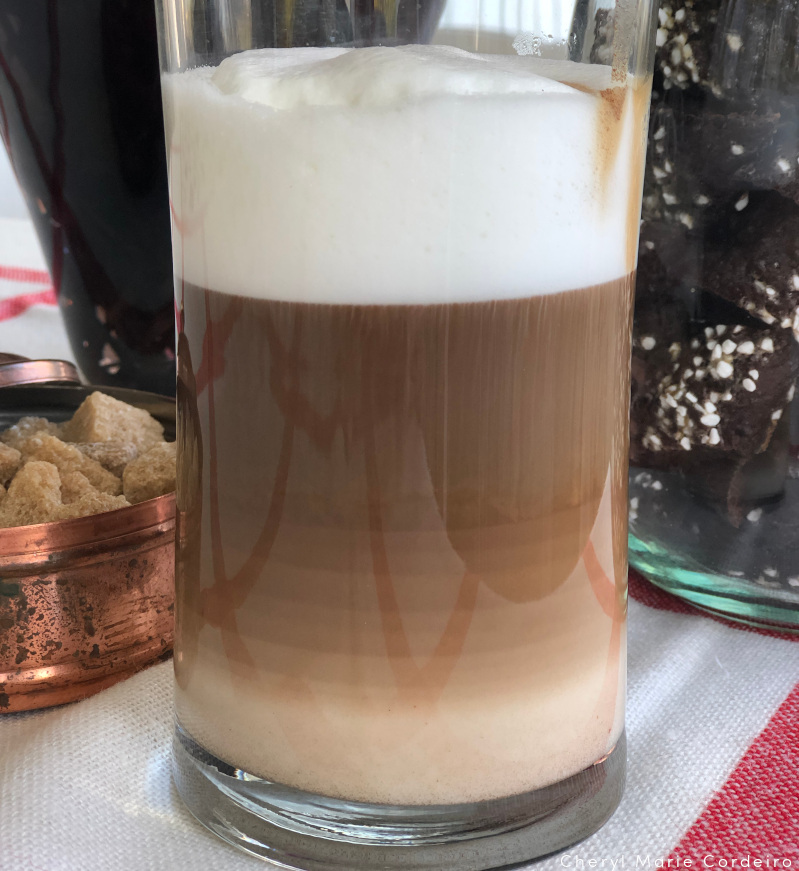 Coffee ombré, a perfect complement to Marta’s Chocolate Slices, if chokladkladdkaka is not at hand for access.