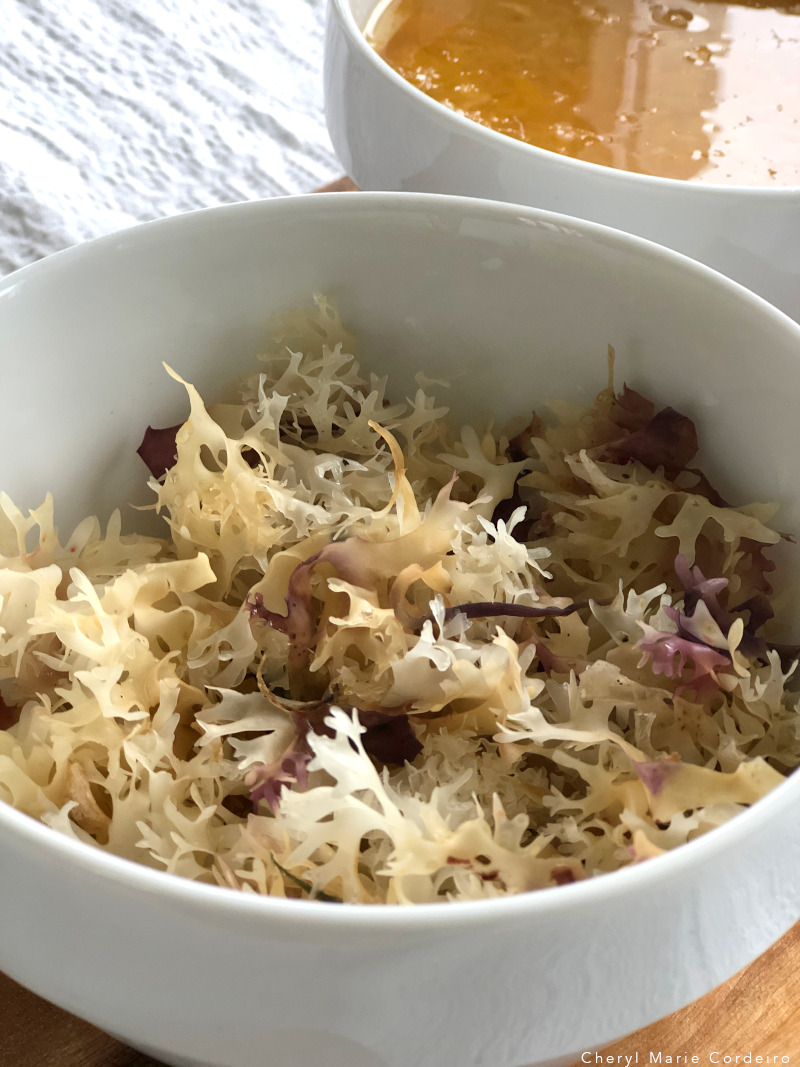 A couple of months ago, I had an intense interest in learning about the different seaweed varieties and their uses in Nordic cuisine. There are some that are being cultivated in the Nordic countries for commercial purposes, but the more palatable varieties of red and green seaweed are often harvested wild. I found a seaweed company in Ireland that harvested seaweed from the Irish coast and acquired a sample variety of red and green seaweed, one of which is called Irish Moss or Sea Moss.

The main property of the Irish Moss is carrageenan and it is often used as a thickener in puddings, sauces and soups. A traditional use of Irish Moss is to make Irish Moss Pudding, combining full cream milk or double cream, sugar, eggs / egg yolks, vanilla pods and the seaweed. The result looks and tastes much like panna cotta, on condition not too much Irish Moss is used in the recipe. The method is to soak the seaweed in warm water for about 10 minutes and then strain off the water from the seaweed before using. I used it to thicken a batch of homemade orange lemon marmalade. To avoid having to strain the marmalade, I placed the Irish Moss into a coffee filter and secured the top with brown string. The marmalade was put to boil and after about 20 minutes, the Irish Moss was lifted away and the marmalade left to cool before storing. The idea was to have this as an option as topping or filling to the Swedish sugar cake / sockerkaka.

The Swedish sockerkaka was an absolute madeleine moment for me when I was first given to try it when I arrived in Sweden. It not only reminded me of the bite-sized Indonesian / Malaysian kue bahulu, but of some instances of childhood memories of Chinese New Year visits to relatives on my mother’s side where kue bahulu would be served as one of many sweet cakes at the coffee table. “Eh, you like kue bahulu right? Here, I bought this year, extra for you.” in a mixed language of Baba Malay and English, that was what my mother’s mother once said to me, on one Chinese New Year’s visit to her place. I thought it was a heartwarming gesture from her. At another older aunt’s place, the conversation ran, “Ehh, nice to see you again girl. What you want to eat? I have peanut cookies, pineapple tarts –“, “Do you have kue bahulu?” would be my query reply.

I have since learned to bake the Swedish sockerkaka in my favourite combinations, with lemon zest, orange zest and sometimes, a marbling of vanilla and chocolate. In this instance, I combined some orange marmalade (sans Irish Moss) into the batter, turning out a lightly flavoured orange sockerkaka. There are alternative recipes of the Swedish sockerkaka that can be found on the Internet, depending on your preferences and needs. For my own purposes, I used the basic recipe of 3.5 dl flour, 2 dl sugar, 2 eggs, 75g melted butter, 1 tsp baking powder, 1 tsp vanilla essence, 1 dl orange marmalade and 1 dl double cream. I dusted a baking pan with some breadcrumbs and let bake for about 45 mins in a 175°C oven. When the sides of the cake begin to pull away from the pan, it’s (usually) done.

The Swedish sockerkaka is a versatile bake. If in a hurry, these can be store bought and put together in almost any combination of flavours and fillings to make an excellent party cake. And I had the initial idea to build one such party cake with the sockerkaka I baked today, but decided kue bahulu style will do, dusted over with some icing sugar. Sometimes, simple is what you prefer. With coffee. 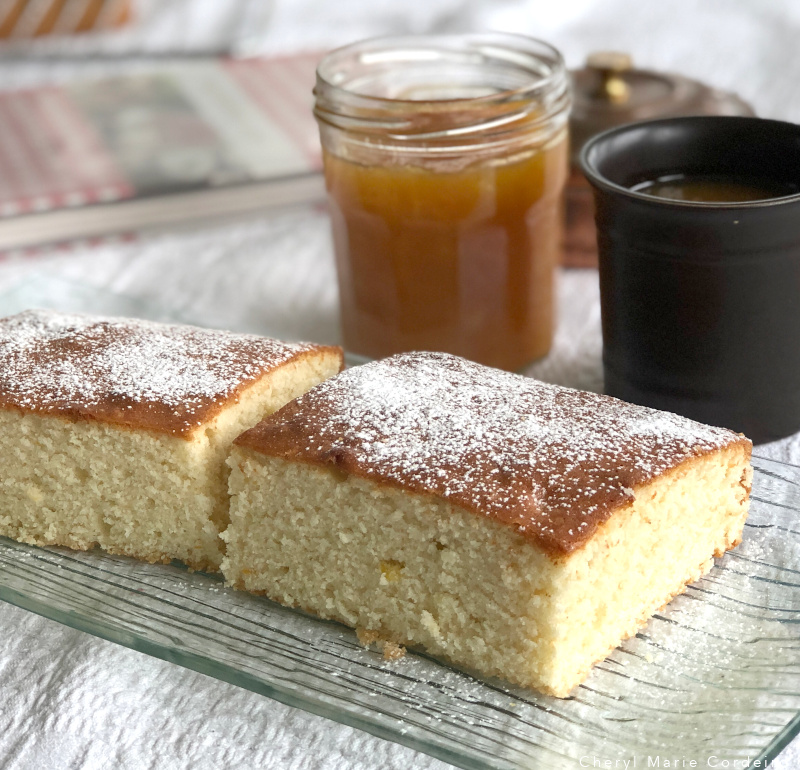 The Swedish sockerkaka, dusted with icing sugar and served on a glass plate made by my parents. They gifted the glass plate to me on their last visit to Sweden a few years ago. In the background, Irish Moss infused orange marmalade. 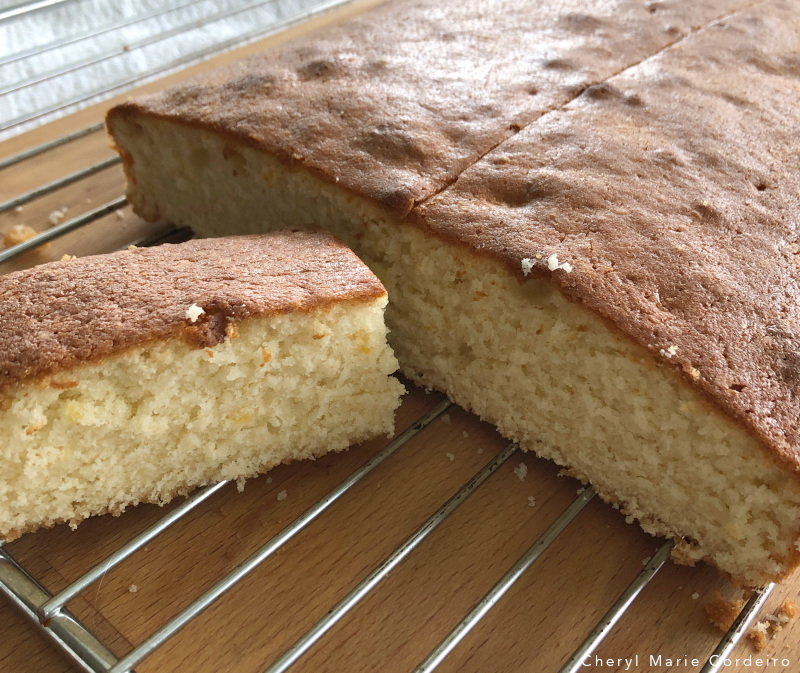 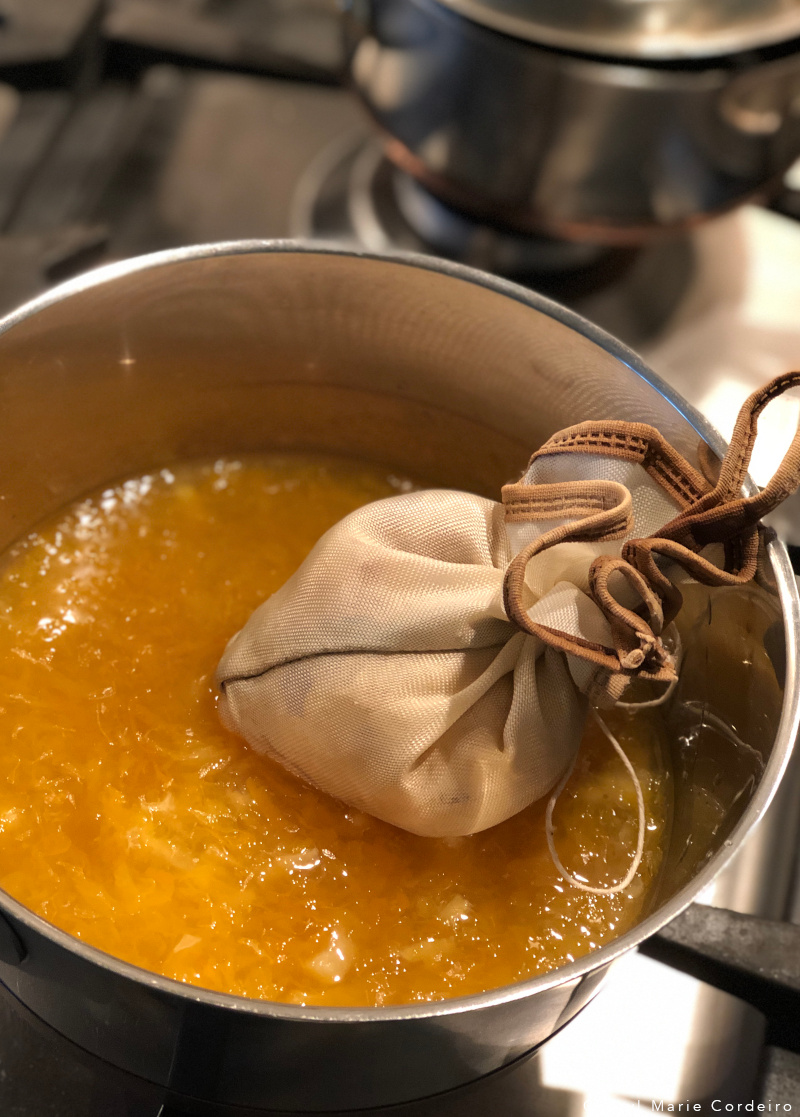 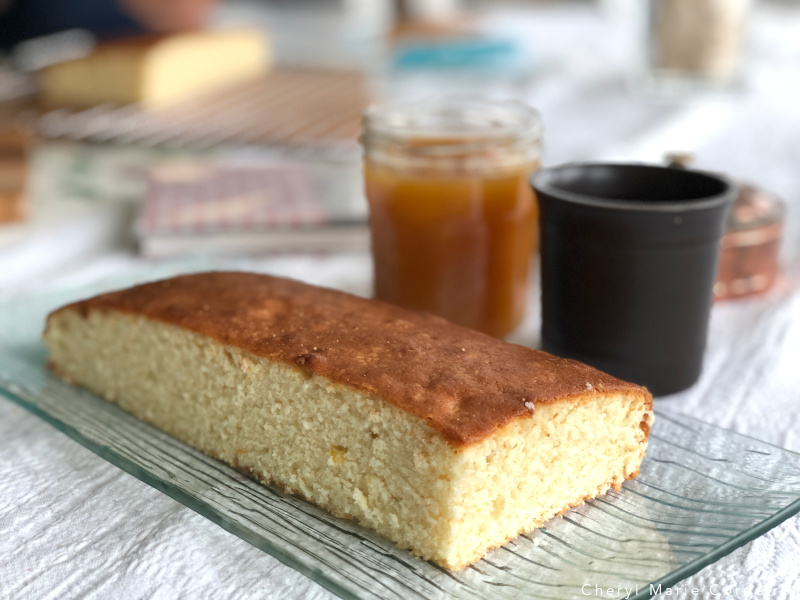