This festive season, my personal reflections are on questions of personal adaptation to new environments, and new living conditions. Adapting to a new environment and culture can be challenging. In my case, I´ve found myself adapting to being in new places and living conditions elastically, meaning to say, some fittings are easier done in some contexts than others. Taking the example of local food appreciation, it took me several years of living in Sweden before I stopped shopping at local Asian grocery shops. Food is closely connected to personal childhood experiences, the reason why from Proust, madeleines can have their moments that draw you into another world that once was yours. And there were so many petite madeleines that made up my personal Singapore narrative that it would have been a point of decision to live forward. So it took me a few years before I began to genuinely enjoy Nordic foods, from where they were cultivated at local farms, to how they were processed (salting, drying, smoking etc.) and how they were served. So while even some Swedes would disagree with semla hettvägg, I am for one, loving it.

In the case of living in Northern Norway, I observed that I had rather quickly embraced Northern Norwegian food and dishes, such as skrei. Skrei is the migratory species of cod (Gadus morhua) from the Norwegian-Arctic cod stock. During skrei season, the fish is caught, the meat is broiled together with its roe and liver, and served usually with boiled or mashed potatoes. This dish is called skreimølje. Other traditional Norwegian foods include preserved herring, salmon prepared in almost all manner and design, and locally farmed meats from sheep, cows and outdoor farm raised pigs.

You can probably tell how far environmentally and culture adapted someone is by what they put or bring to the Christmas table. Apparently, on our Christmas table this year is the ribbe made in Norwegian style. Although you could argue that it looks very close to the East Asian / Singapore sio bak, there are several key differences from cut of meat, to marinade used, and method of preparation.

The ribbe cut is sometimes known in Sweden as ´the Norwegian rib cut´ and a proven country-of-origin effect (COE) on the Swedish market. The rib bones come attached to the pork belly and the rib bones are sawed to serving pieces without breaking the fat or skin of the overall cut of meat. The Norwegian ribbe takes plenty of influence from the Bavarian grilled Schweinshaxe.

The marinade in its most basic form are salt and black pepper. Not much else. The meat is left out in the cold to marinate for 3 days (or use the refrigerator if you don´t have winter temperatures). If you´re making this for the Norwegian Christmas table, you´d bake the ribbe on a bed of garlic, onions, carrots, apples and raisins / prunes. The skin of the pork belly is sliced diagonally to create a diamond pattern over the top. And most importantly, the ribbe has to exit the oven grill with a thick layer of crackling. There is no ribbe without the crackling, and everyone would leave the Norwegian Christmas table sitting in disappointment. More glögg with vodka anyone?

Back to the idea of new environment adjusting. I think I´m doing alright, if not a little surprised at the speed of self-adaptation, in genuinely enjoying Norwegian dishes. It probably helps that Norway and Sweden share plenty in history, from language to food, albeit with nuanced differences. There are a couple of instructional videos to be found on the Internet, on how to make ribbe, if you looked for the keywords “norsk ribbe”.

On my part, I think this makes for a festive addition to this year´s home Christmas table. For braver Norwegian culinary adventures, smalahove anyone?

Usually a vegetable trivet will suffice. But here, I´ve placed some Höganäs ceramic cups under the meat. I thought it might have made the meat too dry during the baking. But it worked alright with the bain marie in place. 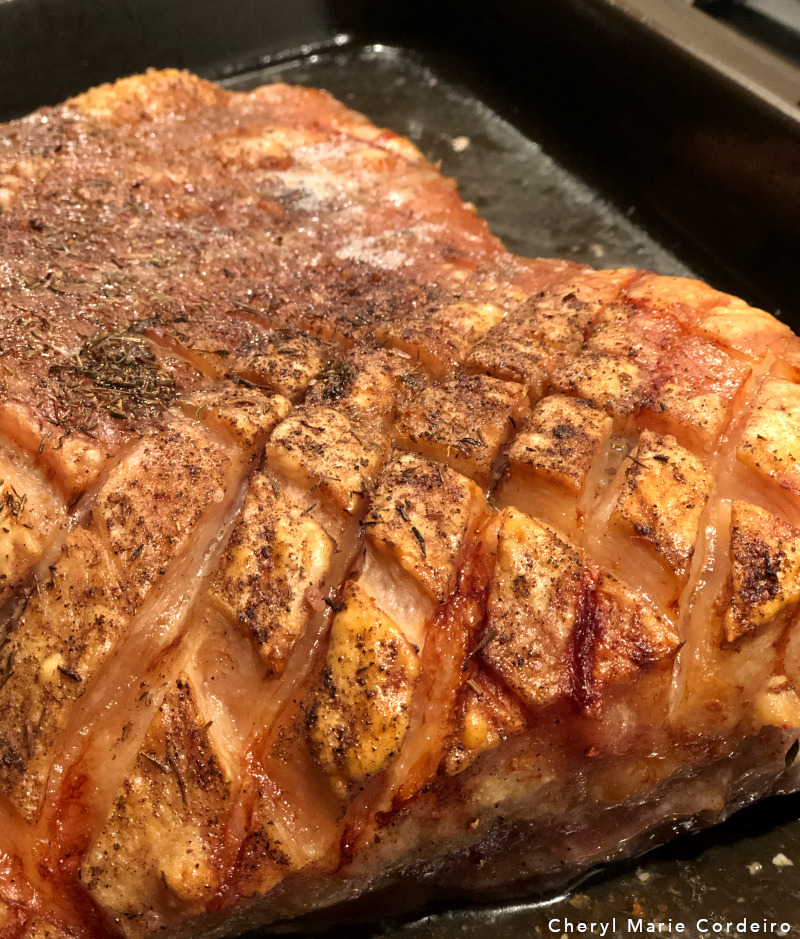 To the question of how to get that brilliant crackling on top, I think that was already decided with the cut of meat. With high enough temperatures, usually around 250 deg C, and enough time, the crackling makes itself. You just need to watch that it doesn´t burn. 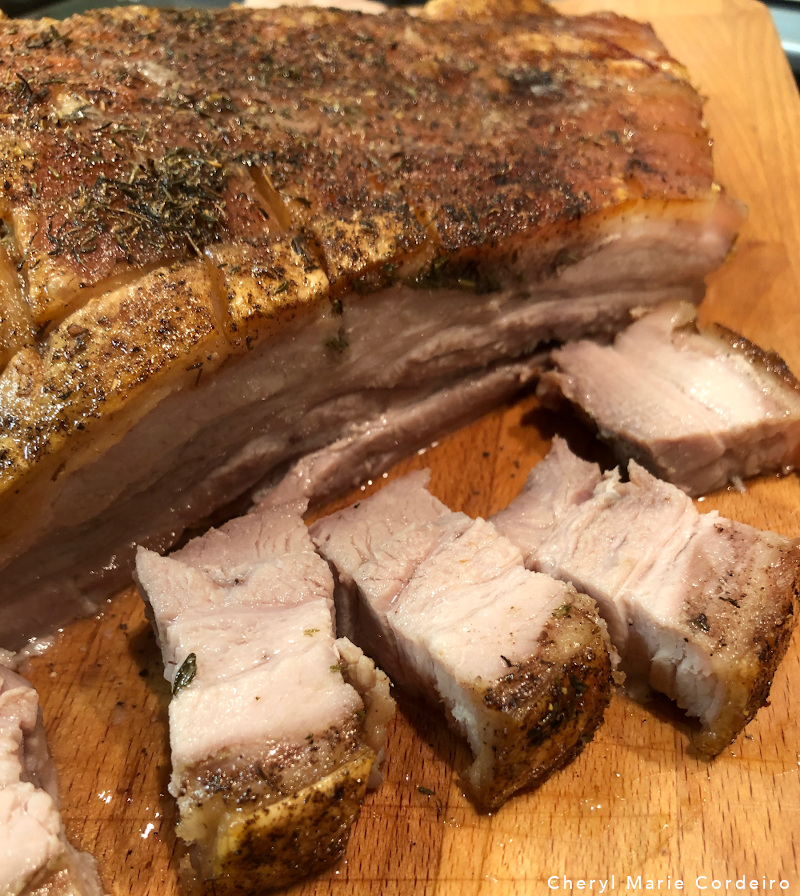 This was cut a little too modestly in size. Ribbe is usually calculated at 500g per person in recipes, and served in heftier portions to a plate.