Our first decision in Florence was that we should go out to explore the city by foot. A good friend set out to book a table at her favorite place and after some time walking in and around the old streets of central Florence, we ended up at Trattoria Quatro Leoni at Via Dei Vellutini 1/R at Piazza Della Passera. 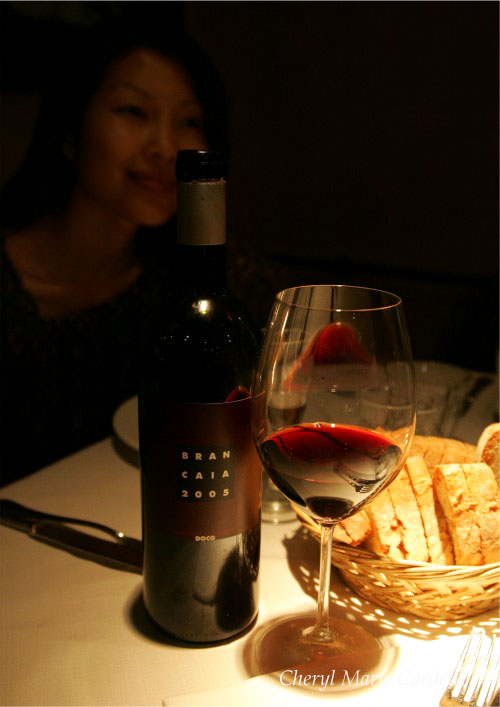 Our waiter and sommelier recommended us a Brancaia 2005 as well suited for our purpose and budget. It’s a full flavored red Tuscan wine of decent quality. In 2007 it received quite positive reviews in the Swedish newspaper, GP.

Quatro Leone or The Four Lions is a mind-bogglingly old restaurant. Having originally opened in 1550, both Dante Alighieri, members of the Medici family as well as Michelangelo himself could well have sat on these chairs before us. Well, maybe not. The chairs were probably replaced in the mid 1990s when the restaurant was renovated, restoring some of its old charm while removing centuries of kitsch. 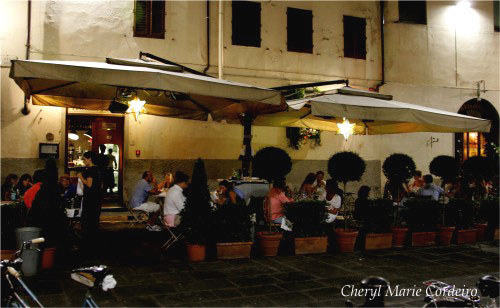 The restaurant is central but still difficult to find, and it has a large proportion of locals in the eating crowd, both being good signs

For those unfamiliar with Florence in Tuscany, the region is famous for its true concern of the quality of the food ingredients, and traditionally alter as little as possible when cooking. Green and fruity olive oil, garlic, unsalted bread, parma ham and parmaggio cheese plus generous helpings of black pepper are expected staples of many Tuscan dishes. 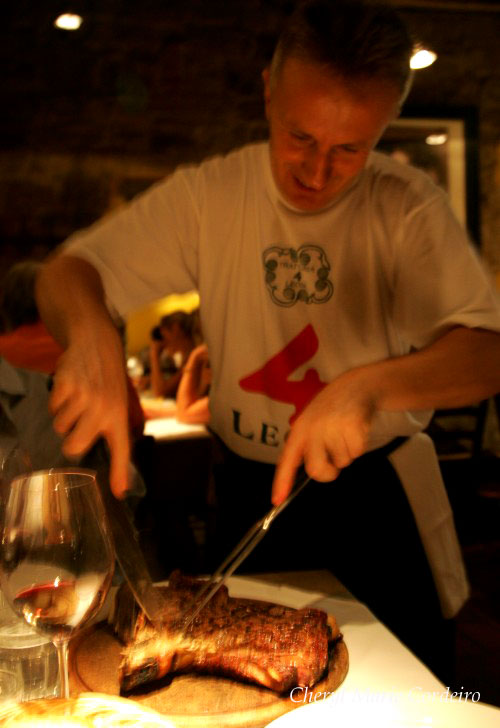 Our waiter and the restaurant’s sommelier who recomended us wines from the San Gimignano region.

While the menu at Quatro Leoni gave lots of options, the purpose of this evening was however, to experience a real Bistecca alla Fiorentina or Florentine steak. The steak itself is technically speaking a properly aged Porterhouse or T-bone cut of beef, with the filét and counterfilét and a part of the rib left inside it. The thickness depends on the animal and the cut and could be between 1-2 inches (2.5-5 cm) thick and weight between 2 to upwards of 5 lbs (1-2.5 kg) per steak. 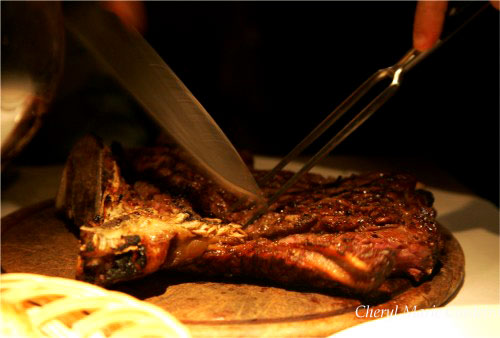 A minimum order of this steak at Quartro Leoni is 1 kg.

Unique for this area of Northern Italy and carefully bred on the rich local fodder, it is the meat from the ancient Chianina breed of cattle that gives a genuine Bistecca alla Fiorentina its special character. Naturally, to present this delicious meat in its most favorable way, the steaks are barbecued on hardwood charcoal and served with a slice of lemon, a few green side dishes and preferably with a bottle of good local red wine.

Dining in Italy is an affair that if properly done takes up an entire evening. Several hours later – full, happy and dazed – we ventured out into the velvety dark and warm city night. Our steps soon brought us out over one of the many stone bridges crossing the River Arno. 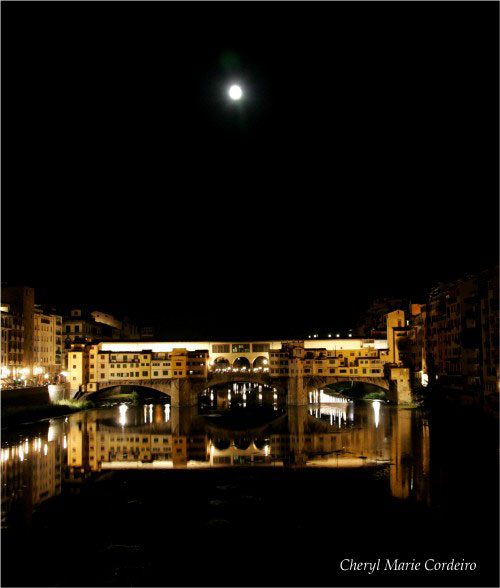 The Ponte Vecchio, the Old Bridge, in Florence offered a spectacular sight when we crossed the immediate nearby bridge over the River Arno.
Photo: Jan-Erik Nilsson © 2008, for CMC

It was a night to remember and I felt connected to all generations that had lived here before and experienced festivities that has made it into the history books, but also disasters so terrible that they inspired Dante to write his Divina Commedia right here and to pick figures to fill all circles of hell with persons straight out of the City of Florence history books.

The full moon was sat low immediately over the Ponte Vecchio, “The Old Bridge”, famous for its old jewelry shops built hanging out over its sides, reflected into the water. Just there and then it felt like it was there looking at us, celebrating with us, our first night in Florence.

Regarding where to eat in Florence, Sally’s Place is one of the best pages on the Internet I have found thus far, with few advertisements between.