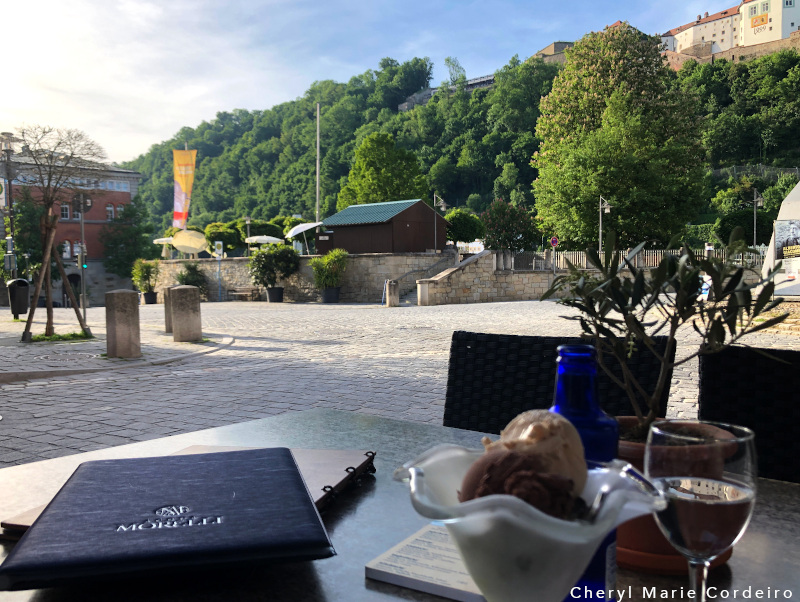 It could have been a Prinzregententorte, a Kaiserschmarrn or an Apfelstrudel. But when in Passau, in Lower Bavaria, in Germany, I of course just had to go for a homemade chocolate gelato. I attribute this choice to identifying with the Boii tribe who technically came from northern Italy in 2 BC?
Text & Photo © Angeline Lim, CM Cordeiro & JE Nilsson 2022

There is something about the heavy historical presence and influences of the monastery founded by Severinus of Noricum (c. 410 – 8 January 482), and the confluence of the three rivers Danube, the Inn (river from the south) and the Ilz (river from the north) that made me feel at home walking the narrow cobbled streets of the city of Passau in Lower Bavaria, Germany. I went to school in a Convent run by French missionary nuns in Singapore. The Convent was the next best choice as I understood from my parents, after failing the criteria of being a silent child and one who would do well in a life of prayer and solitude for the Carmelite order.

I arrived in Passau in late afternoon, just about an hour or so before sunset when the city began to quiet down before picking up its night-time activities. The compact city area of 69.58 km² makes it perfect to bike or walk between destinations. I found out that my hotel accommodation from the main train station was about a 2 km walk, and I asked for directions on the street when I seemed to have made a wrong turn. The locals seemed horrified when I suggested I was trying to walk 2 km to my hotel accommodation, and kindly called a taxi for me. So arriving at my hotel was not a problem.

Having settled quickly, I was able to put feet on cobbled stones and roam the silent inner city walls, exploring the premises of St. Stephen’s Cathedral / Der Passauer Stephansdom and admiring the city’s gothic and baroque architecture. 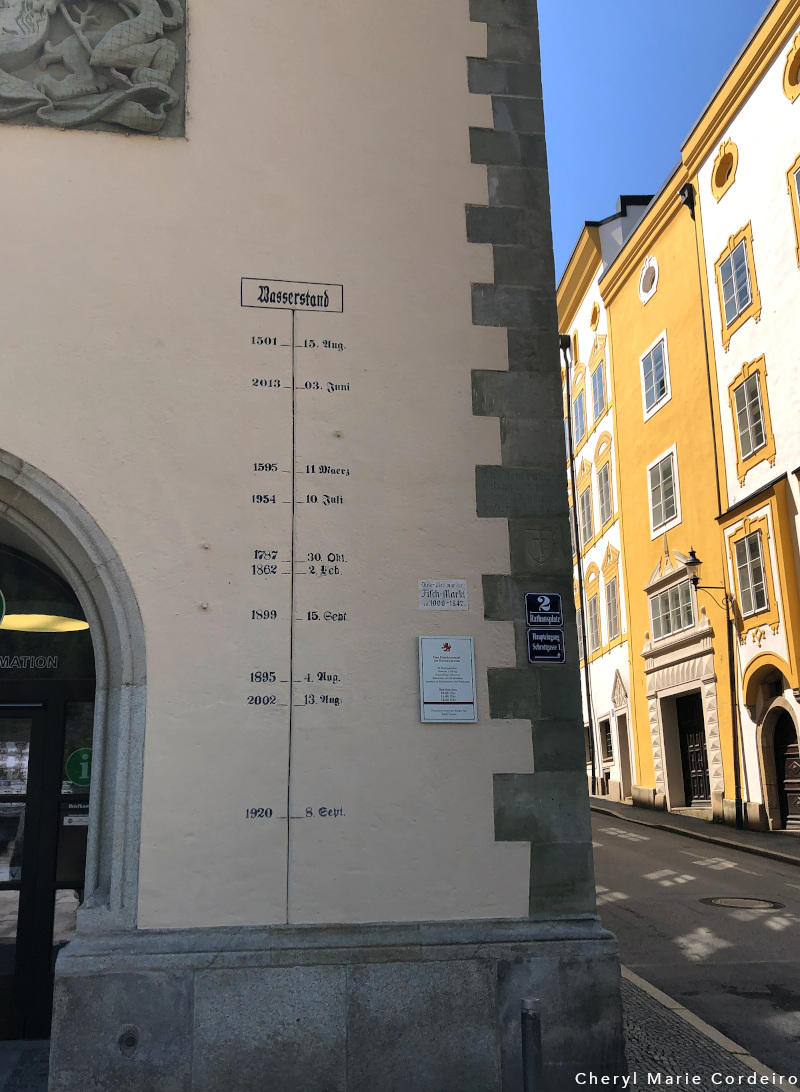 Passau, the City of Three Rivers, does have its seasonal lack of charm. The markings on the walls indicate the height of river floods reached from historic times to modernity. The 2013 June flooding was highest the city has experienced in over 500 years.

Passau is also known as the Dreiflüssestadt or the City of Three Rivers. Apart from being prone to floods, where the flood height markings on the old Town Hall wall was the only thing that struck dismay in my heart in my otherwise serene evening walk about town, Passau is a brilliant university city. Living in the Arctic City of Tromsø, in Northern Norway, which is also a university city, it is another parallel attribute about visiting Passau that made me feel at home. Here, you can expect raucous Friday evenings with plenty of drink and high volume music (regardless the genre), young adults playing catch during high summer and accidentally or intentionally sliding into the waters that nobody would consider diving into when sober. About a quarter of Passau’s 50,000 inhabitants are students at the University of Passau, renowned in Germany for its institutes of economics, law, theology, computer science and cultural studies.

I was going to stay for a few days, which would give me the opportunity to try Bavarian food. Being quite unawares of which restaurants was serving local fare, and what dishes I could look out for, on my first late afternoon in May 2022 spent in Passau, Lower Bavaria in Germany, I settled for a distinct Italian homemade chocolate gelato. And no, I never got around to try a Prinzregententorte, but had the opportunity to try a Zwiebelrostbraten, which is a traditional meat dish usually made with a combination of beef cooked with onions, butter and seasoned with paprika, Dijon mustard and salt and pepper to taste. It was gorgeous.