Mention Venice and what comes to mind are masquerade balls and since 1979, the annual Il Carnevale di Venezia.

The Venetian carnival however, had its origins from the 11th century as a celebration of the passing of Lent, reflecting the etymology of the word carnival, from the Latin carne + vale meaning farewell to meat. Michael Tieuli lends a brief overview of the history of the Venetian Carnival, where he mentioned that the carnival was thought to be an annual celebration of Doge (Chief Magistrate) Vitale Michieli II’s victory over Ulrich II of Treven (the Patriarch of Aquileia) in 1162. Ulric was taken prisoner and his release was conditional, in that he had to pay an annual tribute to Venice in the form of twelve loaves of bread, twelve pigs and a bull. It was during this time that a tradition began of butchering a bull (representing Ulric) and twelve pigs in the Piazza di San Marco to commemorate the victory.

Early documents of mask wearing in Venice could be found as far back as the late 1200s. Though an excellent way of getting attention or simply getting back at an unrequited love, masked men were banned by the Venetian Law in 1268 for example, for throwing of scented eggs at women. By the early 1400s, the wearing of masks and costumes was well the norm at the Venetian carnival. In 1436, the Mascereri (makers of the Venetian masks) had their own guild.

Masks feature all sorts of practical purposes, the lighter representations of which can be found in the movie Casanova (2005), which was filmed in its entirety in Venice. Whether it is to mingle freely with those in a different social echelon as oneself, to return discreet favours or to have a secret love affair, the use of masks creates and encourages intrigue and mystery.

Located at Castello 5369/70 Venezia, it was a late evening when out in Venice that we came across Il Canovaccio, with its vibrant shop window displays of hundreds of Venetian carnival masks!

We met Ivana, who made many of the masks that were on display and was currently working on a few more. She conducted classes on making masks for both individuals and groups and her inspirations were traditionally theatrical, though she produced modern ‘fusion’ designs such as a plumed Columbina with veil.

There are many shops in Venice that display and sell masquerade masks, but the atmosphere at Il Canovaccio’s is unbeatable. Ivana’s warm and friendly enthusiasm in her work draws you irresistibly into the world of Venetian theater and secret fantasy. At Il Canovaccio, you can be whoever your heart desires and escape to into a world surreal, if only by choice of mask and cloak.

There are several categories of traditional Venetian masks, of which the Colombina is one of the more practical in that its partial coverage of the face allows its wearer to eat and drink with ease. The story to the origin of the Colombina mask though is somewhat different. Designed for an early Commedia dell’arte actress in the 15th century named Colombina, it was said that her vanity (or what I would call a good knowledge of her looks), made her reluctant to camouflage her beauty behind a mask. The half-mask was designed to accommodate her.

The Colombina mask, as with other categories of masks, come in a variety of designs, modeled around its basic design. Determined to make a purchase, I settled for the black velvet Colombina with tri-coloured plumes pictured below. Another favourite of mine were the Voltos (full faced masks) with dramatic feathers framing the face, which reminded me very much of Trinidad and Tobago in 1999 and their carnival costumes.

There are masks of the Sun and the Moon and then there are the Animal masks, amazing in their details and colours. One of the more popular of animal masks would be the Gatteo or the Cat, representing the Venice Carnival Cat.

Planned all the way to 2010, the Venice Carnival 2009 opens on a wicked Friday, February 13 and runs to Tuesday, February 24, 2009. Masked and costumed balls take place almost daily during this time and on the last Sunday of the carnival, the Mascheranda takes place at the Pisani Moretta Palace where guests can enjoy a gala dinner in the Tiepolo Saloon.

A ball connected to Giacomo Casanova himself is Il Ridotto held at the Dandolo Palace.

The palace of Enrico Dandolo, who was the Doge of the city-state of Venice from 1192 until his death, was the first place in which a Ridotto or public gaming rooms were opened during the early 1600s. It was open during the Carnival months and run by nobles who had strict rules of play, involving the use of masks for those who frequented the gaming rooms. Giacomo Casanova (1725-1798) considered the Ridotto, the heart of the XVIII Century magnificent Carnival of Venice, where he frequented. It is said too that the Dandolo Palace is the stage setting and backdrop for his conquests, which is reflected in the Hollywood rendition of Casanova (2005), the movie.

The website Venice Carnival, Italy, has booking resources to the event. And if you happen to have planned a trip to Venice, don’t miss Il Canovaccio’s and their vivid array of Venetian carnival masks. 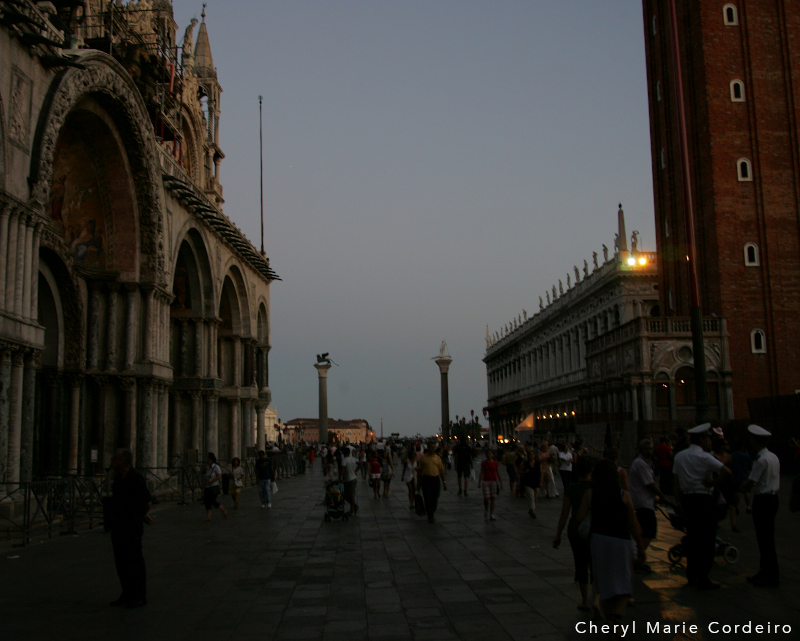 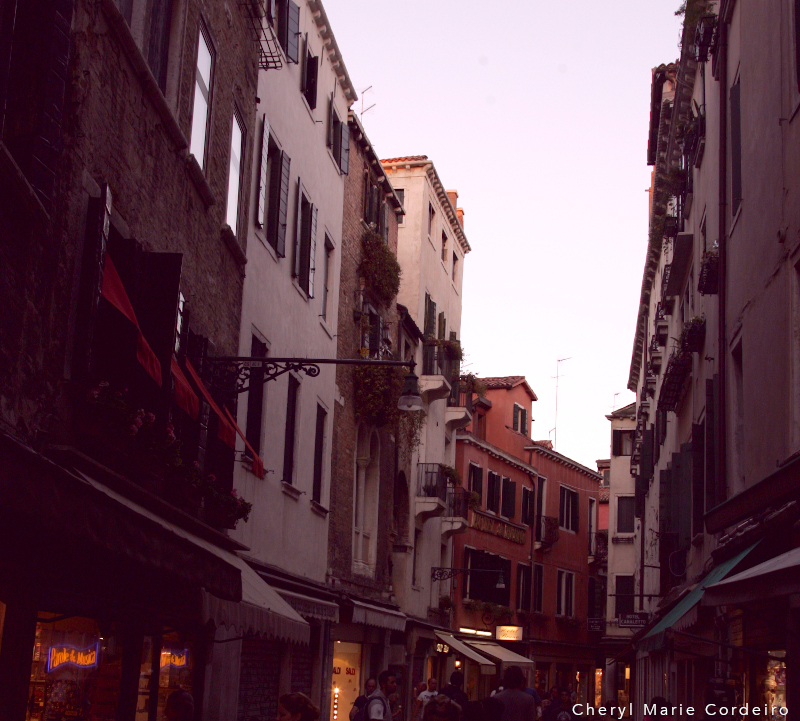 At the Il Canovaccio shop window along Castello 5369/70 Venezia. 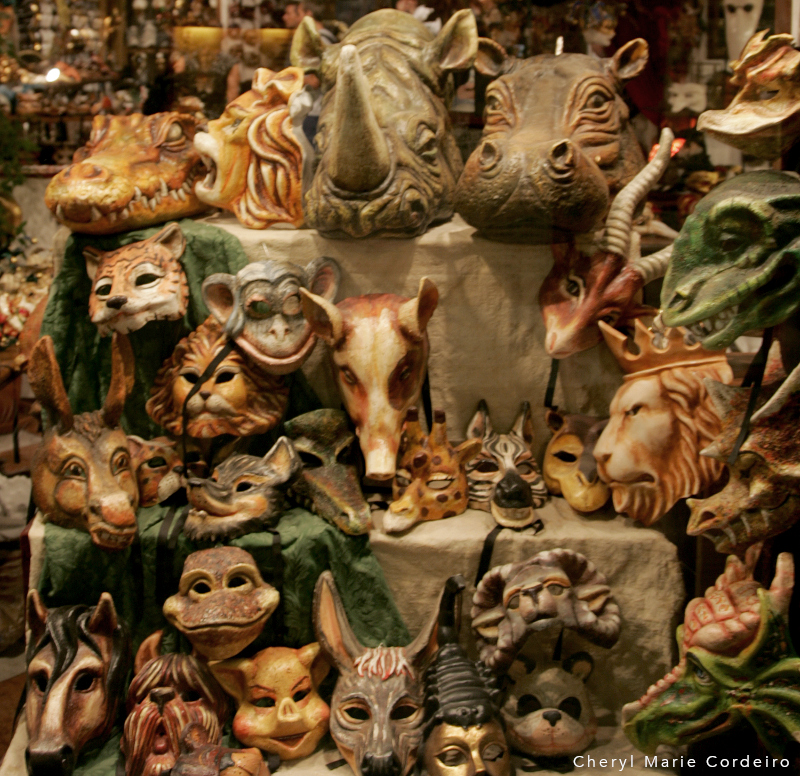 Animal masks, some of which come quite elaborately made. 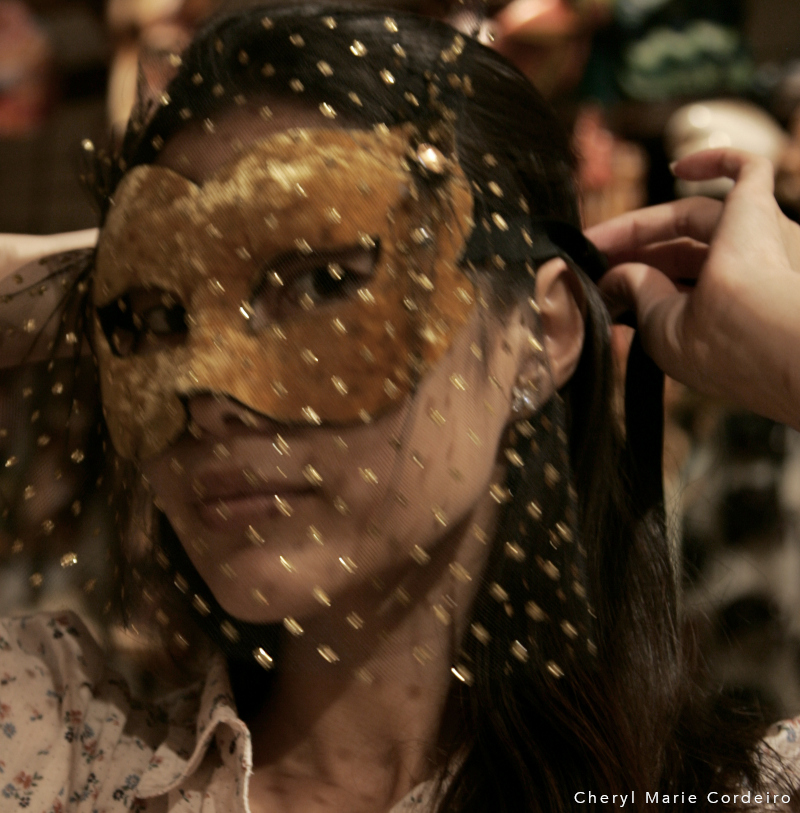 A Colombina mask in gold velvet with a black and gold veil. 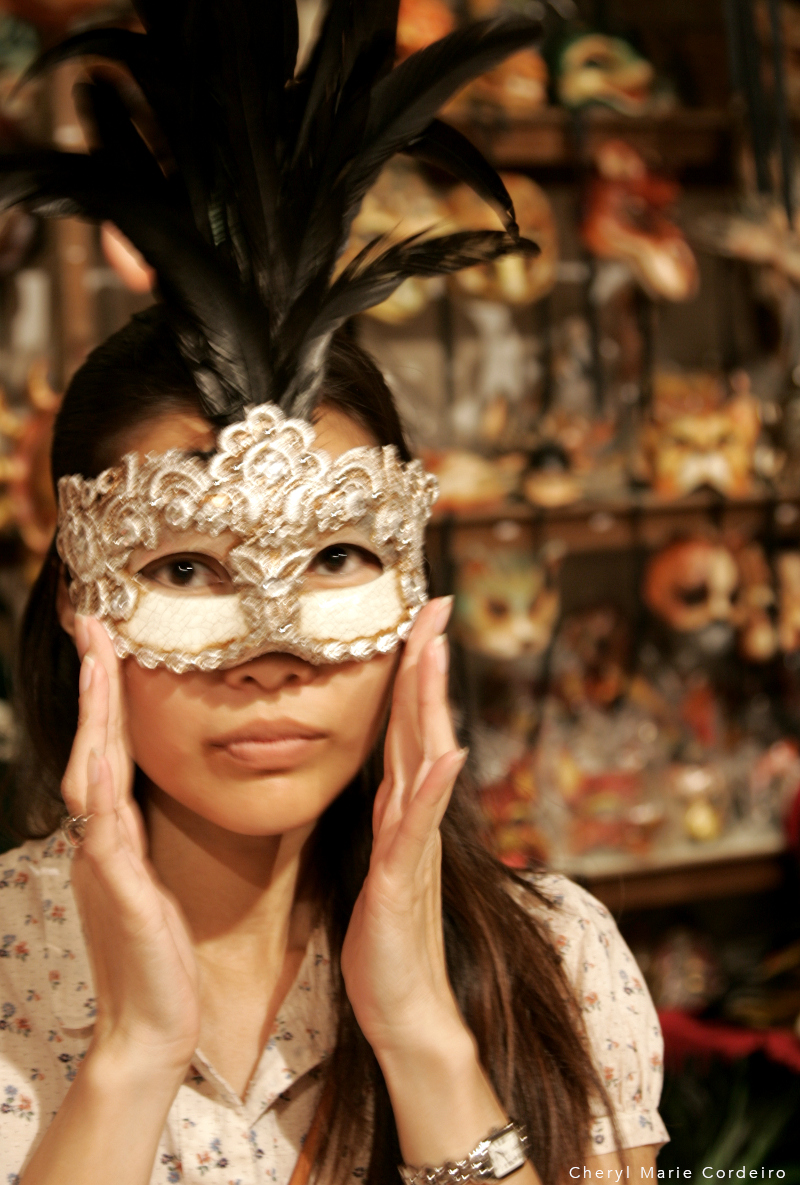 Ivana’s workshop for making masks stands to the left center of her Il Canovaccio store. Visitors are most welcome to peruse her works in progress. 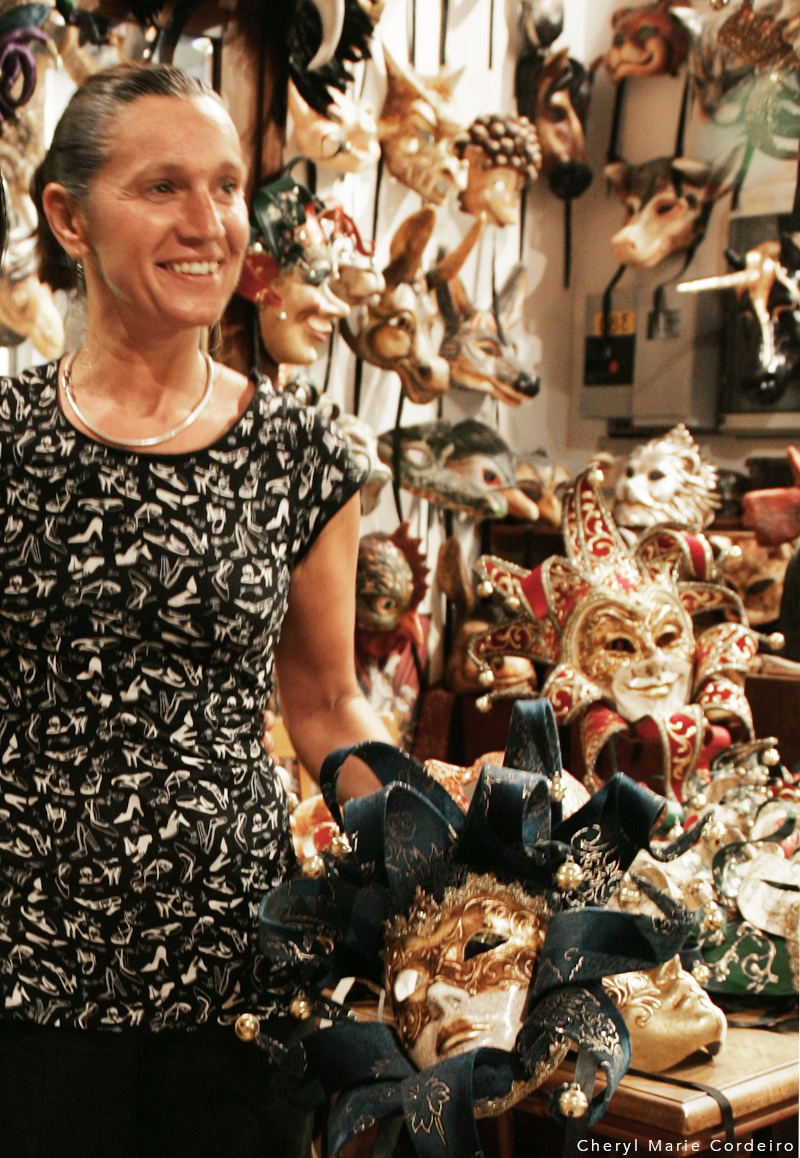 Ivana, holding a joker mask, is artist Mascereri to many of the masquerade masks in the store, Il Canovaccio. She holds workshops for individuals and groups on papier maché mask making and was friendly and enthusiastic about her work, explaining her inspirations. 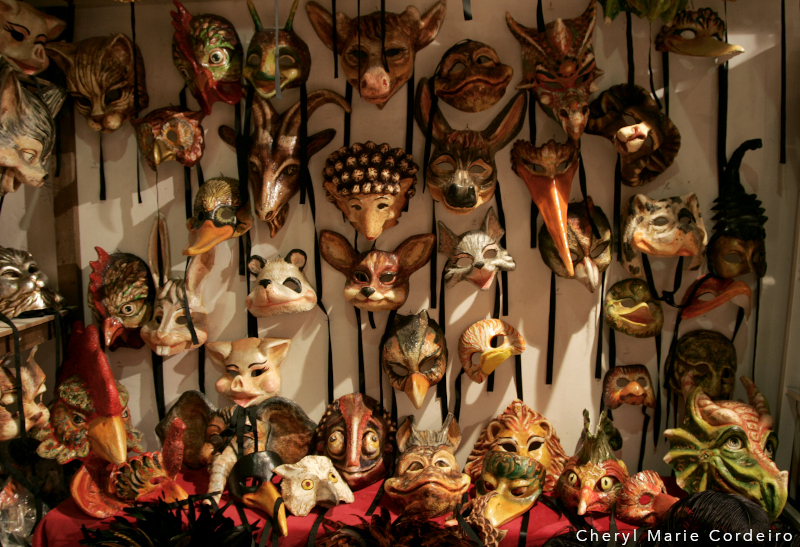 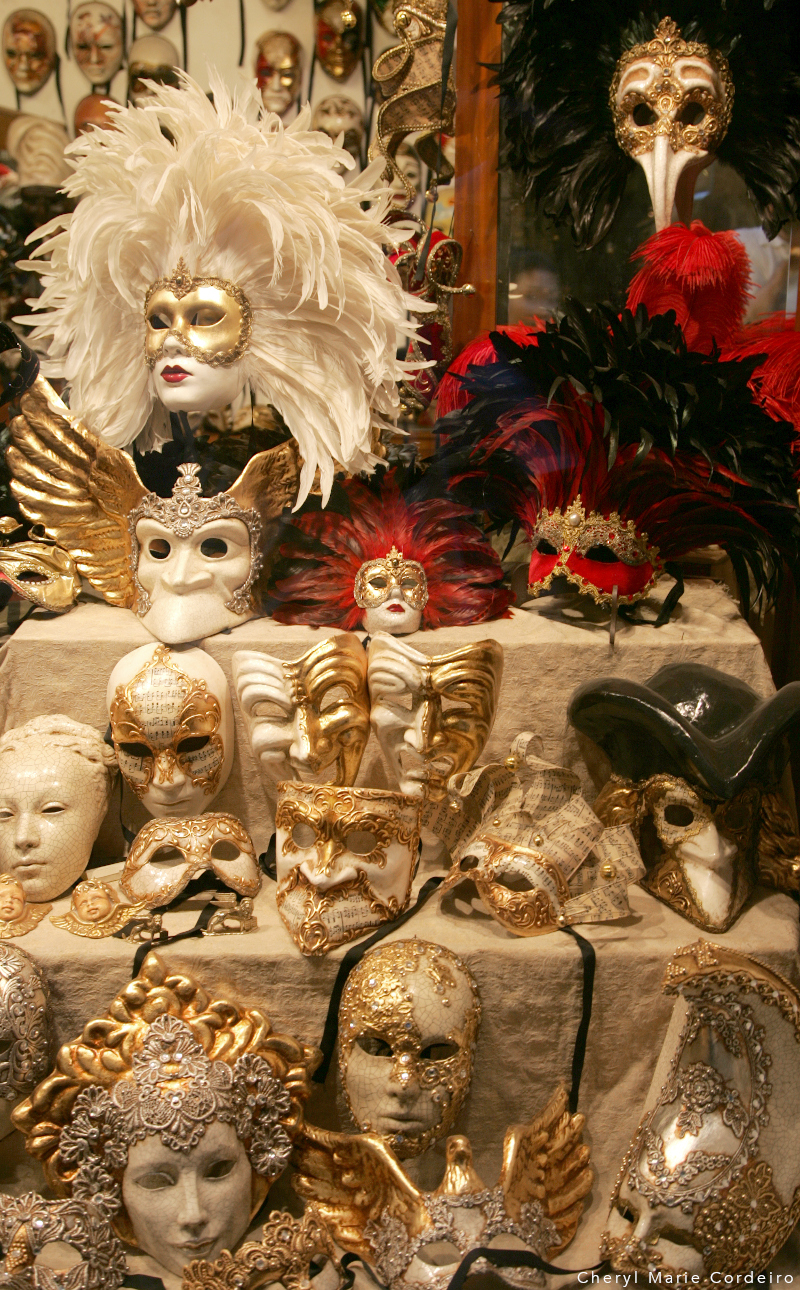 The window display at Il Canovaccio is only a partial display of the fantastic array of masks that beckons to the chimerical realities that await, when you step inside the store. 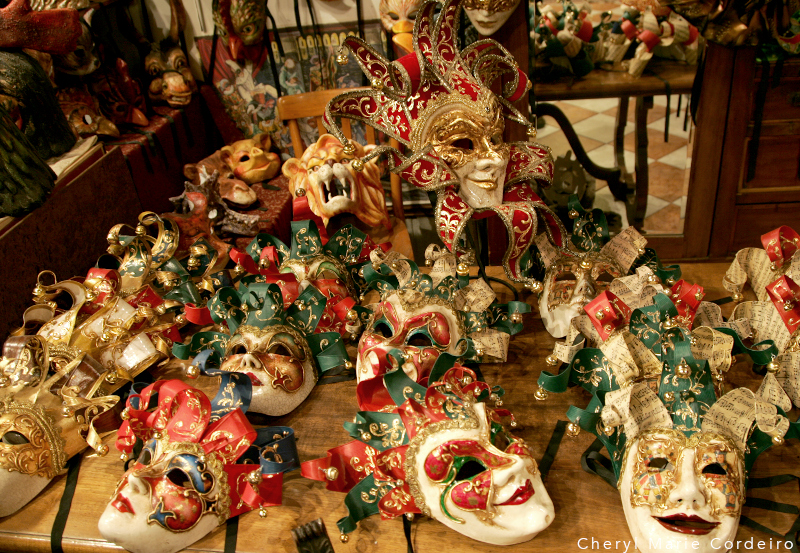 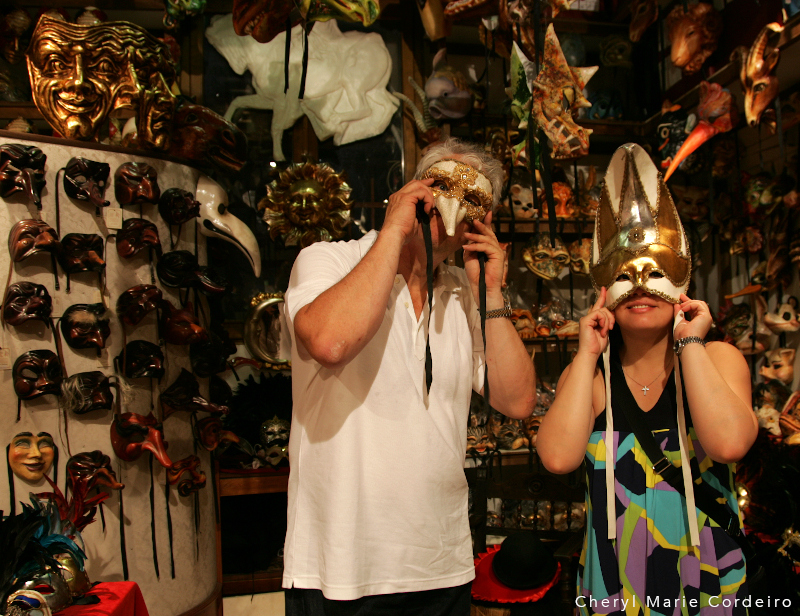