In June 2007 I spent a few days in London in a combined business and pleasure trip. It was almost a decade since I was there last, at that time with my parents. This time I could steer my steps better and of course went directly for the fashion districts and also to seek out any and all interesting exhibitions going on. And of course food.

The arrival to London from Landvetter, Gothenburg was early and after checking into the hotel, we (JE and I) explored the London Chinatown, near Leicester Square. 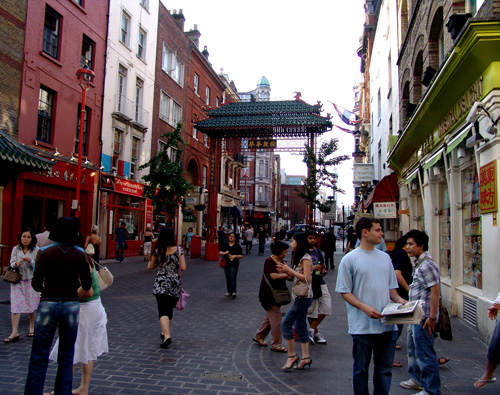 We came across a bakery that I had to go in because it reminded me so much of the neighborhood bakeries back in Singapore. 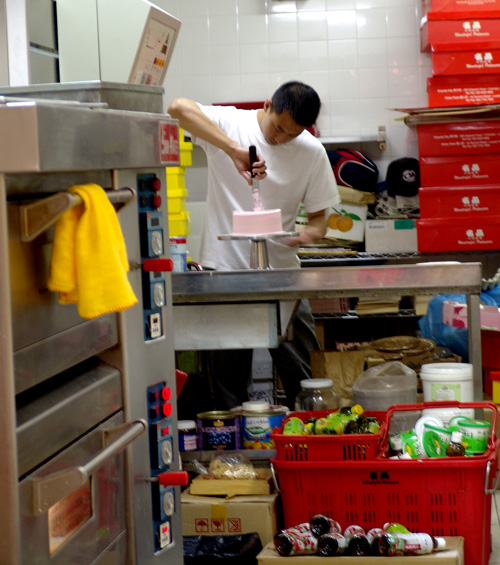 Here, a diligent and crafty baker, decorating a cake. 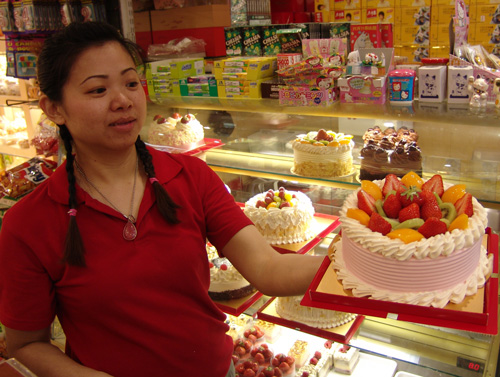 We waited around to see what and how he was decorating the thing, and voila! The end result…

I couldn’t believe my eyes when just around the corner of that bakery, was a Ben & Jerry’s ice-cream outlet at Leicester Square! B&Js ice-cream is so difficult to come by in Sweden and the flavours so limited that I was entirely thrilled to find this outlet! 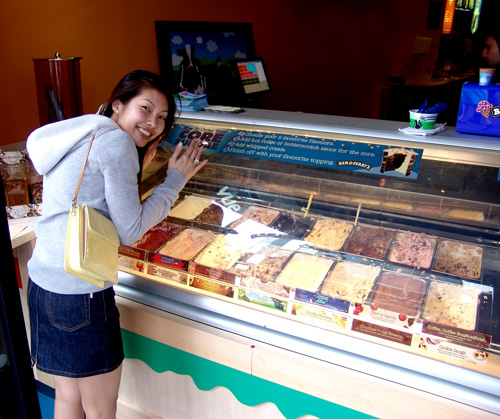 One of my favourite brands of ice-cream is Ben & Jerry’s or B&Js ice cream. 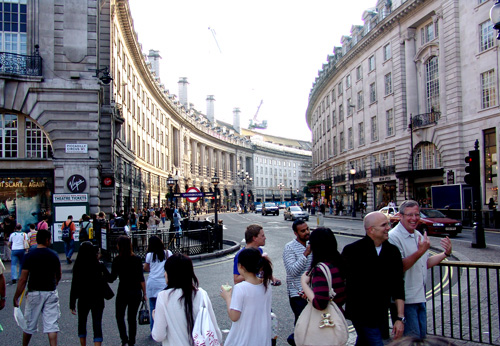 To me Piccadilly Circus is the center of London. That is where everything starts. One of the larger streets leading north towards Oxford Street is Regent Street. According to JE who is an arts historian, the reason that street was built in a soft curve was to show off the building’s facade, its columns lending the impression of power and importance. Buildings in a straight line as along most avenues don’t allow people walking the streets to really notice the facades. So a soft curve would give the impression of importance to the building and of course up the value of the property. Also according to JE, the idea was probably borrowed from Lorenzo Berninis colonnades (1657) outside of St. Peter’s church in Rome that are stunningly impressive if you are standing there. Below, a picture of an aerial view of St. Peter’s church. 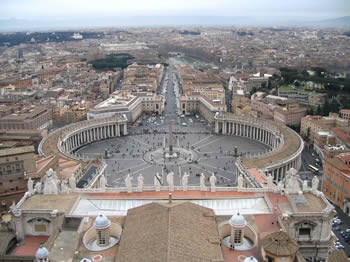 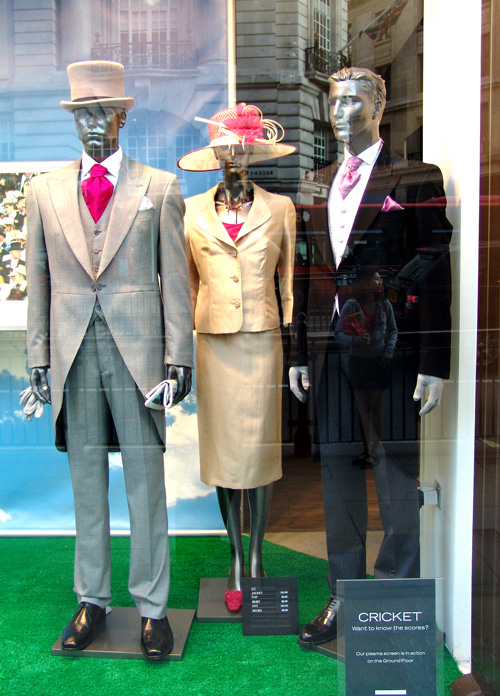 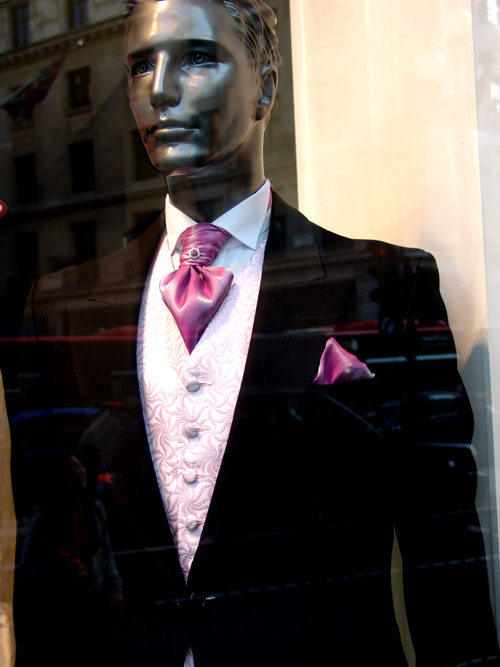 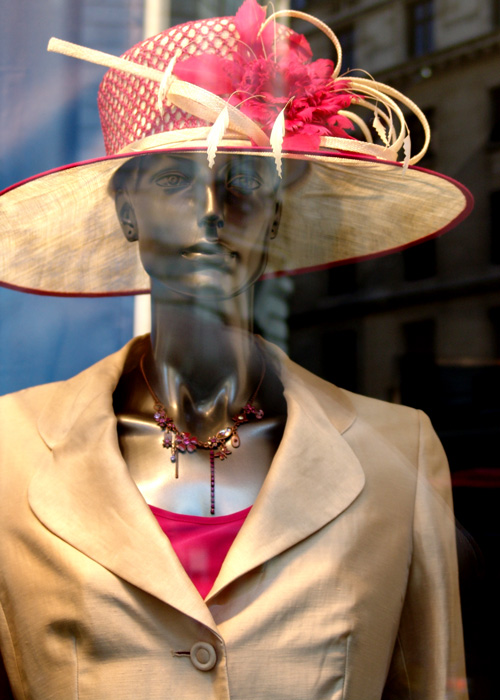 Cerise flower detail on a summer hat with matching camisole or blouse under the jacket.

But clothes were not the only items that caught our attention. They had, chocolate! 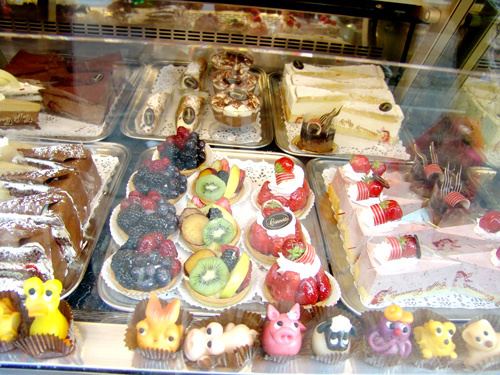 The marzipan animals lining the front of the window looked as delicious as they were friendly!

This day was spent exploring the Victoria and Albert (V&A) Museum, where we found out we just MISSED Kylie Minogue’s exhibition by only A DAY and Harrods.

We were not too disappointed though at the V&A Museum, as we found more fashion on display with clothes spanning the 17th century to 20th century.

Remember the corset episode in the first Pirates of the Caribbean movie? This would be the real thing from that time. 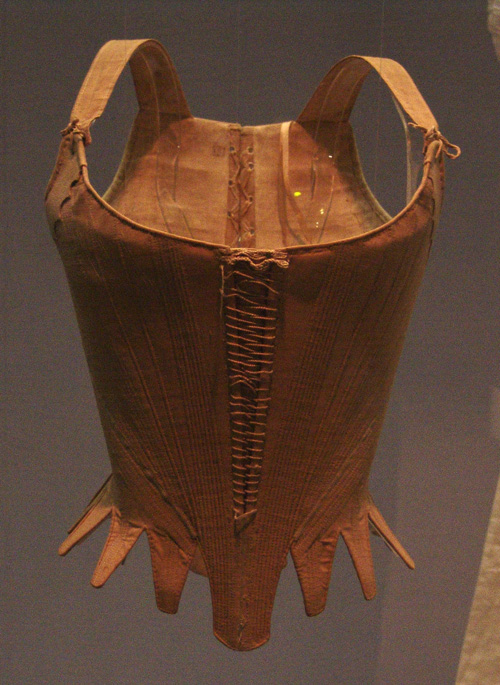 Gowns from the 17th and 18th century. What stunned me was how tiny the women were back then. Their shoulders and waists would be much too small for even myself to fit into their gowns back then. 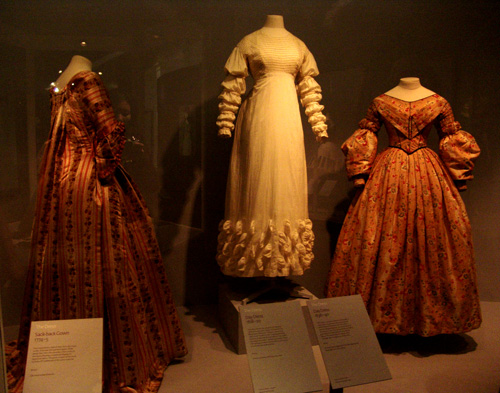 A dress one could still wear to a cocktail event or prom today. 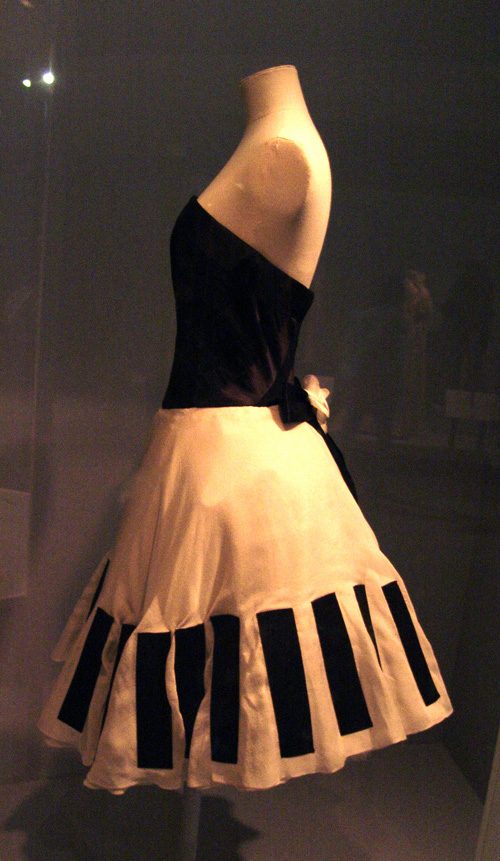 I myself cannot date the gold lame dress in the background and would’ve thought it was 21st century dressing, off the runways 2 seasons ago. A dress in paper money. 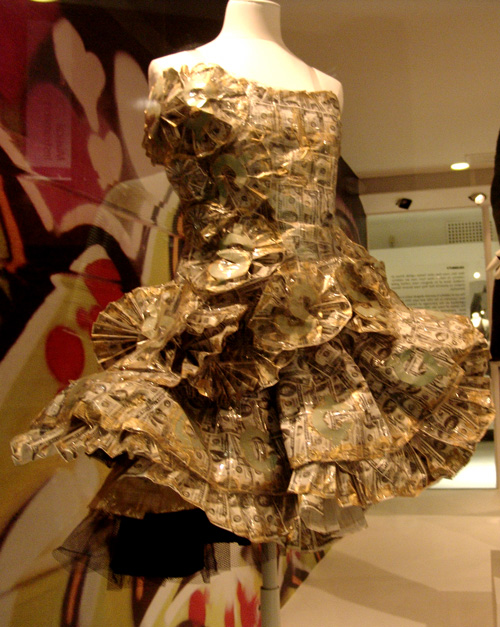 A dress in… pasta. Designed by Christian Joy for this exhibition (2007), with the intention that Orzolek should wear it for a future performance. Christiane Joy Hultquist, now Christian Joy, began making clothes in 2000. Soon after, Joy was crafting stage clothes for Karen Orzolek, lead singer for the popular New York indie-rock band, the Yeah Yeah Yeahs. Joy’s wardrobe for Orzolek is part of the band’s appeal – fans frequently copy Orzolek’s look. The clothes, more costume than fashion, are often crafted by glue gun instead of needle and thread. However unpolished, they complement Orzolek’s extroverted on-stage persona and feature slashing, painting and padding. Though Joy sells a ready-to-wear label on-line, Orzolek is Joy’s signature client. Several of her dresses were up for display.

Calvin Klein. Famous for its sexy advertising and their use of underage models. Part of the V&A Museum fashion exhibition. Which strangely reminded me of this Greek statue at a third museum we visited in London – the British Museum exhibition, near the Elgin Marbles.

This last picture from the V&A fashion scene is one of my favourites – a linen jacket with frill detail. 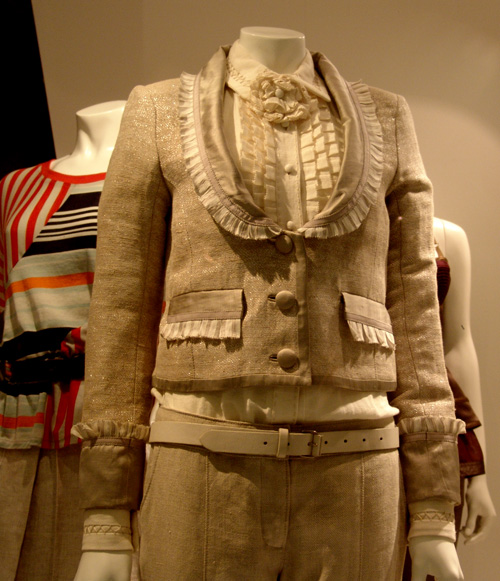 Most everything at the V&A Museum was interesting, even the guest seats modeled after the “Mae West Lips” sofa by the surrealist artist Salvador Dali (1937) were kiss-ass interesting! But unfortunately kiss-ass hard and nothing what you might have been lead to believe considering the original. It was made of solid plastic that gave no comfort to the sitter’s behind what so ever. 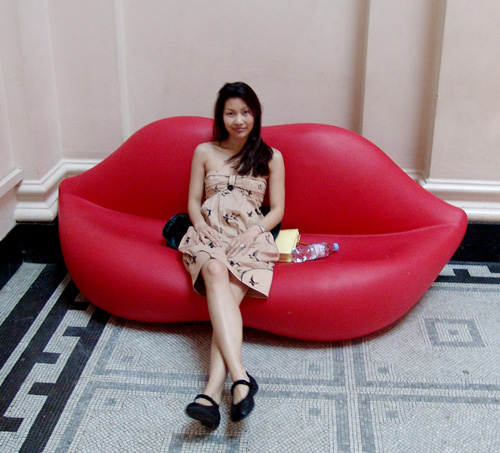 The Calvin Klein underwear at the V&A and the marble carved privates at the British Museum left us in no doubt that we should of course visit the real Crown Jewels stored in the Tower of London. Such a magnificent display of limitless wealth could not be ignored. Unfortunately no cameras were allowed so you will need to imagine what diamonds the size of duck eggs look like up-close if you haven’t been here yourself. We personally went ulu (“up river”) and went up and down the exhibit three times over until the guards starting to give us funny looks. 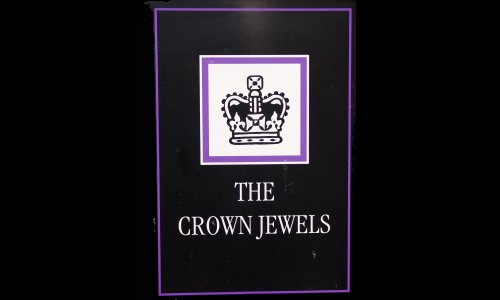 And no visit to London would be complete without a visit to Harrods with their absolutely stunning food department in the basement.

They had an array of food ranging from Chinese, Indian, Mediterranean and Japanese etc. These looked gorgeous but we were already stuffed from eating at a Chinese restaurant we found around the corner outside the V&A Museum. And little packages of seafood delight! Not long after this trip we went back to London again, visiting all kinds of markets and second hand shops. I will be adding some pictures from that visit here in a short while.

White cardigan from Pringle of Scotland