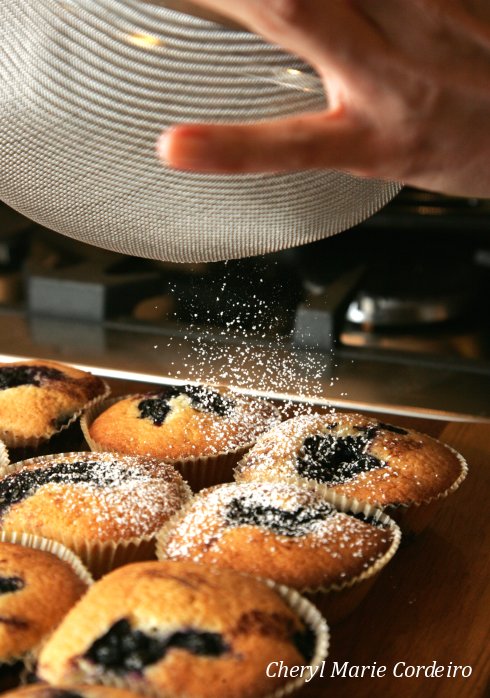 Sunday afternoon, I’m leafing through at least two cookbooks and several leaflets of muffin recipes that my mother had handed over to me over the years, in search of consistencies between the recipes. I could of course try the Internet too, but that would most likely compound the problem of coming up with a trustworthy recipe for something as simple as a muffin, since depending on culture and beliefs about information sharing, authentic recipes over the Internet are rare finds. 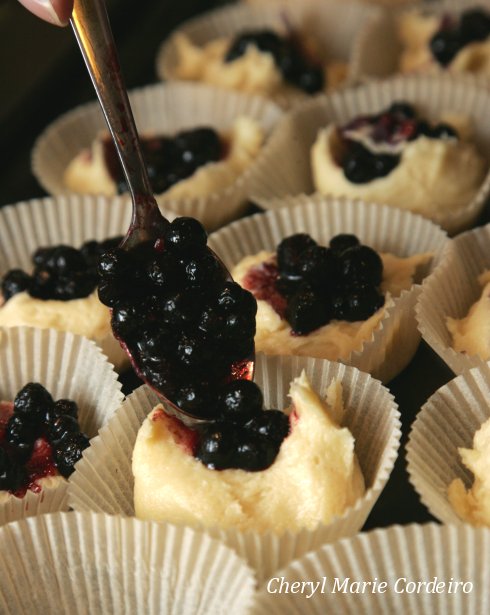 I used 300 grams of deep frozen blue berries softly stirred with white sugar. Whole fresh berries might have been better.

In this day of social media where technology lends overwhelming support to the creation and sustenance of the knowledge economy, it leads to the fact that a lot of people are managing their expert know-how to their cooking by just not wanting to tell how they do it, thus leading to any number of nonsense recipes on the Internet, being just plain wrong.

It’s frustrating, time consuming and infuriating to not be able to get all details to the cooking or baking, from the ingredients and their quantities, to more precise information such as when eggs are best used, to if they should be cold or room temperature before whisking them them together with some butter to get the right consistency. 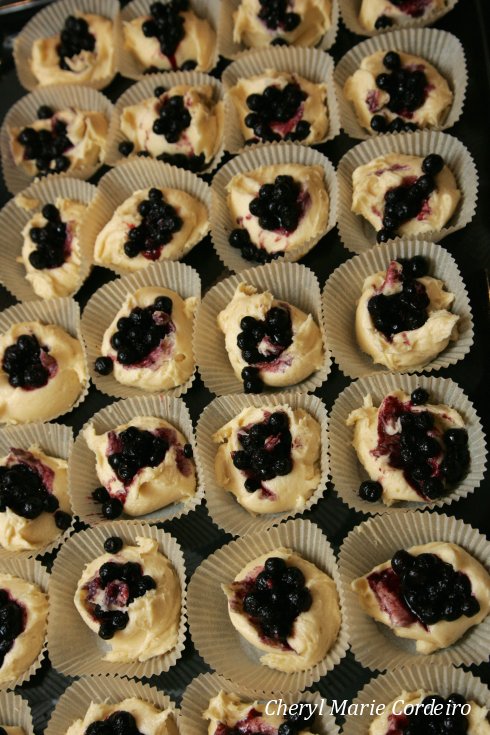 A tray full of cups. Filled about half and topped off with a spoon of blueberries.

After settling for one recipe, that comes from a small favourite Swedish cookbook of mine entitled Sju sorters kakor that was first published in Sweden in 1945, I marveled at the fact that the speed of technology development has outpaced, if one could make a comparison at all, the developments in cultural beliefs on knowledge sharing. The Internet and social media for example, allow for much greater information sharing and access than what some people are comfortable with. In today’s social media culture, we are also perhaps coerced by social pressure to share our private lives, ending up feeling obliged to ‘share’ information about ourselves*. The dilemma arises then, of what and how much to share and what’s more, how much authentic information should we share?

The number of times I have asked someone for a recipe and have subsequently been declined is innumerable, everything from a hawker’s fare of prawn noodle soup to the American pumpkin pie. While this is hardly surprising, given the (hardly exclusive) Asian belief that if you shared your exact recipe, that you would lose your Midas Touch in cooking that particular dish, I can’t help but think that this behavior stems from the general conflation of the concepts of information, knowledge and tacit knowledge, coupled with a sense of fear of losing one’s identity or ability in being a good cook by sharing recipes.

In fact, what makes a good cook, ironically, is not having the ability to follow recipes but to wing it. Winging it requires tacit knowledge – a type of knowledge that going by Polanyi’s (1966) and Nonaka’s and Takeuchi’s (1995) definition – is the most difficult of all types of knowledge to access and cannot for example, even be willfully or explicitly conveyed in the form of information. In my view, cooking well belongs to the realm of tacit knowledge activities. It’s like knowing how to ride a bike or understanding the nuances of a particular language in use that is culture specific – you can only know it by doing, by experiencing, over a period of time. And that’s where the difficulty arises for those who ask for recipes, where original / unique recipes can even be patented or considered an intellectual property (IP) with laws to protect its integrity. Still, having a patented recipe and understanding how to bring that recipe to its full potential and make use of it are two different things. You can give a person the most brilliant recipe to follow but the resulting product still varies, with most outright failures on the first try. Why? Tacit knowledge. 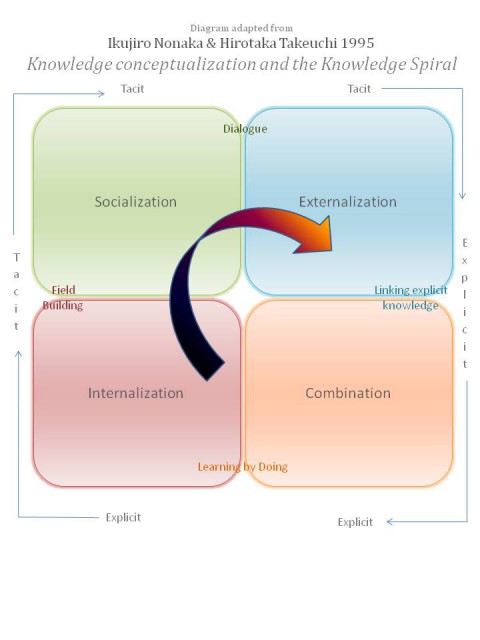 Knowledge conceptualization and the Knowledge Spiral.
An adaptation from Ikujiro Nonaka & Hirotaka Takeuchi 1995.

Tacit knowledge can be broadly defined as that which is inaccessible or, very difficult to make explicit and unlike how the majority of IP types might be defined. In its broadest sense, IP refers to intangible assets and creations of the mind, the use of which are protected by law. The more common types of IP include copyrights, trademarks, patents, industrial design and trade secrets etc. that can be found from the fields of medicine, technology to the literature, music and art.

All this knowledge belongs to IP that you can choose to keep to yourself or give away. It’s understandable if a cookie recipe is kept secret, if the family earns their living by making and selling them. But for most, a common heritage can actually be promoted and kept alive by actually sharing recipes freely, with anyone who cares to listen. Of course, the fun is in the practice, which is also the key to perfection, as tacit knowledge gets in the way of real duplication of effort, so that sharing information will not automatically lead to achieving the desired end result.

So, with this latter option in mind of promoting a common heritage, I will now share how anyone can whip together a bunch of blueberry muffins I like a lot myself for Sunday coffee, with no other reward in mind that you might want to do just the same with something else you know, some other day, on your own blog of Facebook page, just for the fun of it. 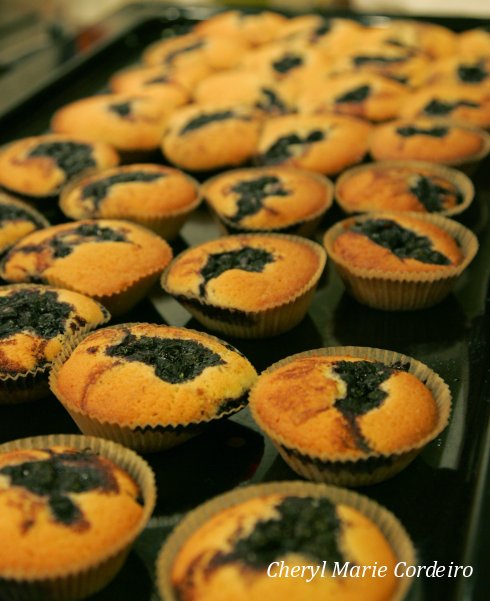 Soft, light and wonderfully spongy, some of the blueberry’s gone astray, but very tasty nonetheless.

Now, here is exactly how to make these muffins

In one bowl, whisk 300 grams of not runny but soft – room temperature – butter with 300 ml of sugar, until fluffy and light yellow in colour.

Stir in 4 eggs one by one until thoroughly mixed.

Combine these two bowls by stirring until thoroughly mixed but don’t overdo the stirring. Just mix it properly.

The batter should be pretty stiff and not runny at all.

Place paper cups on a baking tin. Fill about half of each cup with one dollop of batter.

Into each dollop, add one spoon of deep frozen blueberries stirred with some sugar.

Chef’s tip: Depending on the consistency of the batter, the paper cups shouldn’t be filled with more than half their content with batter or they will spill over. You might need to use two spoons to do this. The berry filling needs to be sunk into the middle of the batter, or it will dribble out and mess up the cups during baking.

* In the New York Times recently, an article by Michiko Kakutani, Friends Without a Personal Touch discusses Sherry Turkle’s book, Alone Together on the ways in which social media is changing the manner in which people interact and relate to each other and its resulting psychological side effects.

Intellectual property in a globalized knowledge economy and how that today can be effectively measured in tangible terms, effectively contributing to a country’s economic development and its wealth, are themes and topics to this year’s CIP Forum 2011 that is upcoming end of May to early June, 2011 in Gothenburg, Sweden.

Those working in IP and its related fields could also be interested in The Business of Intellectual Property program that will run in September and October 2011, with CIP-PS and The GU School of Executive Education AB, University of Gothenburg, Sweden.

One thought on “Blueberry Muffins Knowledge Conceptualization and the Knowledge Spiral”