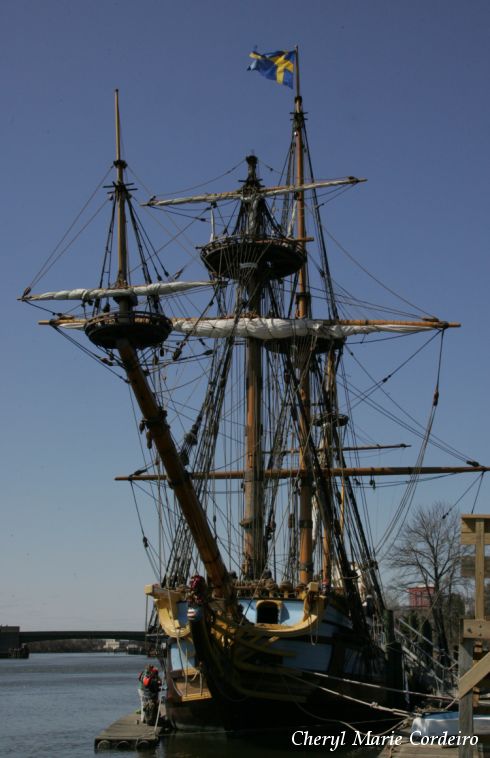 The two first Swedish ships – we know of – to arrive in America, were the Kalmar Nyckel and Fågel Grip. In Wilmington, Delaware, USA, docks a sailing replica of the Kalmar Nyckel, where the first settlers landed.
Photo: JE Nilsson and C M Cordeiro-Nilsson © 2011 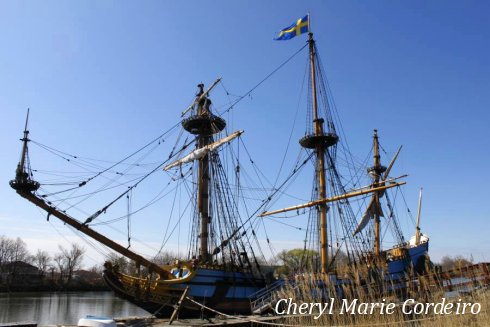 The Kalmar Nyckel replica is a smaller cousin in design to the Swedish East Indiaman Gotheborg III replica.

We visited the Kalmar Nyckel at what seemed to be at its most quiet and resting period. Beneath the apparent quietness however, were all kinds of repairs and upkeep being done inside and out, with parts of the rigging being indoors undergoing new lacquer treatments. Over the whole area lingered the sweet fragrance of linseed oil and tar. 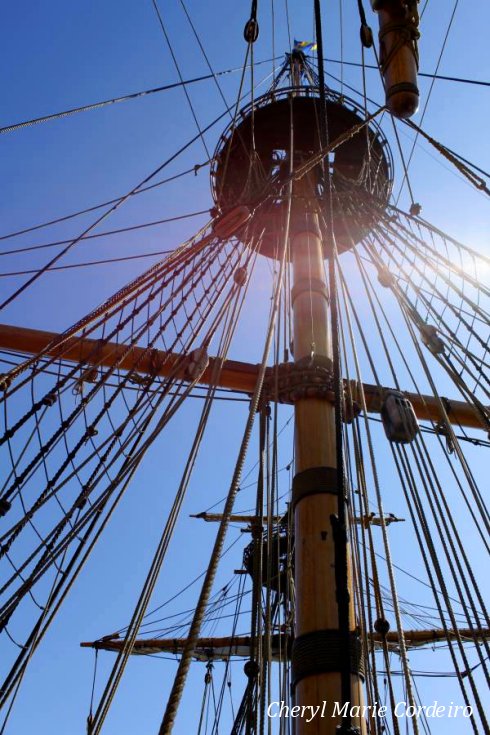 Why then, was there an apparent 17th century wooden ship, flying the Swedish Marine flag, docked on the shores of the Christina River? The ship sits near Gloria Dei (Old Swedes’ Church) and Fort Christina Park just south of the city of Philadelphia, USA, the very city founded in 1682 that was the capital of the US between 1790 to 1800, and where the declaration of independence was signed by the founding fathers of the USA the 4 juli 1776. 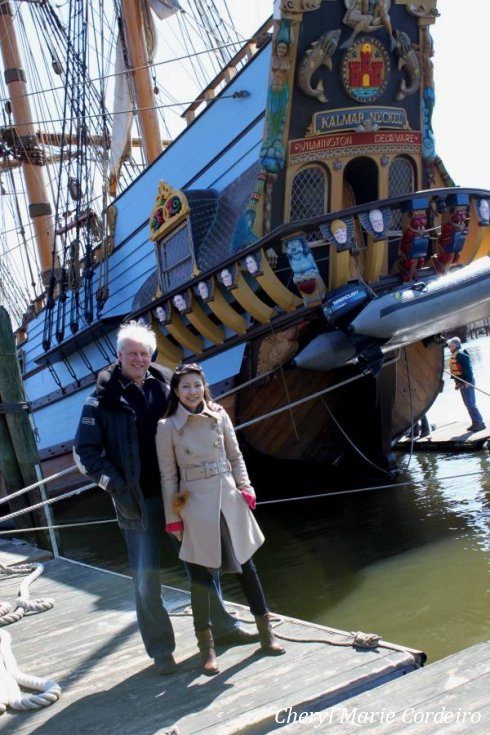 At the aft of the Kalmar Nyckel in Wilmington, Delaware, USA.

It all began in 1637 in Sweden when the brave crew of two small ships, the Kalmar Nyckel and the Fågel Grip, set sail and left the barely founded City of Gothenburg with a business adventure and a new life on an entirely new continent in mind. They left fully aware of that they might never return, and with very little idea about what they would meet in the foreign country. Their purpose was to go west and to start a trading outpost and a Swedish colony in North America. In 1638 they sighted what was to become Wilmington, in Delaware. They sailed as far up the river they dared, cast anchor, and after having felt solid ground under their feet again, started to set up the colony of ‘New Sweden’. This was only a few years after that the Mayflower had arrived with the first “pilgrims”, in 1620 and the knowledge about the new continent was all but non-existent. Map of the landing site. After purchasing land from the Lenni-Lenape Indians, in 1638 the Swedes set up a thriving community based on fur-trading and farming to settle along the Christina River near what is modern-day Wilmington. 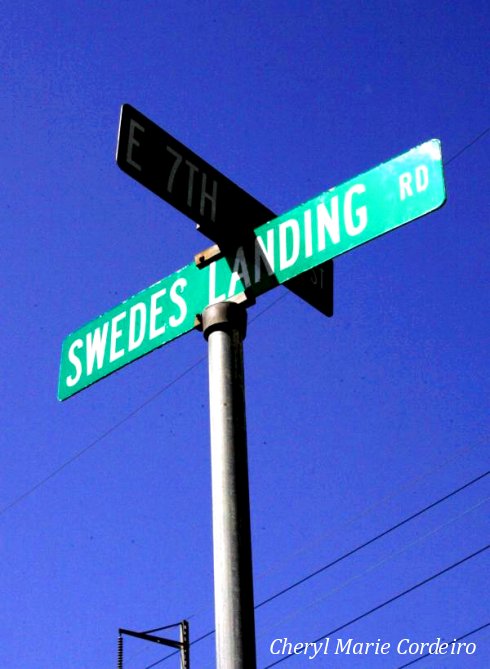 A stunningly unexpected road sign in Wilmington, Delaware, USA, bearing witness that the first settlers are by far not forgotten.

It was gorgeous weather that day from Pennsylvania to Wilmington in Delaware. And as if the Kalmar Nyckel was expecting our visit and like laying out a dining table with pristine and crisp white linen cloth, there was not a cloud in the sky, with the sun as warm and welcoming as it could be for a chilly spring. The Old Swedes Church was erected in 1698-1699 and is the oldest church in the United States still standing as originally built and still in use as a house of worship.

Without a GPS in hand, the finding of the place went surprisingly smooth as well. New Sweden or Nya Sverige in Wilmington, Delaware is just about an hour’s drive from Pennsylvania, with the most prominent features when approaching the place being all sorts of signs leading you to the “Swedes Landing” and the old Swedes Church. The Kalmar Nyckel, dressed in the Swedish colours of blue and yellow, docks just about 800 meters from the old Swedes Church, walking in the direction of the Delaware River. The Sail Loft, view from the river looking in. In the foreground, shipyard slipways that might date back to WWII, where landing crafts for D-day were built on this very place.

Entering the grounds, you’ll see immediately, the Sail Loft Museum that opened at the shipyard in 2007. The red of the Sail Loft exterior is a typical shade of “Falu” red used on the exterior of Swedish houses that you still today might find all over the Swedish countryside. At the time of this ship however, most farm houses in Sweden were built of solid and heavy unpainted logs, a manner of building houses that first came to the US with this ship and its original settlers. Toolbox, the Ship’s Cat, came out to say Hello! and pretty much accompanied us most everywhere we went on board the ship and into the house. In the good company of Wally, or more formally Woldemar Schock, one of the old-timers with the project, we were given the grand tour with all kinds of stories on the side, such as the occasion when one jolly broadside from the canons on board when berthed on the Potomac River that runs through Washington DC, gave the White House and its staff the shock of their lives and almost had the US Air Force set on full alert. Help! The … Pirates of the Caribbean are … boarding us!? A view inside the aft cabin, with dark wooden panels and intricate carvings. Stairs leading up to the poop deck from the quarterdeck abaft the mainmast. Another feature that the Kalmar Nyckel shares with the Swedish East Indiaman Gotheborg III – cast iron canons – though the Gotheborg III is more heavily armoured being a larger ship. Starboard side of the ship, looking forward towards the forecastle, as seen from the poop deck, which we agreed was the very nicest spot to be on, on board, at least when the weather was nice. During a storm, I wouldn’t be too sure.

Wally was full of enthusiasm when speaking of both the technical aspects of upkeep of the ship and of the current programs run by the Kalmar Nyckel Foundation such as having an open bakery on certain days so that people would come visit the ship and buy a muffin or two in contribution to the ship’s upkeep funds. JE and Wally, at the aft of the Kalmar Nyckel.

Run by a non-profit organization, the Kalmar Nyckel serves as a goodwill ambassador, acting as a platform for reaching out from the State of Delaware for social and economic development on several levels. It also serves a popular point of interest for both sea-faring education and recreational activities.

It was not long into our visit to the ship that we met with another group of enthusiasts, ready to greet the Kalmar Nyckel and have some coffee onboard its gorgeous deck, discussing fervently, the upcoming activities and events at the foundation.

We left the grounds with the distinct smell of tar on our hands after touching the masts in the sail loft, undergoing its seasonal maintenance and with a general feeling of warmth, of spending an afternoon with old friends in The New World.

One thought on “A small part of Sweden in Wilmington, USA”

The Empire State Building and Macy’s