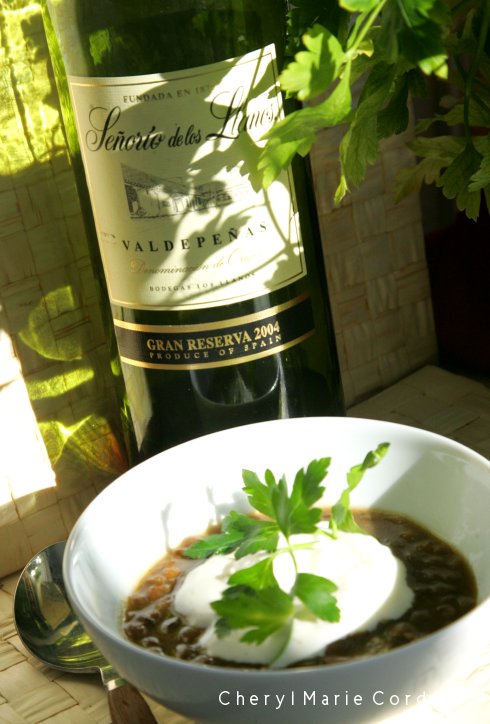 My favorite souvenir to bring back from places I have visited is actually the food.

Not only all the local specialties I can fit into my luggage and hope will survive the trip back, but the smell, the flavours and that particular piece of memory and history they contain, that could so easily be revived over and over again at the stove back home.

This weekend I was thinking about Barcelona, that will always have a special place in my heart.

If you walk down La Rambla from the Placa de Catalunya and resist the temptation to turn left into the Barri Gótic just for once, to get lost in the myriads of picturesque back alleys and squares that endlessly lead you round and around in the search for the perfect xocolata you had yesterday, just somewhere around here … and instead carry on, down past the familiar facade of La Boqueria wet market, and turn right, about there, you will soon find yourself inside the bohemian turned pretty posh quarters of El Raval.

There, immediately before you hit the open area of Rambla del Raval, you will find Casa Leopoldo.

Casa Leopoldo is not one of those gastronomically very inventive places you so easily can find in Barcelona, but rather the opposite I would say. It’s a rustic and genuine Barcelonean eatery. It was opened in 1929 by Señor Leopold Gin. The story goes that on the opening day, they only had two customers. One at lunch and one in the evening. Eventually it turned out to have been only one customer, since it was the same man. However, they decided this was a good sign since already the first day they had got a repeat customer.

If you are looking for true Spanish fare, this would be one of the options. Excellent ingredients sourced daily at the nearby La Boqueria.

If your feet still haven’t given up on you, you might want to continue a bit further until you find Mesón David. “A slice of the old Spain” as the guide book has it. We could not stop marveling at the size of the portions that were handed out to seasoned locals obviously accustomed to the solid fare, none raised an eyebrow to dishes in sizes similar to that found at a Swedish Christmas table to each guest, indeed worthy a nation of conquistadors and bull fighters. 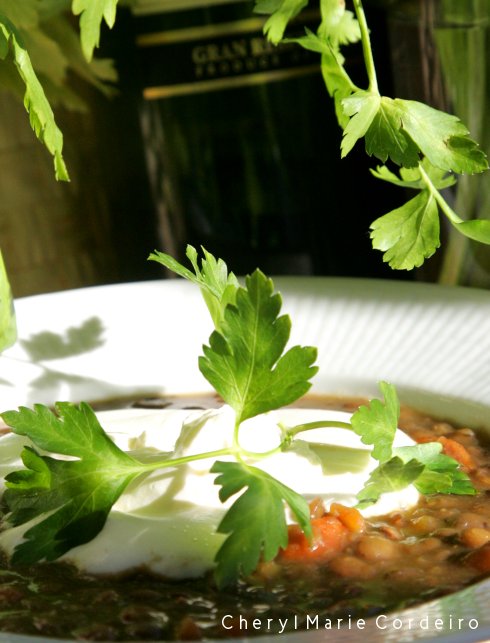 From this area I picked the inspiration to this green, very Spanish, lentil soup. Lentils date back all the way to the Roman Empire some 2000 years  ago, when they were a staple in the Roman Army because they are easy to preserve and transport.

Tomato, garlic and olive oil are basic ingredients in Catalan cooking and gives together with onions the typical meat sauce sofregit. Spices are surprisingly absent in Catalan coocking as a whole, but parsley and black pepper felt like a reasonable safe bet and as a last touch, a dash of ground cumin seeds.

A few sliced up spicy Spanish txorizo (Chorizo) sausages made from coarsely chopped pork and pork fat, seasoned with smoked pimentón added some muscles to this soup and to mellow it down a bit, I topped it up with a dash of whipped cream dusted with some black pepper.

1 onion, 2 carrots and 3 cloves of garlic, chopped up in small lentil sized quarters

Stir fry in 2 tbs olive oil and some butter, add water and lentil as needed.

Boil in 1 liter of mixed chicken and meat stock for 1 hour. Add more water as needed. Add salt if you like but be careful, depending on the meat stock you use. This soup will only become better if you cook it longer. Serve with some Spanish red wine and white bread rubbed in garlic, tomato, olive oil and some salt.

Perfect as an entré or for lunch.