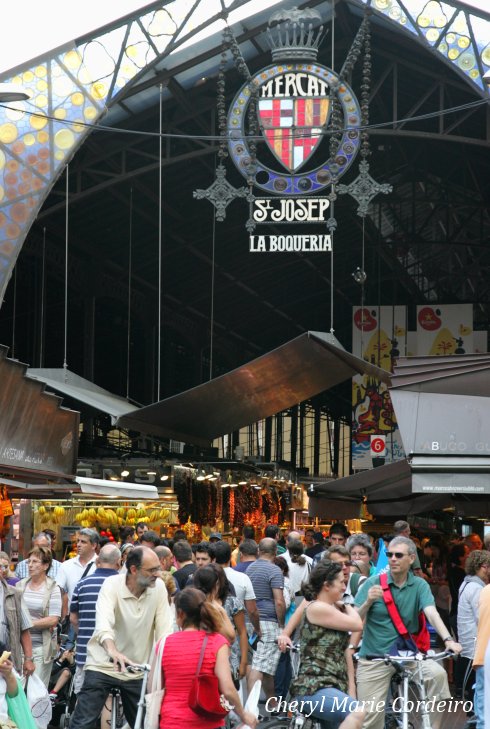 The entrance to La Boqueria is about midway along the famous Catalonian Boulevard La Rambla in Barcelona. The Boqueria wet market opens up at a side road called Mercat de Sant Josep. This market, that has a history from the early 13th century, is today frequented as much by locals as by tourists alike.
Photo: JE Nilsson and C M Cordeiro-Nilsson © 2011

A lot of things in Barcelona are labelled “touristy” and as a result, sneered at even by the locals just because they are popular with the tourists. But Mercat de Sant Josep de la Boqueria tells a different tale.

La Boqueria, as it has been known since the early 13th century when it was established here in the Old City district, began as a convenient network market located near the old city gate where traders from the nearby towns such as Les Corts and Sarrià (now only a 25 minute bus ride from La Boqueria itself) gathered to trade and sell their produce. The market remained here through the centuries, got a firmer structure in the early 19th century and in 1915, an iron roof with its inset stained, colored glass was added, giving the modernismo touch of the time to the place. 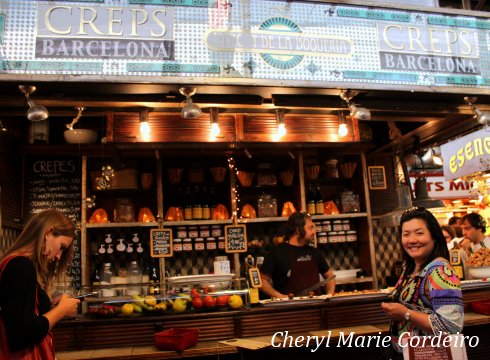 Creps Barcelona. This crêperie has several outlets, of which the one at Mercat Boqueria is a small but warm and friendly corner stall. 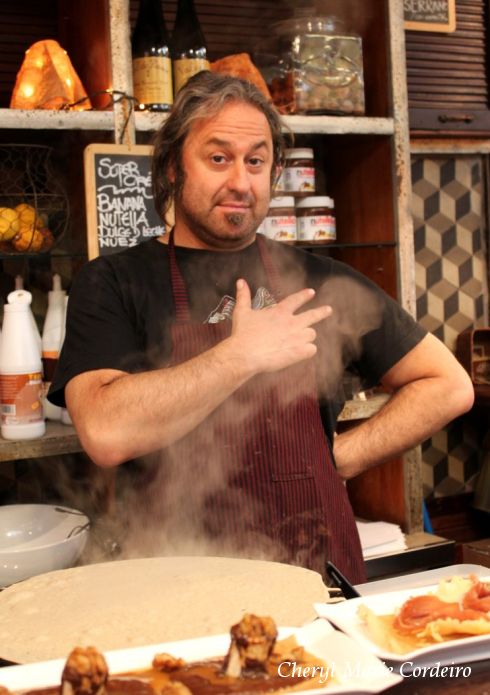 You’ll most likely be met at this outlet by the robust and genuine smile of Pablo Burcaizea, who cooks up some fantastic crepes in this tiny ‘kitchen’. 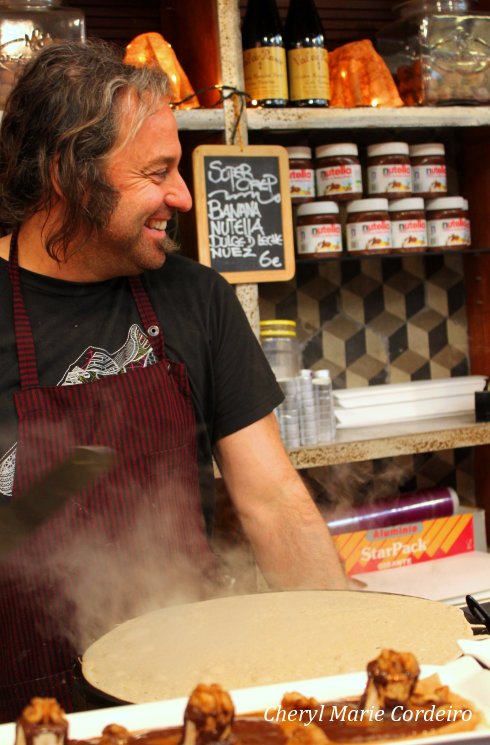 We marveled at how Pablo seemed to flip and fold crepes to artistic perfection without skipping a beat as he conversed with us and several other guests at his corner. We felt right at home, dining in his corner of the market! 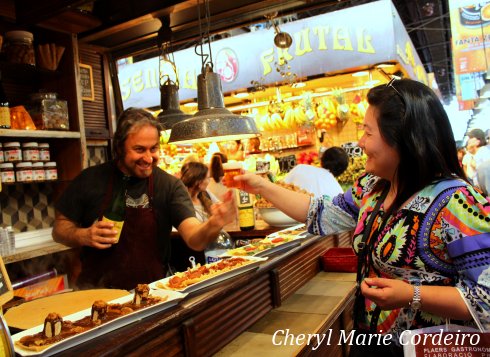 What better than a cup of sparkling white wine to wash down the prosciutto and oregano dusted crepe? 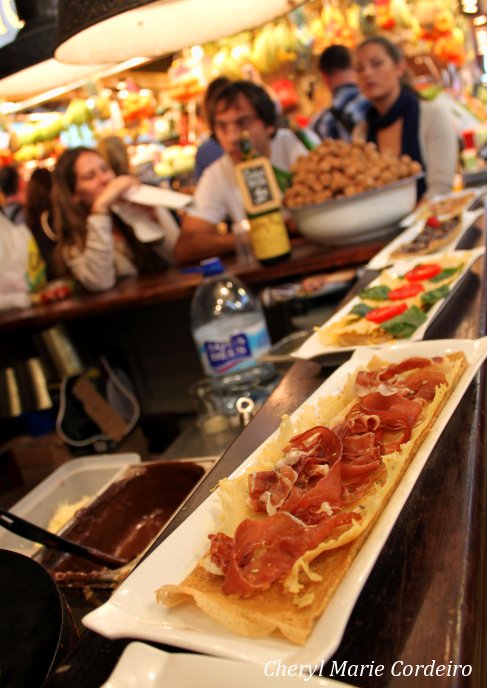 Both sweet and savoury crêpes are on the menu at this crêperie. 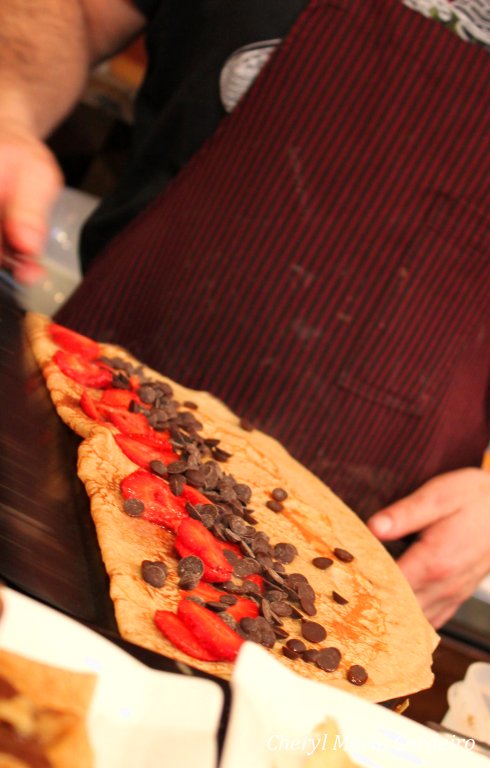 It was the wafting aroma of this combination of sliced strawberries and chocolate that drew us to Pablo’s crêperie.

In the past week that I’ve been here, I’ve found that Barcelona can be unforgiving on your feet with its numerous interesting places of visit, shops, open street stalls and wet markets along many of its main streets. This is not to say that its public transport system is lacking of any sort, because that is certainly not the case. Barcelona has, in my view, a kinder underground system than Paris, where in Paris, you could feel as if you’ve covered a grueling 800 m between trains at certain interchanges. Stretches of underground tunnels between trains of this sort is happily fairly absent in Barcelona, with the metro connections being speedy and excellent. The various bus lines also conveniently take you anywhere into the suburbs of the city between 15 to 20 minute waiting time intervals. Still, exploring this city that seduces you into forgetting time, can prove exhausting simply because there is so much of it to see best by way of walking, such as its various building architecture for example.

The city’s history is undisguisedly reflected in the architecture of the buildings. As you walk from one quarter to another in Barcelona, you’ll find building shapes and designs spanning from Late Roman years, with classical monuments such as Roman city walls and Medieval cathedrals, to structures that define Modernismo – the Spanish brand of Jugend – and beyond. 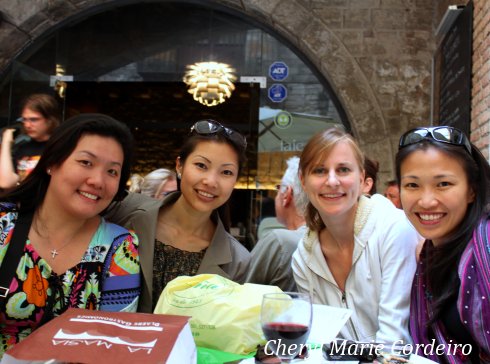 A picture from the day’s outing with friends. This was taken in a courtyard that had live classical music playing in the evening, opposite the Picasso Museum.

In the energetic buzz of this environment, I’ve found it critically important to make quick pit stops for food and drinks. Luckily in Barcelona it is easier to find a restaurant or a tapas bar than a soccer fan, the latter literally filling the city just about a week ago, all witnessing the city’s recent 3-1 victory over Manchester United. This year, Barcelona had secured a third Champions League title in six years. A week ago, the weekend celebrations with fireworks and car horns continued throughout the night. This weekend, the celebration goes on though in a slightly different tempo and vein that reflected the customary Catalonian weekend city nightlife that begins at just about 2 am in the morning.