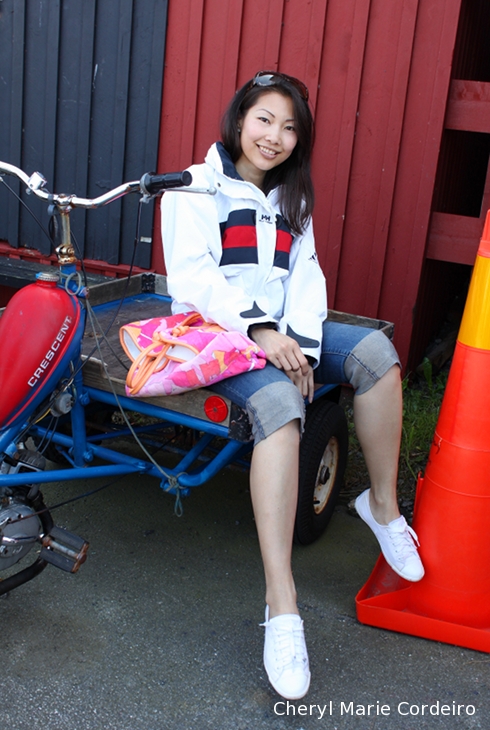 As is the tradition the first Saturday in August, it was festival day at the island of Donsö in the Swedish west coast archipelago just outside of Gothenburg.

The crowd filled up fast along the Market Street as soon as the festival began. Compared to the Donsö Harbour Festival of 2011, where an enormous Skandia engine from the 1950s caught everybody’s attention with its comforting low key chug of a ship’s heartbeat, there was no real crowd stopper around this year.

The narrow street between the small red storage huts for shipping goods huddling near the seafront soon filled up with stands carrying all kinds of items. Everything from Swedish homemade marmalades and candy to hand knitted woolen scarves that one would always need up here in the Nordic countries, to high style cruising outfits.

Besides being something of a tourist summer’s paradise, Donsö island is also a functioning suburb to Gothenburg with the extra feature of having more ship owners and freight companies per square meter located here than anywhere else on the planet. Nothing much hints of this though except than that the number of luxury yachts and motor cruisers that are docked here side by side, reminds you more of Cannes at the Cote d’Azur than a Swedish fishing village. 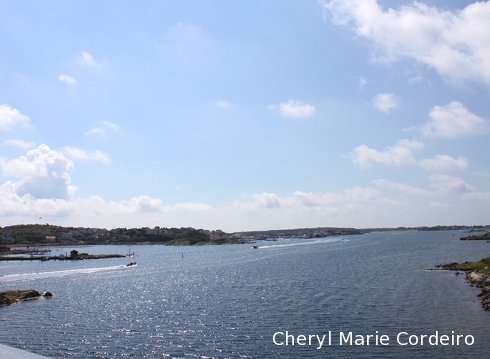 The local lifestyle also filters down to and sets a certain flavour to one of the many popular attractions, which is the annual flea market. It is a charity, organized by the local sports club and goods are donated by anyone who has something to spare. As a teaser the flea market goods were on display but barricaded for two hours prior to the opening time, so that most everyone could not help but find at least one treasure they wanted from the piles of goods displayed just out of reach along the quayside.

The rush and grab once the barricades came down is as great fun to watch as to participate in, to land a bargain find yourself! The styles varied. One of the techniques for the larger items was to toss yourself over it and sit on it, until you could get the attention of some of the sales staff that could put a ‘sold’ tag onto it. Since the supply was plentiful and nobody had more than two hands, the loot was fairly justly distributed I would say. 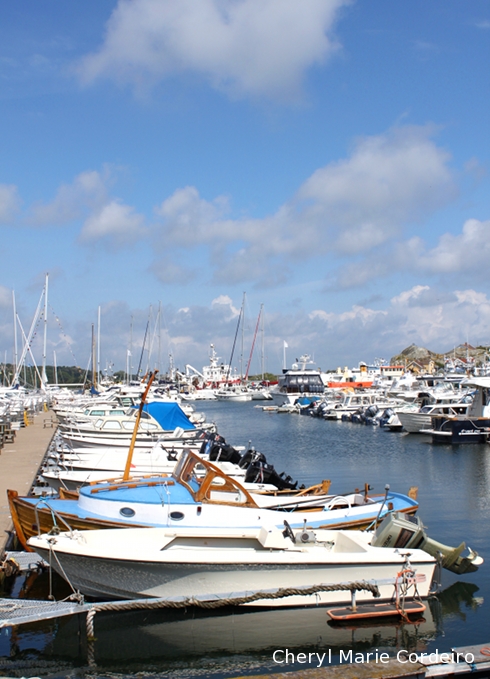 View of the inner harbour.

This year’s festival was distinctly more family oriented and children friendly. A large inflated castle trampoline stood as a cheerful greeting at the entrance to the festival, right next to the BBQ and Grill food stand where families could fill up with food and while their afternoon away before hitting the main market street. It is here that the children hardly seem to get enough of the fun and excitement, making new friends and taking turns on the trampoline slides. 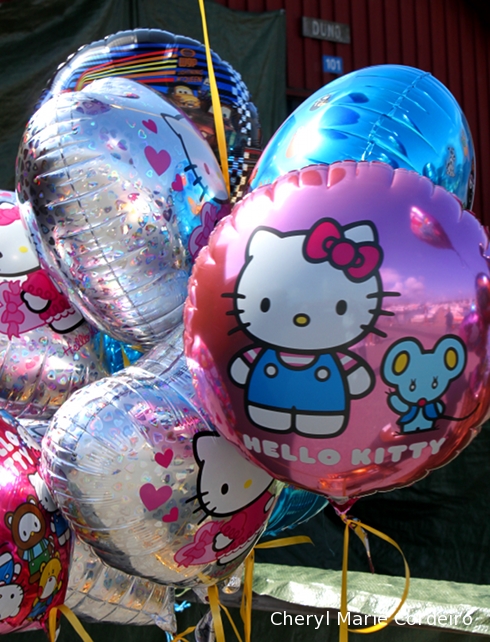 I stood and couldn’t help but smile as I observed how infants dressed in bright pink tutus, others in primary colour ensembles of yellow, blue and green, the attention grabbing colours being as much for the benefit of the parents as for the children themselves, dart untiringly around the adults in vertiguous motion, oblivious as to whether their parents were around or not. Pure heaven in a trampoline castle, if only for one afternoon!

Apart from this year’s two large “bouncing borg’s” that was navigation landmarks to this albeit small and cozy Harbour Festival, there were several ways you could navigate the festival street and various stalls – one was of course to centipede along the main street in the midst of the crowd, but if in a rush, you can also bypass the whole thing if you know what you’re looking for and know where to find it. The quick alternative is to walk along the piers where the boats dock, behind the stalls. This lands you at the mid or the end of the market street in no time! Beautiful view and adjacent to the main crowd, traveling on the fast lane so to speak. 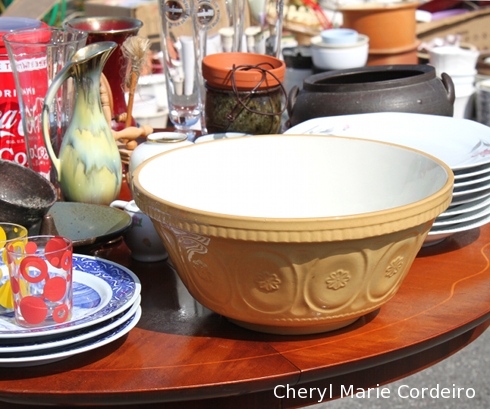 It took effort to resist bringing home this beige ceramic bowl, resembling one that my mother had when I was little during the 1970s and early ’80s. It was a similar bowl if not from the same series and make of bowls in which I grew up learning to make short crust pastry for pineapple tarts mostly for festive seasons such as Christmas and New Year’s. 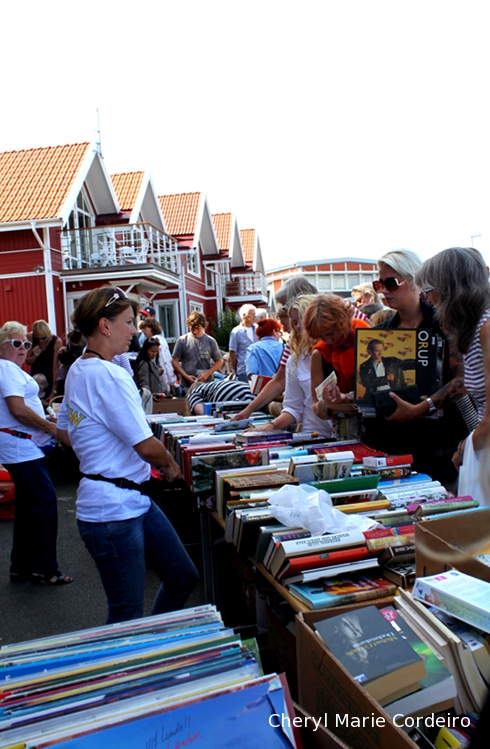 Books and vintage vinyl records, ranging from Iron Maiden and Van Halen to ‘pop top ten’ of 1977. Irresistible to some as well as very resistible to others. 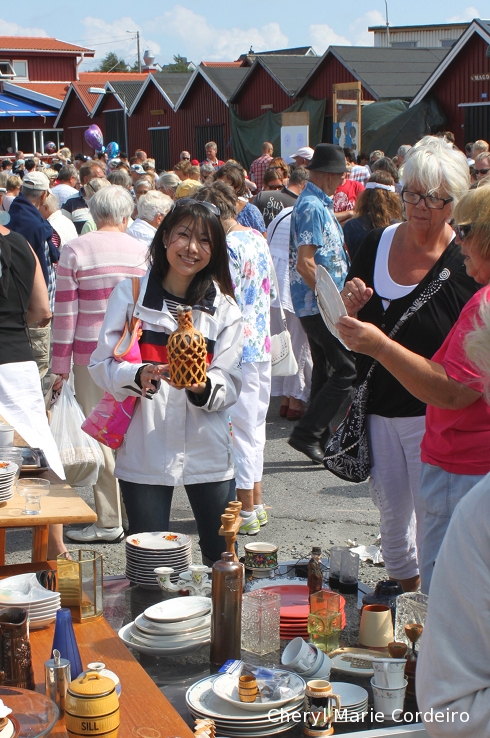 Within two hours I would say that nine out of ten items were gone and I personally could walk off with a nice set of six Martini glasses we have long lacked in the household. 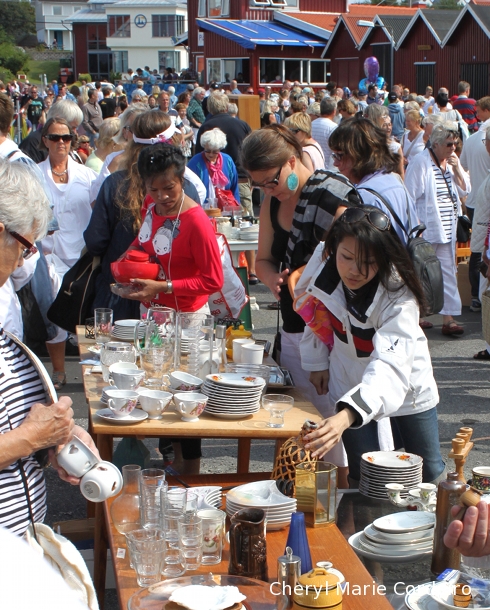 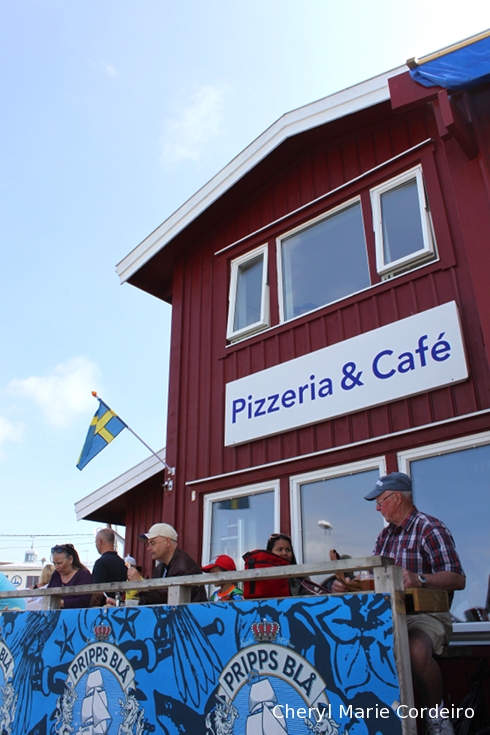 Donsö’s Pizzeria and Café – this one’s open year round.

Apart from the friendly BBQ and Grill tent that stood at the entrance of the main market street, this year’s food took quite centrestage with authentic Sate Ponorogo, which is grilled marinated chicken satay served in peanut sauce, a traditional dish from East Java, Indonesia being served.

Exotic Asian food is often a welcome in Sweden, though there still remains Donsö’s very own Pizzeria and Café, right next to the bowling alley for those more accustomed to the universal palate of the Italian staples of pizza, pasta and un caffè / en espresso tack! 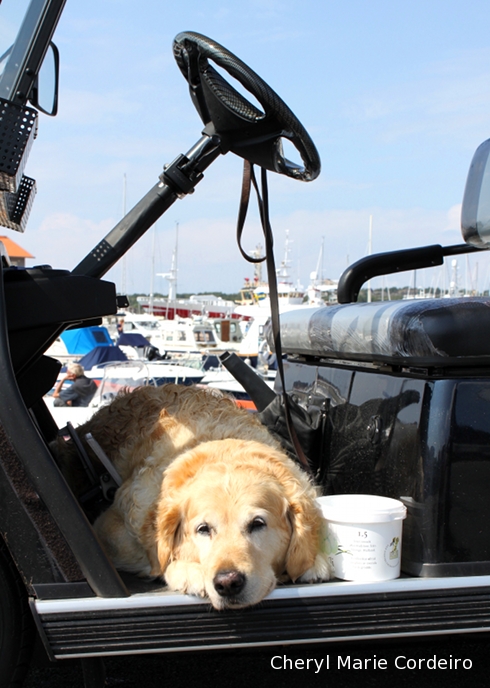 In a golf cart – some manage to find peace and quiet, even in the middle of the market street.

I thought Donsö IS, the local sports community clubhouse that was founded in 1938 and which currently has 850 members, as usual did a brilliant job with the arrangements this year. Crew members were clearly decked in football jerseys and this visual alone helped cue the crowd for persons to go to for help and navigation to places of interest, one of which was the ice-cream stand.

This harbour festival was a convivial and pleasant weekend that marked the summer’s end with a wink towards early autumn along the Swedish west coat. The weather Gods who had this year been unusually moody with occasional showers mixed up with blazing sun and thunderstorms, were friendly towards the whole event and offered warm winds and pure sunshine.

On the whole a joyful event, including the lotteries where you can choose between tickets for electric golf carts or a bucket of freshly caught crayfish.