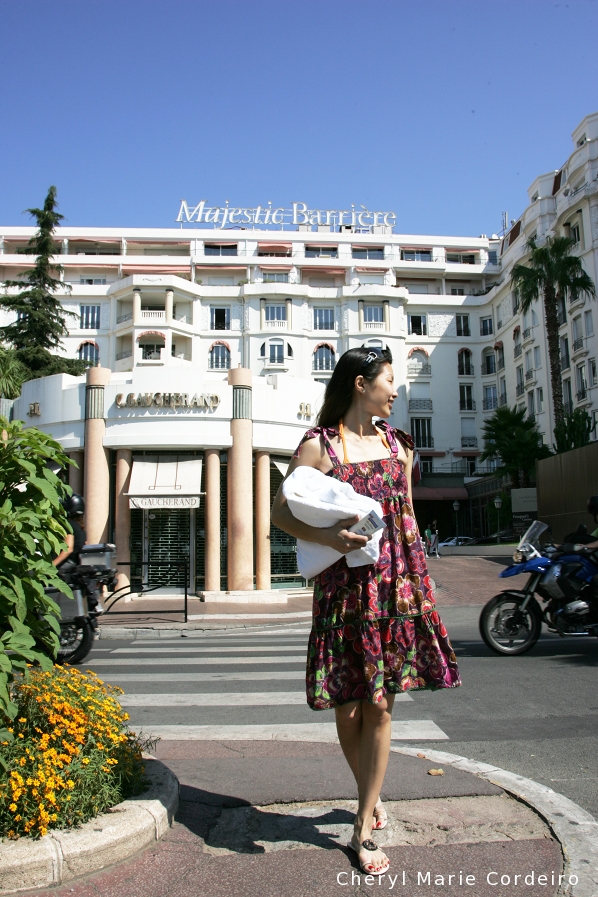 As the beach was just 100m across La Croisette from our hotel,
it was only a matter of grabbing the towels and go!
Text & Photo © JE Nilsson, CM Cordeiro-Nilsson 2008

When in Cannes, there really isn’t much to do in this city except eat, shop and watch movies, so after a hearty breakfast buffet at the Majestic Barrière, we did what most people along the La Croisette were there to do; we went swimming! 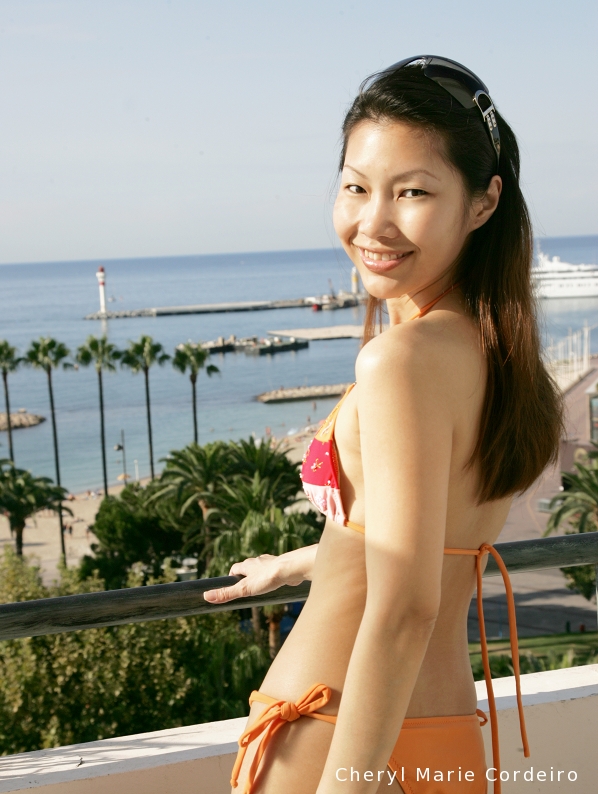 Sun and sand awaiting just across a hop across the street, at Cannes Majestic Barrière. 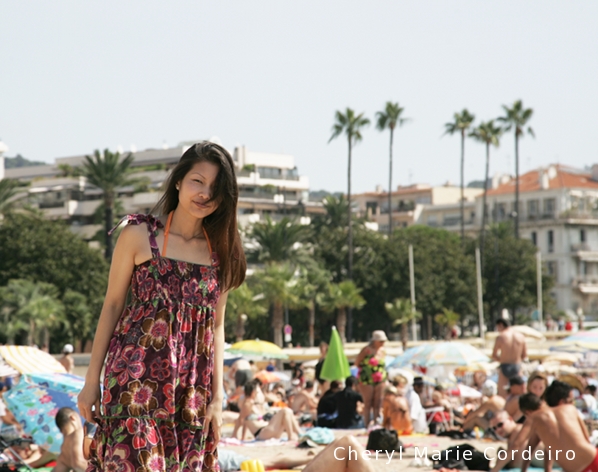 The beach crowd: it was hardly noon, but the beach filled up quickly
with people wanting to catch some sun and relaxation.

The stretch of beach next to the Boulevard de la Croisette is not much of a beach at all and one that filled up quickly and steadily as it approached noon. However, what makes this place special is that this beach is located immediately next to the Cannes Film Festival main building – the Palais – so when the great movie stars need a bikini shot in front of the paparazzis, here is where they go. This is also the location for all kinds of publicity stunts during the film festival. It is here that Brigitte Bardot introduced the bikini bathing suit in 1953. It was also here that Sacha Baron Cohen introduced his green maillot during his promotion of his film “Borat” in May 2006. 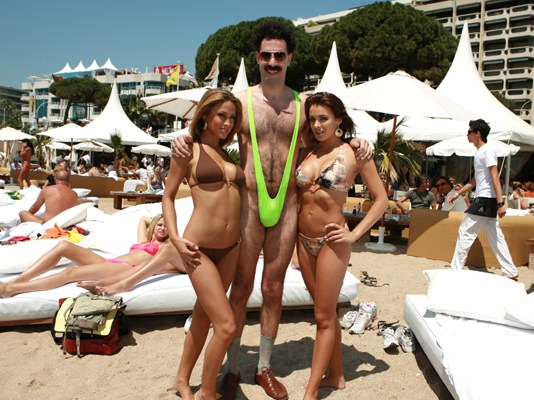 Sacha Baron Cohen as Borat, promoting his film “Borat”
at the beach in Cannes, wearing a green maillot, in May 2006.

All along the Côte d’Azur, the trend of topless sunbathing is also in vogue from when Brigitte Bardot and friends introduced the concept in nearby St. Tropez in the late 1960s and changed the way modern women sunbathe here today. Women, regardless of age or size, sunbathed topless beside sun-bronzed men basking in the sun or playing beach volleyball nearby. 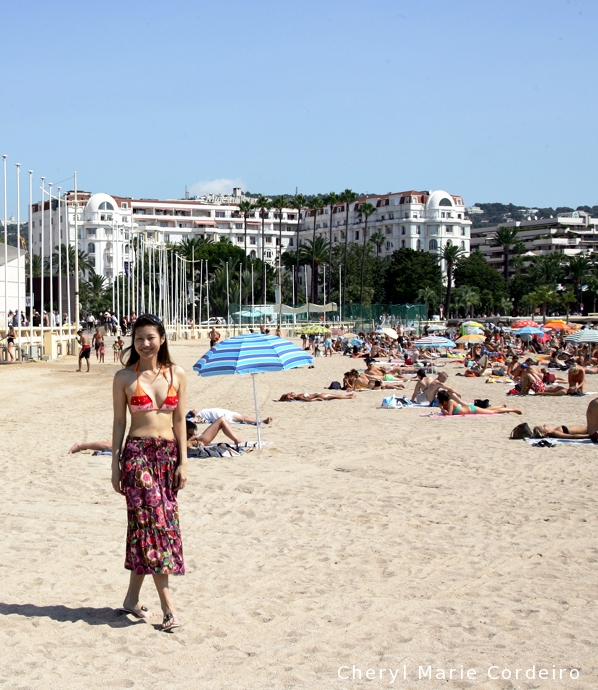 Sun and sand at Cannes.

There are several ways to get a space on this stretch of white sands. Simply spread your towel in your favorite available spot, or head to the section of the beach that is owned by the Hotel Majestic Barrière, where you can enjoy all the luxuries of a cozy spot on their private pier in a sun lounger, under a generous umbrella. 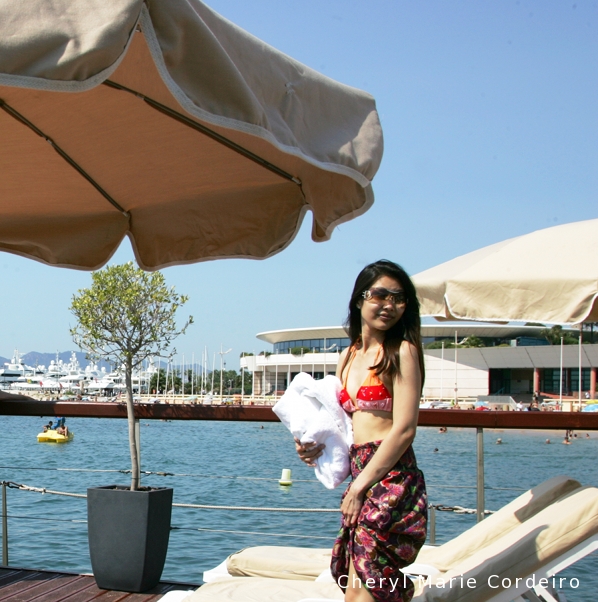 As a guest at Hotel Majestic Barrière you can enjoy a spot of your own
away from the crowd in this sun lounger. Towels are provided and there’s a menu of cocktail drinks to order whilst enjoying the sun!

What I enjoyed the most this day was watching other people enjoy themselves at the beach. There was a group of men who had hired a children’s water slide from the Majestic Barrière and seemed to have the time of their life on their new toy. And then there were children who frolicked at the shallow ends of the beaches under careful supervision. All activities ongoing made us want to get in on some of the action and splash some water around too. Some distance out from the shore was a sizeable breakwater we settled for, and found ourselves adventurous enough to swim out to. 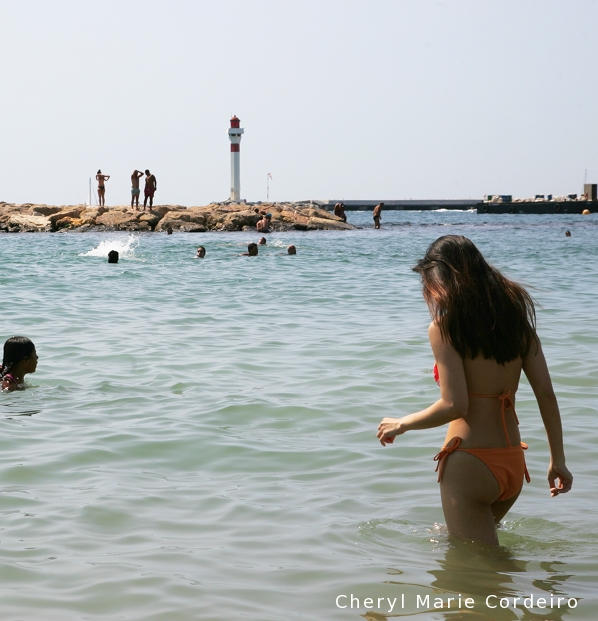 I finally made it into the Mediterranean sea for a swim, but not without realizing that the waters, whilst glistening and inviting from the deck, was much much colder than I was comfortable with. Brought up in the warm tropical waters of Singapore and not at all used to the cold, my next dip will hopefully be in warmer waters.