On the slopes of Mount Vesuvius 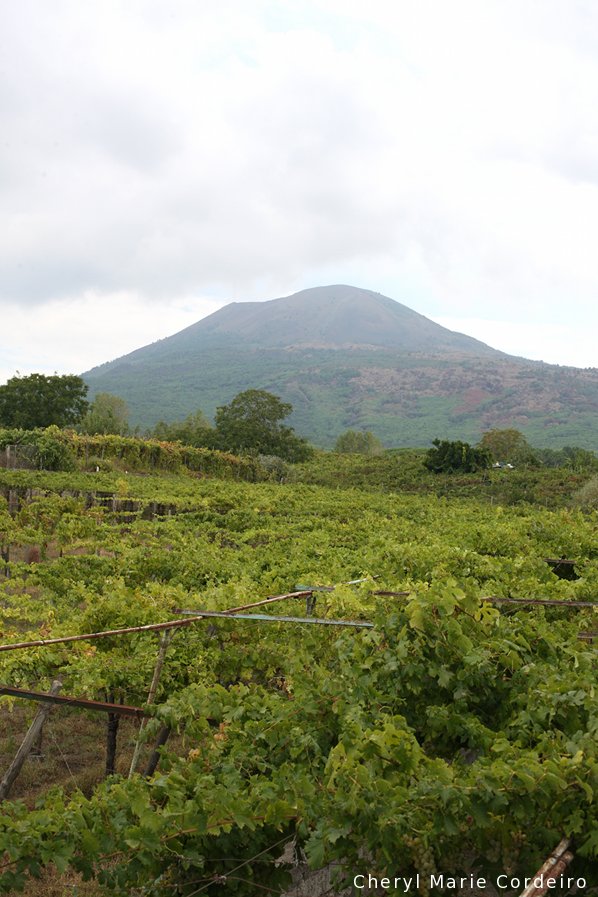 Lush, with a hint of aridity in the air, is what I would describe the climate that surrounds the undulating lands around Mount Vesuvius just about this time of year. That, and a certain solemnity and silence that blankets the surroundings. But this solemnity is permeating, because I have felt this sense of quiet even in the heart of the city of Naples when walking along the Gulf of Naples. We walk around the vineyard with our guide who knows the grounds well. The landscape reminds me somewhat of the landscape found in southeastern France.

It was about lunch hour when we strolled about the grounds where we were introduced to the various grape varieties planted, as well as other friendly vegetables complementing. Walking with a few steps between us in distance, our guide suddenly turned to us and said, “You know, I’m training running”, with a nod in the direction of Vesuvius. “In case that mountain decides to wake up again. I am training, running to the sea”. He then looked at the ground around the gorgeous vineyard and continued, “Stupid snakes that live here. You know, I found a snake the other day, a small one. But, a snake.”

“There are geckos too. Plenty of them” I replied, “They’re cute little things. They have their own lives and like this place, probably the snakes too.”

He seemed surprised that anyone would call reptiles ‘cute’. He smiled.

The first vineyard of the Sorrentino went into making wine only for family and friends. Friends who came visited eventually increased the business.

The original vineyard is the small part of today’s area that is built after the thousand years old model of pergola, where the wine leaves themselves provide some shadow to the grapes. These trellises are visually appealing and have the initial duo-function of providing a shaded outdoor area under which you can dine. With greater demands the wine yards were extended. That was almost one century and several generations ago.

The pergolas, whilst visually beautiful, and practical in providing for shade in the heat of the Mediterranean summer, as a method of grape cultivation for greater commercialisation is however far from ideal. From an industrial point of view, in the event of large harvests, it becomes very tiring and time consuming with head tilted upwards and hands above the head, to gather all produce head tilted upwards. Today, most commercial vineyards harvest their grapes from straight rows of equal sized bushes.

But even with commercialisation of their wines, the Sorrentinos have chosen to preserve their heritage and craft with a mixed-methods approach to grape cultivation. The original pergolas have been retained in the old section of land. And instead of lonely toil, an invite to harvest is extended to family and friends to help when the grapes have ripened and are ready for picking.

Business has grown, and the Sorrentino’s have today several award winning wines they proudly attribute to family traditions, traditional craftsmanship and the fertile volcanic soil that gives the grapes and wine a distinct flavour.

The grapes themselves were what interested us the most. 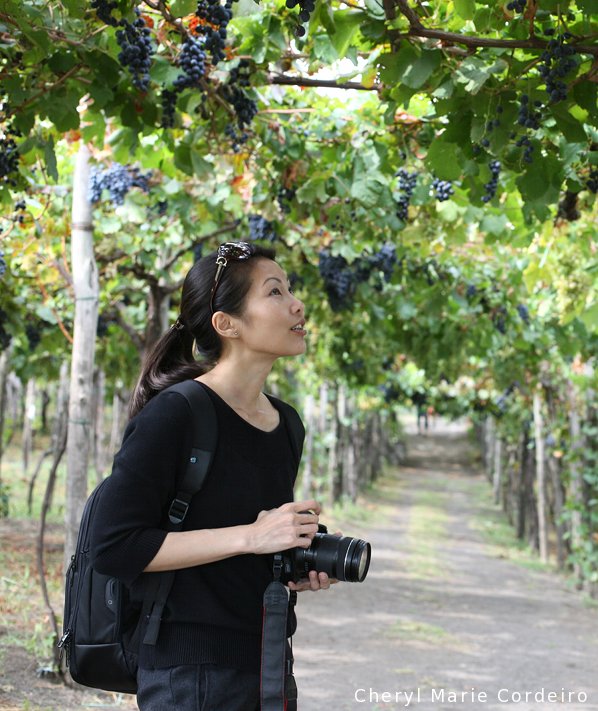 Visiting the oldest parts of the Sorrentino family vineyard on the slopes of Mount Vesuvius, Naples, Italy 2016. Listening to a story that began with the making of wine on these grounds for just family and friends.

The variety of grapes grown in the area could, as it were, be seen as living relics. To understand Sorrentino wines and what you are presented for drinking in accompaniment to each meal, you will need to think back to the time before Christ, before the Roman Empire was even an idea. You need to think of the time when the western civilization was founded by the Greeks. Of the time of Homeros, Socrates and Plato. If they had wine at all, it would have been of the kind they have here at Sorrentino’s. If you see a two thousand year old painting of Bacchus on a wall in Pompeii, holding a bunch of grapes. Same thing. It is literally what is still growing here.

The reasons are both historical and biological. When the Greek colonized southern Italy it was to cultivate grapes and make wines for the purposes of trade. The volcanic soil here and on Sicily was and continues to be great for grape cultivation. Pompeii was at the time of its destruction in the year 79 AD, supplying half the Roman market for wines. When the great phylloxera epidemic in the mid-19th century destroyed most of the vineyards for wine grapes in Europe, the South Italian crops and thus resulting wines were unaffected thanks to the volcanic soil.

So as a visitor, when you are shown the oldest vines of the vineyard, you will also get the opportunity to see how the grapes were grown just as they were when planted as it was in antiquity, with vines overhanging a low terrace. You will be presented with a scene Bacchus himself would surely be appreciative of. The stems of the oldest vines are thick, naturally flaking of its outermost layers of bark in varying shades of grey-brown hues. They grow beautifully twisted and determined in their structure. They had survived the tempers of Mount Vesuvius and proved more as a tangent force to the web of nature in the region, claiming as much of the ground as their own, as the lava rivers would in their turn of nature’s events.

In the midst of the vineyard is a lookout thatchet built in two storeys. We spent some time there towards the end of our visit. Hands hanging over the rails, we were not just overlooking the land but rather contemplating the location of ancient Pompeii in relation to the location of the vineyards. We marvelled at the fact that over the centuries, the city had now grown to be cosmopolitan, without losing its founding values and heritage. Time here, is different felt. Slower, calmer, with a deep resonance of respect for nature’s offerings.

Without doubt, my favourite part of being at Sorrentino’s was just that – to walk around the grounds, be introduced to the grapes that make the wines, and most of all, to take time to do so. The peninsula of Italy, located in the centre of the Mediterranean Sea, makes for an unrivalled ecosystem. Italy has Europe’s highest level of biodiversity, more than a third of all European fauna combined [1]. The geckos that inhabit the vineyard seemed friendly enough, and wont to visitors. They might have a few things to say, if we would give them the time of day. 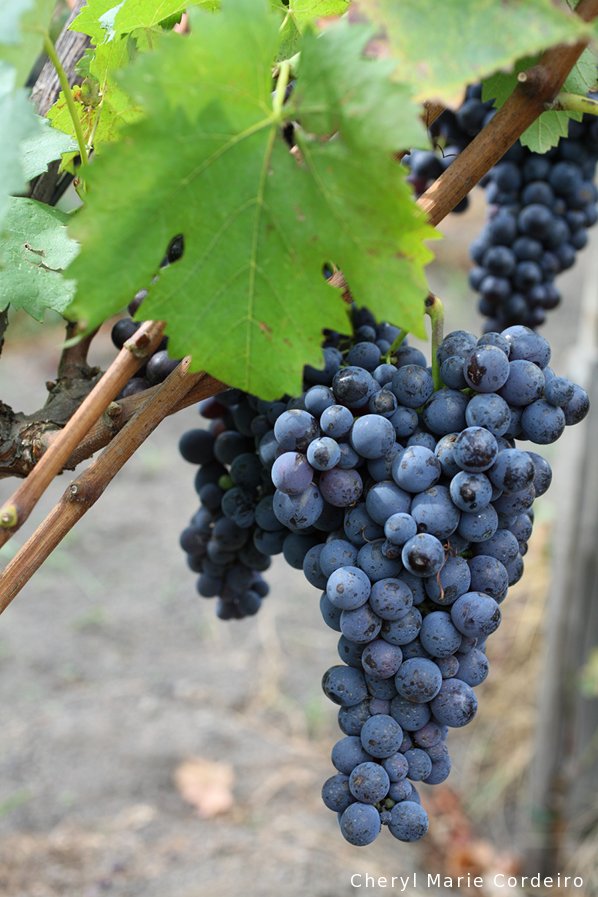 “The best organic and zero distance. Here, we grow a lot of our vegetables we serve in the restaurant. And we alternate it with the grape vines. It’s old knowledge and it is the way we use the land so that it doesn’t get too tired.” I couldn’t more agree with that life philosophy. 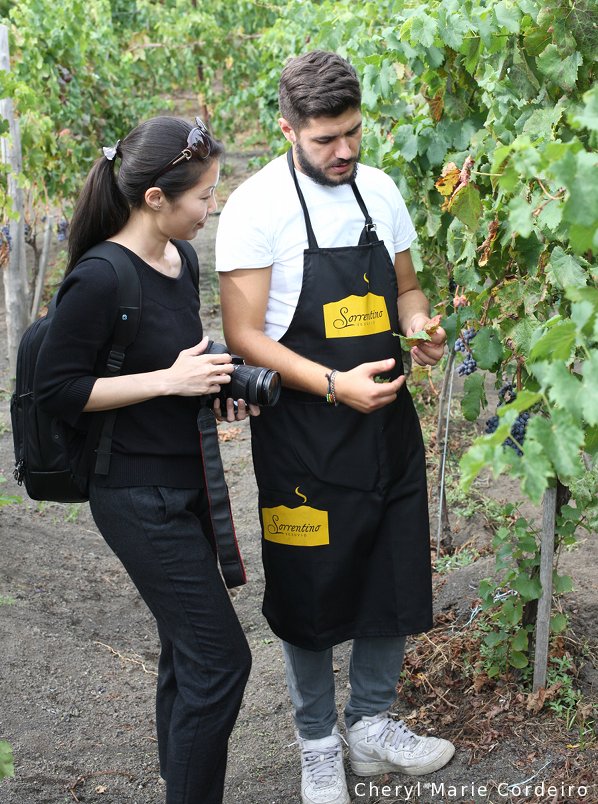 “You see the leaves? The pattern on it? – It is distinct to the region.” 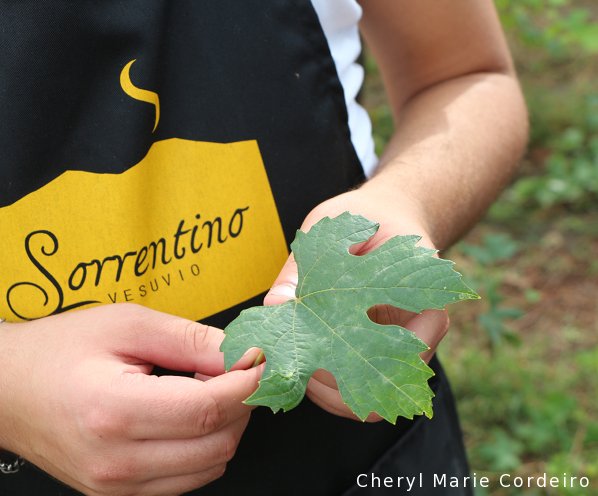 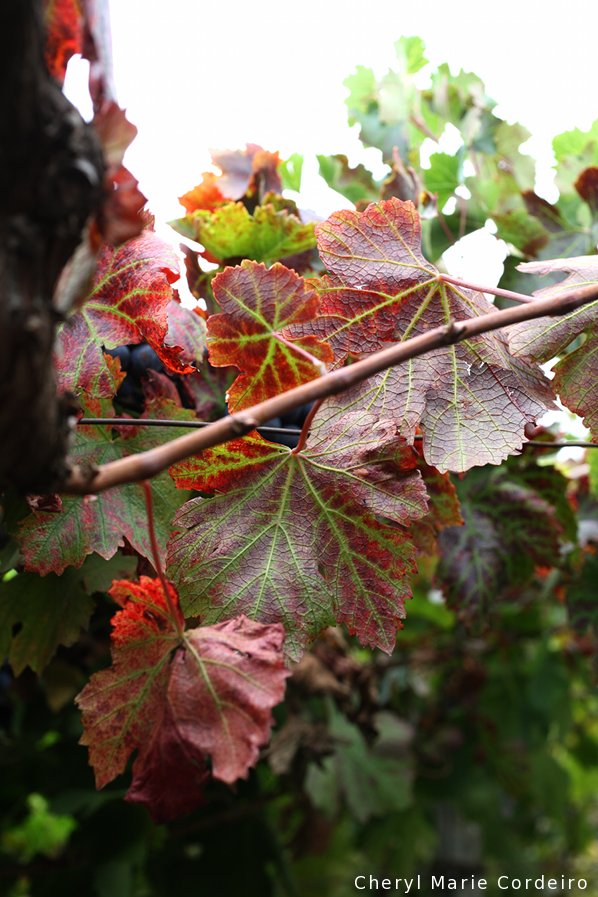 Leaves of the Piedirosso grape vine that is grown in the Campania region of Italy, the skin of the berries have a deep purple hue, almost noir. 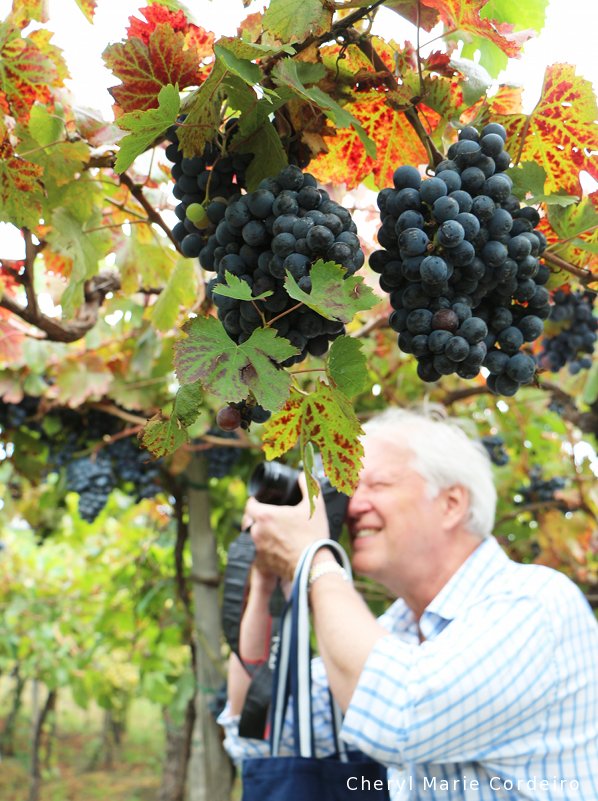 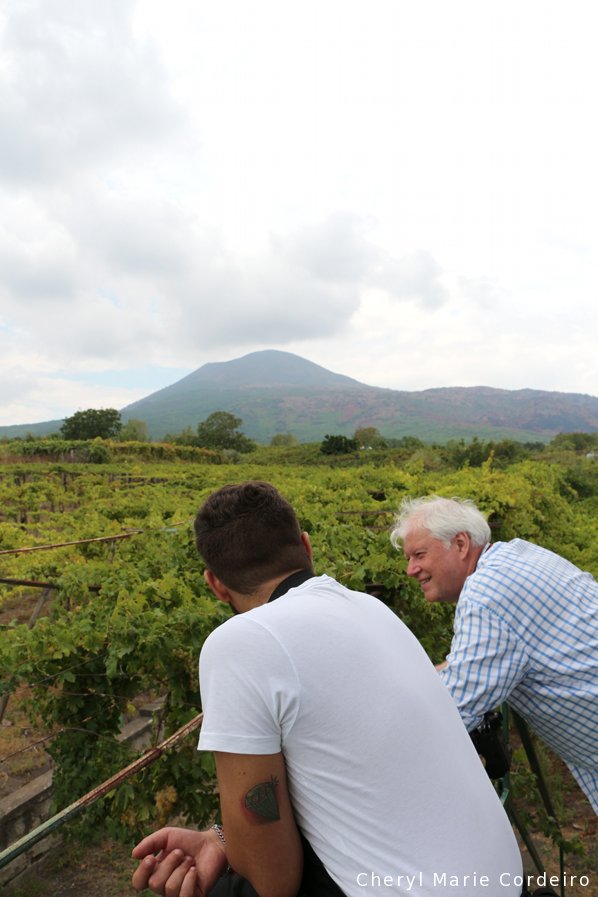 A view of the vineyard from inside of the restaurant at Sorrentino’s. 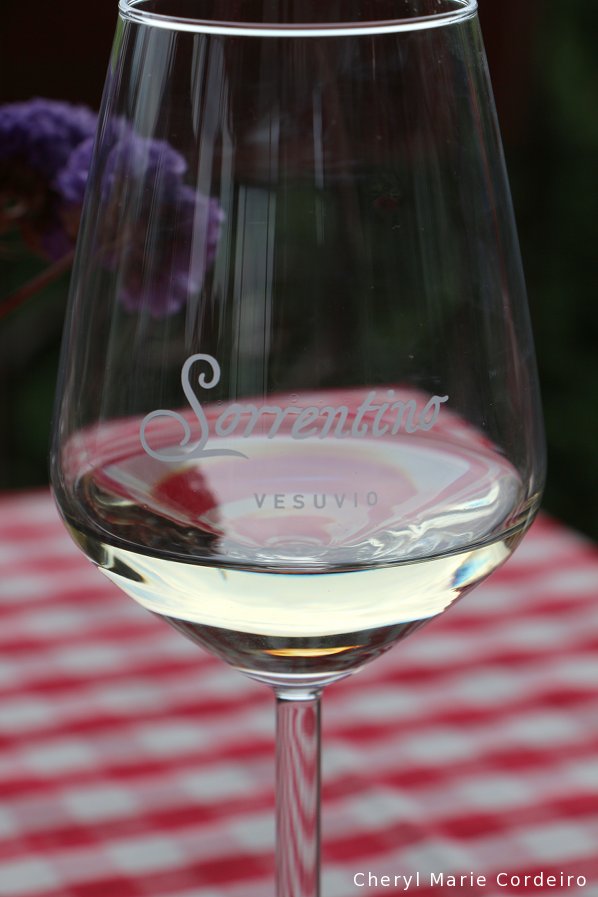 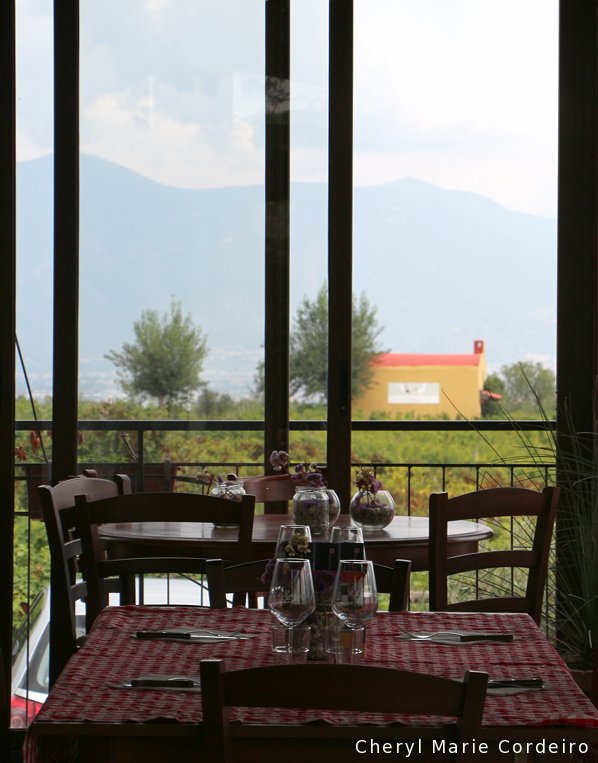 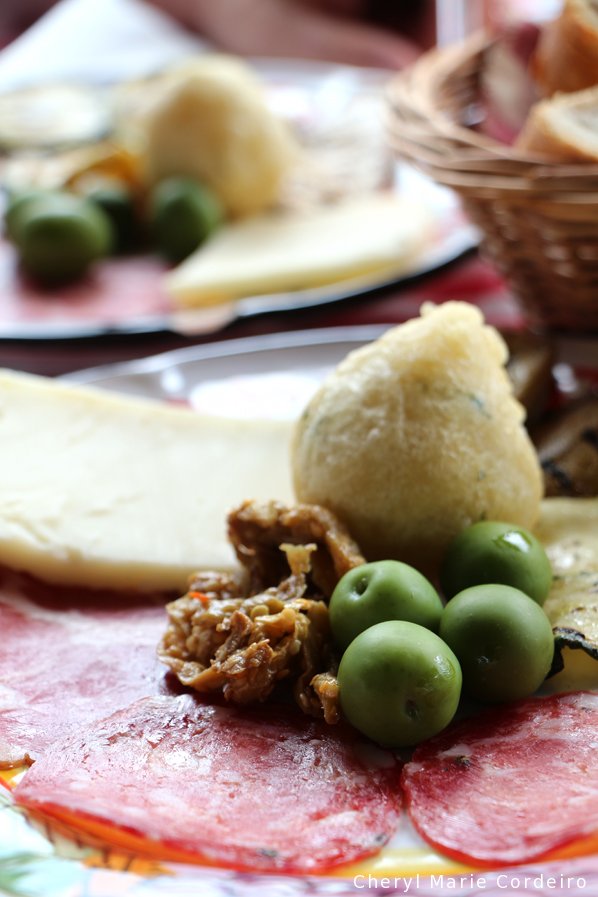 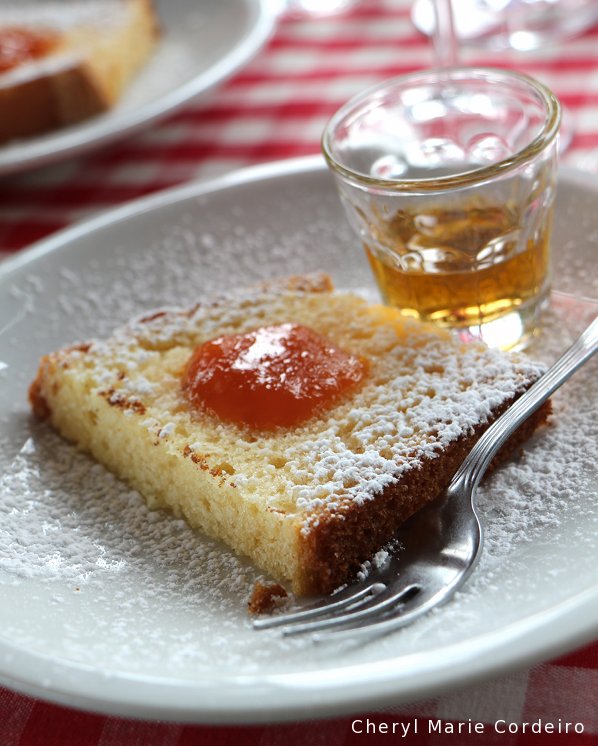 This cake reminded me of the orange almond cake I found at Pastelería Escribà at La Rambla Sant Josep, Barelona in 2014. A slice of sheer heaven, here served with Sorrentino’s Fior di Ginestre, their dessert wine made from a mix of the grape varieties, Falanghina and Coda di Volpe. 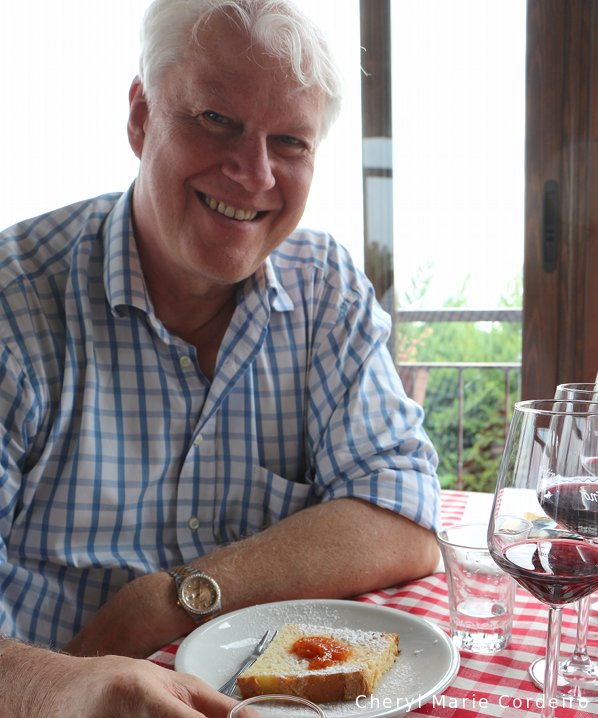