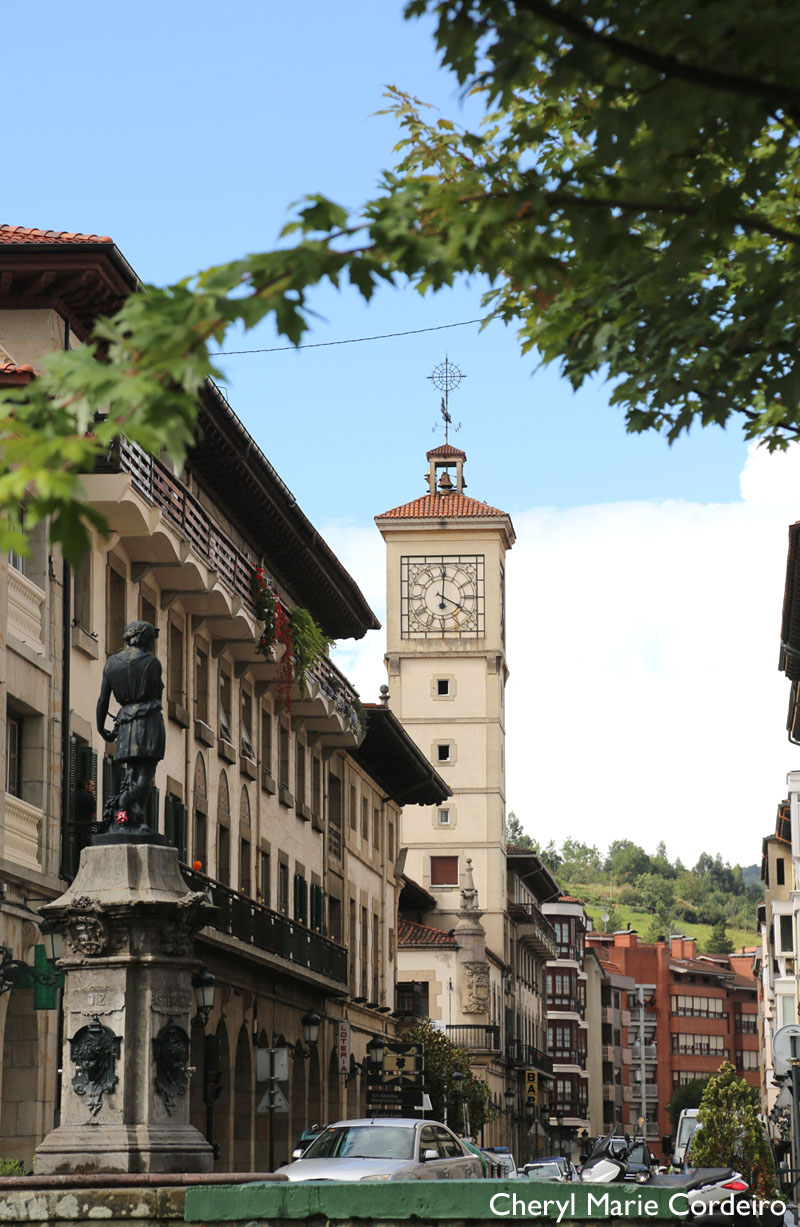 About an hour’s train ride away from Bilbao, Spain, is the town of Guernica or Gernika-Lumo. Basque Country outside of the provincial capital influences and its industries is heterogenous. Passing by in a train, a fleeting glance could make one label agricultural Basque region as ‘rural’ or ‘traditional’, termed as such because these places have either remained untouched by urbanisation, with no evident applications of modern technologies and/or have not reached mass consumerism [1]. But a closer study indicates that alongisde a mixed agricultural economy is an impressive inshore fishing sector supported by small and medium enterprises complements local agriculture, whose economic influence is impactful enough to make changes to the daily lifestyles of its people from how they allocate time between work and leisure, and what forms of entertainment they prefer [1].

For Gernika-Lumo, not a hundred years have passed since the Spanish Civil War of the late 1930s. Under the soft drizzle of the late summer’s rain, Guernica, or Gernika which is the Basque spelling, looks very different than anyone more familiar with Picasso’s representation or indeed the old journal films of the late 1930s would have lead anyone to expect.The bombing of Guernica on 26 Apr. 1937 was made on the personal request of Francisco Franco, who at the time enjoyed military support from nazi Germany and fascist Italy. The devastation of Guernica was an experiment and a way to decide in a discussion within the new Nazi Luftwaffe, if an enough horrible attack on defenseless civilians would lead them to give up and surrender, or to just fight harder. This was the first intentional terror bombing of civilians in the history of modern warfare. The torn civilians of Guernica did give up. The lesson was learnt, and this dragon seed led to names of events that we know more of such as Dresden, Nagasaki and Hiroshima.

At the time, the bombing of Guernica created a worldwide uproar and made visible the divide between the power hungry and the artistic, more civilized part of humanity. The latter are best represented by Picasso’s masterpiece Guernica, which in my view, might well also have been the inspiration to the architecture of the Bilbao Guggenheim Museum.

Today, Guernica has become an international symbol of peace [2] due the senseless violence and waste its people endured during the hours of uninterrupted destruction. The onslaught left 70% of the town completely destroyed and most of the rest, seriously damaged. Guernica was in the early 1900s, a small market city with hardly more than 6,000 inhabitants. Some accounts say that almost one third of them perished in the attack that went on in wave after wave with different kinds of bombs, from light to heavy to fire bombs. The central idea was to force people into shelter, and then set fire to the rubble. Today, the city is inhabited with slightly more than 16,000 people.

For someone coming from outside of Spain, I find the beautifully kept surroundings and quiet streets difficult to reconcile with its painful past.

Guernica continues to voice its painful narrative, but today, it does so not only for itself, but for others like itself, being a voice for the refugees of the world [2]. The town, with its Peace Museum (Museo de la Paz de Guernica) and its oak tree of Guernica (Gernikako Arbola), remains an acute international point of awareness on the importance of respect for a(/any) people’s autonomy and will. It is this town and its senseless bombing that inspired an immediate reaction from Pablo Picasso to paint his most famous political work and statement, Guernica 1937 [3]. The painting Guernica by Picasso has as homebase exhibition the Museum Reina Sofia [4], Spain’s national museum of contemporary 20th-century art located in Madrid.

Difficult, but if you could look at the town for what it is now, the avid bustle of the morning market, the laughing conversations in the numerous cafés that line the neat streets of Guernica, I think visitors might find the place a calm respite from the larger cities that Spain is better known for such as Barcelona. At least, I did. Walking down the streets, I managed to encounter a confectioner’s place, Pasteleria Bidaguren, that artisan baked cakes and biscuits that reminded me so much of what my father’s mother would bake (or acquire) as soon as she knew that her grandchildren would be over to visit for the weekend afternoon. Picking up some goodies that they paper wrapped and string-tied for me for the continued stroll through the town’s parks, Pasteleria Bidaguren had quickly become my favourite confectioner from my visit to Guernica. Quintessential Basque cuisine, pintxos or finger foods, usually of a variety of locally sourced seafood items laid neatly on small slices of bread can also be found in the town’s bars and restaurants, sone of which remain open through siesta hours. 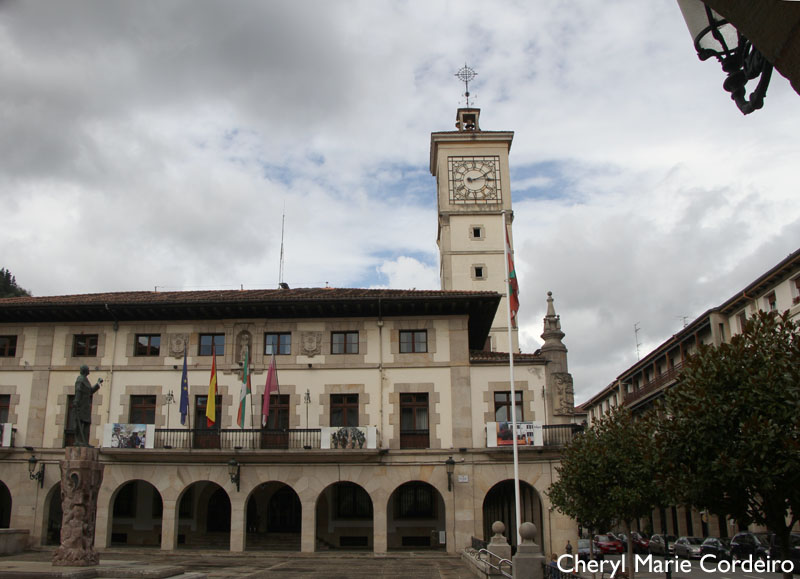 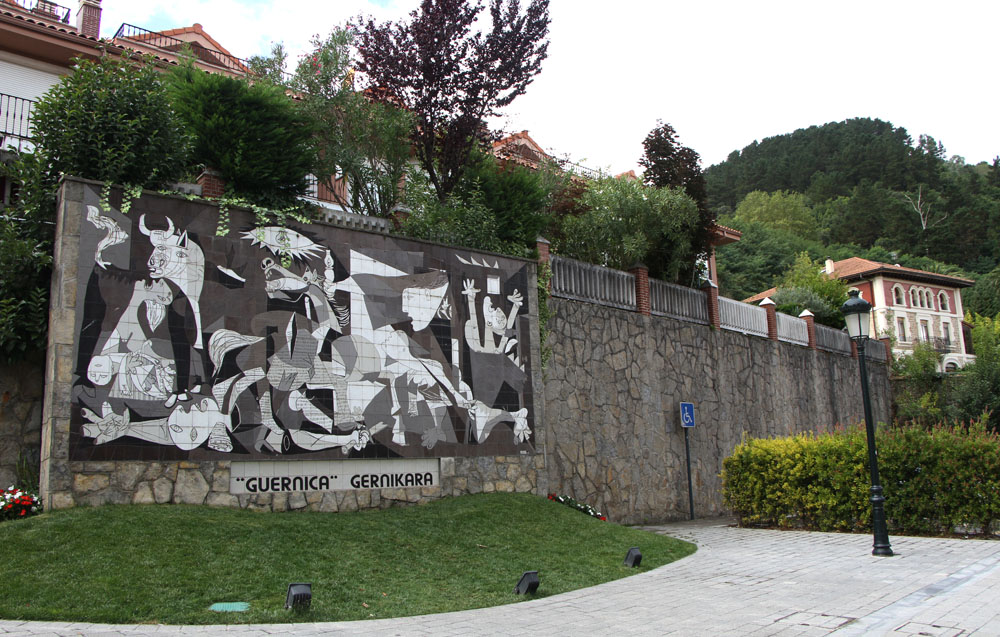 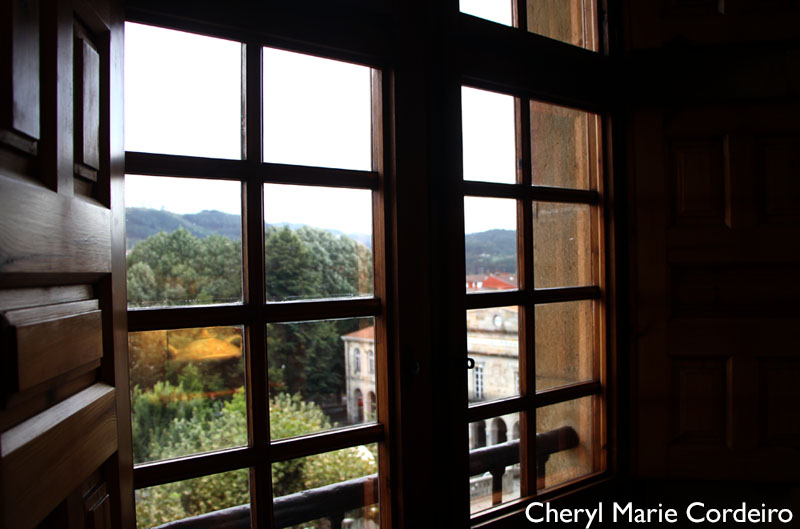 A view from inside the Euskal Herria Museum in Guernica, Biscay, Spain. The museum is housed in the Alegría Palace, and is one of the only buildings in Gernika to have survived the bombing of 1937 during the Spanish Civil War. 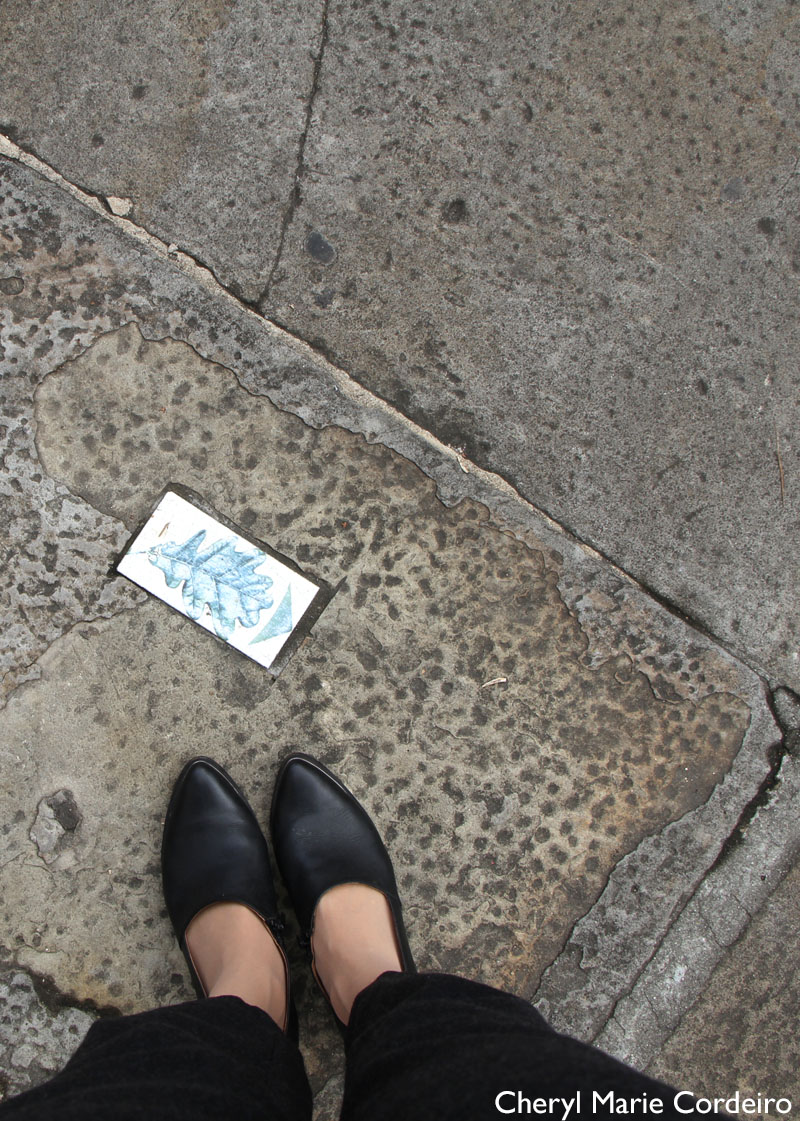 Tiles in the ground marking the way to the Guernica Tree. The Guernica Tree is an important political symbol of autonomy and independence of the Spanish Basque Country and its people. It was under the branches of this Tree that the Biscayan liberties were sworn to be respected by the Lords of Biscay. The first documented Guernica Tree dates back to the 14th century. 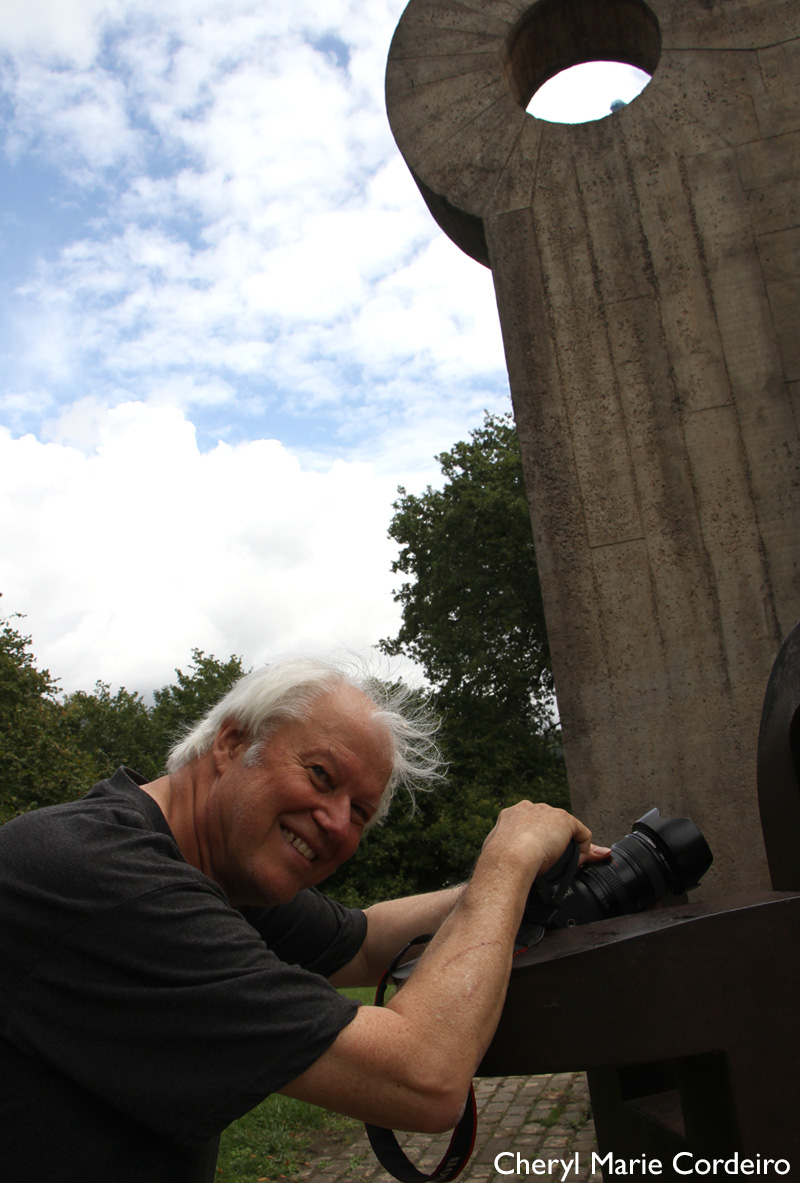 At the Park of the Peoples of Europe.
Standing at the sculpture of Eduardo Chillida, called Gure Aitaren Etxea (The House of Our Father), with a view to the garden where the oak trees of Guernica stand. 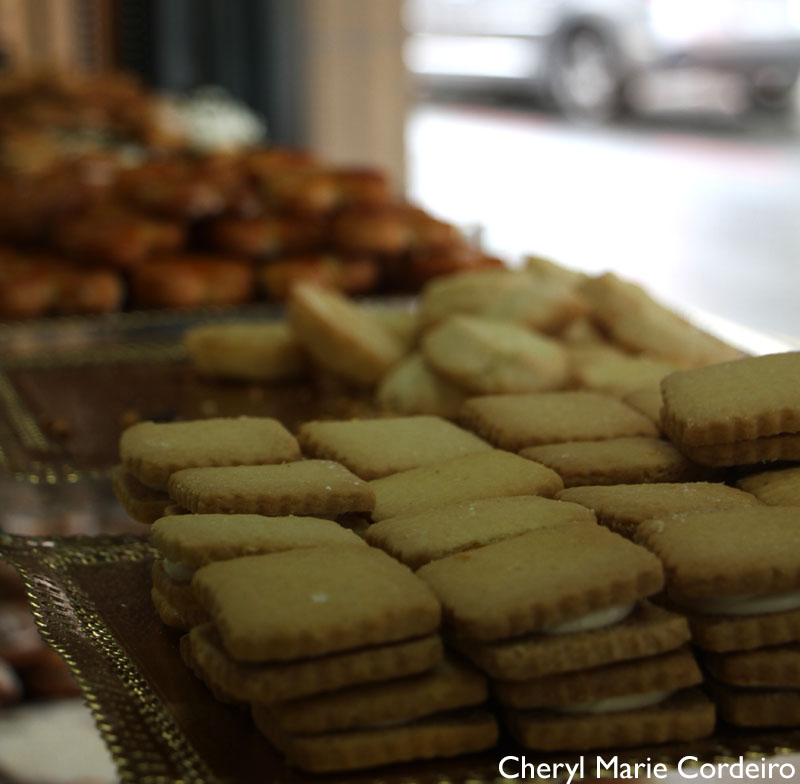 Pasteleria Bidaguren, Calle Juan Calzada Kalea, 23.
Bakeries and cafés are plenty around the town of about 16,000 inhabitants. Some confections served, I’ve found to have reminded me of things my father’s mother would have baked on the afternoons when her grandchildren were visited. 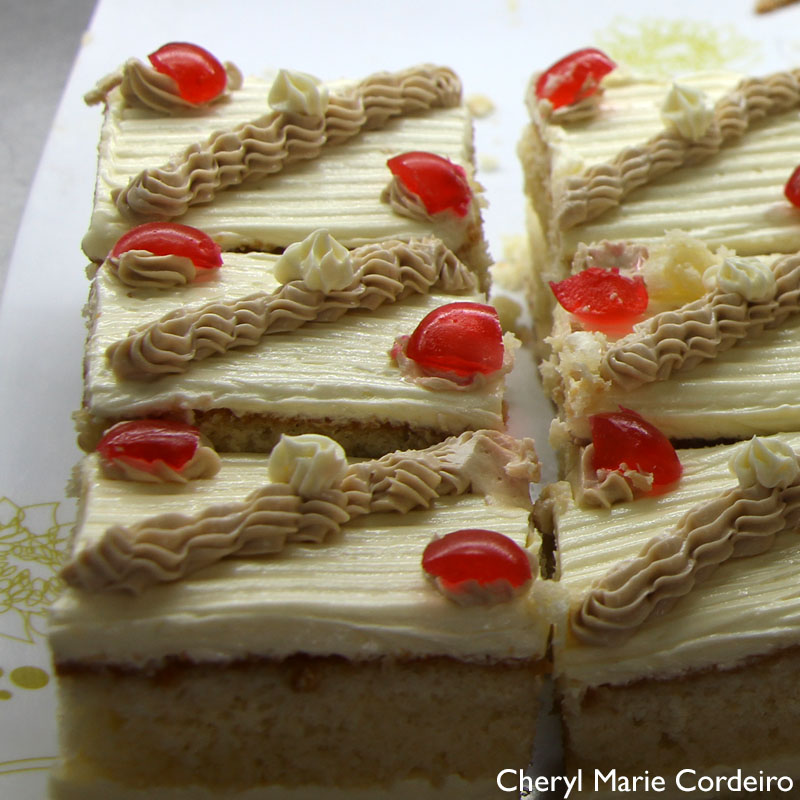 A spongecake topped with almond buttercream and red glazed cherry. 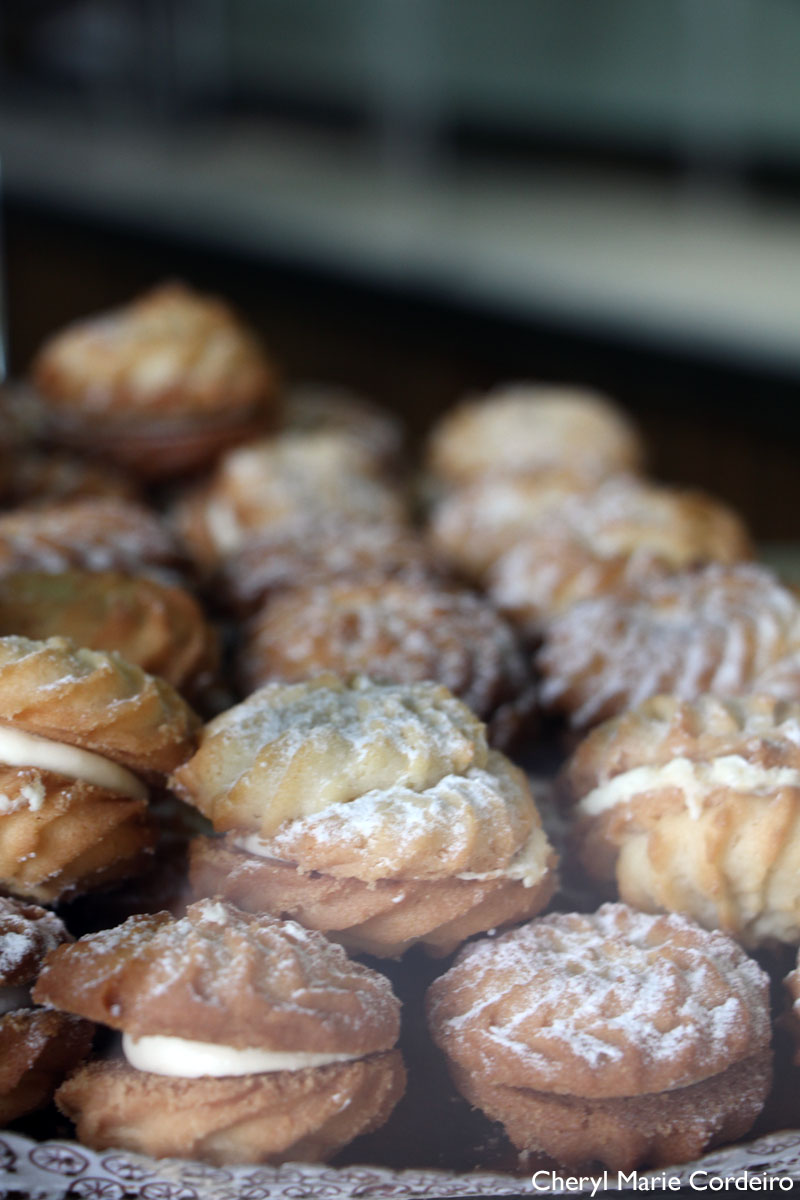 Biscuits such as this vanilla cream filled variety, are made artisan by Pasteleria Bidaguren and are sold by weight. 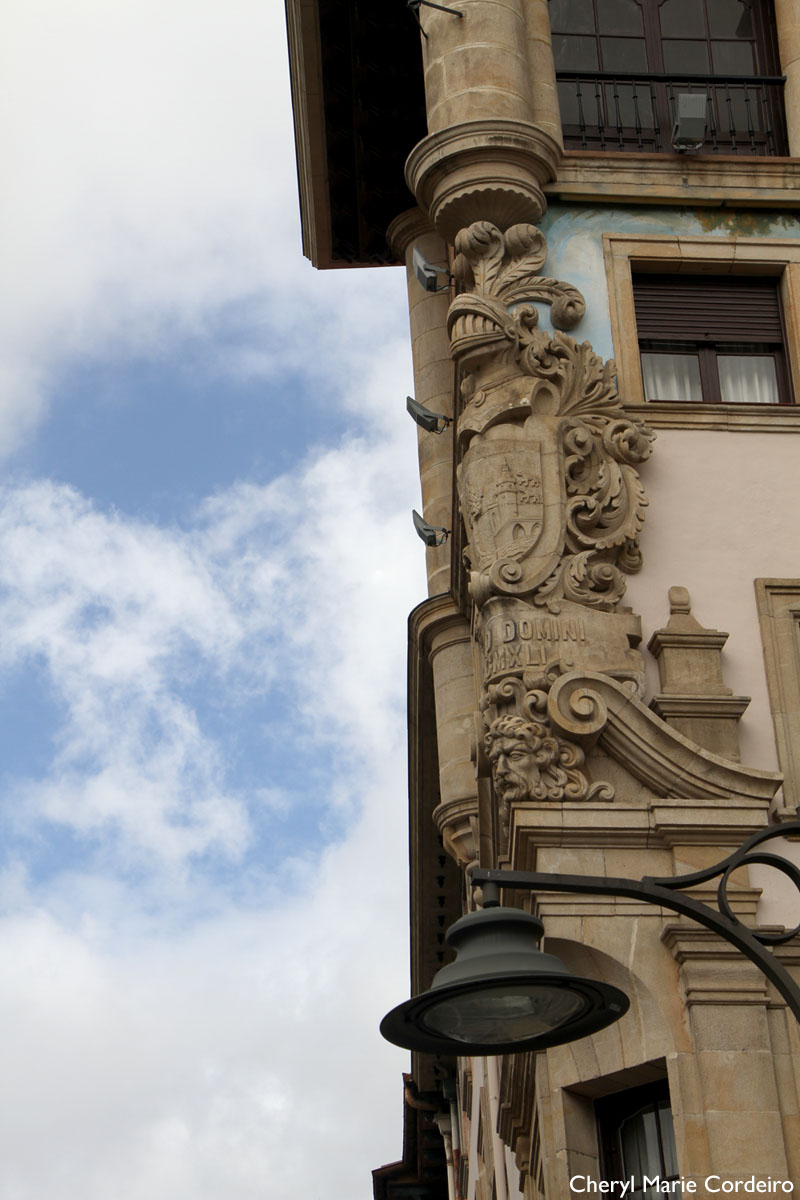 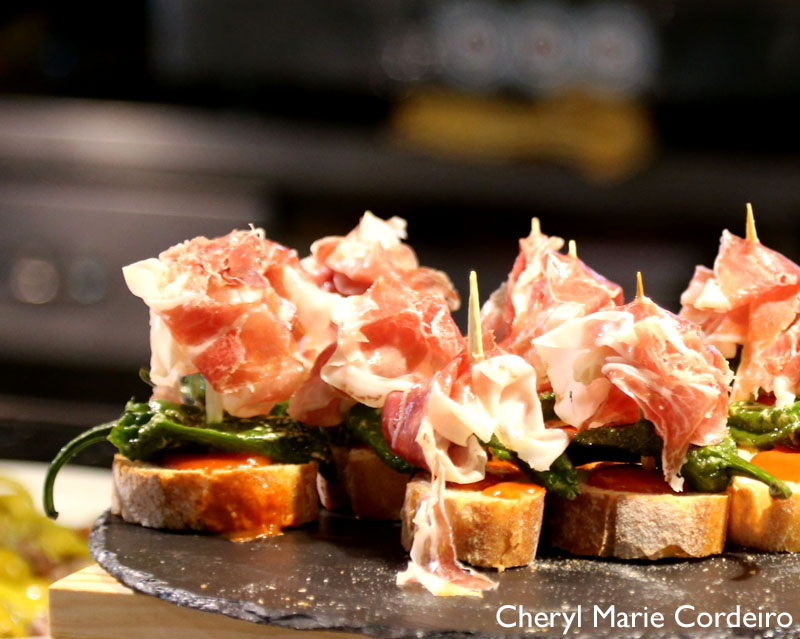 Pintxos.
In Basque Country, what you find are a myriad of toppings on small pieces of bread. The most creative I’ve found is a crusted and deep fried Béchamel sauce filled croquette served on top of a blueberry jam toasted bread. Pintxos or finger foods are quintessential Basque, different from Spanish tapas per se. 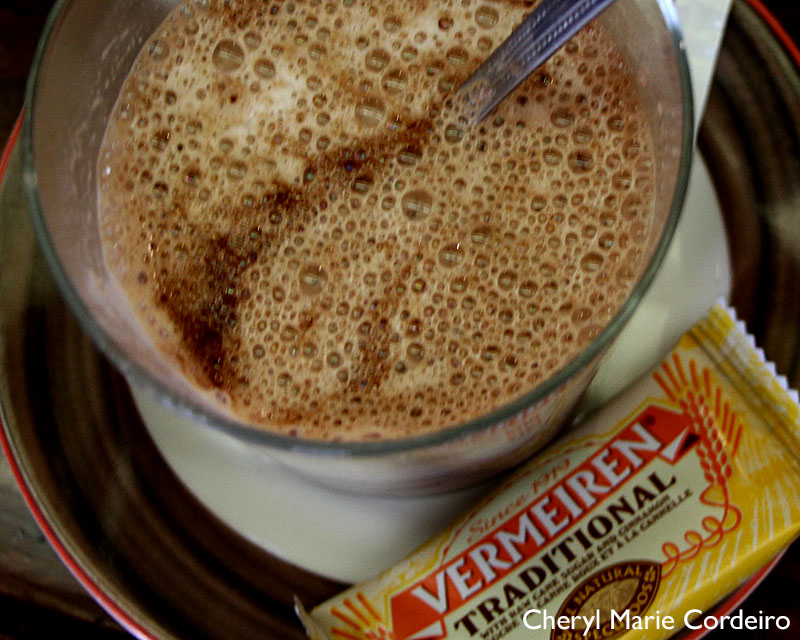 A hot chocolate and a biscuit on the side. 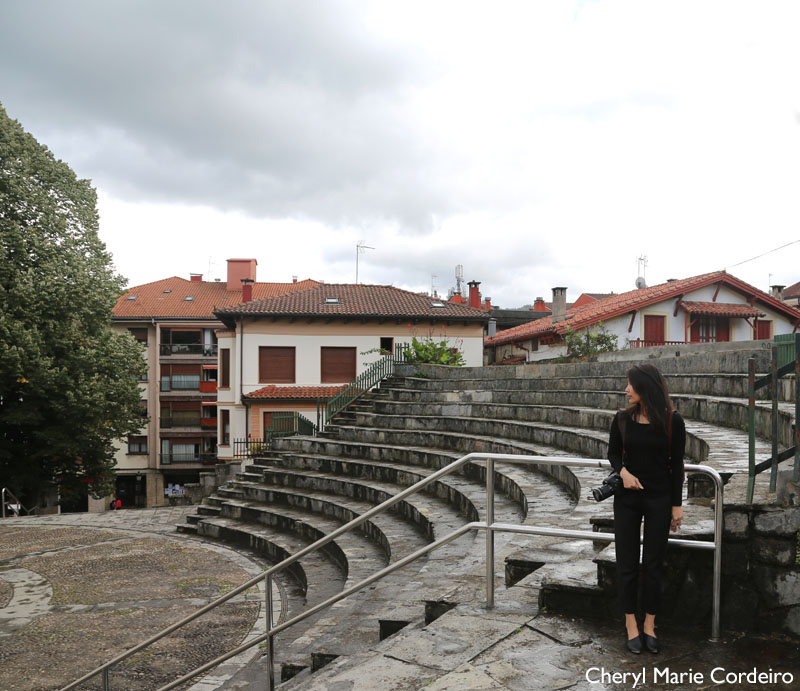 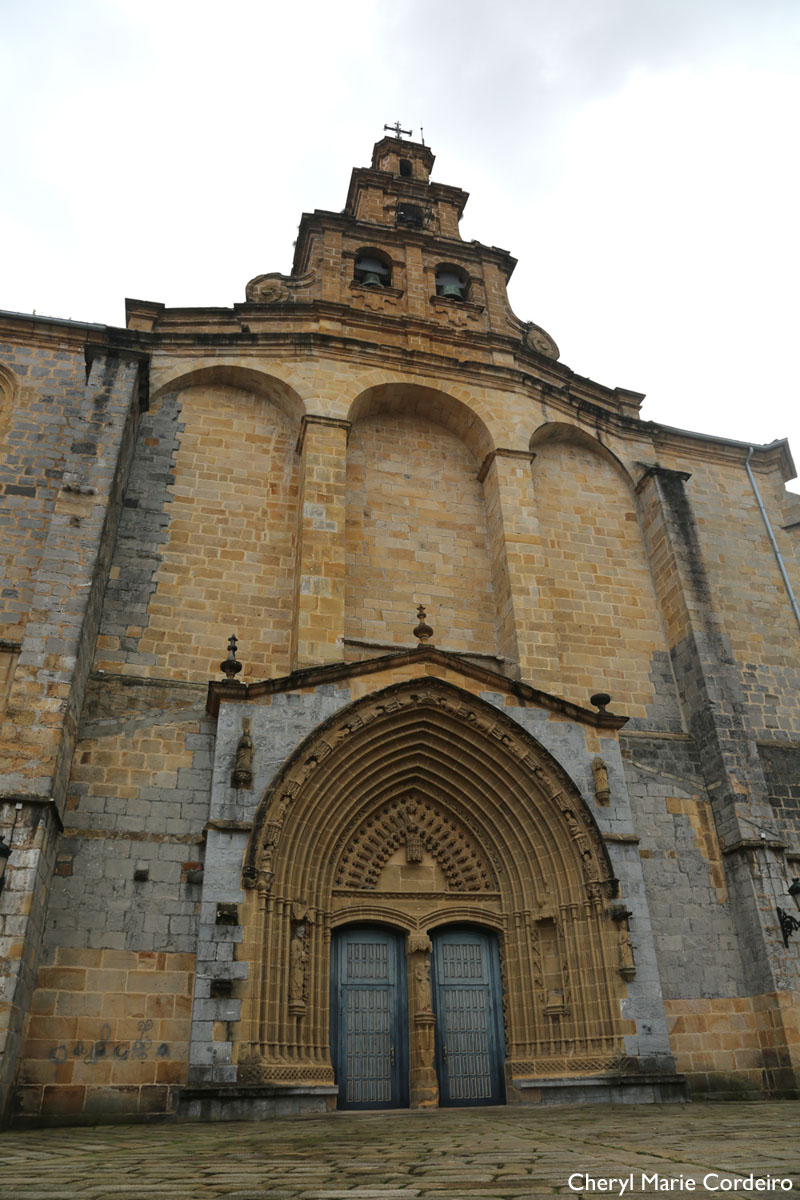 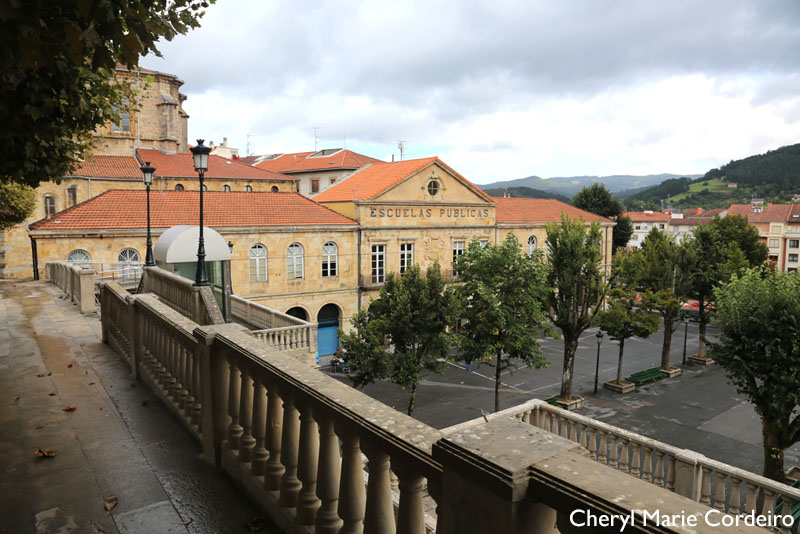 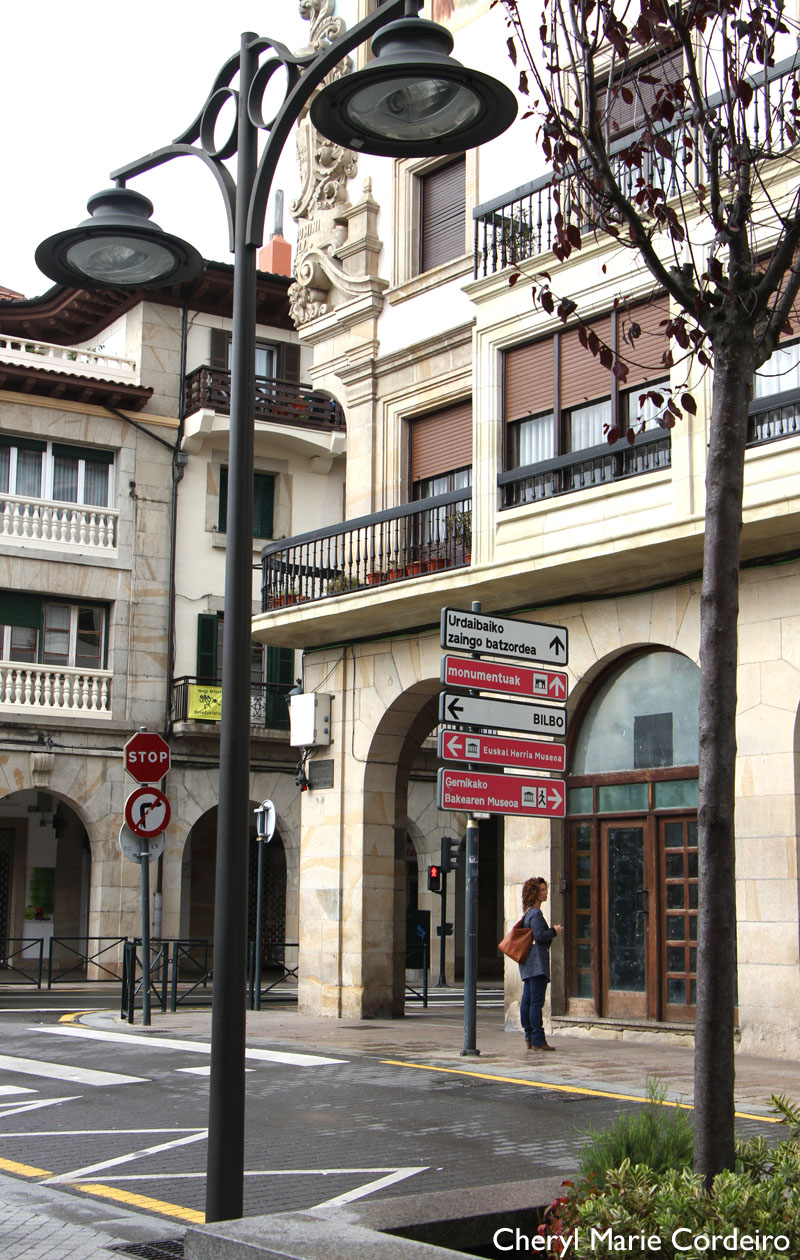 A street in Guernica, Biscay, Spain.
Re-built after the Spanish Civil War bombing, Guernica today has some of the most beautiful streets lined with distinctively styled street lamps. 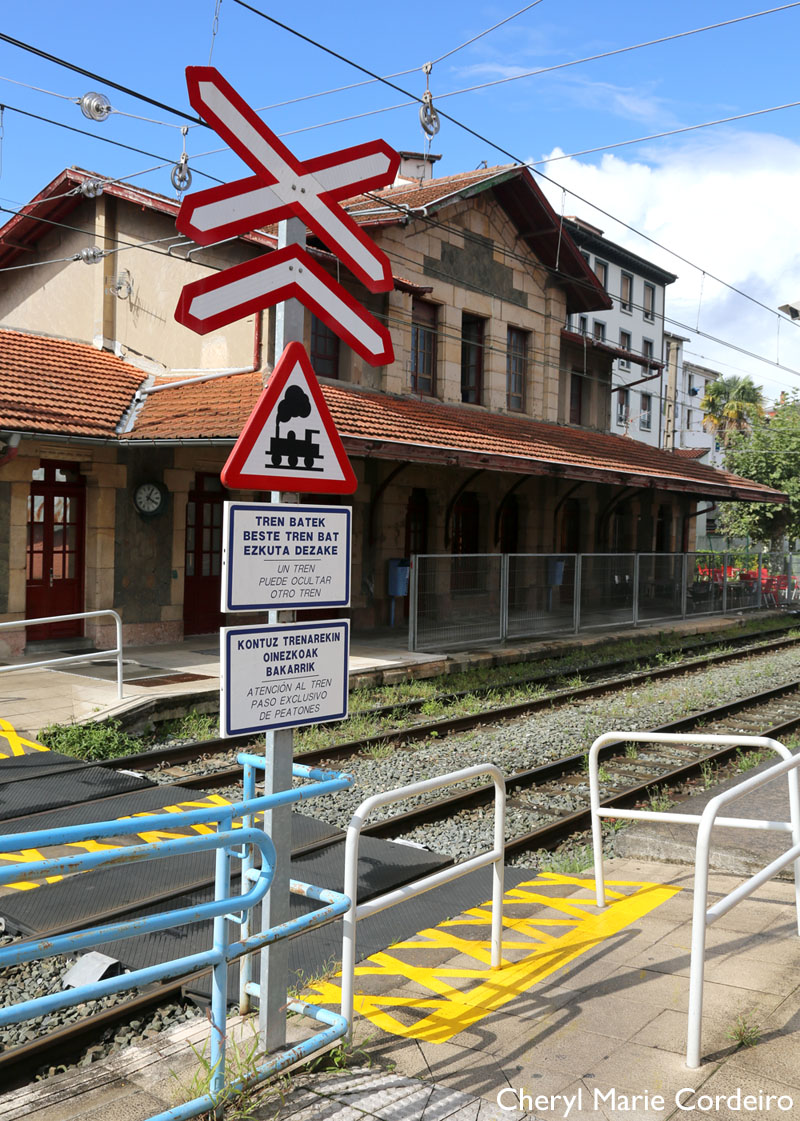