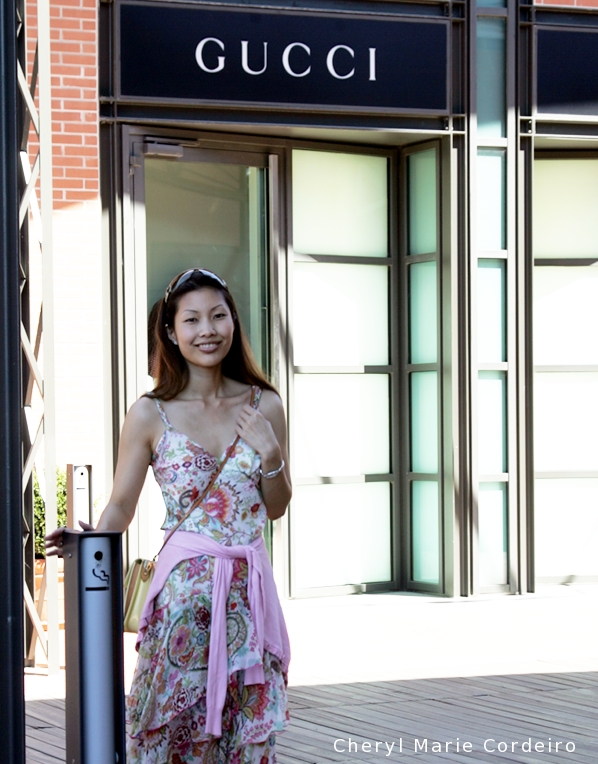 Italy is really everything that has ever been written and described about in its designs and designers. In a world of ever increasing low priced and sloppily made consumer goods, the attention to design detail and craftsmanship in Italy is a breath of fresh air. Perhaps it is something with the stubborn and highly individualistic Italian mind-set that just can’t take orders and insists on doing things their own way – down to the local village cheese preparation – that feels just right applied to the making of clothes and accessories. “The Mall” is located just 30 minutes along the A1 motorway from Florence. A Gucci mecca of sorts, The Mall at Leccio, hosts several luxury brands.

In combination of urban and country, with its soft rolling hills in the region and beautiful vineyards, I’ve found Florence also to be a shopping haven for things well-designed. An ill protected secret is the availability of numerous factory outlets who away from city centers, sell the real deal at discounted prices. And if you are prepared to venture outside the extreme first class locations in the city centers, such as right outside the Palazzo Veccio in Florence, your efforts will be richly rewarded with hefty discounts on luxury items. True shopping gems, if you find them. 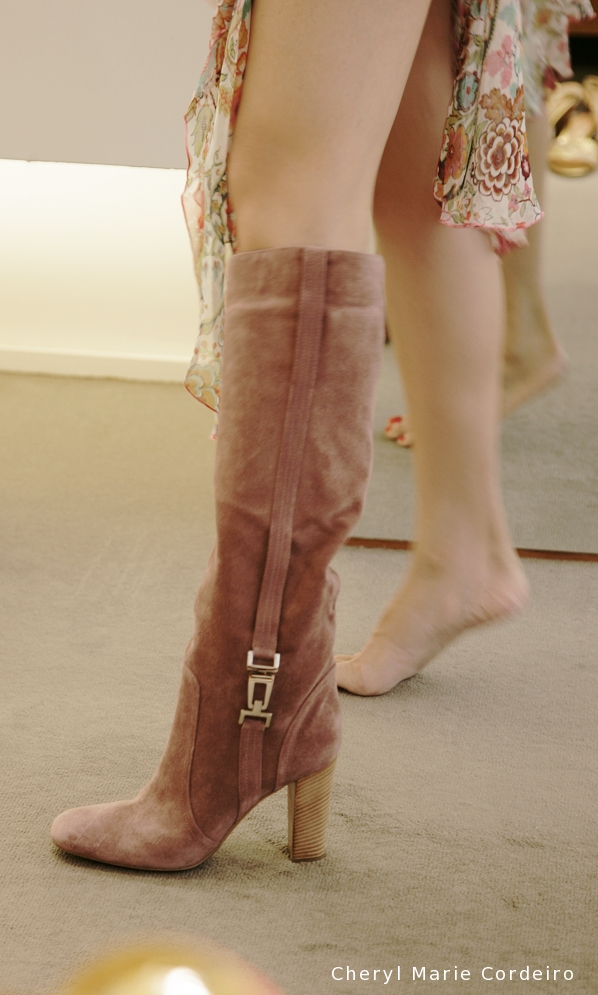 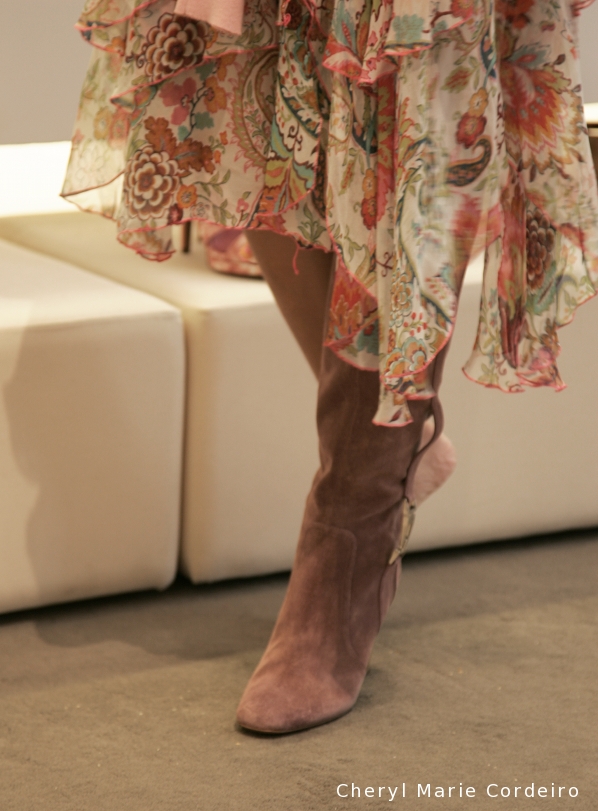 The rose suede boots looked good at almost any angle. It took me awhile to get out of them and place them back where they belonged – on the display shelves.

Formerly, Italian factory outlets catered exclusively to employees in the branded goods industry, making luxury goods available at a discount to their own staff. Back then, personal introductions and a lot of hush-hush went into shopping at these outlets. Today however, outlet shopping has become a part of the vast tourism industry in Italy, complementing its historical sites when planning tours and stays.

The Mall at Leccio is also known popularly as “The Gucci outlet”, because of the central and large Gucci shop it hosts. You literally wade through, elbow-deep in Gucci products all breathtakingly gorgeous regardless of function at a fraction of their original retail prices just one season ago.

Like Charlie in the Chocolate Factory, this Gucci outlet is an absolute dream place to land in for Gucci fans and shopaholics. Personally, it took a Herculean effort on my part to pull myself together and continue to explore the other outlets that included Alexander McQueen, Armani Jeans, Balenciaga, Bottega Veneta, Burberry, Fendi, Giorgio Armani, Hogan, Marni, Pucci, Salvatore Ferragamo, Sergio Rossi, Stella McCartney, Tod’s, Valentino, Yohji Yamamoto and Yves Saint Laurent outlets to mention just a few.

I landed myself a few doors down from Gucci, in Sergio Rossi. Apart from the ravishing suede boots in rose from Sergio Rossi, I swept across this pair of eye-catching gladiator heels! 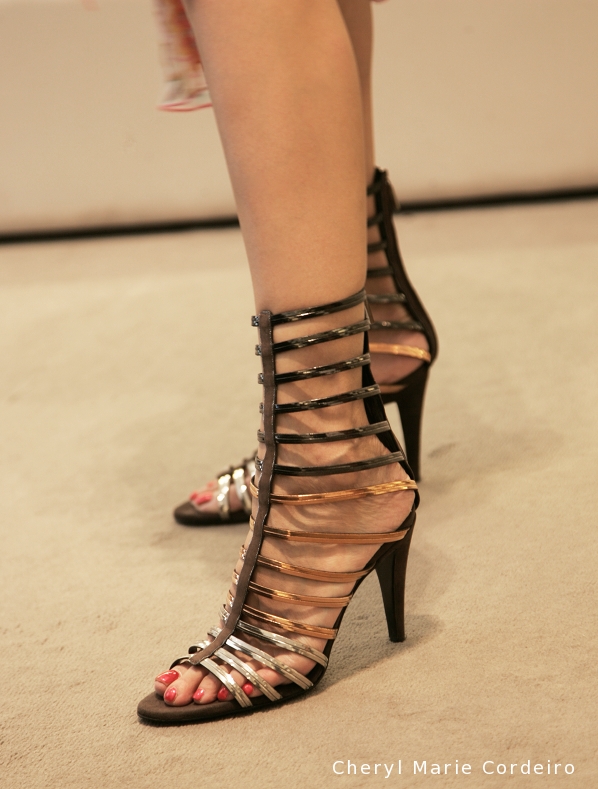 Now these are some fashion statement! Instant love!
It was admittedly difficult to limit all these ‘instant loves’ at The Mall. 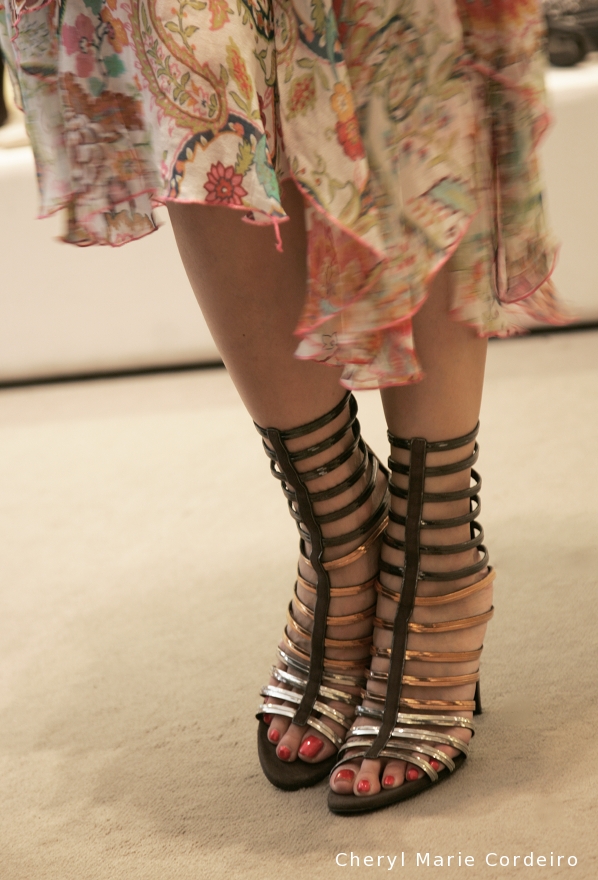 Who wouldn’t want to have these to a tropical barbecue by the beach in Singapore?

As the shopping grounds were so vast, it took quite an effort in coordination when shopping with a group of friends. An odd but humorous situation arose in which we found ourselves hunting down each other in order to get opinions on products. In one instance, my girl friend burst into the Valentino outlet, panting. She wanted an opinion on a Fendi bag, so she had crossed at least 300 metres of ground and walked in and out of several shops before finding me. And I was absolutely dismayed when I found out that Fendi was ‘across town’ of sorts because I wasn’t quite finished with Valentino. By the cool water fountain and pond. A little respite from the sweltering heat. The Mall is a purposely built small city, located on a former vast farmland. Depending on which spot you find yourself, the place can be serene in spite of the backdrop of shoppers anxious and in a hurry to get the best deals.

As shopping can take hours, the complex also includes a café restaurant called Dot Com, where reluctant husbands and boyfriends coerced into the escapade may retire. Actually, that was also where I found myself soon enough, after flitting between the various boutiques. A plain bottle of water, was much appreciated. Of course the discounts you can have here as compared to the shops in prime location comes with some kind of conditions. For some companies I feel it is just a question of price differentiation of the same products as are actually found elsewhere. It is also worth noticing the absence of some of the big players. For the top brands that are present, the product models might be from the past seasons and you will not find the full array of sizes and colors. You will find at outlets that these are mostly indeed the seconds and the left overs, but sometimes the leftovers – at half price – might be just the right thing anyway, since good designs tend to survive the ethereal temperaments of fashion.

5 thoughts on “The Mall at Leccio, Florence, Italy”

Views from a Gondola