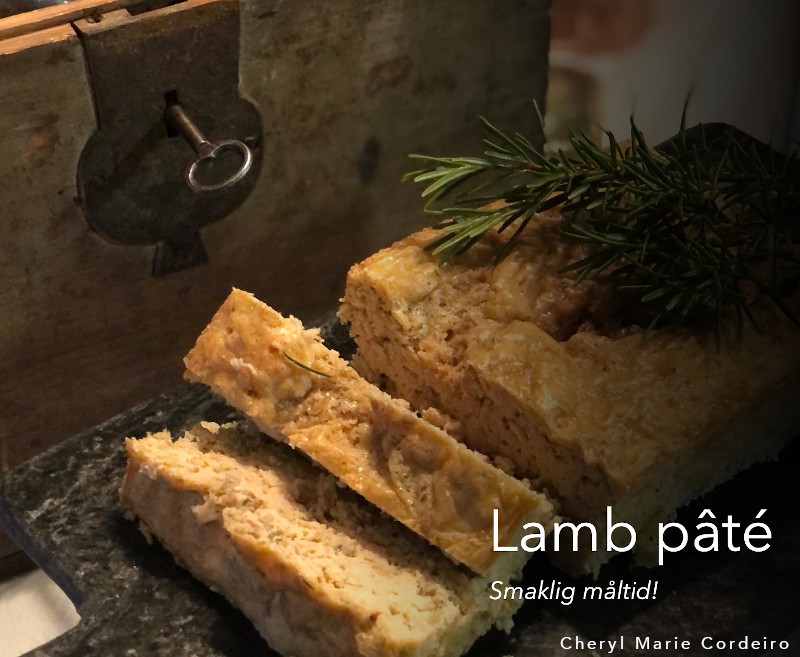 It has been just about a year since my pork rind bread bake.

Spring is upcoming in the Nordic region, and lamb often ranks high on the Scandinavian food list associated with spring. Together with some wild meat cuts such as reindeer and elk, I have in my freezer, a few neat packages of lamb mince. I thought to make a light-textured and crumbly version of a meat loaf, with most of the flavour coming from the type of meat combined with eggs. I was curious to see if the desired texture could be achieved because lamb mince has a higher fat percentage.

So it was 400g or one package of lamb mince, and about 5 medium sized eggs. The egg whites and yolks were separated, and the egg whites beaten till they formed stiff peaks. The mince of lamb was seasoned lightly with salt, and some Herbes de Provence. The last step is to incorporate the egg whites, folding gently into the meat and egg yolks. The batter was put into the oven at 175 deg C for about 45 minutes.

Once cooled, the lamb pâté or lamb loaf can be cut quite easily into slices. I turned to my food taster and asked, “So what do you think of it?”, “It tastes and feels like a failed sponge cake.” he replied, scrunching up his nose and shaking his head. Super! Success! I thought.

The lamb pâté / loaf did indeed turn out crumbly, with plenty of air bubbles trapped between the minced meat. The loaf keeps well in the refrigerator, and can be used as slices of bread or a meat sponge cake when plating. You can top this with anything that is complementary in flavour to lamb and eggs, as long as it is mintgelé.