I´m often up for trying new recipes. Since about two years ago, I began experimenting with keto and carnivore recipes for breads. I tried some crisp bread made only with nuts and seeds, and some softer loaves of bread baked with black sesame seeds, using some psyllium husk to hold moisture in the bread. I liked the variation of texture and flavours of the resulting breads, and continued to keep an interest in keto and carnivore recipes.

In this baking experiment, I used 3 ingredients to make this pork rind bread that includes ground pork rinds (or pork panko), egg whites and Herbes de Provence. Herbes de Provence is one of my absolute favourite herb mixes to use in cooking and baking. It´s an aromatic blend of herbs that includes rosemary, thyme, basil, tarragon, marjoram, oregano, and bay leaf. I have these herbs on top of most everything right now, from flavouring butter, to using when roasting duck and lamb.

The ratio of pork rinds to egg whites is about 1 to 1. I added a pinch of salt to taste. There are many variations of carnivore bread recipes to be found. Some recipes include finely ground poultry or pork, and whole eggs, whilst other recipes use only whisked egg whites and egg white powder (cloud bread sans sugar). My current favourite thing to make is custard in different flavours, so all my egg yolks go into custard making these days. Which left me with using egg whites for this bread. The egg whites were whisked stiff, the ground pork rinds and herbs mixture was then folded into the egg whites. The batter was poured into a bread pan and baked at 160 deg C for about 45 minutes.

The texture of this pork rind bread is spongy, the slices toast well, and the bread holds firm for spreading butter and pâté. The flavour profile of this bread can be described as ´bacon and egg´. The last time I indulged in crispy pork rinds was when I was about 8 years old, so for the moment, I´m floored for anything salty pork rind and Herbes de Provence. This bread tasted good.

I´m already thinking about baking this bread with other flavour profiles. Cinnamon and cardamom for that Swedish cinnamon roll up next? Maybe. 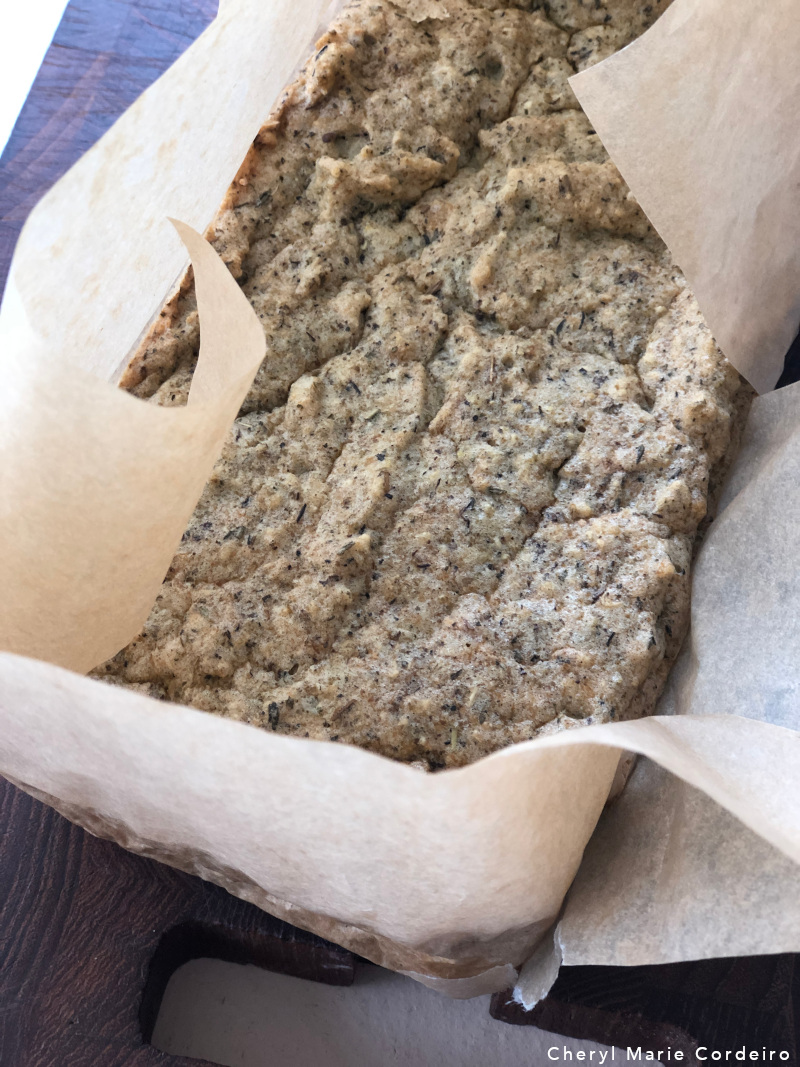 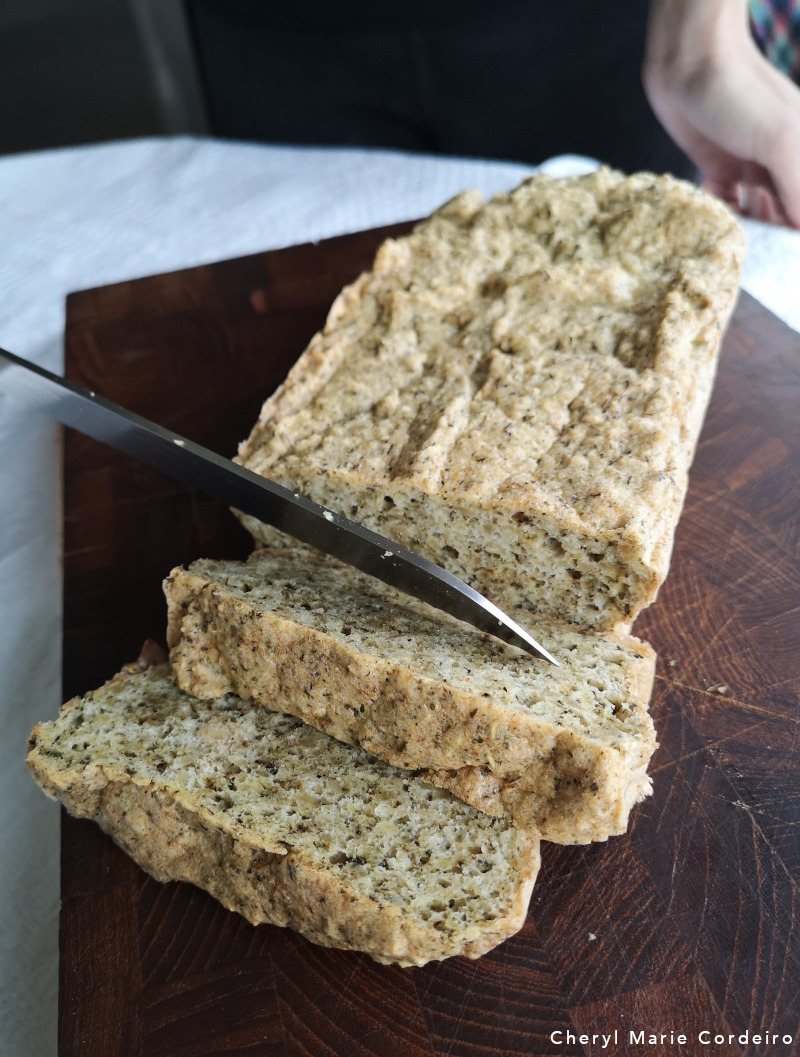 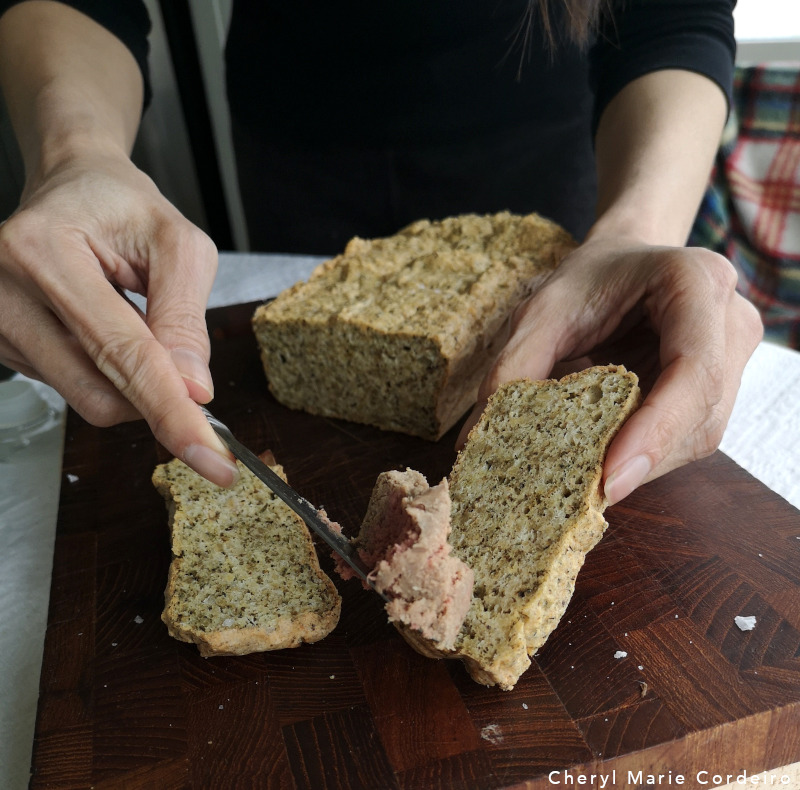 Spreading some chicken and duck liver pâté on the pork rind bread. 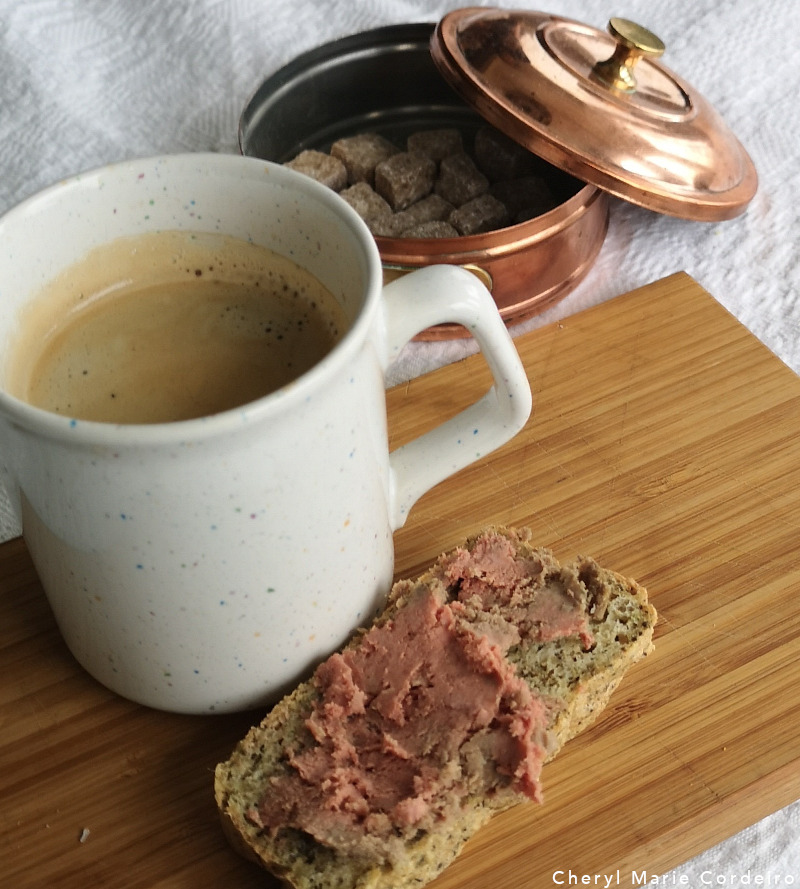 A cup of coffee, and breakfast is served. The flavour profile of this bread is ´bacon and egg´. I resisted the urge to top off the naked pâté spread with Herbes de Provence.