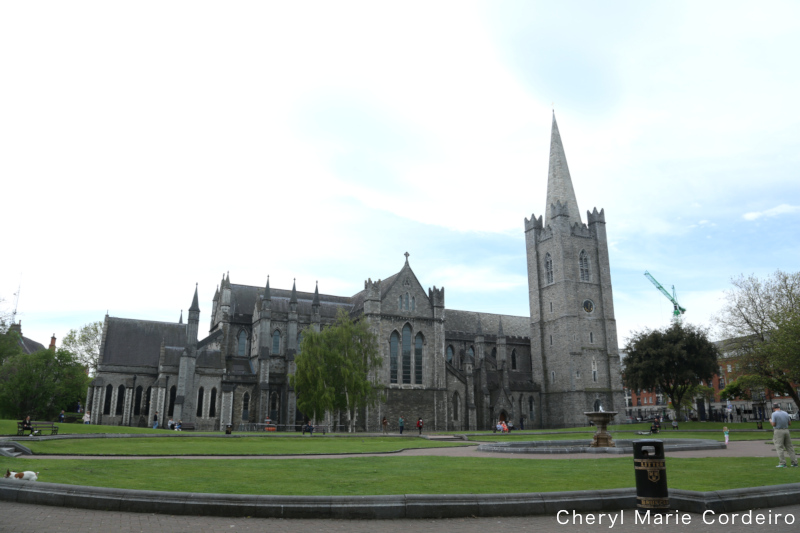 Saint Patrick’s Cathedral in Dublin was founded in 1191. This was just after the Viking period (800 to 1066) and in parallel with the Chinese Song Dynasty era (960-1279). My system was trying to recover from this step through of a time warp from 2019 into an arena that was built about 1000 years ago, when not a few meters from entering the cathedral, I turned right and was accosted by a cast of the skull of writer and satirist Jonathan Swift, author of Gulliver’s Travels written in 1726.

I totally enjoyed the book when I was a child, but that had not prepared me in any way to meet with the hollowed out eye sockets of the author, sitting in a glass cabinet. Swift was Dean of St Patrick’s Cathedral from 1713 to 1745. Oh.

This would be the second Saint Patrick’s Cathedral I have visited. The first was in New York City, USA, in 2008. It was just across the street from Rockefeller Center. It was built in neo-gothic style and is considered a landmark in New York. Saint Patrick’s Cathedral in Dublin is sturdier constructed in Gothic style. Some of the stained glass windows depict the life of Saint Patrick, even if little is known about his actual physical appearance. Saint Patrick is credited with bringing Christianity to the Irish people, and is the patron Saint of Ireland. Both my father and brother, coincidentally, grew up in Saint Patrick’s boys school in Singapore. My father was in fact also the secondary school’s Vice Principal during the days I was student at CHIJ (Convent of the Holy Infant Jesus) Katong, Singapore. In that sense, Saint Patrick has always been a part of my life.

As with visiting many places of worship in years past, the Chartres Cathedral in France comes to mind, I am awestruck by what human ingenuity, science and collaboration can do if and when we put our minds and hands to it. This building is a fantastic work of architecture in myriad layers of artisan details. A tangent incident and my favourite exchange from when in this cathedral was of a visitor, pacing the corners of the gift shop trying to find his way out of the cathedral. He asked the security guard, “Excuse me, but where is the Exit?” The security guard pointed at a green lit Exit sign, “You can go out through there.” “No” said the visitor, “You can’t. I just tried that” I looked at the visitor and smiled and said, “I’m afraid you can’t get out of this place. You’re stuck here forever until you buy something.” The security guard who shared no sense of humour with me, pointed straight ahead (a different direction than the first time) and said, “You can get out through there.” I thanked the security guard for the directions, because I too, could not find my way out of the cathedral. I tried. And yes, I would’ve brought home with me, a souvenir from the cathedral. 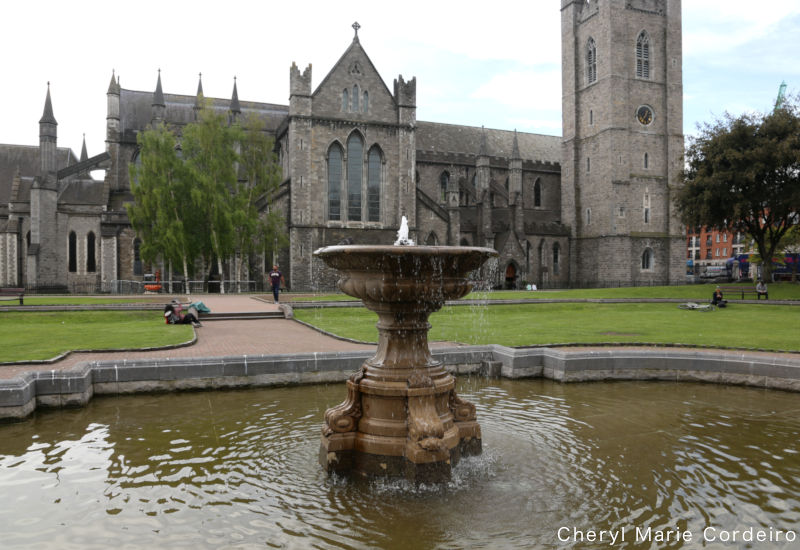 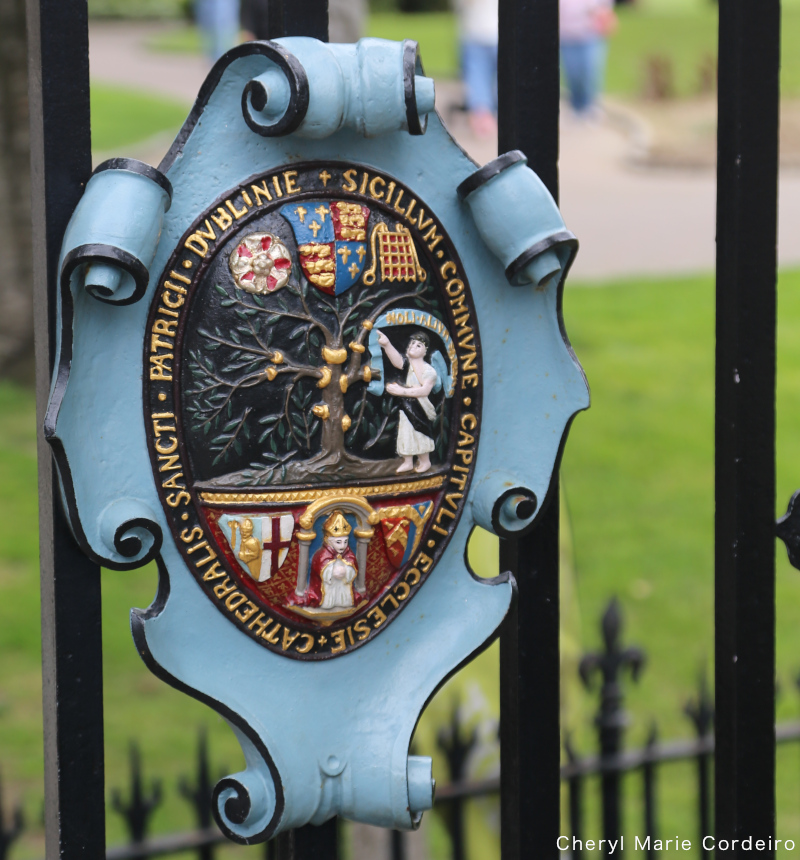 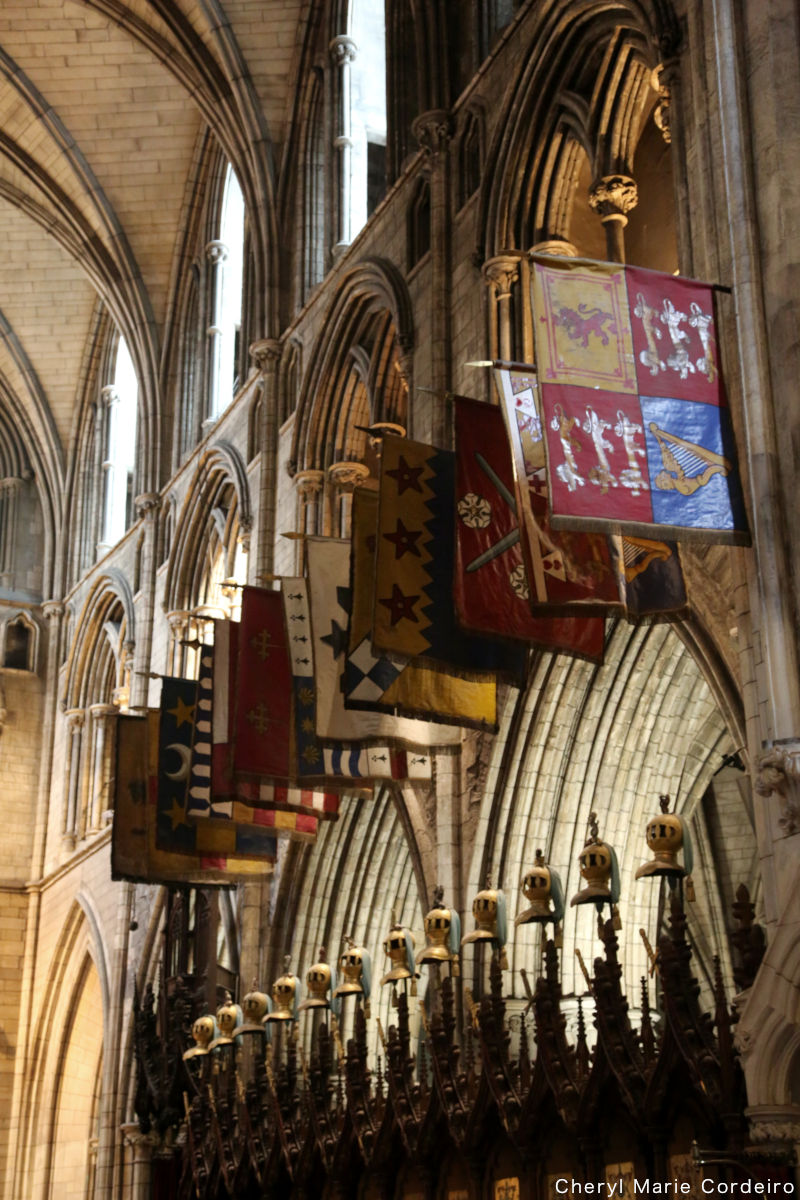 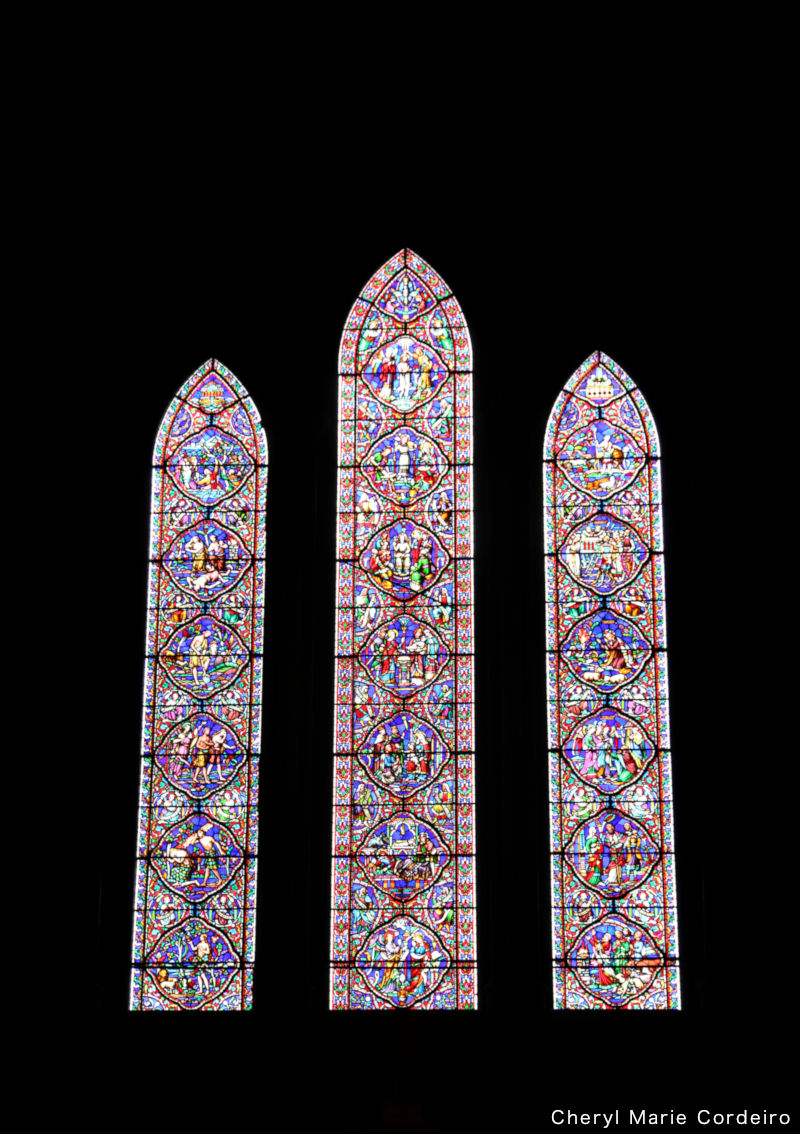 Stained glass depicting the life of Saint Patrick in 39 different images. In a narrative indicative of the depth of Irish Christian faith, a video produced by the cathedral states, “there are three statues of Saint Patrick in the Cathedral / the first is a small statue made by the Irish artist Melanie LeBrocquy / the second is in a glass case and was donated to the Cathedral in 1991 / and unfortunately we know very little about its history / the third statue on the wall of the south transept is actually made up of three different parts the head is from a 17th century statue while the body is part of a 13th century effigy of an archbishop / the base is probably part of an old pulpit in the cathedral they were most likely pieced together at the time of the Guinesss Restoration / exact details of Saint Patrick’s life and death will probably never be known / although he is thought to have died in 460 AD and buried in Downpatrick.” [1] 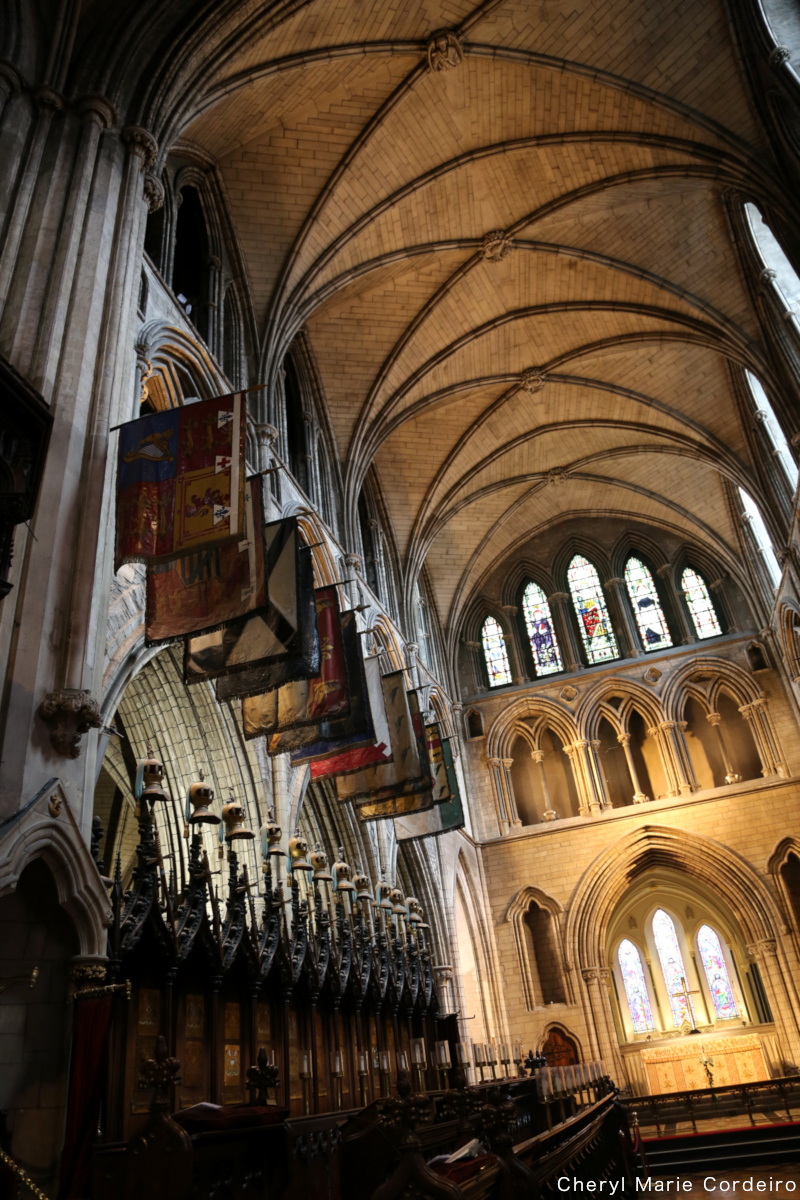 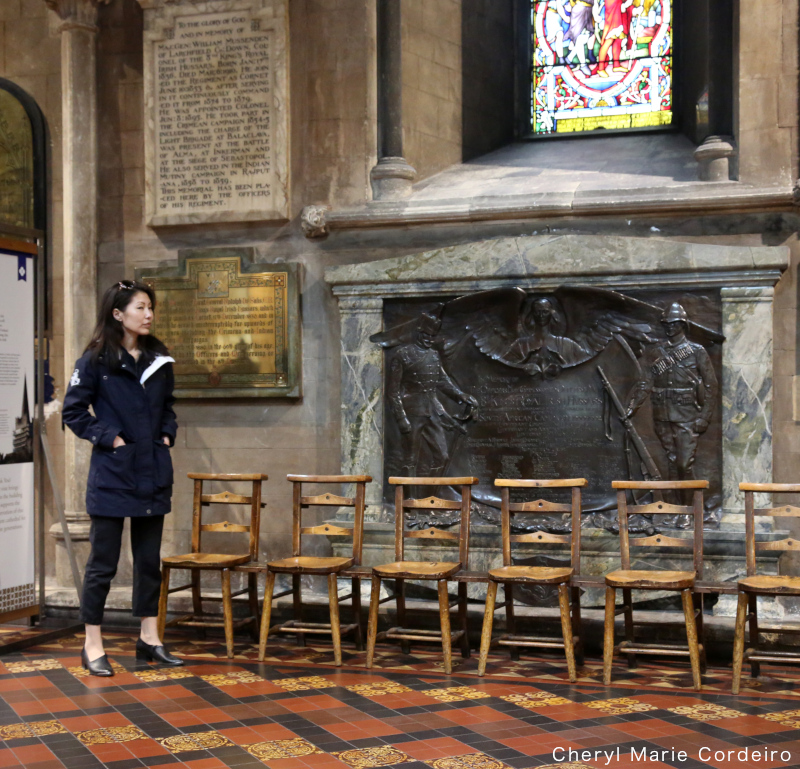 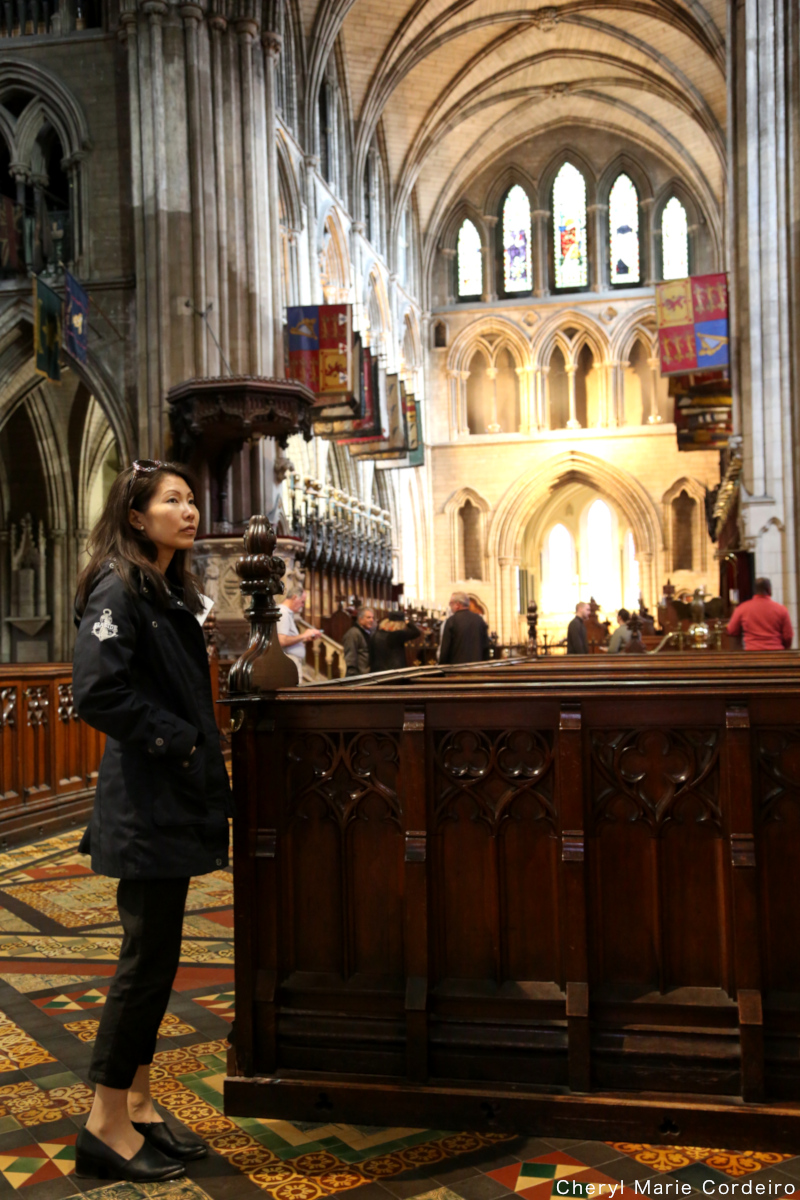